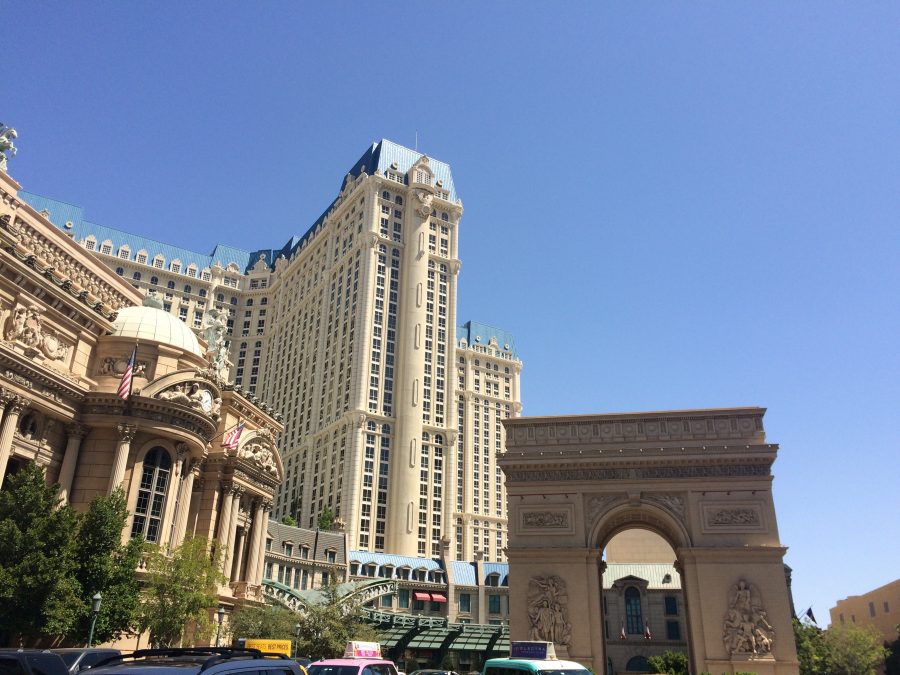 We stayed at the Delano, a hotel that shares property with the Mandalay Bay Resort. It was down at the far end of the strip, which turned out to be quite a good choice, as the only people that were really at the facility for our particular hotel were those staying there. I would later learn hotels along the strip get quite a bit of through traffic and would have been far to overwhelming for me.

The hotel was incredibly nice, we wound up with a two room, two bathroom suite. King sized bed, couch, two televisions, and a few of the mountains (across the way from the airport). It was impressively decorated in a more natural theme that some of the other hotels, with lots of natural stone, wood, darker colors and soothing music. It also had an incredible roof top restaurant that we ate at as well as a delicious brunch place right in the lobby.

As I just mentioned we ate at the Rivea which is at the top of the Delano hotel on the 64th floor. It has sweeping views of the entire city and offers up incredibly good Mediterranean style food. The space is also occupied by the Skyfall bar, a very chic place which we were planning on trying but to our surprise we got seated for dinner right away and never got the chance.

In the lobby of the Delano as you walk toward the Mandalay Bay casino floor there is a quite little place called Dela’s kitchen which is where we ate breakfast at one of the mornings we were there. If you like a buffet, and you like breakfast I highly suggest the Bayside Buffet. And our other favorite was Citizens Kitchen and Bar, they have amazing burgers and sandwiches.

Since I don’t love gambling or partying you would think there wouldn’t be a lot for me to do. But over the years as populations have changed, and more people have started taking their kids of Las Vegas more non-partying type actives have cropped up. Unfortunately since we were only there two nights we didn’t get a chance to see any shows, but I would have loved to.

Our activities instead focused mostly on exploring. As a fan of architecture I was entirely amazing at how intricate and vast the hotels were. So on our one full day there we walked from one end of the strip to the other taking in all themed hotels. My favorites were the Luxor, which is just so wacky I couldn’t help but love it. And Paris Las Vegas, all the fake Parisian Streets and parks on the casino floor got me. I don’t know why, I loved it.

We also managed to squeeze in time to see the Mandalay Bay Sharks and spent some time poolside which was really very nice, we managed to get access to one of the adult only pools which is really a game changer if you don’t have kids with you.

We were ready to go when our time was up, tired of the smoke which isn’t impossible to avoid but pretty rampant still, as well as the bright flashy lights and loud noises every time you pass through a casino. Our 48 hours in Las Vegas ended and we hook a very nice town car back to the hotel. Sadly for us, 48 hours turned into close to 60, and was nearly an extra day as poor weather kept delaying our flight. But we made it home and can’t wait to go back.