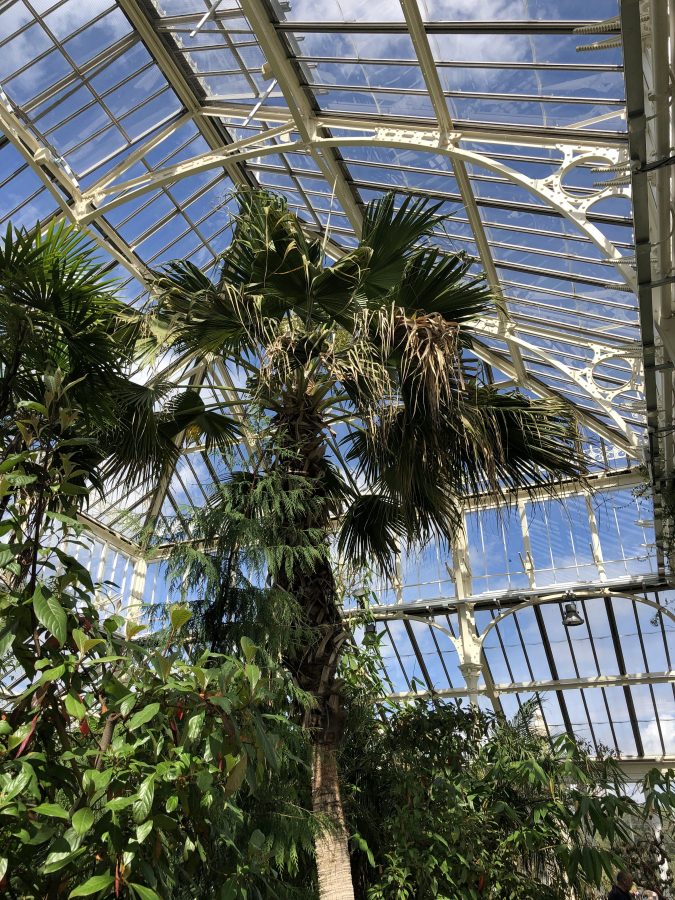 The second we decided to go to England I knew I had to spend a day at Kew Gardens. I had been reading about it for years through historical fiction, and non fiction books of various subjects. I was always fascinated by the scientific and seemingly innocent drive to collect and study the worlds plants. And how that opened up the doors for some of the most destructive advances in world trade and shipping that ultimately caused things such as the opium wars in China.

The endeavor to collect and preserve as many plant species and display them to the public officially started in 1759. But was officially founded in 1840 which is when the construction of the glass and wrought iron houses that stand today begun. Today the Kew Gardens are 330 acres of walking paths, trees, bridges both over water and in the tree tops, several historic buildings that can be toured, green houses, cafes, art exhibits and a tea house.

We got to the gardens just a couple hours after they opened but there was already a line to get in. Payment is taken at the main gates and they do take cards, which is nice because it isn’t cheap to get in. From there we were handed a map and set off on our own. We wandered around the typical sights, sort of ever searching for the desert house, which is actually the Princess of Wales house, it isn’t marked very clearly on the map what that green house holds. It also appears to be much smaller on the map than it really is. We also wanted some food but every place we stopped seemed to just be cold sandwiches from a fridge and it was a little chilly that day we were hoping for something a big more substantial. We wound up eating at the Botanical, which was very beautiful and had a great view of the Palm House but the portions were far too small for how hungry we were. We later discovered The Orangery which is where we really should have eaten.

Moral of the story, Kew is really lovely and I would certainly go back again it is big enough that I doubt you could actually see everything again. And the maps that are handed out are very helpful, but in hindsight we probably should have planned a bit better, given some of the info we wanted was not included in the materials handed out at the ticket gate.

Newens Tea House was something I found at the last minute. We were loving the tea services we had so far on the trip and wanted to have one last afternoon tea experience. The history of the place is really fascinating and I think is a must do for anyone who loves history and pastries. Allegedly King Henry 8th came across Ann Boleyn and her Maids of Honor eating this light as air tarts, when he tried them he was so smitten he took the recipe and locked it up in the castle. Time went on and in 1850 a man named Newen built the Newens Tea House at the location it is today, however it was destroyed in the blitz. It was rebuilt on the same location and sits there today as the only place in the world the makes the unique little pastries.

We had our doubts about exactly how good they were, but we went to experience the history all the same. We had some amazing Russian Caravan tea, scones and clotted cream of course. And the pastries, and oh my heavens they were amazing. If you are visiting the Kew area, I personally think this needs to be a number one spot on your list.

Kew England itself is a district within the Richmond area of London. It had its role throughout history for drawing in royals, as well as artists and even sheltering individuals during the French Revolution. Today however it is mostly just a very nice, if not very expensive residential district. The train station is quite small, and once you pop outside of it you instantly feel the drawn to the area. Small shops, tree lined streets, beautiful well kept homes everywhere you look. There is very little noise and traffic. Just a lovely quiet part of town all around.

We wound up staying at the Kew Gardens Hotel, mostly for its proximity to both the gardens and the train station. It actually turned out to be even closer than I thought. For some reason the map made it look close but still a fair jaunt, but it turned out to be no more than a couple blocks from either. The hotel was more expensive than anywhere else we stayed, but it was well worth it for us. And still probably considered a budget room.

The hotel is both a restaurant, pub and a hotel. So it can get a bit noisy at night. If you want to stay here and are a light sleeper I would just suggest requesting an upper floor room. Otherwise the rooms are updated and very nice. The dining space is really lovely and the food top notch. The rooms come with wi-fi and breakfast which in and of itself is a feast. After our long day of travel and touring around Kew I took a nice long bath in the giant tub in my room and we woke up the next day to a breakfast feast that lasted us almost back to the states.

All in all I couldn’t have been happier with our stay in Kew and if we ever make it back will likely have to repeat a day at Kew Gardens since we didn’t actually manage to see it all. We will also most certainly we repeating our stay at the Kew Gardens Hotel.