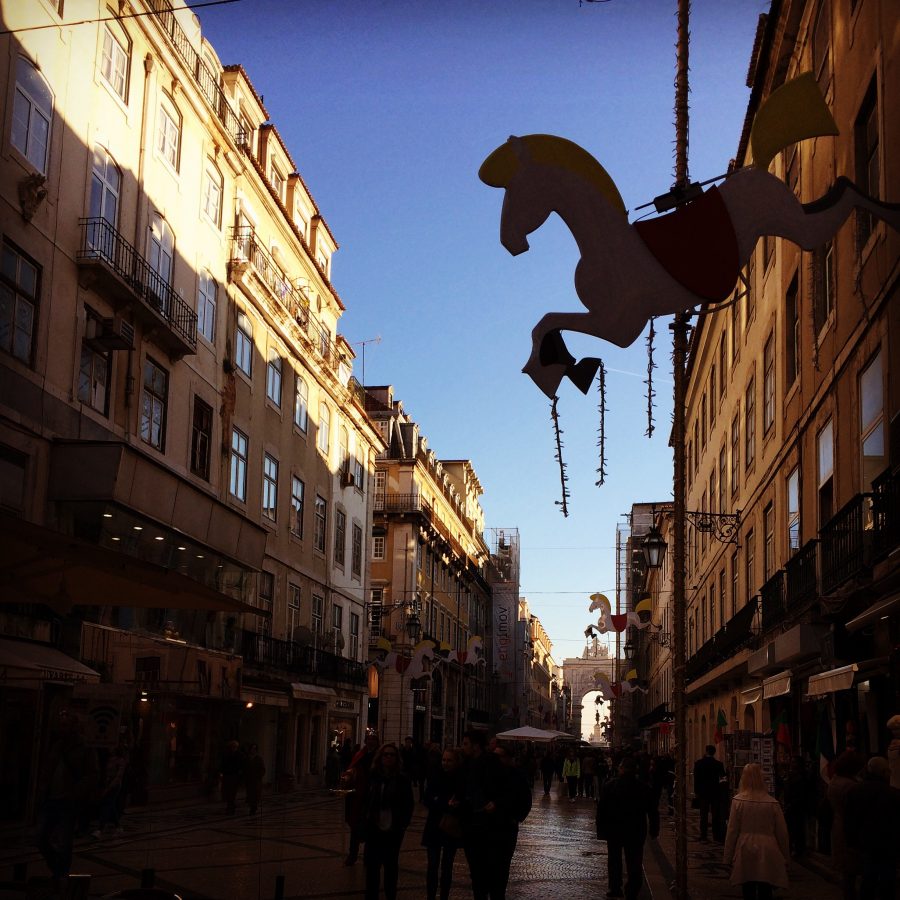 Another one of my favorites in Lisbon was the Baixa neighborhood. This is the area of town that was flattened during the giant earthquake in 1755. When it was rebuilt it was rebuilt in the “modern” style (modern for the time) and with straight roads. It is one of the only areas of Lisbon with straight roads. It reminded me a lot of the main shopping district in Vienna, though Vienna’s pedestrian only shopping street seems to be endless, where as Lisbon’s is just the right size. 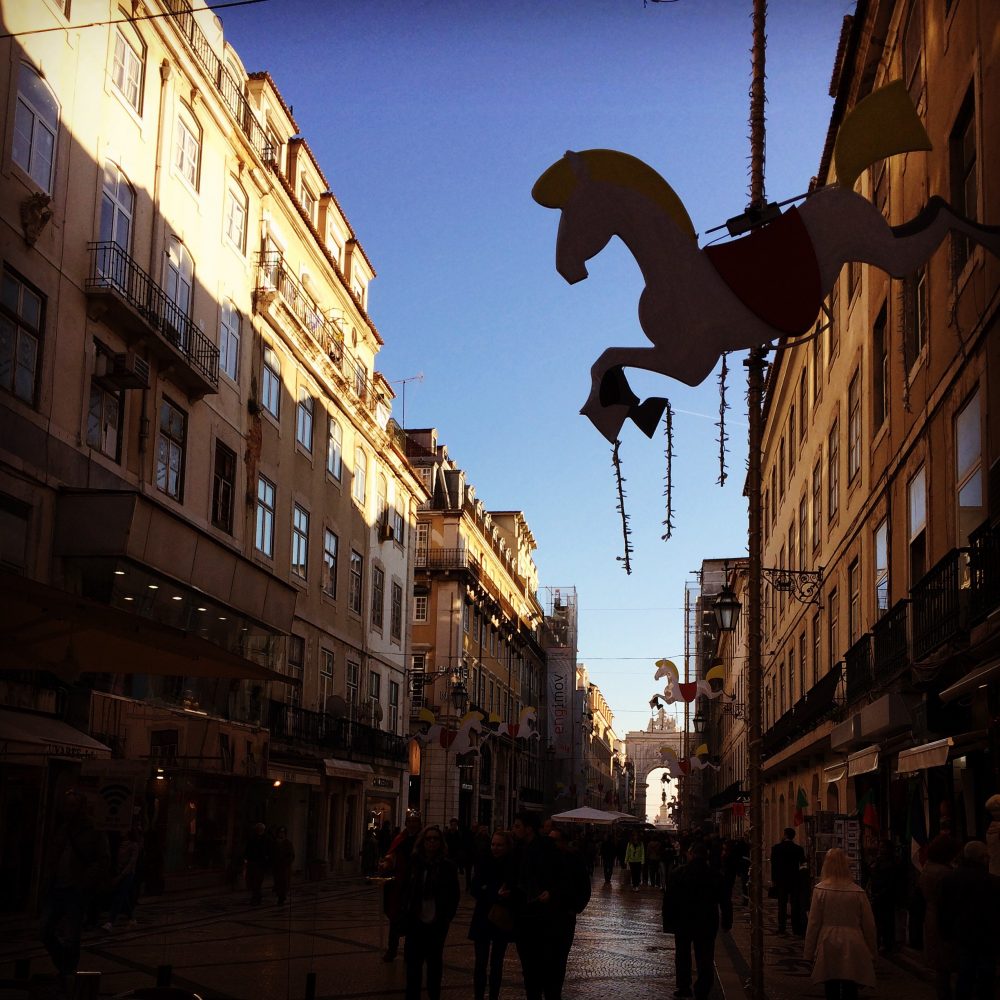 The central street is a pedestrian only street choc-a-bloc full of restaurants, cafes and shops. The side streets off the main pedestrian only space are also pedestrian only, though as you get further out more and more streets have car traffic as well. At one end you have the Terreiro Do Paço a public square on the waterfront that is ringed by cafes and restaurants. And at the other end a rather busy square that houses hotels, public transit stops and the Rossio Train Station. 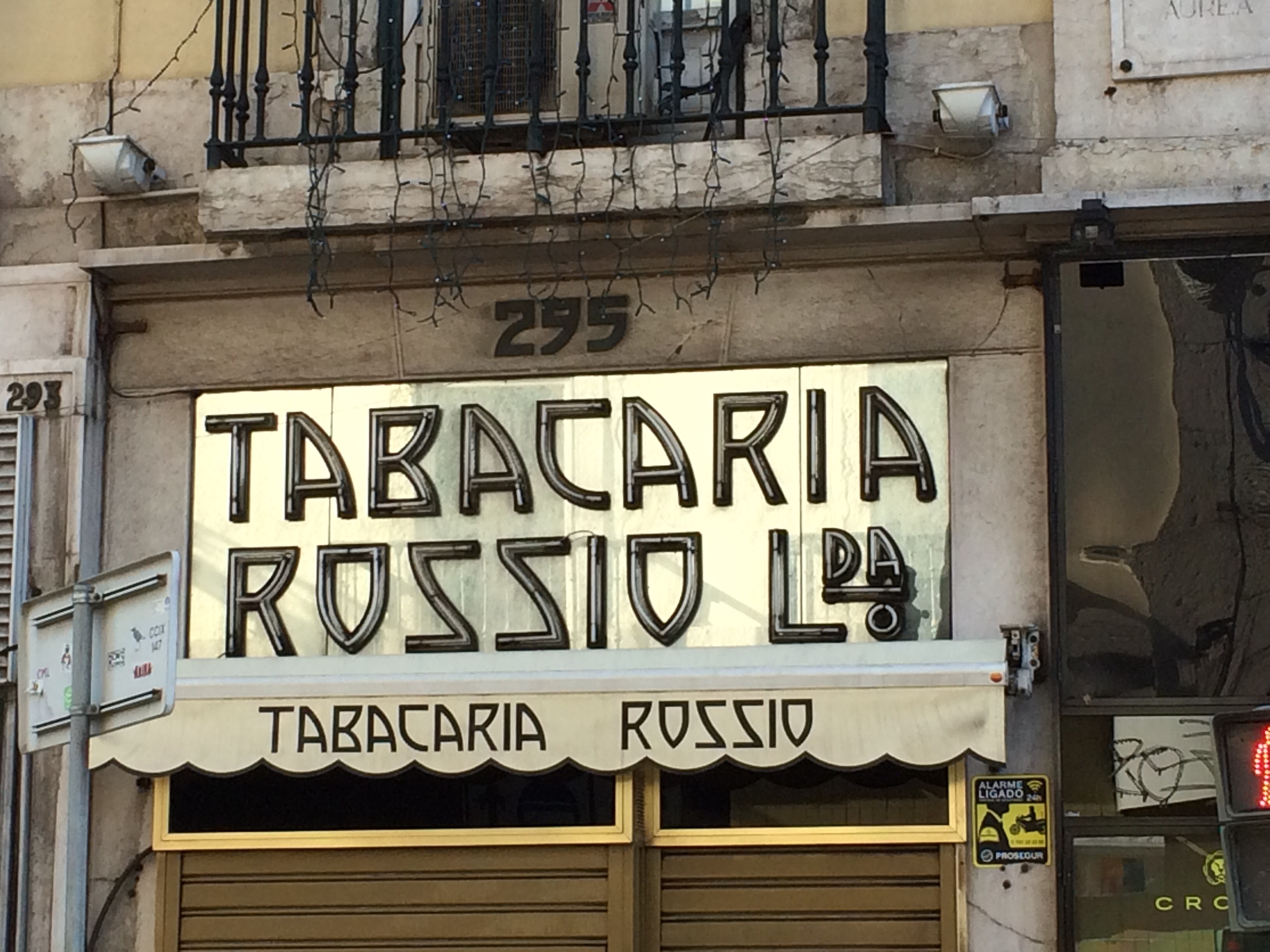 The mix of architecture in the area is overwhelming, sings from the 1920’s standing on buildings built in the 1700s and everything in between. The main square which I think may be called Rossio Square though I couldn’t find any definitive information, has a large fountain in the center and is surrounded by a stunning array of services from old shoe shops, tabaco shops, modern hotels, pawn shops, fancy restaurants, bars,  jewelers, and even a McDonalds. 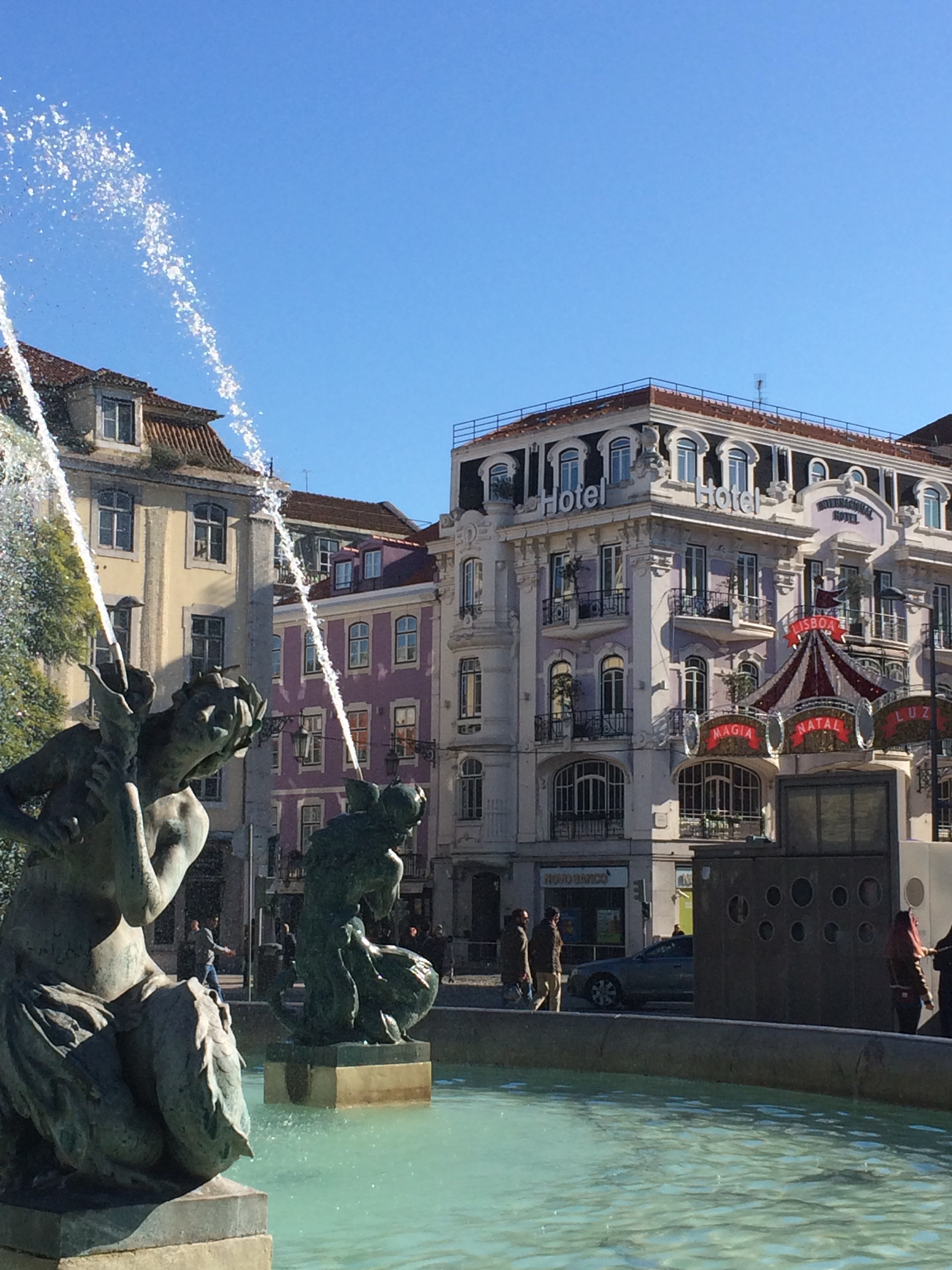 The apartments at the top of each building in the square reminded of apartment’s in Paris though I suppose that shouldn’t have been surprising given they probably belong to the same architectural time. 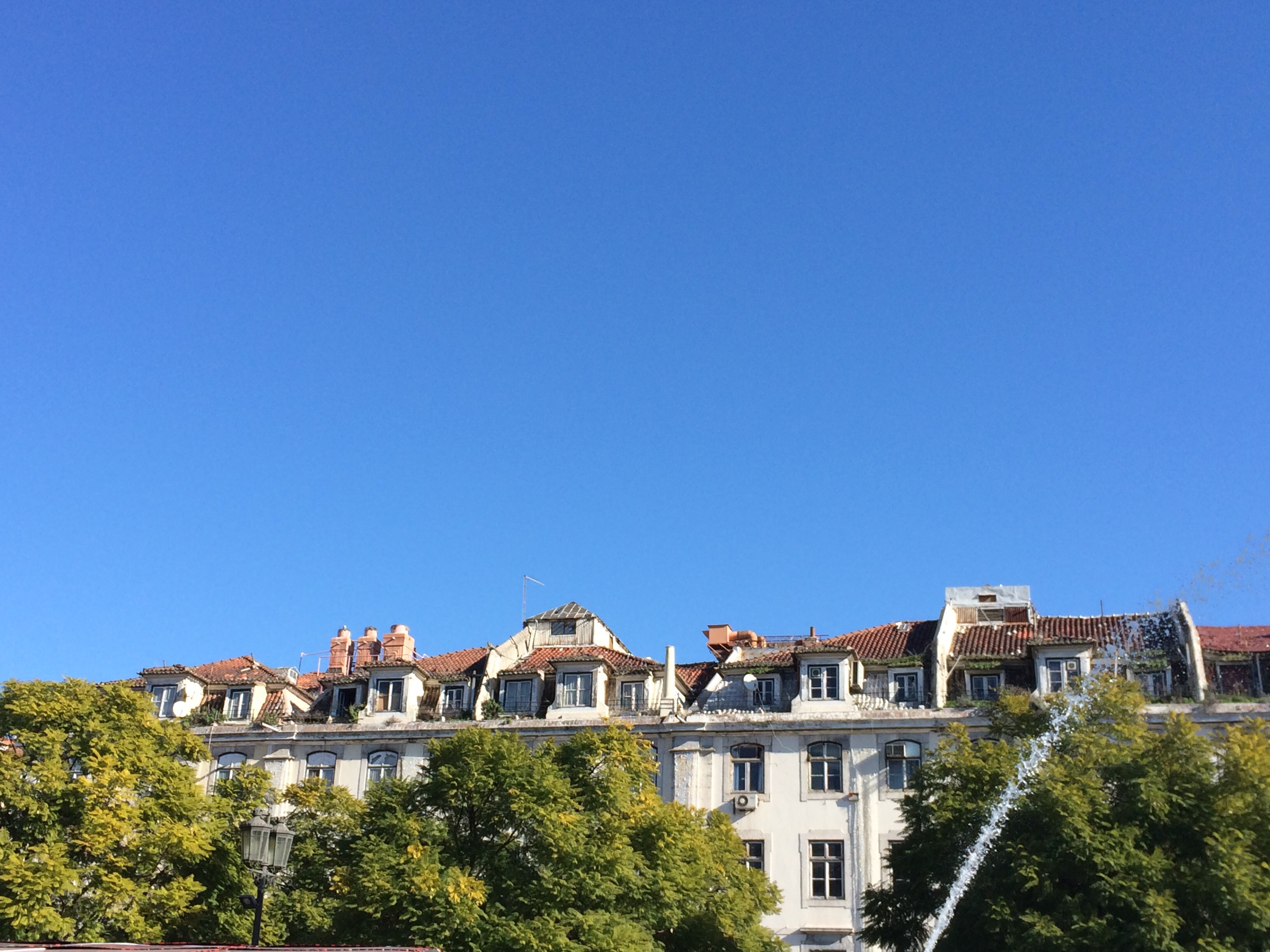 We spent a lot of time in the Baixa, it was close to where we were staying and given the time of year and that it is a fairly bustling tourist hub a lot of the services were open where other areas may not have been. There were loads of shops for me to spend my evenings wandering around in, as a non night-scene person it was really nice to have a reason to be out without all the drama of bars and clubs. There was also this ridiculously cute pug having a ride about town. 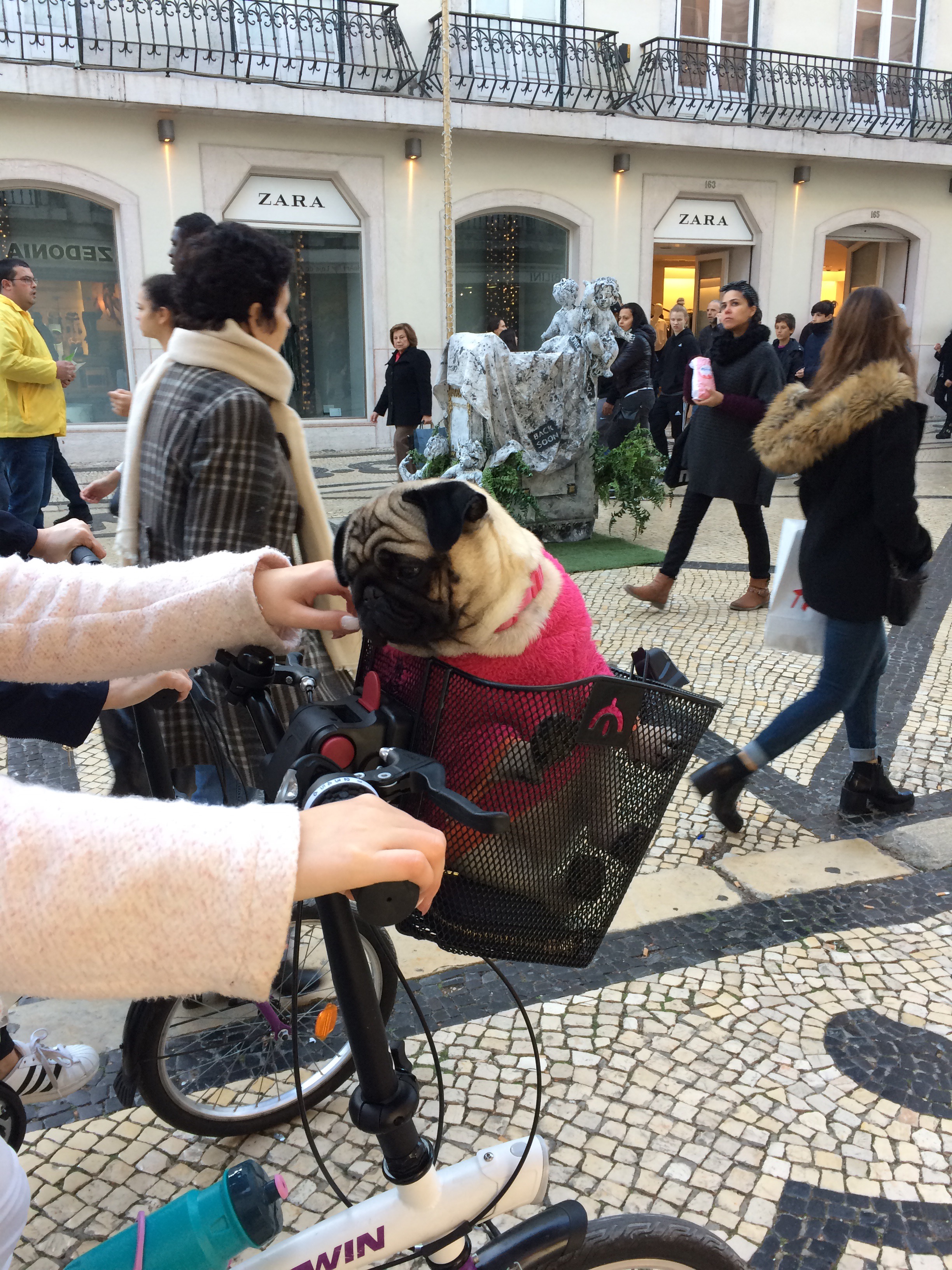 There was also several pastry shops that we visited on more than one occasion. They were crowded and frenetic and made amazing coffee. They were always stuffed full of locals and severed everything from pizza to Portuguese pastries like our favorite, Chocolate Salami. 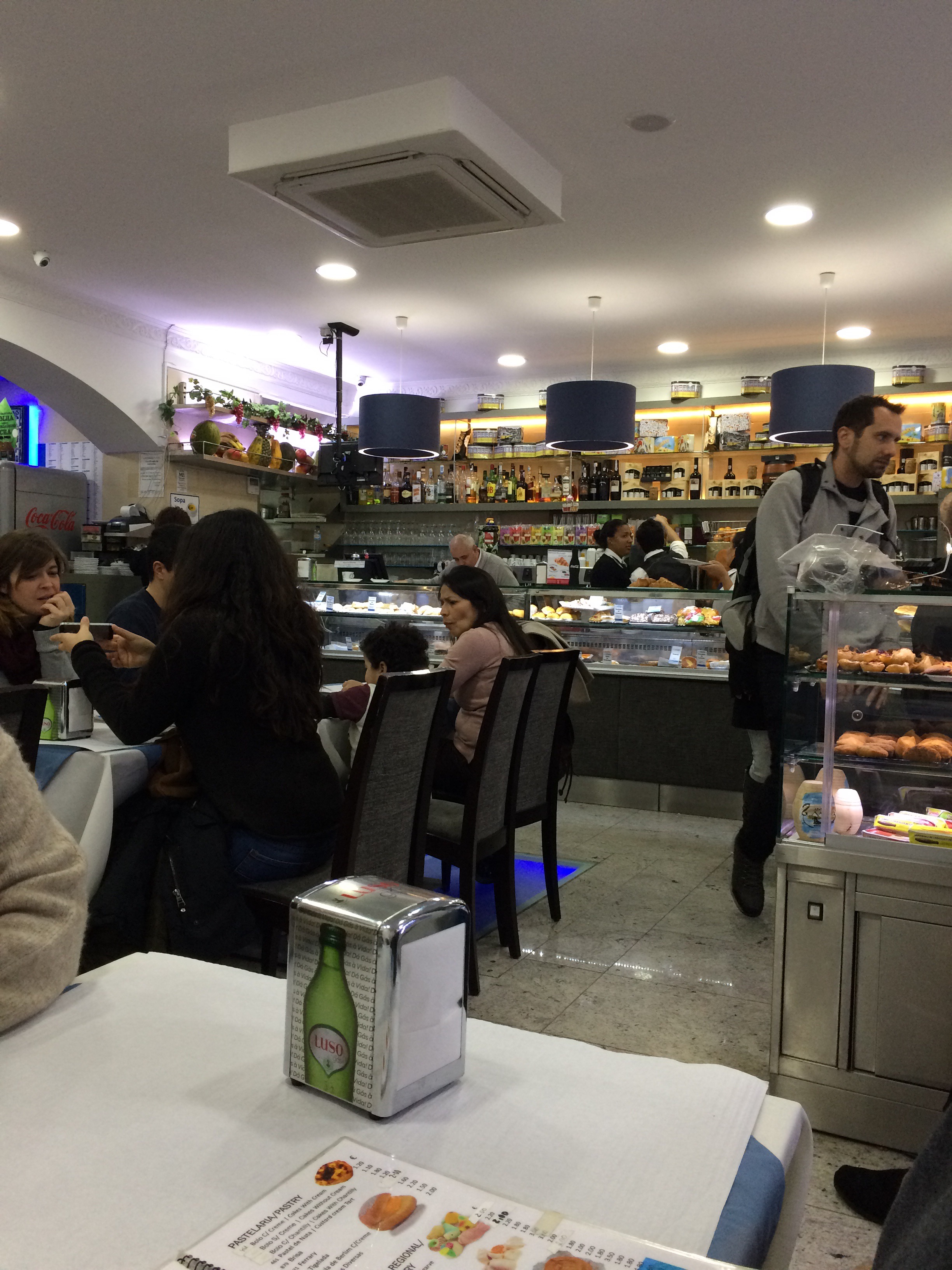 Chocolate Salami in fact has nothing to do with meat but is a chocolate fudgy dessert that is rolled up with cookies and nuts and then sliced to serve.  We ate a lot of it, and I mean A LOT OF IT. I think I probably had some everyday. Lisbon is known for the Pastel De Nata which are very good but I Chocolate Salami really blew me away. 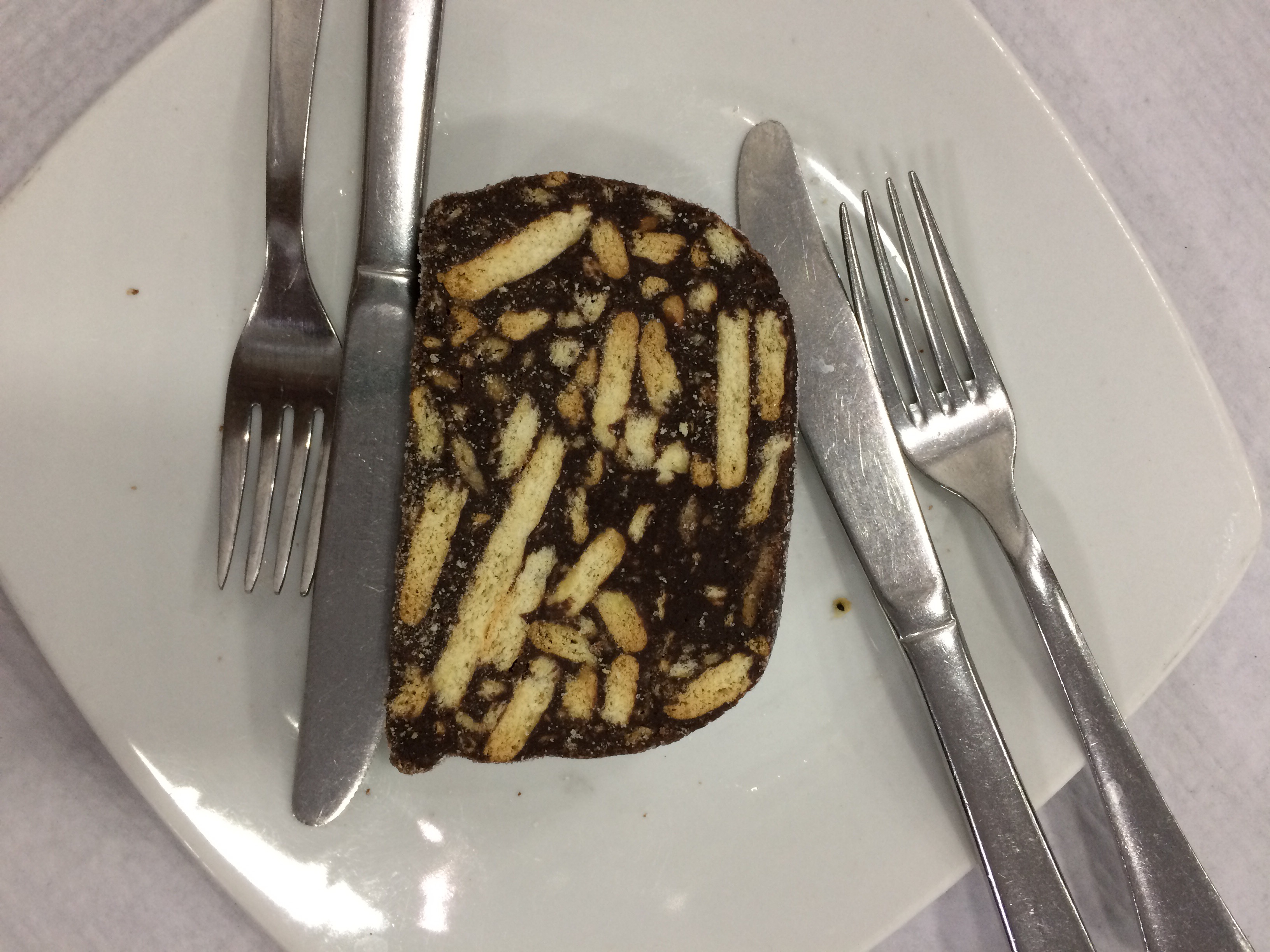 Part of the draw for me to the Baixa was the use of it in the filming of the Spanish Language TV show El Tiempo Entre Costuras or The Time In Between. Which is adapted from the book of the same name. Most of the show is filmed on location in Moracco and Madrid but the later part of the story heavily highlights Portugal and Lisbon and Estoril were used in filming. 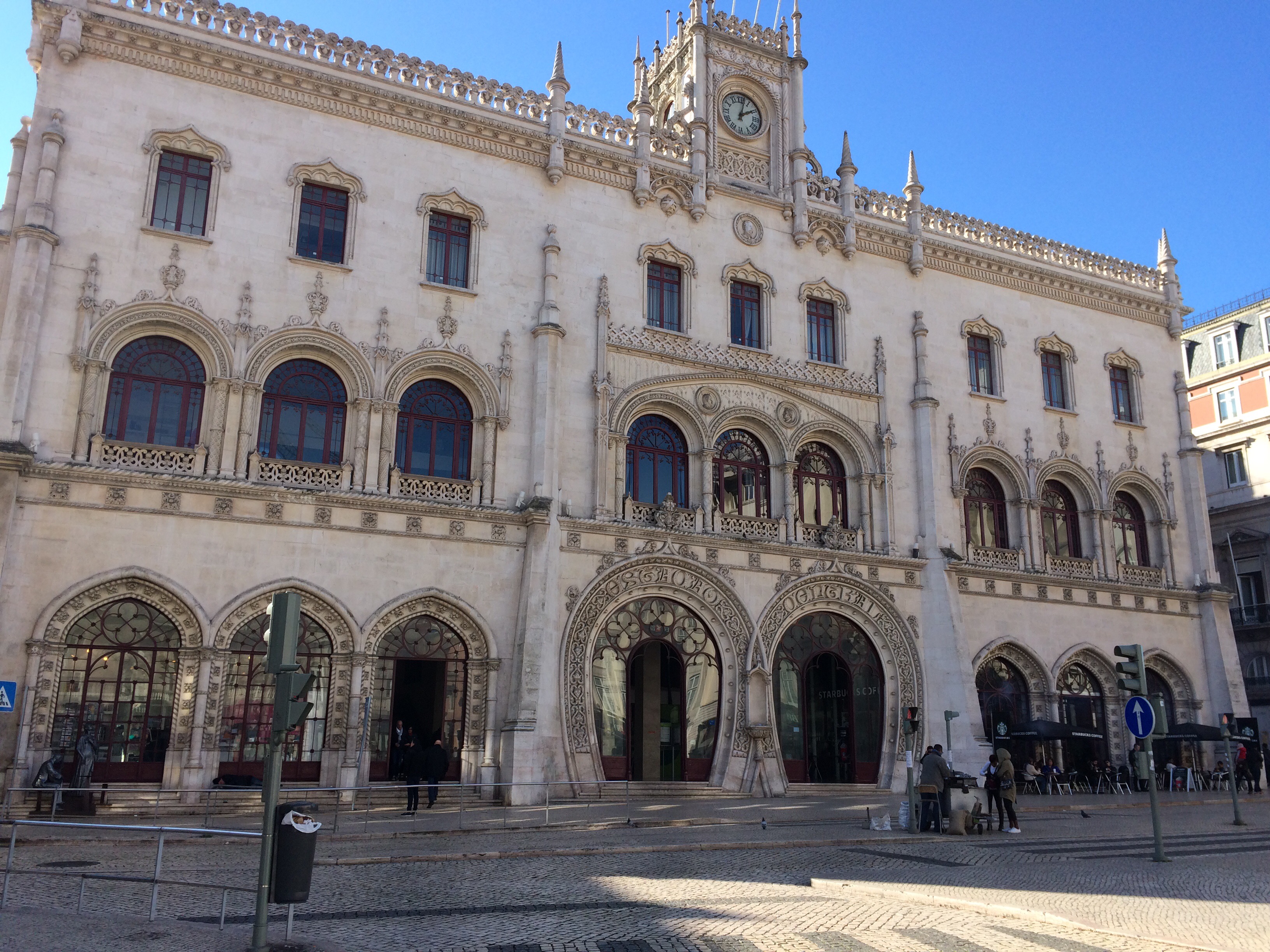 One such filming location, though technically in the Chiado district it is only a block or so down from the Baixia, is the glove shop Luvaria Ulisses which has been operational since 1925. As a lover of all things Art Deco I knew I had to go there and buy a pair of handmade gloves. The shop is so tiny there is only room for the shop attendant and one or two customers. What you see below is literally the whole shop, when you walk in there is nothing more but the small door to the closet like stockroom. But it was charming and wonderful and we all of course walked out with gloves. 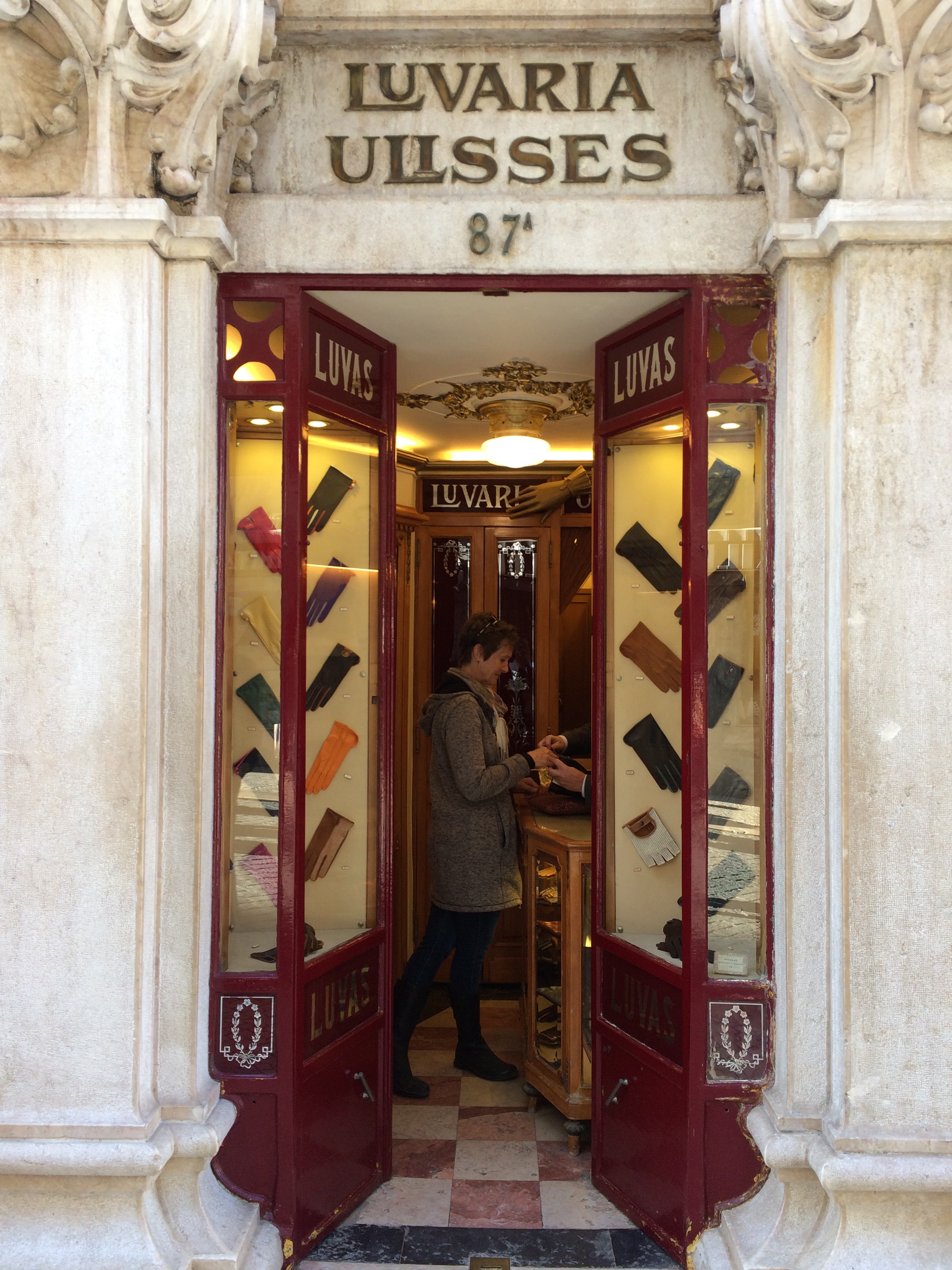