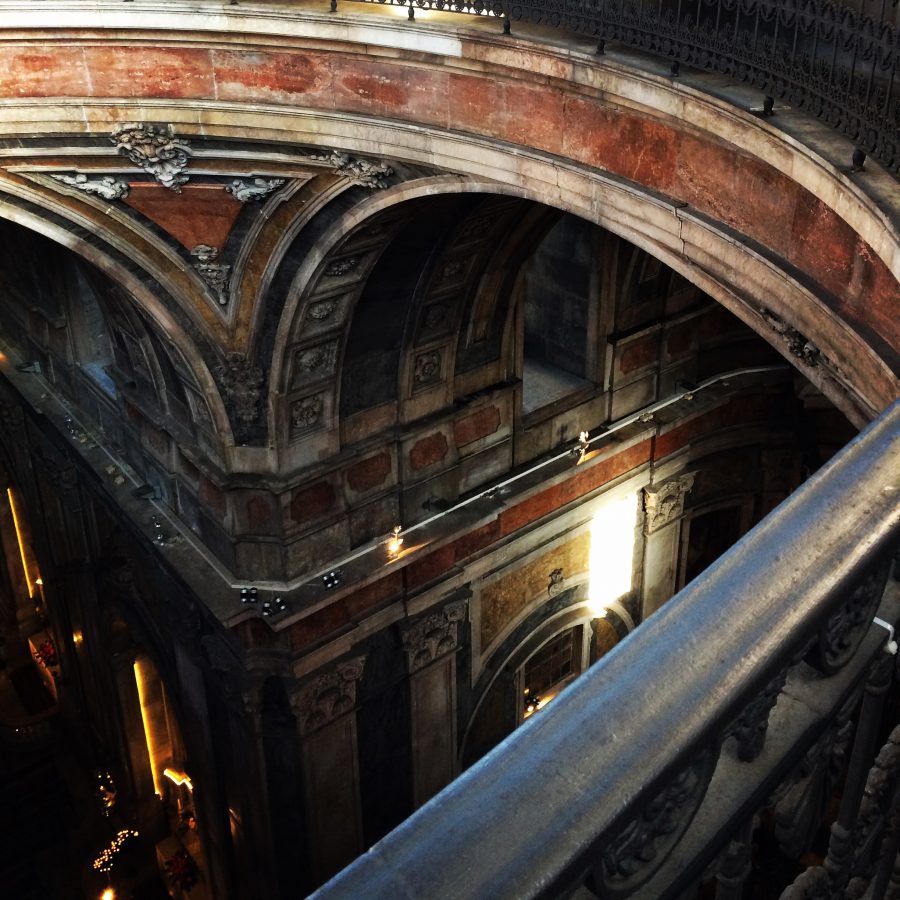 One thing that my Stepdad really wanted to see was the Estrela Basilica which was something that was not even on my radar. But I could not be happier that he drug us on the long trek (by foot) across town to visit it and I would certainly recommend it to anyone interested in seeing the top sites in Lisbon. 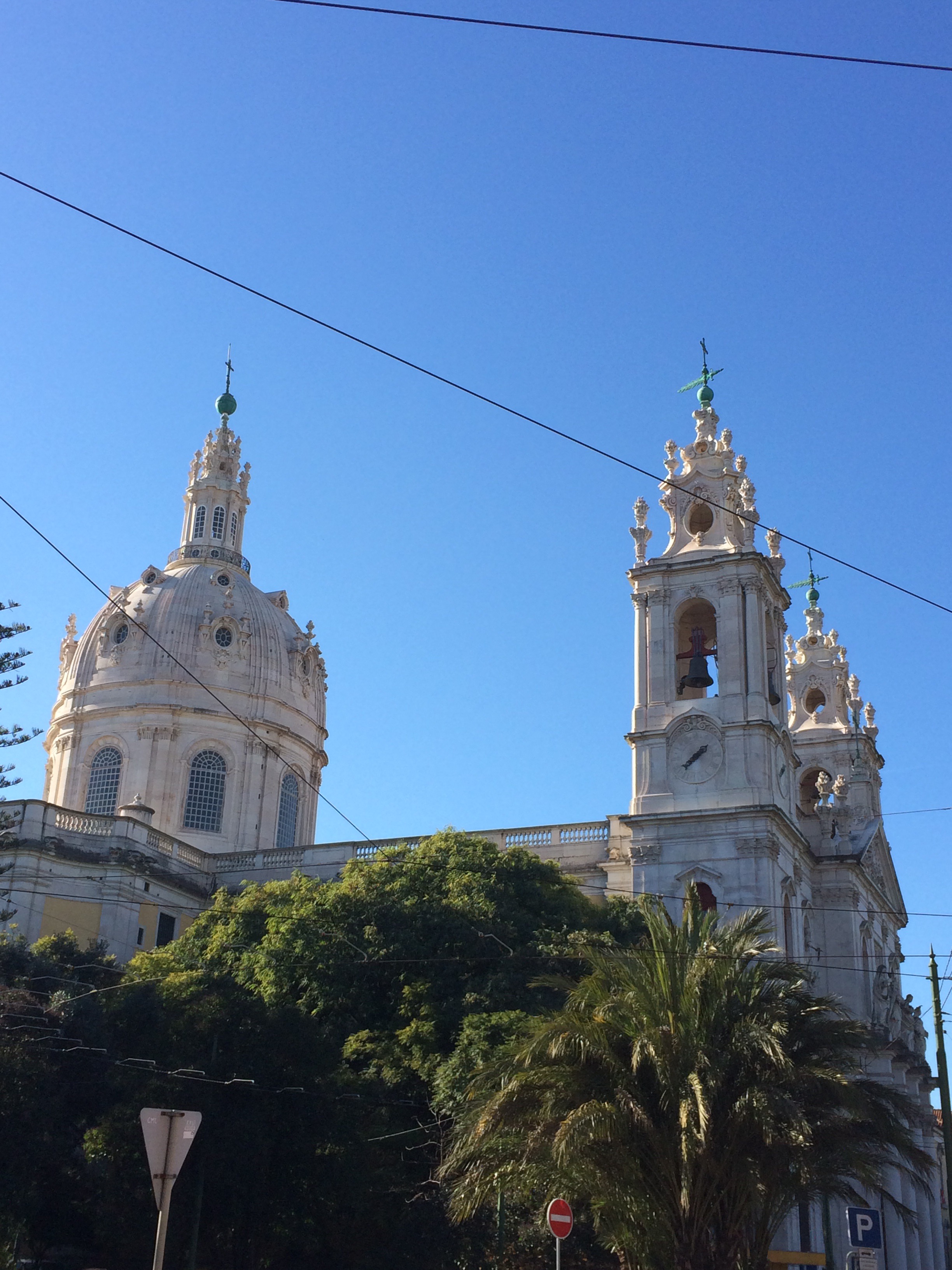 The church itself was commissioned by Queen Maria I of Portugal in the late baroque architectural style. Queen Maria was the first undisputed queen regent of Portugal. Meaning she was heir to the throne and even though she married to Peter III his power would cease and pass to her oldest living child upon her death. 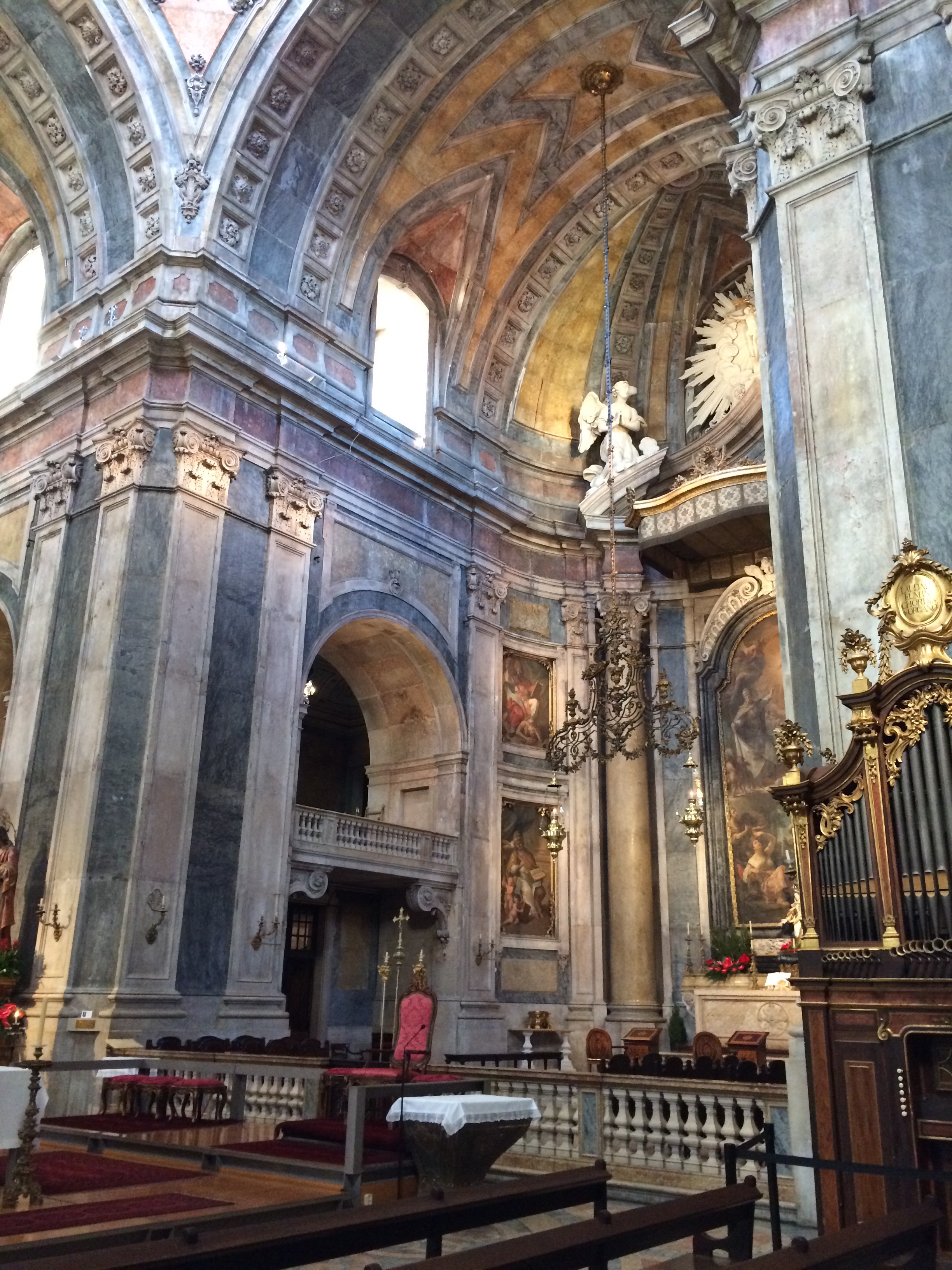 According to my stepdad’s research (though I cannot attest to it because I didn’t read the information myself) Maria had trouble conceiving a child and prayed on the matter for years. Long story short when she did finally have a child she built the Basilica in commemoration as promised for answering her prayers of a child.  She has a hard reign, loosing her husband, and then being moved to Brazil to rule during the Napoleonic occupation of Portugal. Over the years she slowly slipped into a state of madness and eventually died at 81 at which time her son took over the country. She is currently entombed at the Estrela Basilica. 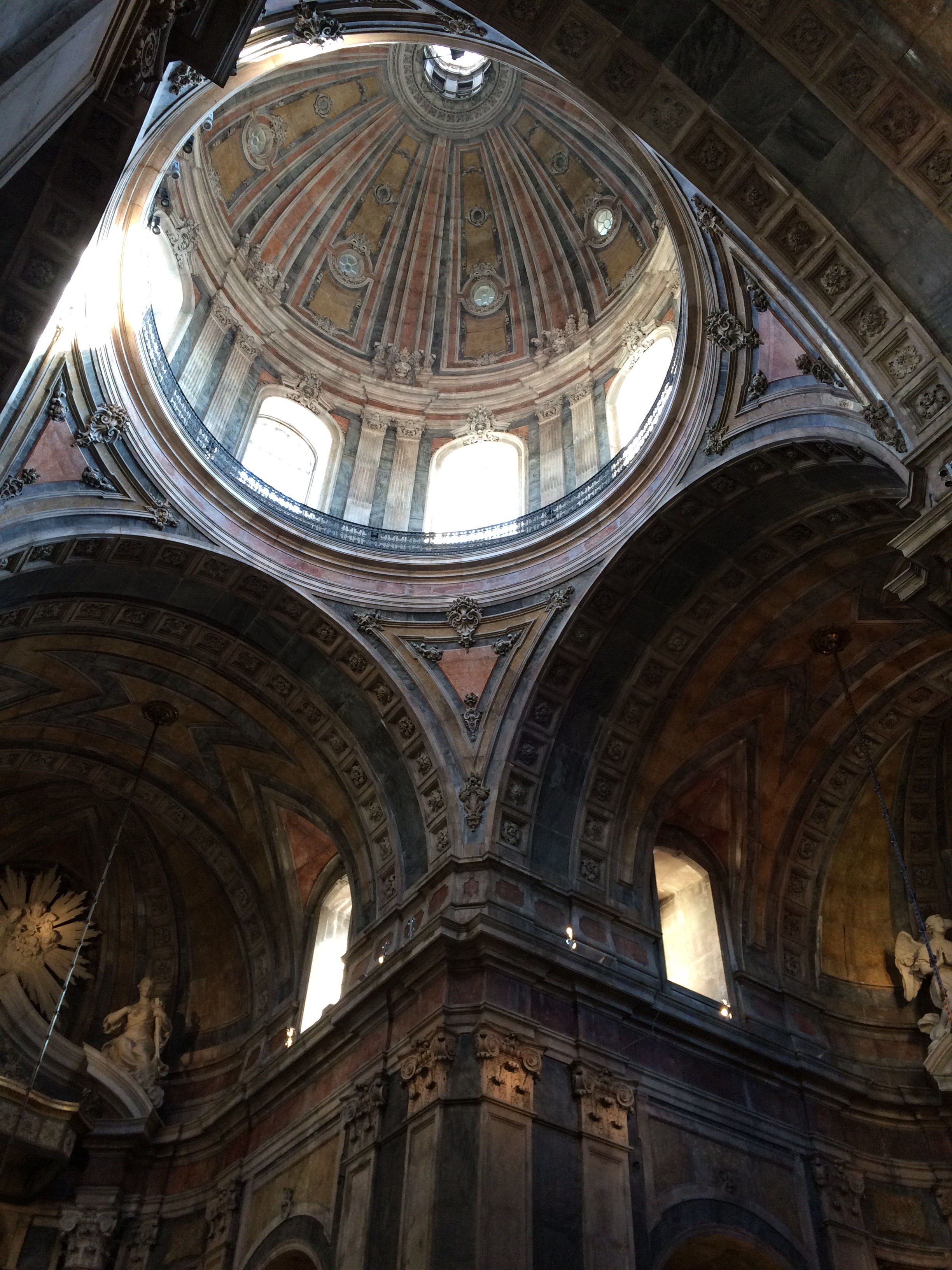 As I mentioned we walked there from the Baixa neighborhood though the old Tram 28 will take you there as well. It is free and open to the public in the main church area, though as with most religious building donations are accepted and appreciated. I did not light a candle this time for fear of nearly setting fire to someone again. 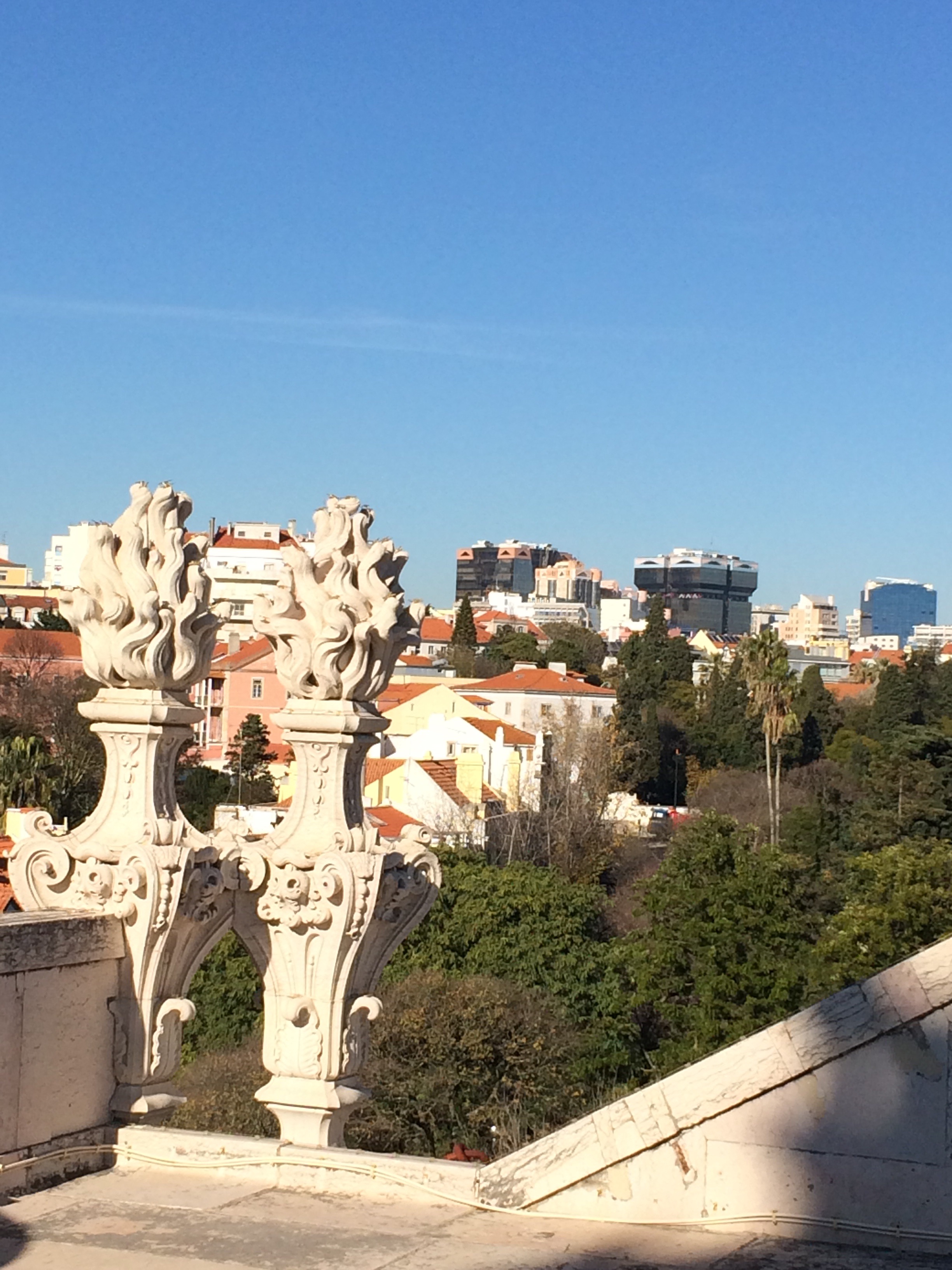 We however found a man who may or may not have been affiliated with the church that we paid three euro each to walk up a VERY narrow staircase to get to the roof of the church. My husband lead the charge, I had no idea what was happening and one point thought perhaps we were not only getting scammed but possibly robed. It turned out fine and the views were spectacular, totally worth the hundred some-odd stairs we wound our way up. 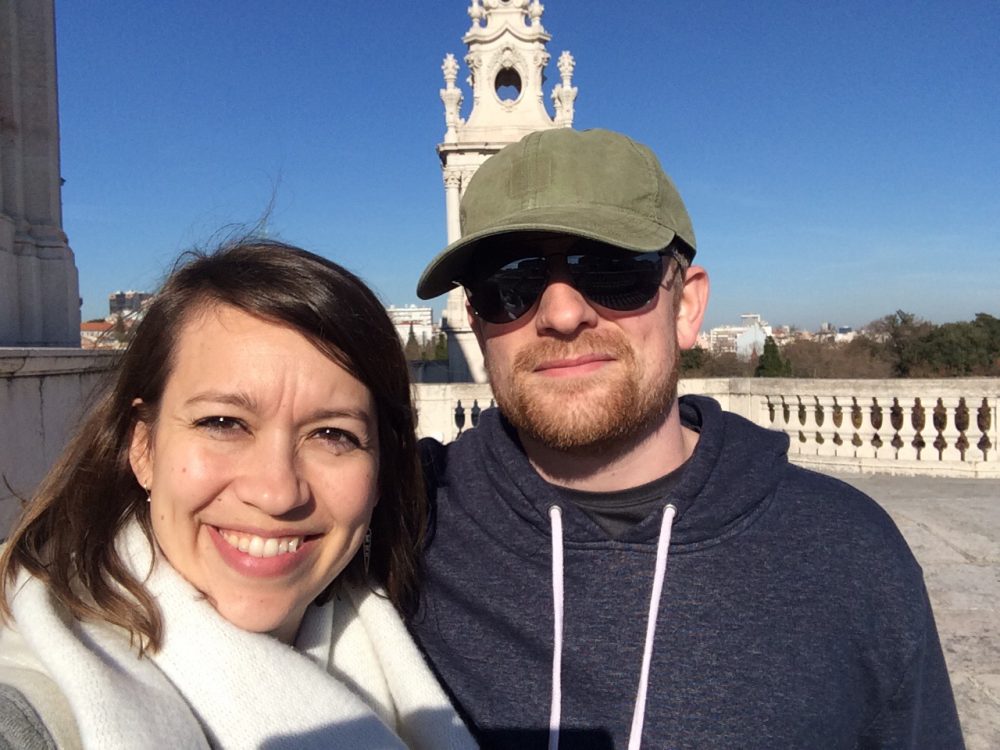 We stood on the roof for a while and took in the views and the sun. The PNW doesn’t get any sun this time of year so being in such a pleasant place was a really nice break. Plus in all my years of touring Europe I had never gotten to be on the roof of a church so I was digging the new experience. 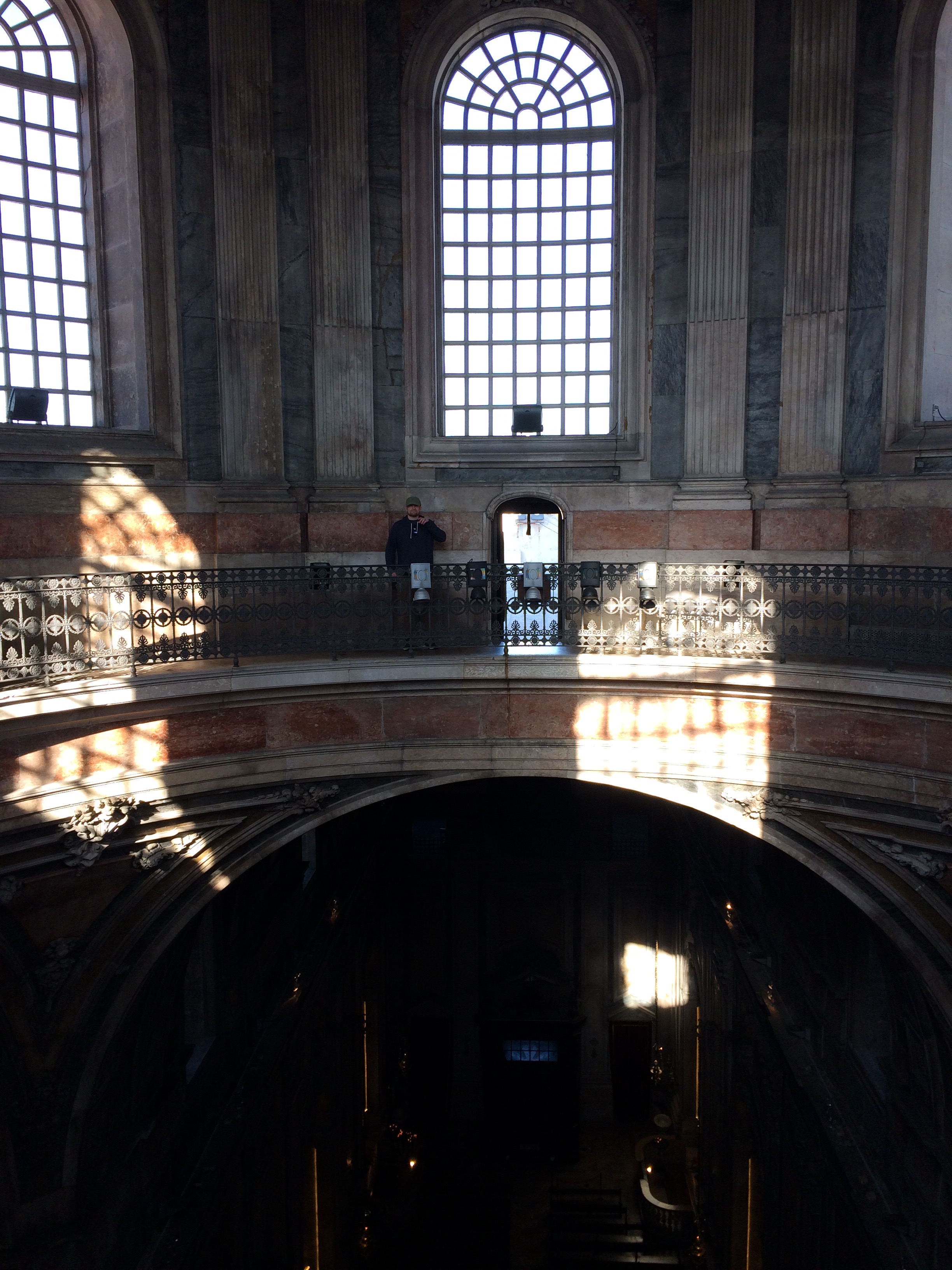 The bells started going, so we retreated into the dome structure, if you think church bells are loud wait until you are standing next to them! Once inside the upper portion of the dome you can walk around the whole space and look down on the church floor. The dome was big. 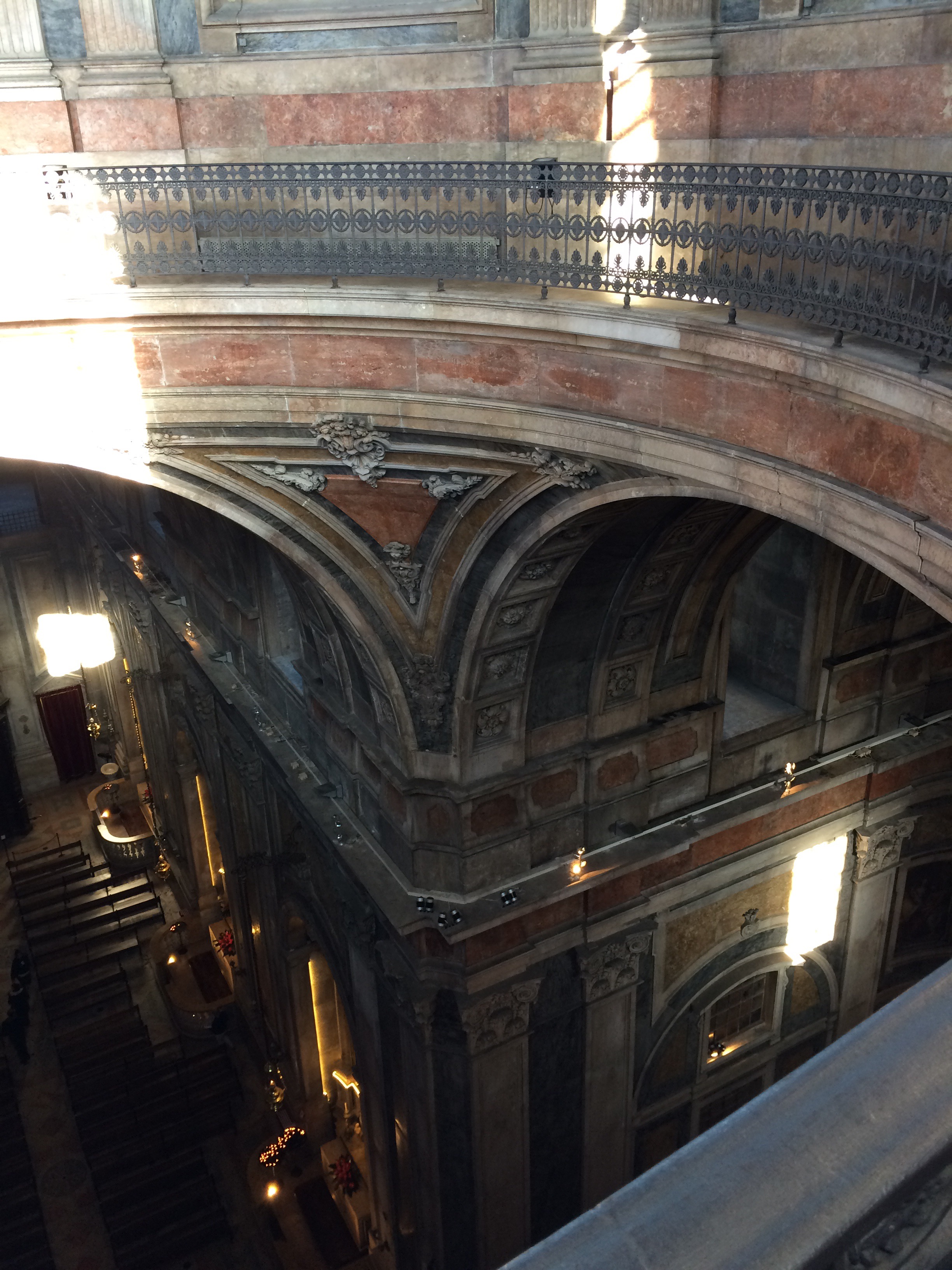 Loved the detailed work on the arches, always a fan of arches. 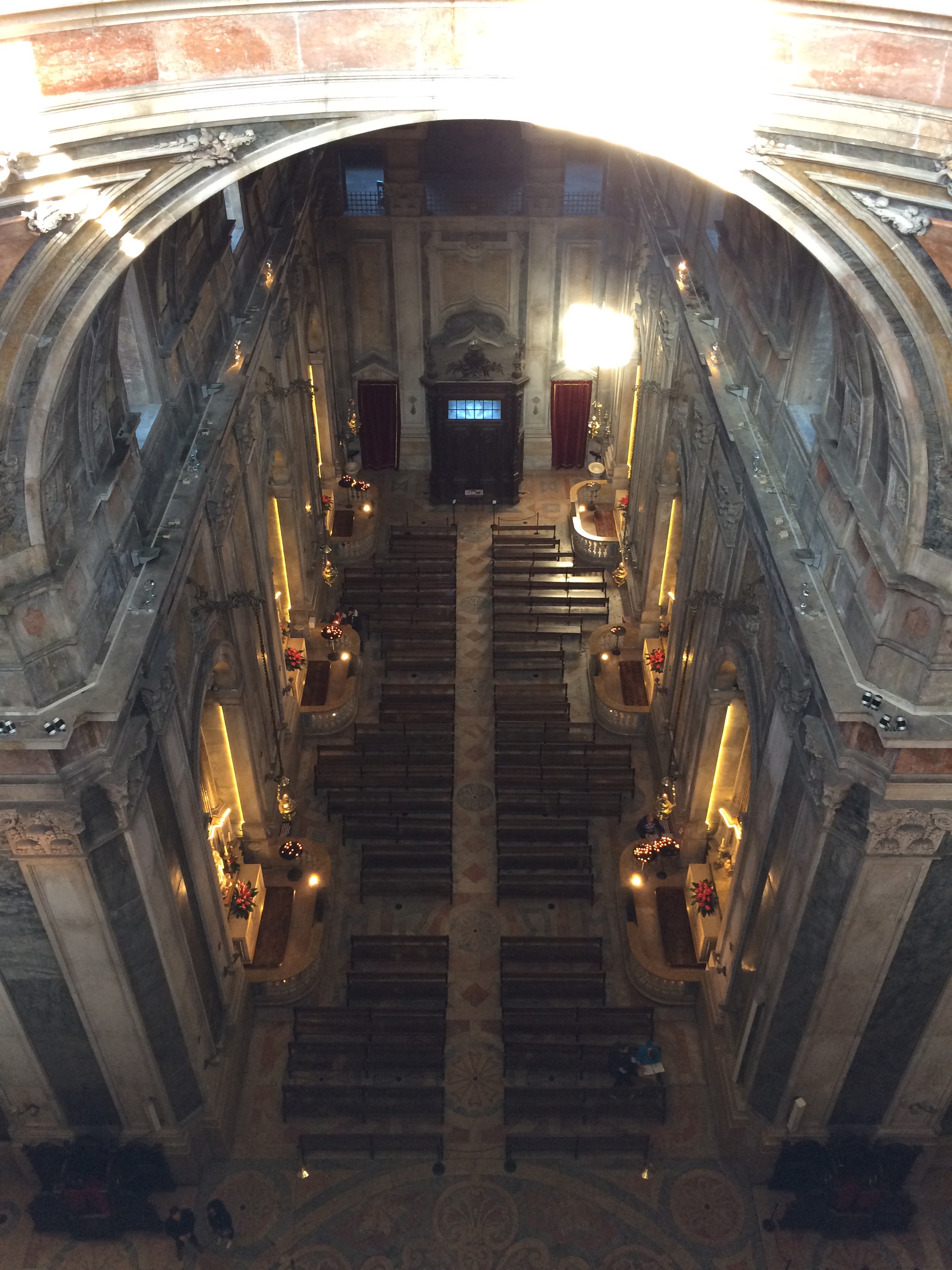 Looking back toward the main doors… 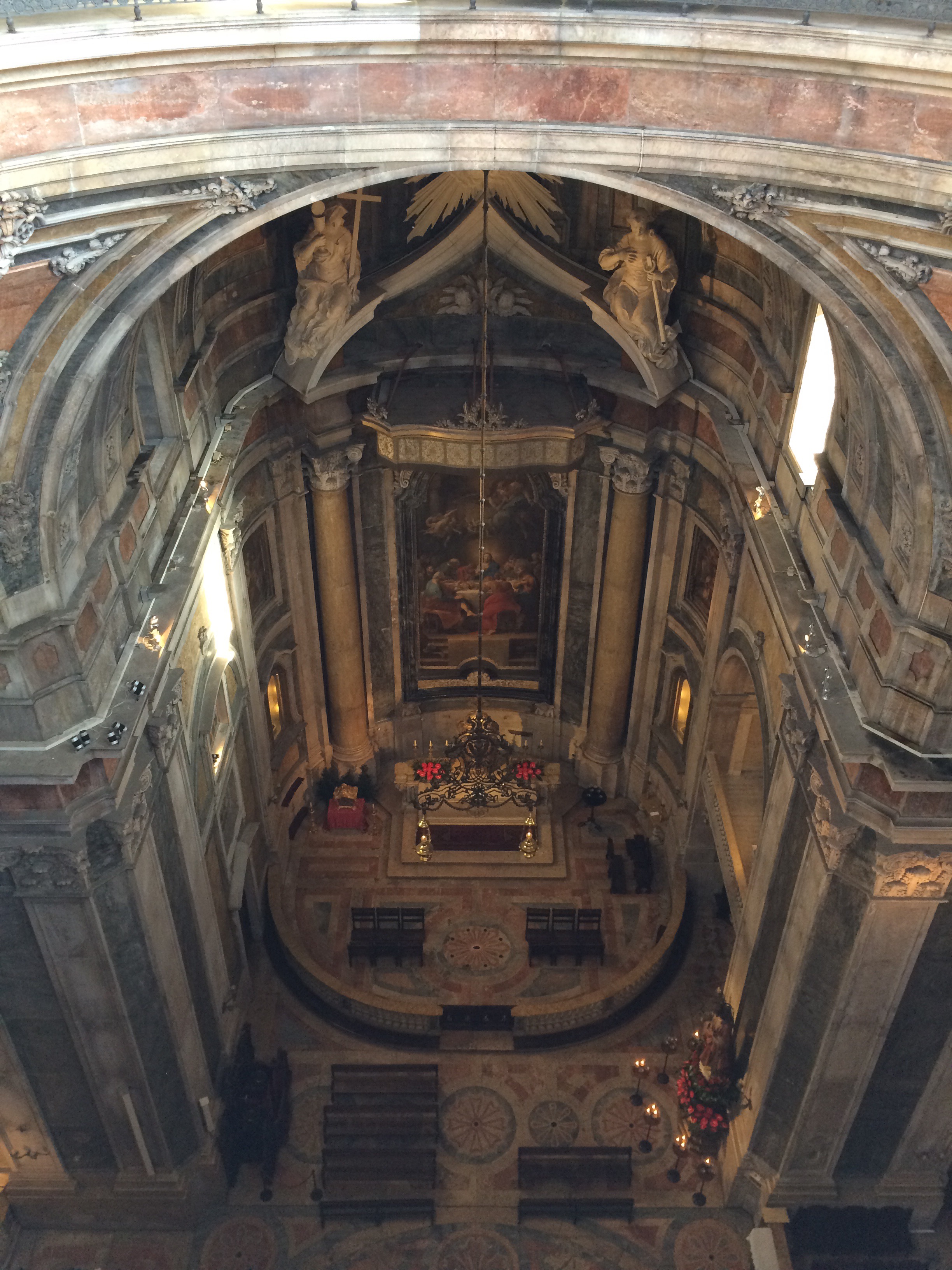 Looking down on the main alter… 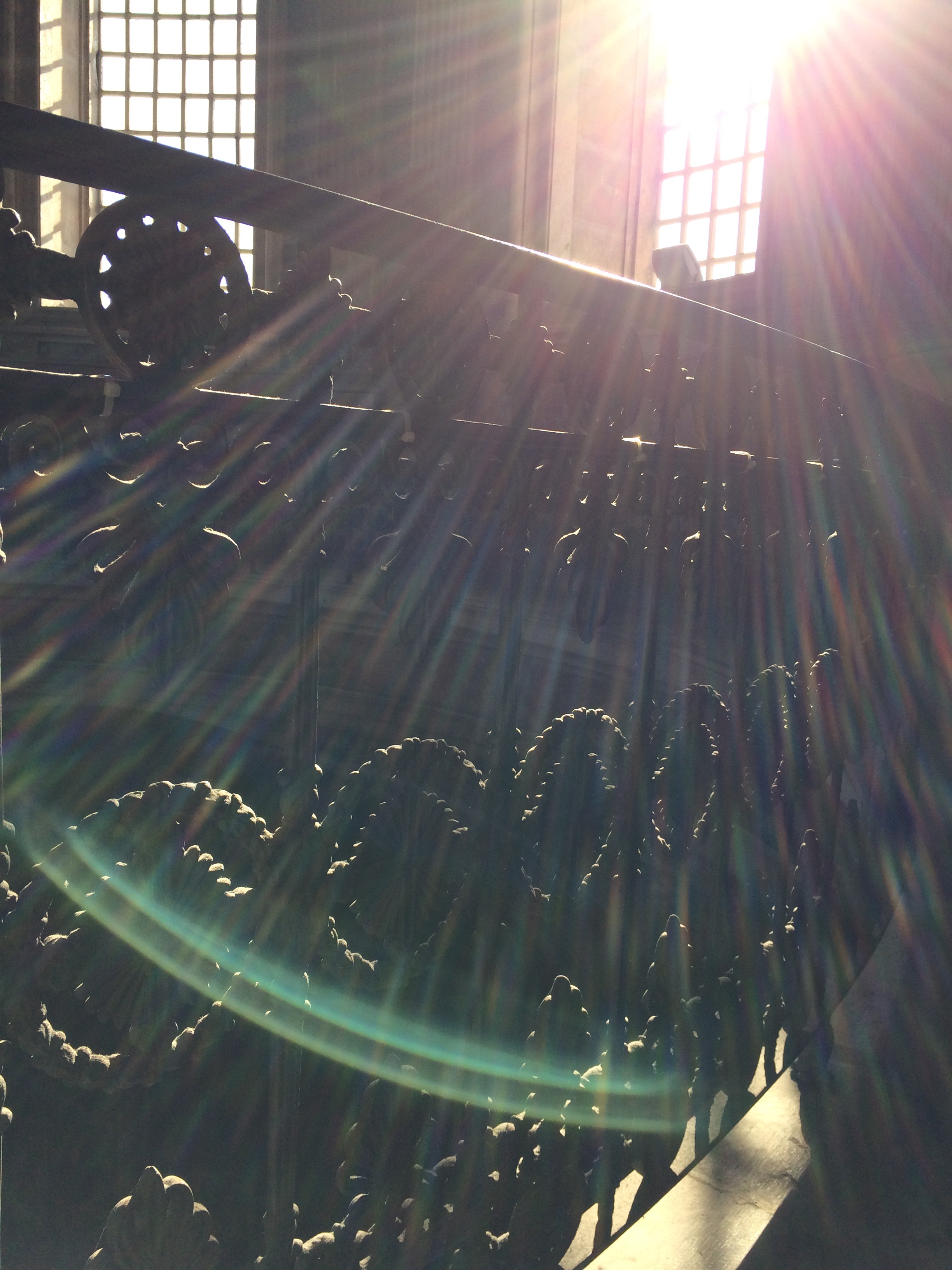 The last and final thing of note about this church is there is a famous 500 piece nativity set carved out of cork that can be seen. We found ourselves there on a day when the viewing was not available. Which didn’t really stop my parents, though they did get caught skulking around areas of the church they shouldn’t have been and promptly got booted out by the guy who let us up the stairs to the roof. Again no idea if he was affiliated with the church, but evidently did have enough authority to kick my parents out.
There is also a very nice park across the street with a café next to a pond, the bathrooms looked horrifying though. We did not venture.
Address and additional information:Praça da Estrela, 1200-667 Lisboa, Portugal