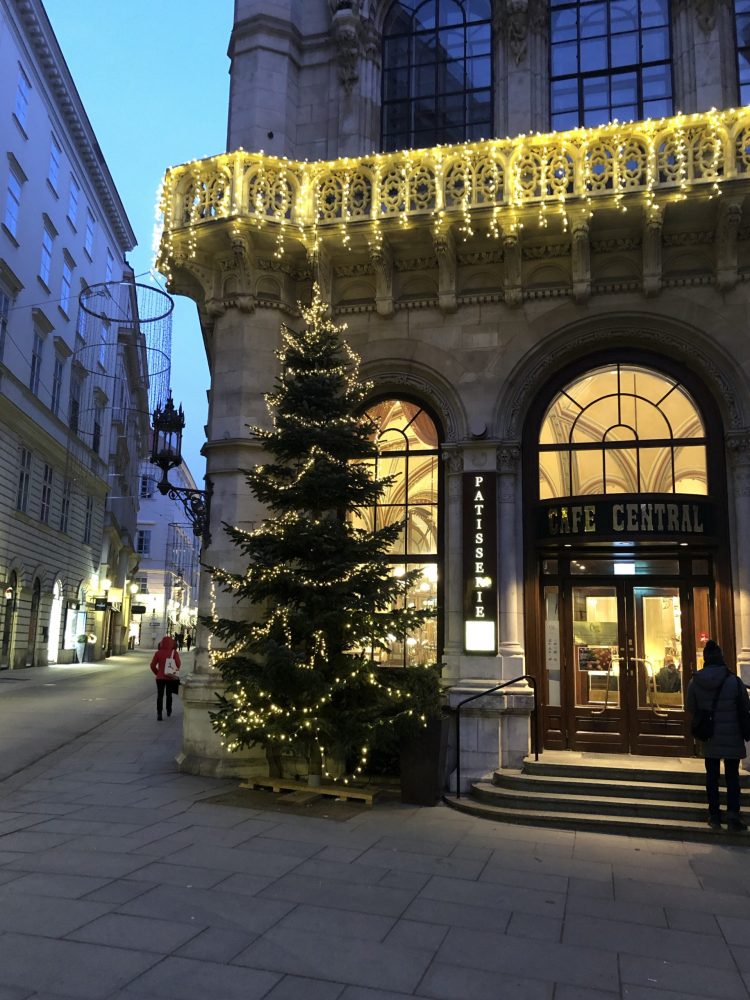 Cafe Central in Vienna Austria is historic, gorgeous, delicious but also comes at a cost, a very very long line to get in. I am incredibly happy that we visited but I am inclined to say the long lines aren’t worth it and Vienna is full of incredible coffee houses, all of which have much shorter lines. 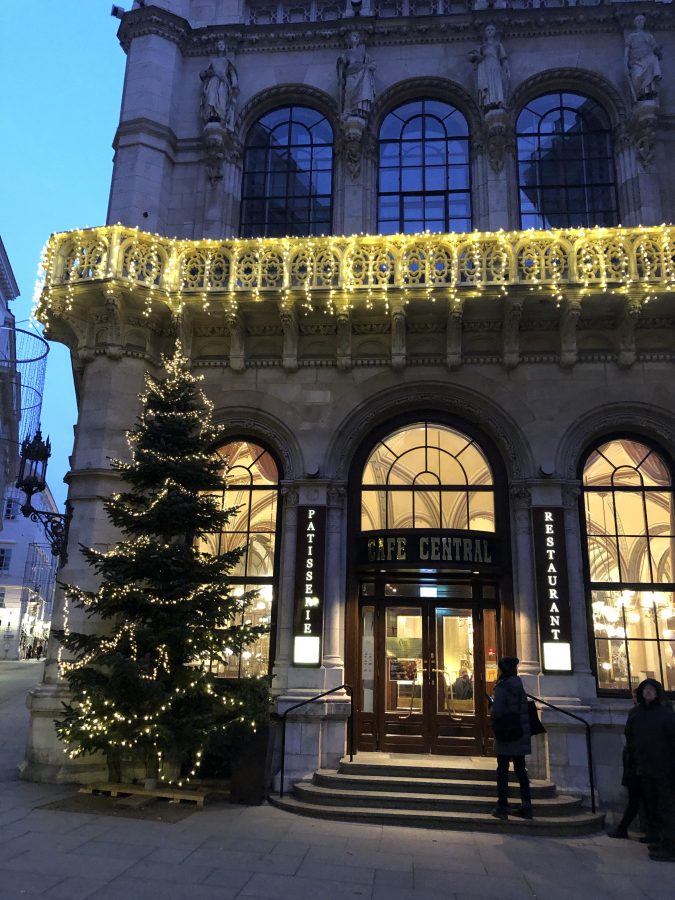 Café Central opened in 1876 in the building of a former bank in central Vienna which was design by Heinrich Von Ferstel. At the time coffee houses in Vienna was the thing, attracting intellectuals, artists, authors and politicians to the cheap eats and common meeting place provided by the atmosphere. Café Central earned the nickname “chess school” due to the high volume of chess players that used the first floor to play long drawn out games. It was also the gathering spot for members of the Vienna Circle a group of philosophy of science students and teachers from the local university. Due to the nature of the environment and the set of people who gathered there regularly many of the patrons were later well know in history such as Adolf Loos, Leon Trosky, Sigmund Freud, a huge swath of Austria writers, poets and journalists and of course given the location and time period Adolf Hitler spent a good deal of time here. 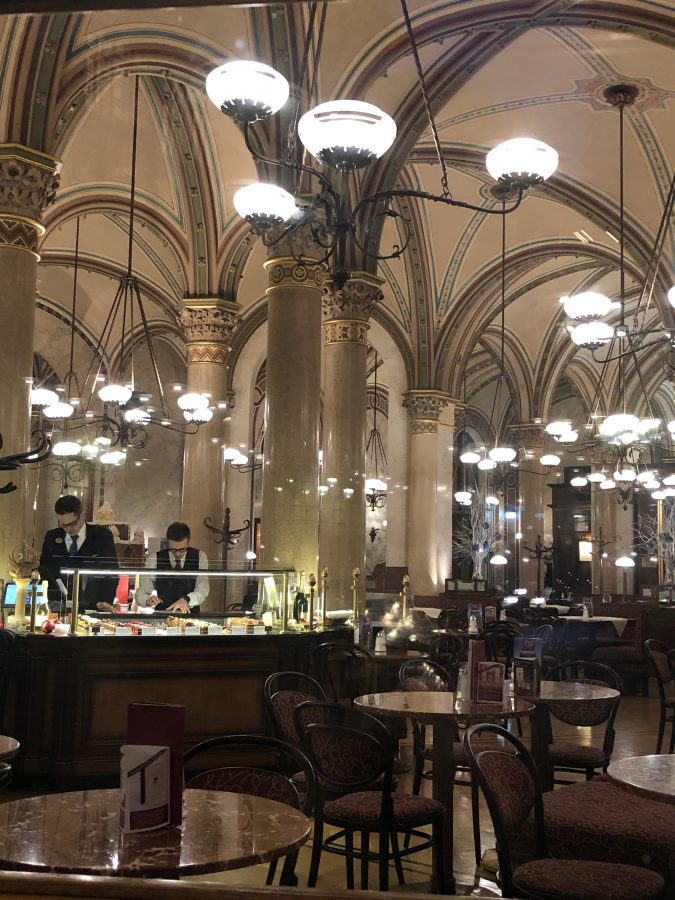 We happen to be in Vienna during Christmas which is one of the busier times of year, so I wasn’t surprised by the near constant line that wrapped around the block. But since having been back I have noticed that even during the off season the café line is quite long. After observing the line for several days and becoming more and more curious about how good this place must be we chose to wake up and be there when it opened. There was a line of three people, six when we joined. And happily only had to wait outside in the cold for about 10min before the doors actually opened. The café is bright barn and incredibly beautiful. Exactly everything you would imagine from a historic café and meeting place. 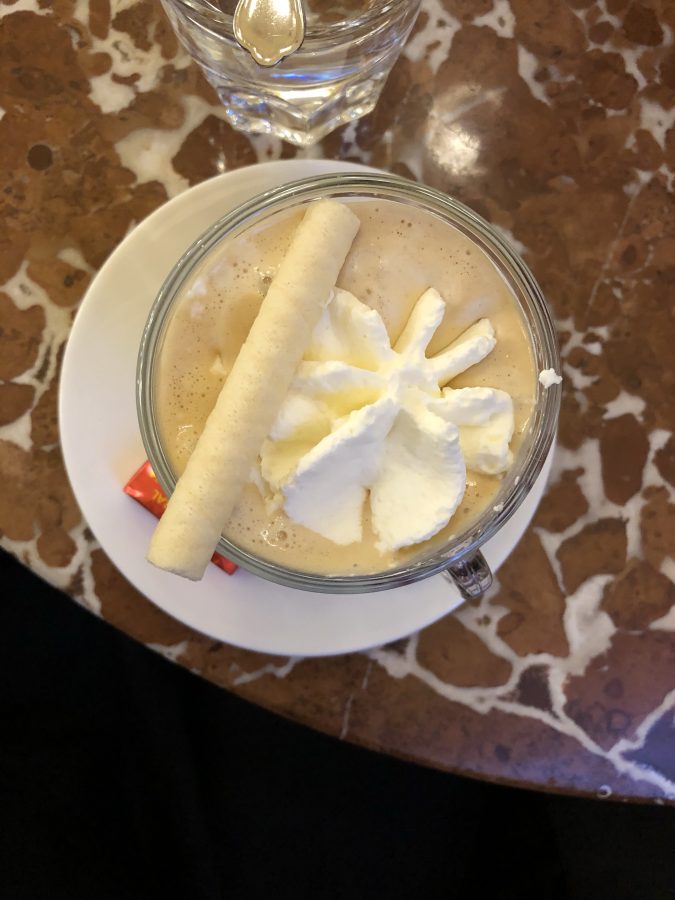 It seems most people come in for pastries and coffee, we chose pastries and coffee and breakfast. It was delicious, though our waiter may have thought we were insane for ordering so much food. Austrian breakfast is traditionally quite light, consisting mostly of coffee and a small pastry. And the small marble tables were not exactly fit for three people, three cups of coffee, water, pastries as well as full plates of eggs and toast. It was a bit of a circus. But we thoroughly enjoyed our selves all the same. It was starting to get very crowded by the time we were finishing up so we chose to hurry out so that others could have our table, we couldn’t have been in there for any longer than an hour and the line was already around the block again. So pro travel tip, either dedicate yourself to standing in that line, or get up at dawn and plan on being the first ones in Café Central.