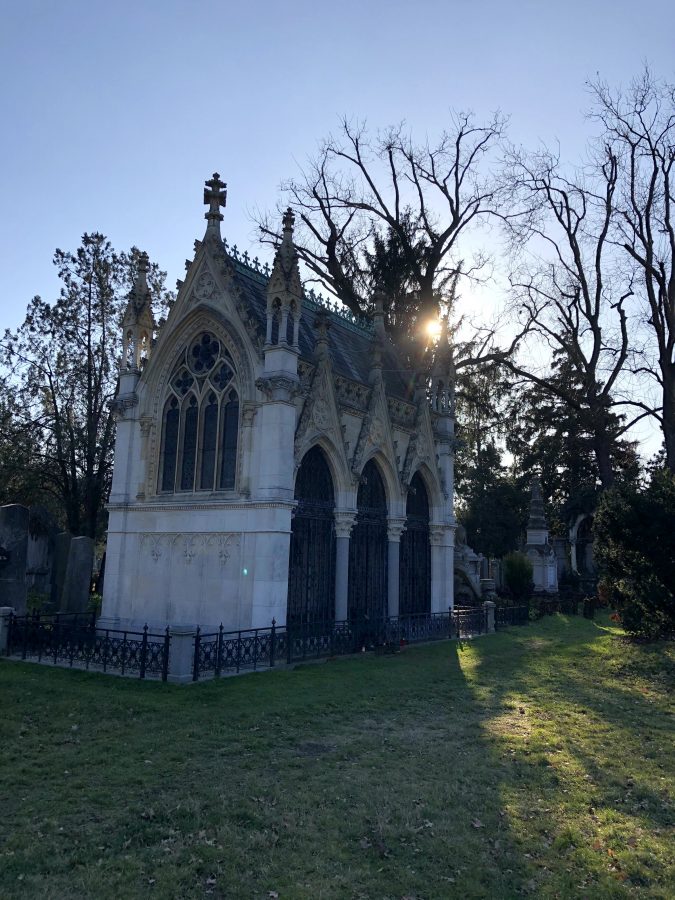 It is probably a little bit weird to visit a cemetery in a county that we had no known ancestors from and especially on New Years Day. But in our defense it was a beautiful sunny day (and as I found out later frigidly cold) day and quite literally everything else was closed. So we made several switches on public transport stopped at Hundertwasserhaus house, wandered around Simmering trying to find the next train stop and eventually found our way to Central Cemetery of Vienna Austria. 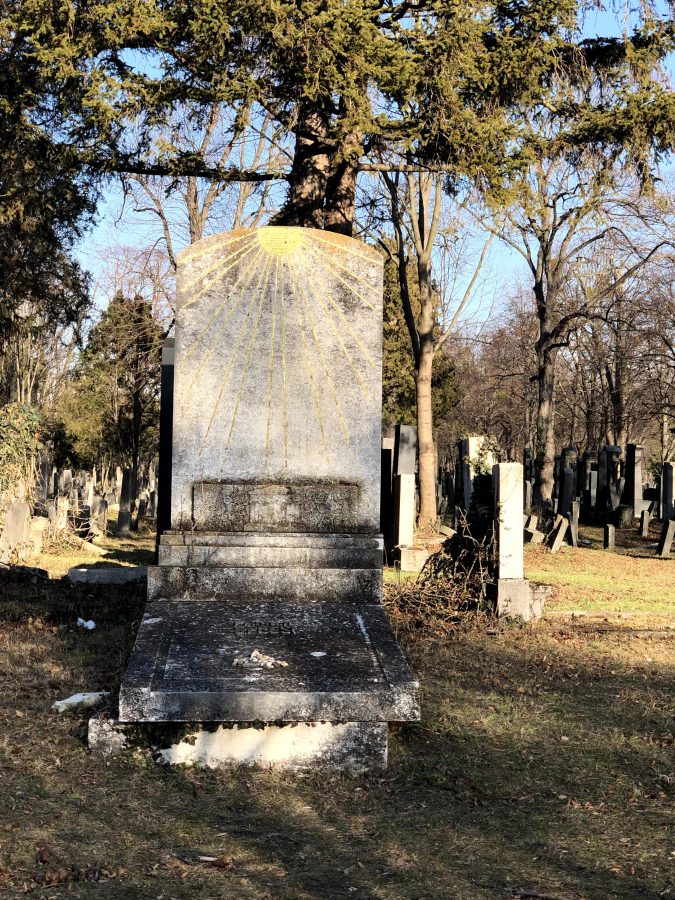 The Central Cemetery of Vienna is one of the largest cemeteries in the world by volume of people interned. The cemetery was a planned effort by city officials in the late 1800s who saw the population of the are rabidly expanding during the industrial revolution. Worried that the present day cemeteries would not suffice, the city bough a large plot of land outside the city limits to built a large cemetery that would work for the population growth for years to come. 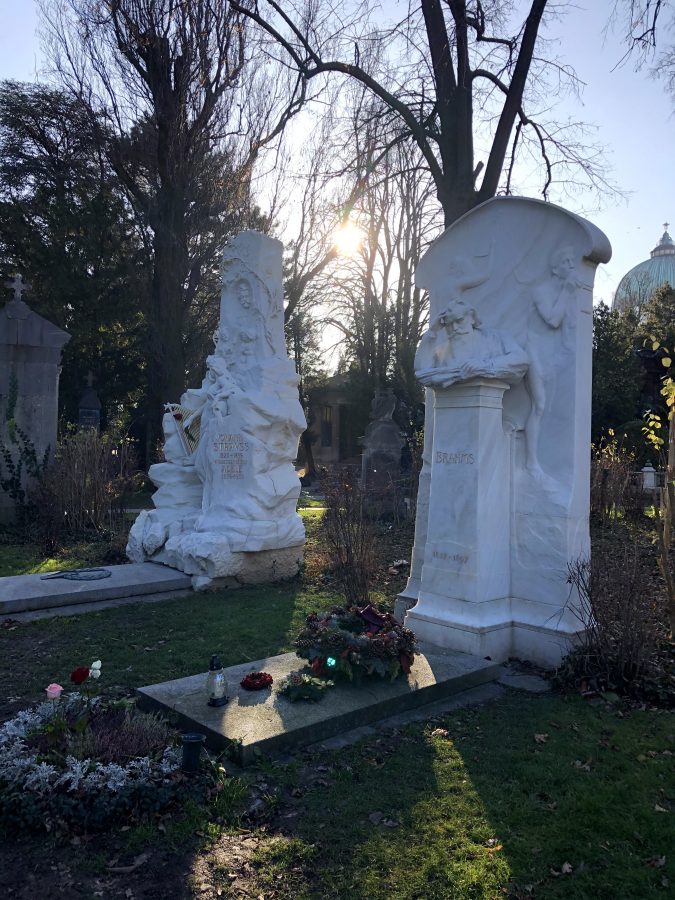 The cemetery was designed by Karl Jonas Myluis a landscape architect from Frankfurt and Alfred Friedrich Bluntschli and opened in 1874 with very little fanfare but quite a bit of interfaith drama. The cemetery was intended to be interdenominational but the consecration of the cemetery was met with resistance, and the inclusion of other faiths was met with displeasure from certain Roman Catholic sects.  When the city announced they didn’t want a Catholic opening celebration and instead gave significant funds to create a Jewish section in the cemetery tensions rose even higher. In the end a small Catholic ceremony was allowed in order to keep the public from really noticing and eventually everyone calmed down. 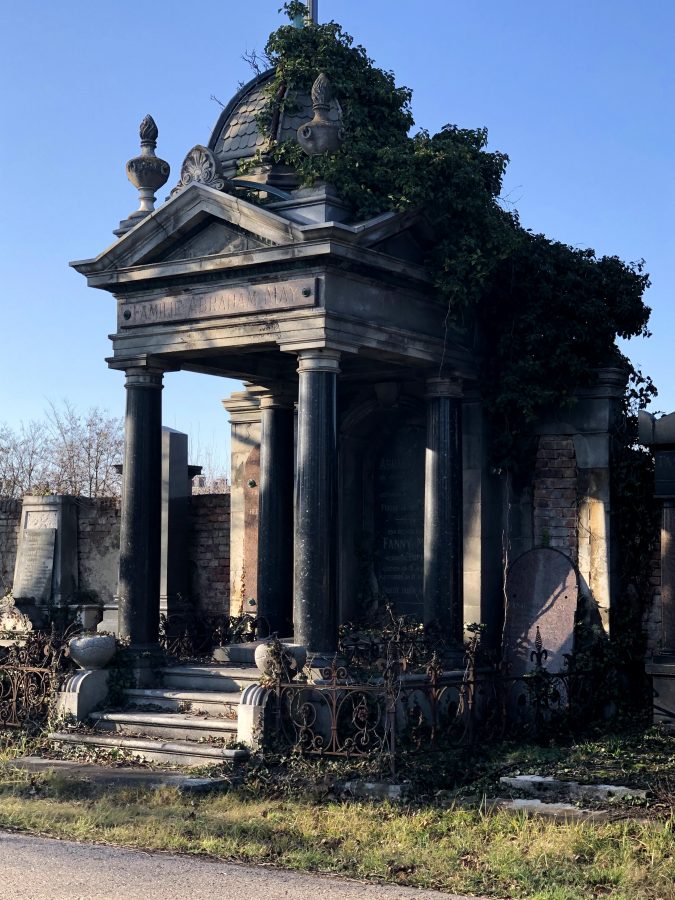 In the beginning the cemetery was fairly unpopular due to its distance from the then slightly smaller city and less common ease of transport. To help change this over the years the city has added things like grave’s of honor to help pull in tourists. As strange as that sounds you should have seen the crowds around the honorary graves of Brahms, Strauss, and Motzart.  Beethoven and Shubert were actually interned here after having been moved from Wahringer Ostfriedhof in 1888.

Over the years as the city has become more diverse the cemetery has added additional sections and places of worship for various religios faiths. In additional to the original Catholic, Protestant and Jewish sections (one of which was partially destroyed during Kristallnacht) there is an Islamic section. Russian, Greek, Romanian, Bulgarian and Serbian Orthodox are all provided sections within the cemetery as well as Buddhist and those of the Morman faith.

The Central Cemetery of Vienna is obivously quite large and while we thought it was a very nice visit one can only spend so long wandering around grave sites. I would suggest before visiting knowing which sections or graves you wish to visit and make a plan. It is also quite easy to get lost as many of the older sections of the cemetery have mausoleums which hide pathways and site lines. For safety sake I always suggest going in groups to these types of cemeteries, in broad daylight and be careful a lot of pickpockets rob people in grave yard due to obscured site lines and few crowds. 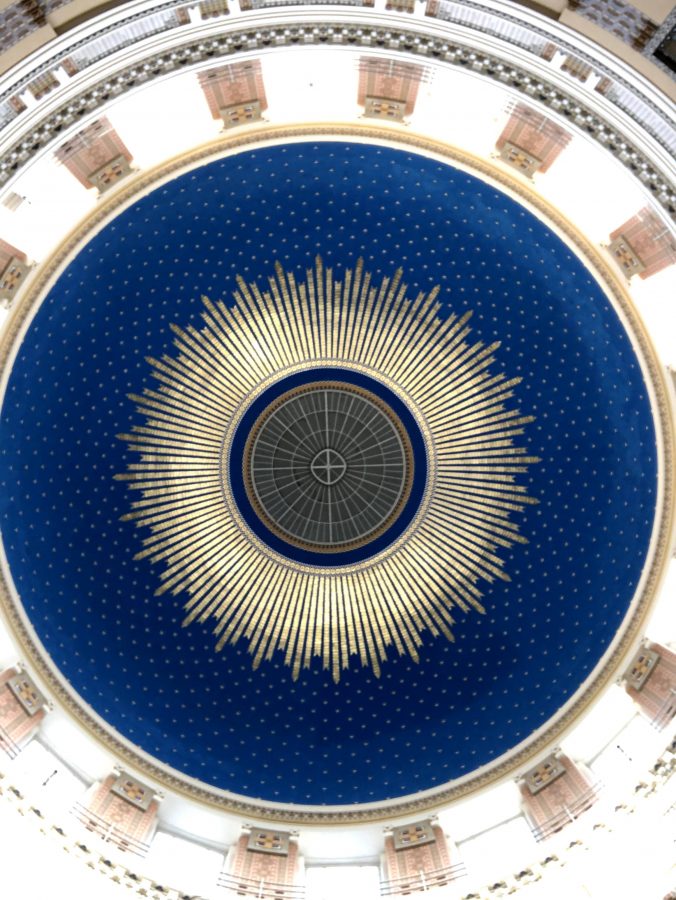 We took the “Zentralfriedhof” stop on the Vienna S-Bahn and which stopped at two gates along the cemetery wall. But there are some spaces to park if you chose to drive. Additionally the cemetery offers public transportation within the grounds to help people get to where they wish to go, like I said it is big. Given the time of year we were there the days were quite short and it was extremely cold so we kept our itinerary to a minimum. We wandered around the oldest Jewish section admiring the remaining large tombs, we eventually found our way to the St. Charles Borromeo Cemetery Church and poped in to warm up. It was a really fascinating church designed by Max Hegel and built between 1908 and 1911 in the Art Nouveau style. But is so pristine and light it almost looked new. I of course wandered around way too long taking pictures and trying to open doors I wasn’t allowed to. 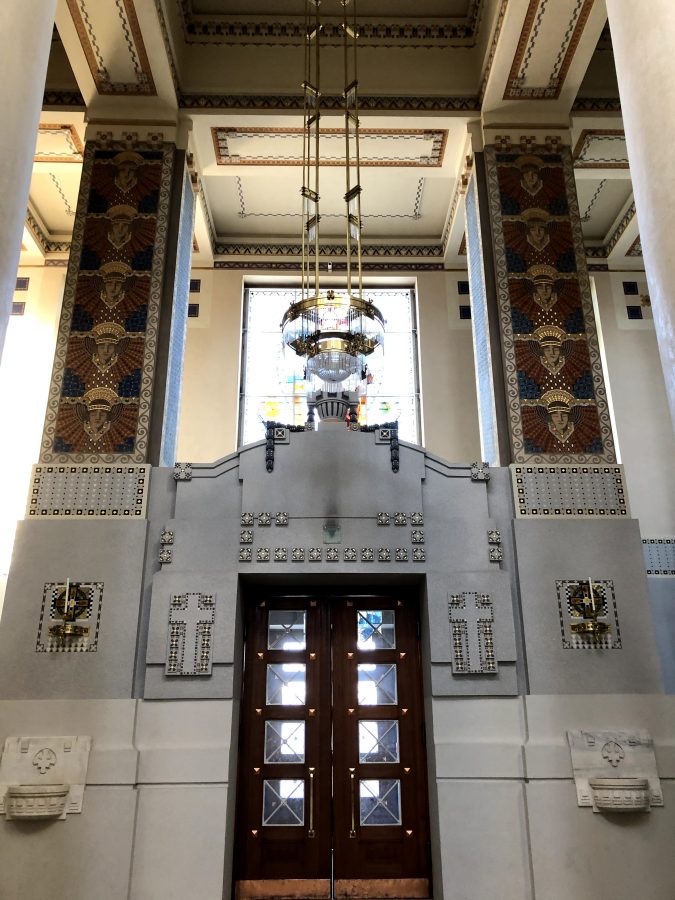 After getting sufficiently warmed up and figuring out where the honorary graves are our wander continued. We finally found them parked right in front the huge crowds of tourists. I wanted to go find Falco’s grave for those not in the know he was an Austrian pop start whose song Rock Me Amadeus was pretty popular in the US during the late 1980s but I didn’t have great reception and gave up. We started to wander toward the main gates and noticed a small cafe, so of course we stopped for large cups of coffee and cakes before getting back on the tram and returning to our apartment for the night. 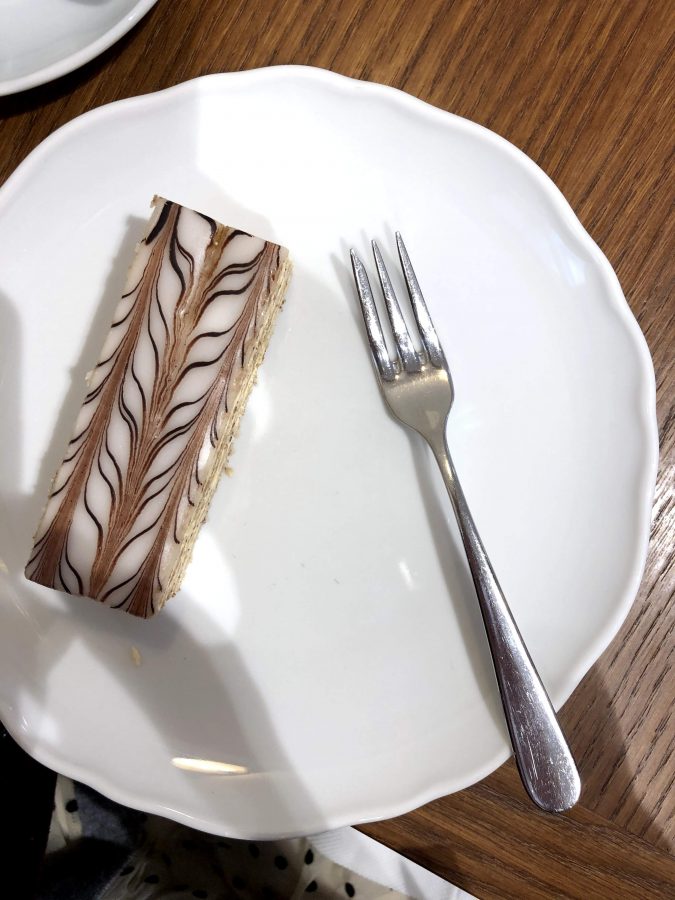 One day I would very much like to return to the cemetery, maybe in the spring or fall when it is slightly warmer and I have more daylight to explore the other places of worship. It may seem like a strange place to visit but like the Viennese say the Central Cemetery of Vienna is “half the size of Zurich, but twice as much fun”. No kidding that is a real joke they say. 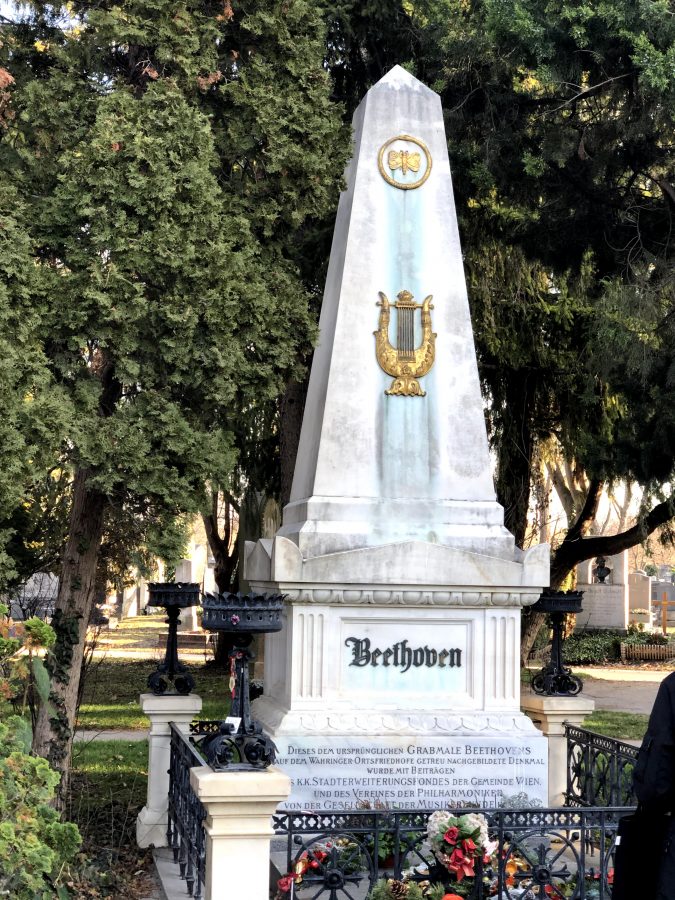