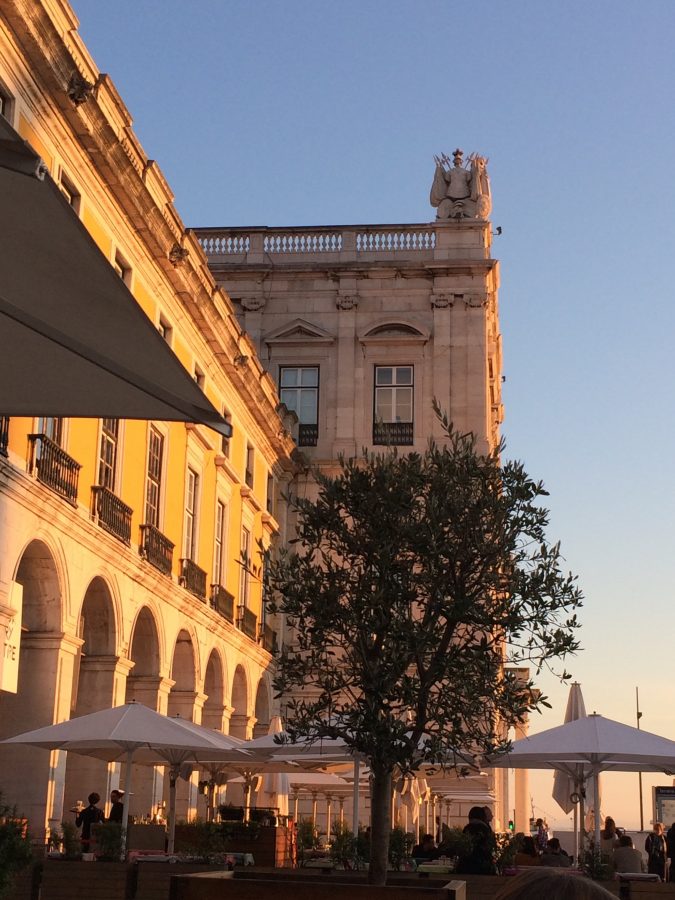 We came to Portugal with an extraordinarily large list of things to do. With four adults all with widely varying interests it was bound to be a busy trip. European countries has be a challenge to tour at Christmas, things tend to be shut on Christmas Eve, Christmas Day, Sundays, and Boxing Day. We had heard that Portugal doesn’t totally shut down like say Austria would at Christmas, so we were hoping to get to see a few more thing. But come Christmas Eve most everything was shut and we lost a day of museums and tours. Which in reality was quite good for everyone, the people who live and work here got to spend the day with their families, my mom and husband who were quite sick with the flu felt less guilty laying around all day and it gave us a leisurely day to just wander around and explore. Which happens to be my favorite way to tour a new place. 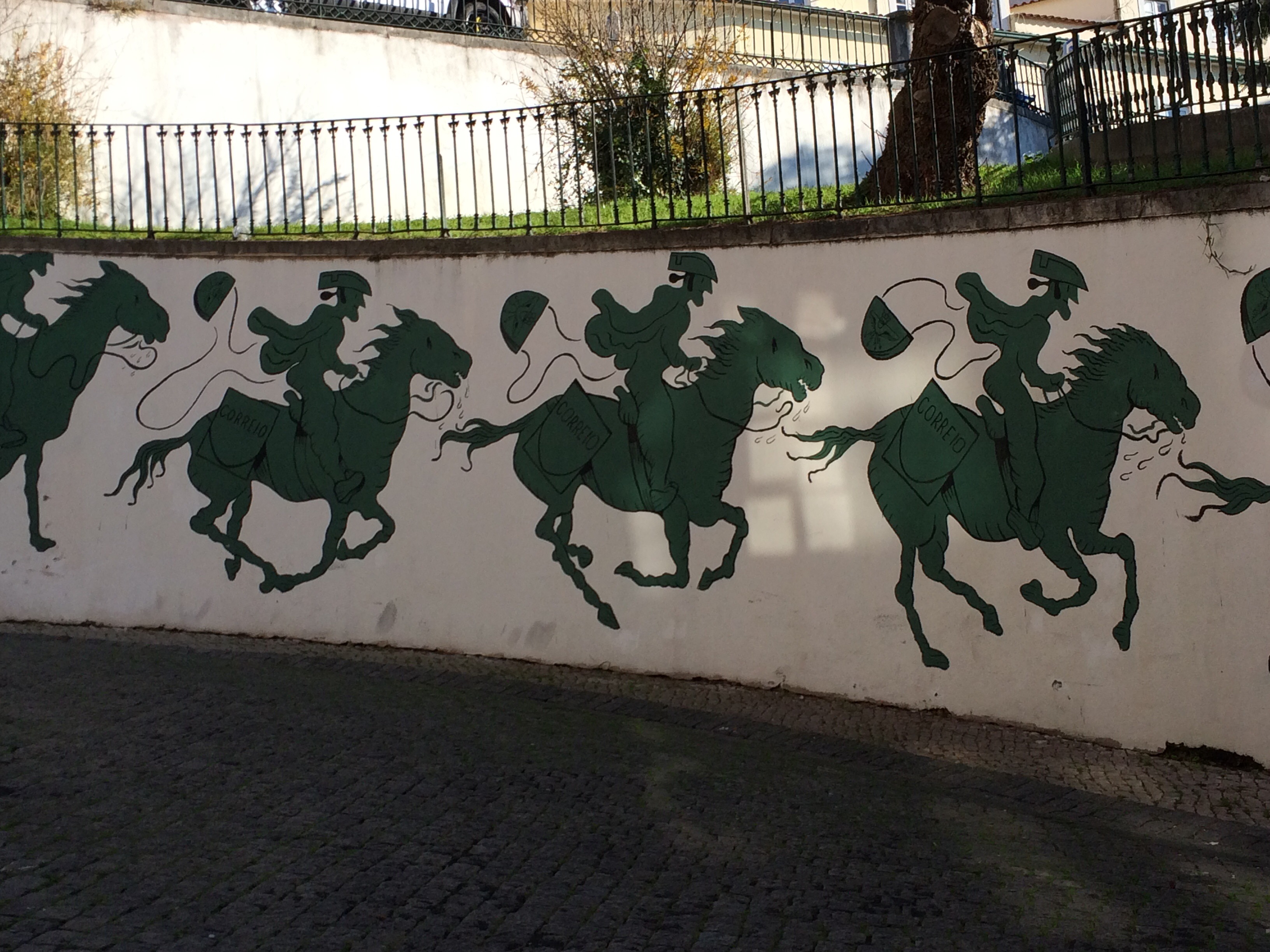 I haven’t the faintest idea what this mural was for, it obviously wasn’t graffiti and the horses looked like Seuss characters. What ever the reason they were there, they made me smile. 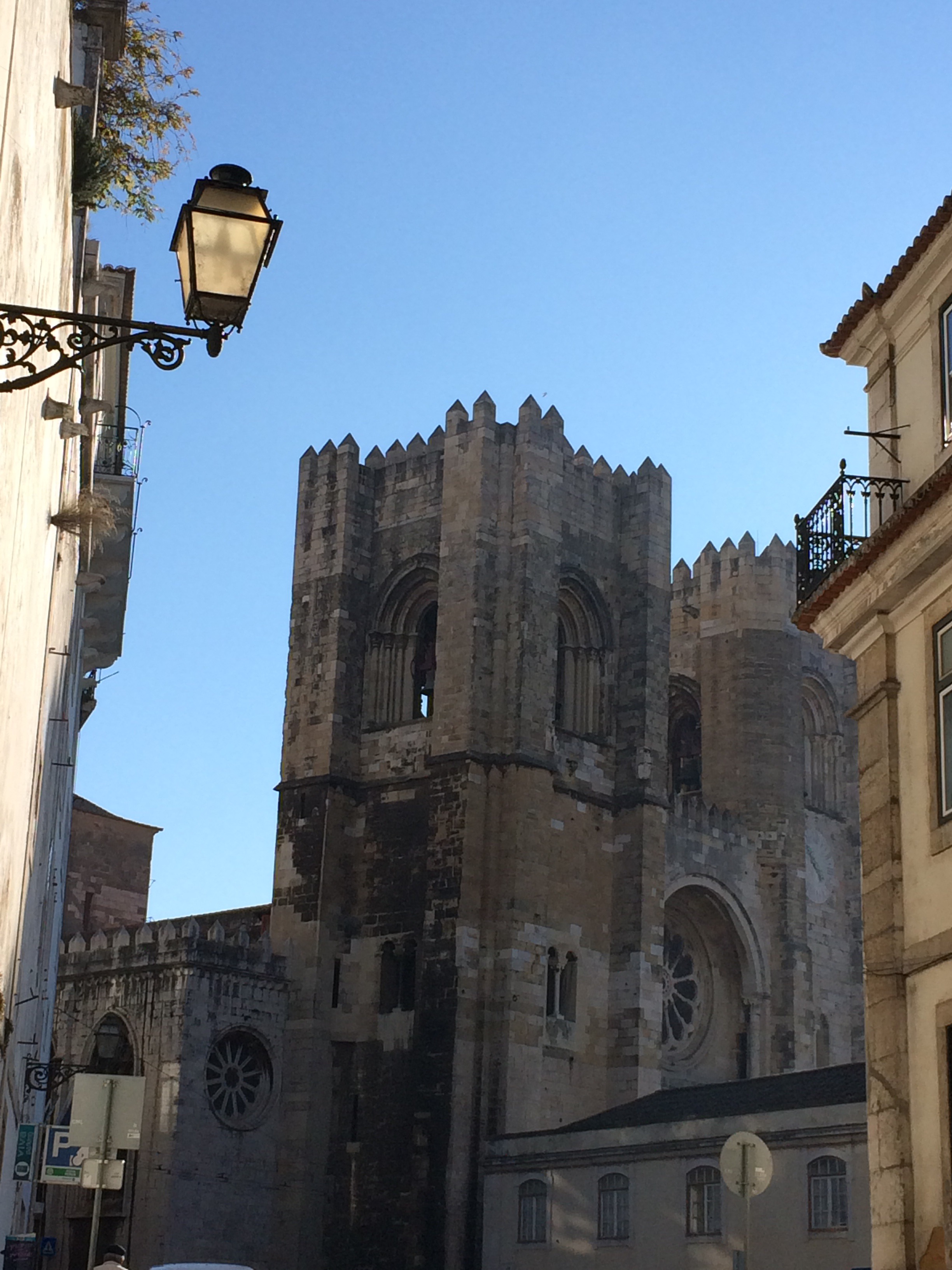 We were staying on the boarder of the Baixa and Alfama district. Our street was the last street in the Baixa that was rebuilt after the earthquake of 1755. Everything that sat “behind us” in the Alfama neighborhood pre-dated the earthquake. One such building only about a five min walk from our apartment was the Patriarchal Cathedral of St. Mary Major. Built in 1147 it is the oldest church in Lisbon still standing and is the see of the Archdiocese of Lisbon. While I love beautiful ornate baroque churches there is something special about gothic architecture. While I am not catholic or religious in any way, I did choose to light a candle. Though in typical me fashion, I nearly lit myself and the sweet elderly woman standing behind me on fire in the process. When I went to leave I looked back and saw my candle was already out. I tried, folks I tried. 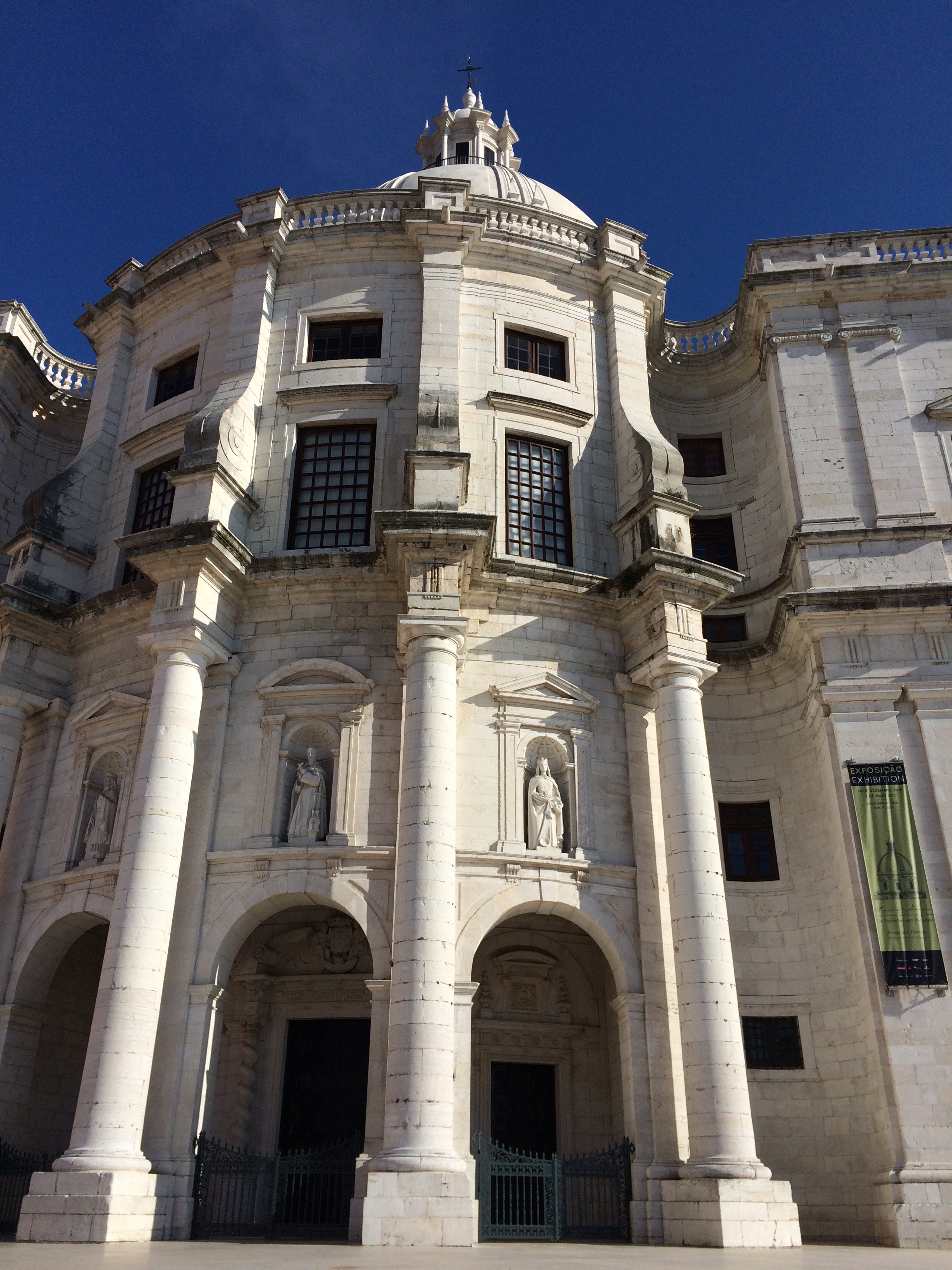 Christmas Eve was a Saturday so we were on the look out for the Thieves Market or Feira da Ladra. Which happens every Saturday and Tuesday year round. It is the largest flea market in Lisbon and totally worth the trouble locating. Imagine street full of small vendors, garage sale items, old and new shoes, food stuffs, jewelry and antiques. You name it they have, they probably even have that thing that was stolen from you earlier in the trip. 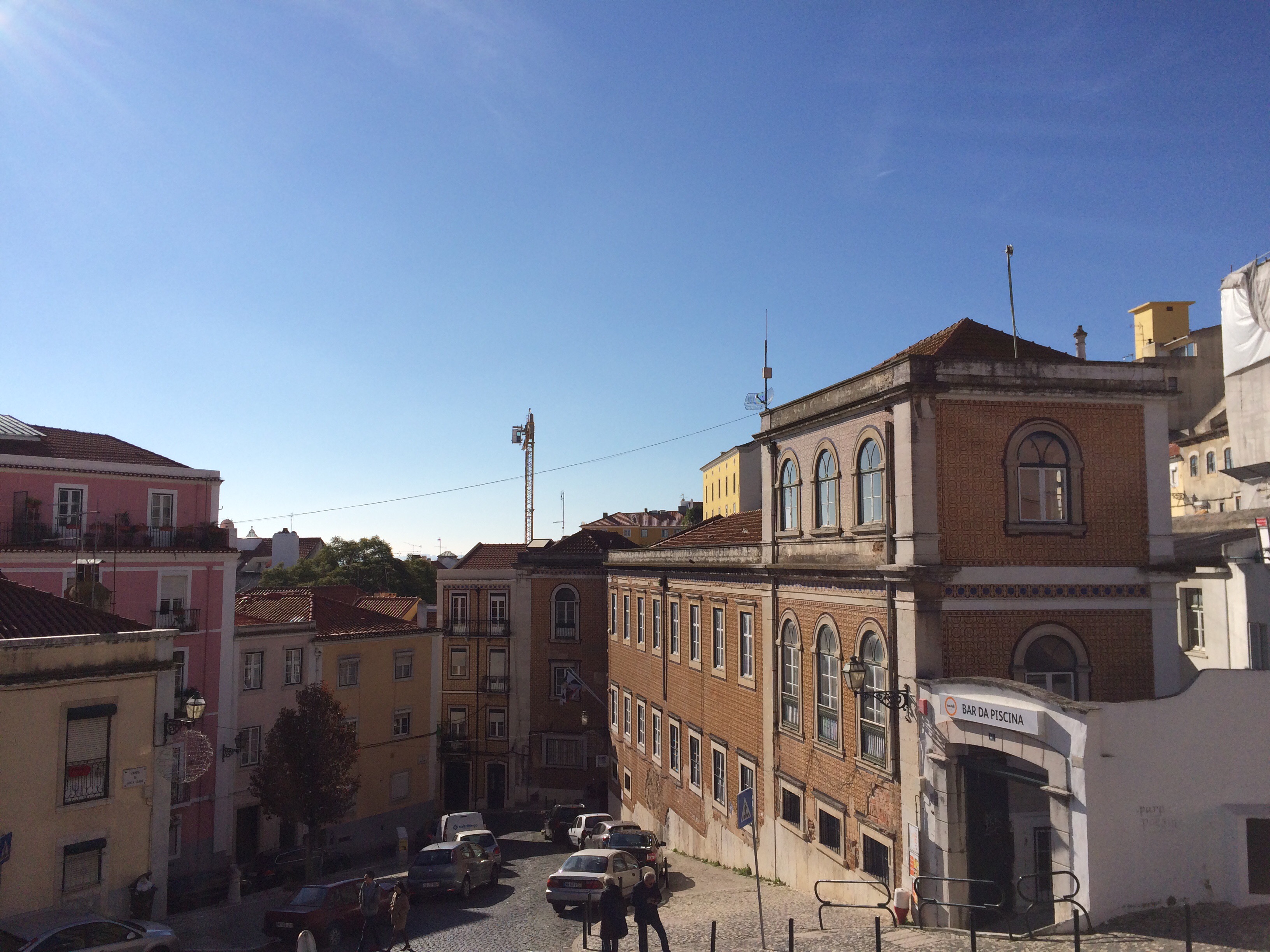 We set out looking for the market which was said to be by the Santa Engracia Church in Alfama. When we got to the church it was silent, the gates were closed, the court yard was empty, there was no traffic or people milling about. We were really confused. After standing around frustrated for a few min, I gave up and started exploring the church’s exterior because its beautiful and why not….well it is BEHIND the church. So if you try to locate don’t make the same mistake, find the church, then walk behind it and you literally cannot miss the market. It is amazing. And of all the things we did while there, I enjoyed the market the most. 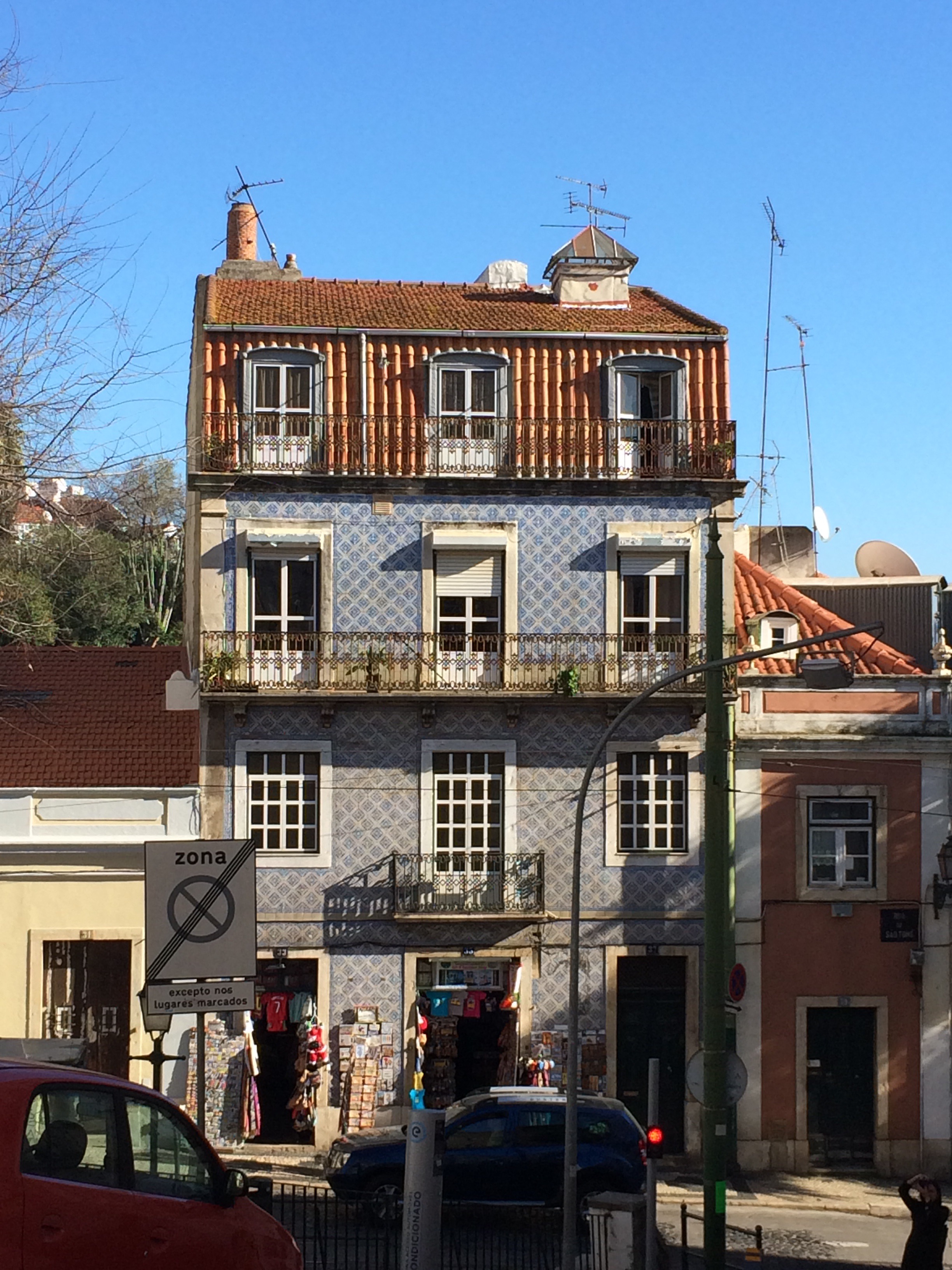 We also scouted out the walk to São Jorge Castle a roman and pre roman structure, monument and archeological site that overlooks the city. We found my dream apartment on the way, blue tiles ground to roof and rooftop balconies. Sold. 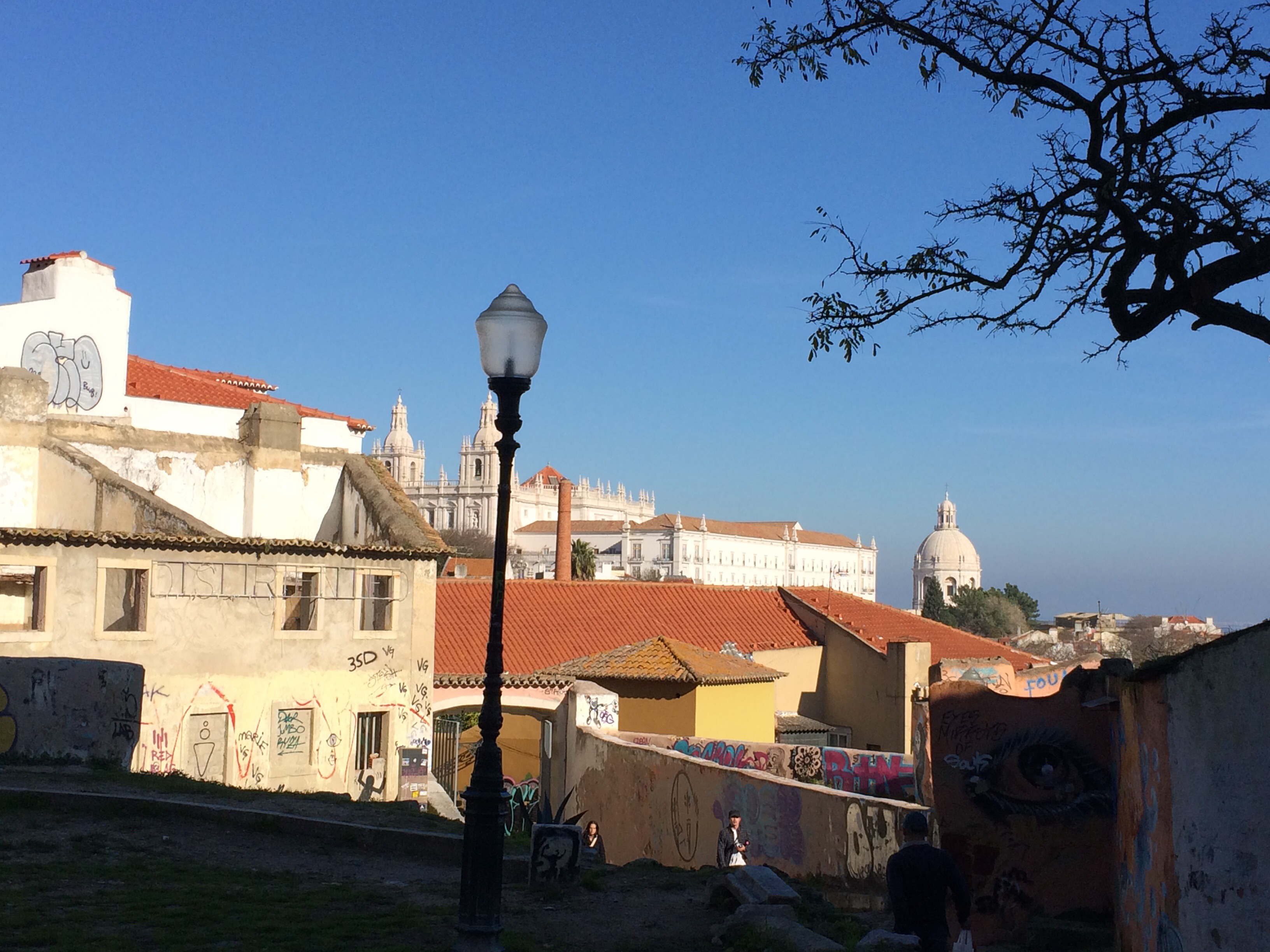 We walked through a small dog park like area that was covered in graffiti and was clearly an old structure of some sort. Everywhere you turn in this city is a beautiful view. We finally wound up locating the entrance of the castle which turns out was REALLY close to our apartment, we wound up walking all over the Alfama district for no reason. Well, it was beautiful and we had a great time so it wasn’t a total loss. 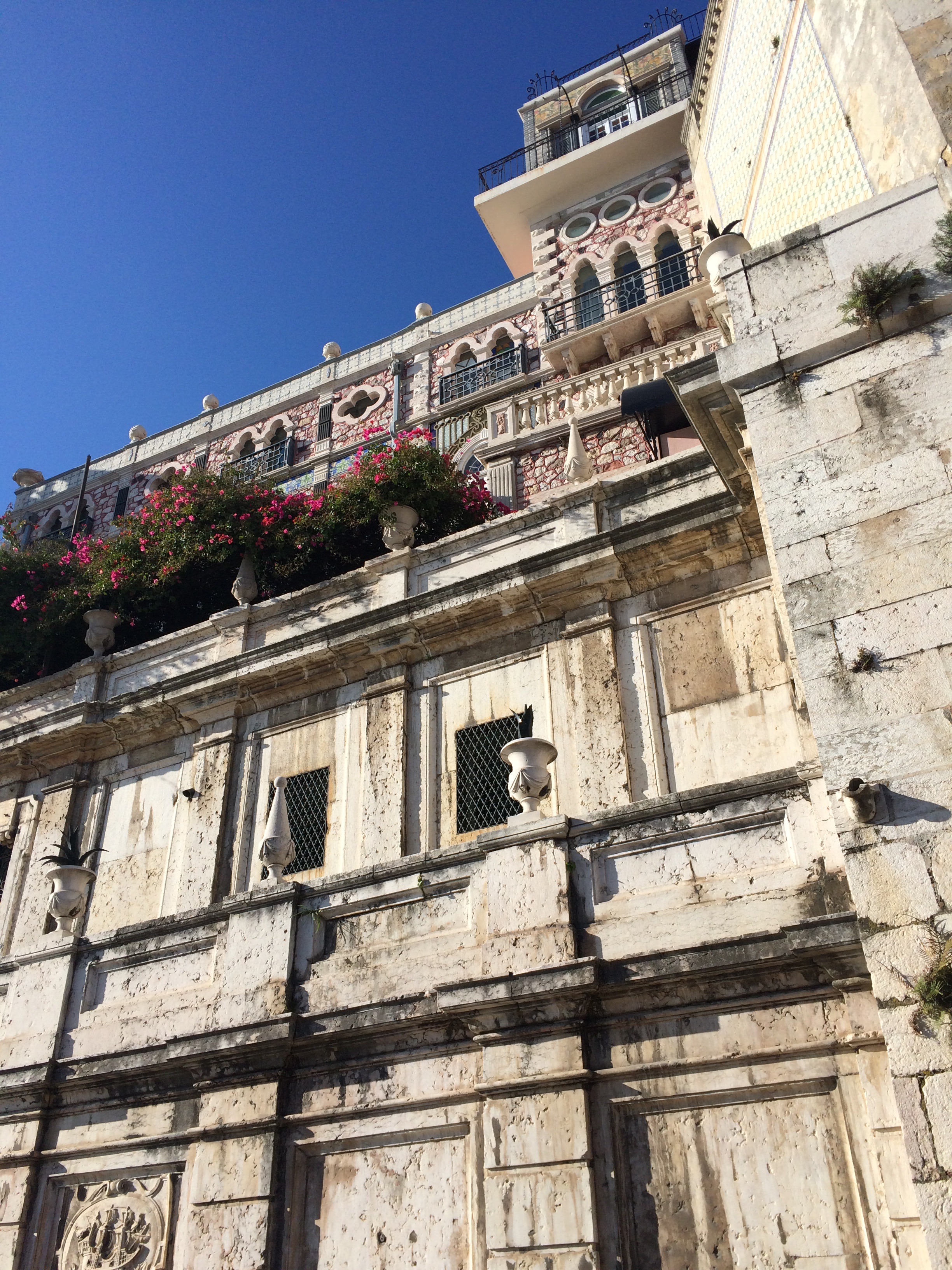 Much of the original city wall exists around the Alfama district, you can follow it around and find small gates and walking streets that lead up to the top of the hill as well as the old city well, the wall of which can still be seen in the picture above. 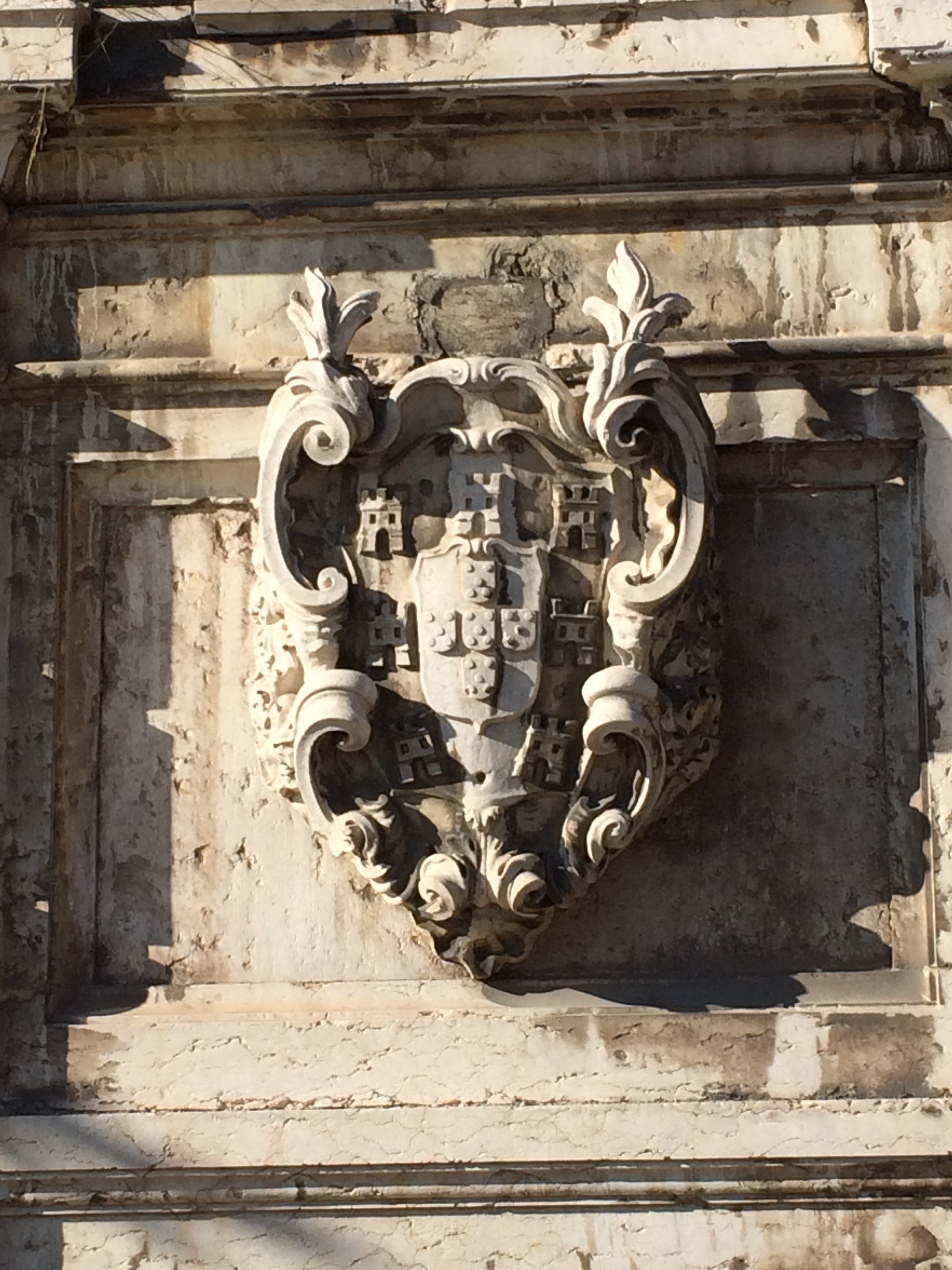 The crest on the city well, which if I remember correctly from the plaque was the original well for the main castle as well as the poorer citizens that lived outside the city walls. As you wander around the original city walls you will find many small archways which were the entrances into the city. They still exist and exist mostly as foot traffic passage ways up until the residential area of town. 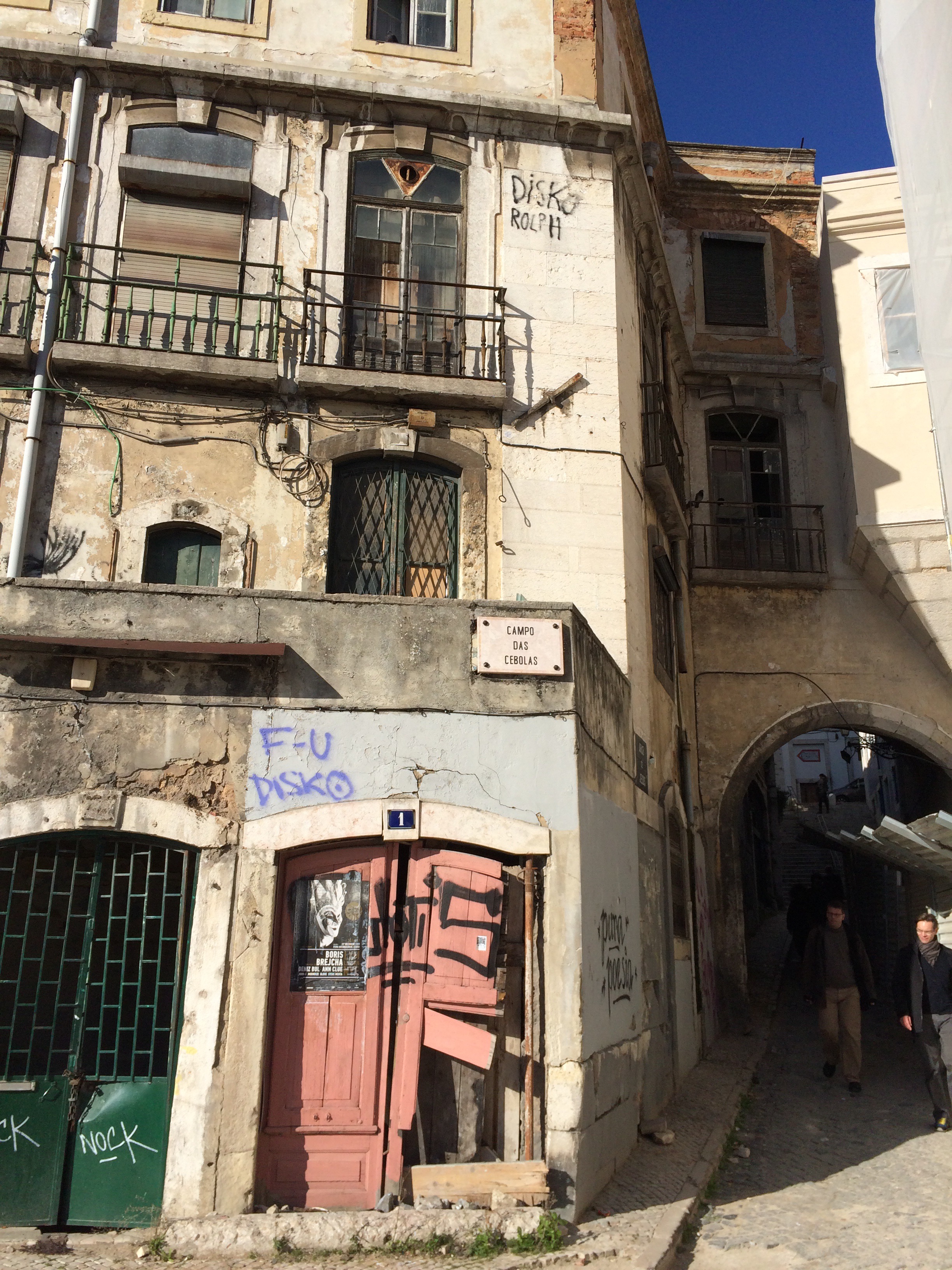 Something to note about Lisbon, they have very strict rental control laws. As such you will often see beautifully updated apartments next to dilapidated ruins. People who live in the Alfama district have probably lived there their whole lives, apartments turning over to new family members as the years go on. Because of this the area still holds a lot of it’s original charm, as well as being quite outdated but you can feel the sense of community walking through the old quarters where the city has stood for centuries, where Fado music was first conceived, where people have lived since before the roman occupation. It is quite exquisite and should not be overlooked.