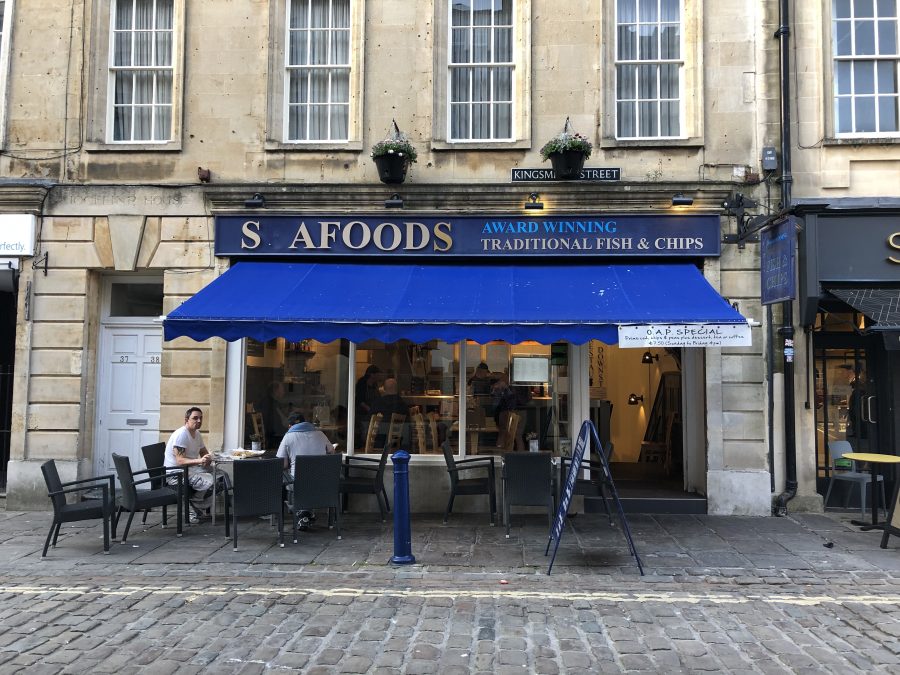 Eating in Bath England is easy to do, well lets be honest I tend to find eating anywhere easy to do! My point is Bath being a spa town, tourist attraction, weekend getaway sort of place and being home to 80,000 residents means there is a good number of great restaurants in the area.

However, I was reticent going in. I had some bad experiences with English food in the past, and with the Heathrow airport if I am being honest. So I did have it in the back of my mind that I may not be very happy with the food when we go there. I could not have ben more wrong. We in no way had difficulty finding decent food. If anything I kept eating even though I wasn’t hungry just because there was so much great food to experience.

The first place we tried was Seafoods. It was our first night, we had been traveling all day and the night before because getting to Europe from the West Coast of the USA takes an eternity. We had checked into our apartment and the hunger hit us. Need. Food. Now. And what else does one eat in England if not Fish and Chips. We searched a few places and because Bath is a bit fancy most of the places that come up were offering large fancy plates and a higher cost. We wanted authentic and local. So we picked the smaller and cheaper of our options and landed at Seafoods.

We wanted to sit outside and were told there was no table service outside. So we ordered the small of both fish and chips, we also ordered the traditional sauce and a garlic aioli from the counter and made our way outside. And then there was a bit of confusion. We were sort of forgotten about and 20 or so minutes later the women we ordered from came out and asked again what we ordered. We told her and 10 min later our food arrived but either she gave us the large on accident or in England small means something very different. It was so much food I could hardly eat half. But it was so delicious I ate way more than I really had room for.

Even though it was a Bank Holiday and the town was overrun with tourists the area and restaurant had a very local feel. Lots of folks milling about and ordering take away, sitting and eating in the park across the street from the other restaurants. And the ice cream shop next door must have been something else because the line never got below 15 people. We were both too full to try it after dinner but I will be forever curious exactly how good that ice cream must have been to warrant that kind of crowd, especially when it wasn’t the only ice cream shop close by.

Another quintessential English experience is eating in a pub. A local suggested The Raven. It a lovely little spot hidden away in a side street bustling with locals. Thus exactly what I wanted. It was clean and well kept with two bars, one on the ground floor which was extremely crowded and one on the first floor (or what we Americans would call the second floor). The bar tender at the ground floor shooed us upstairs because there wasn’t really any place to sit and I am oh so thankful he did. It was much quieter and the large windows offered a lovely amount of light and views of the streets below.

In taverns and pubs in England there is usually not table service, you order at the bar and pay on the spot. I ordered two different kinds of pies, sauces and sides suggested by the bar tender because I had no idea where to start and shortly our food was delivered. I could rave about how good those pies are all day but I won’t. If you ever find yourself in the area just make sure you go and try them yourself. Chicken and ham pie, with mashed potatoes and sage sauce. Don’t question it, just order it. You can thank me later.

Another English staple is the afternoon tea service. Though surprisingly this is relatively new tradition to the English people. The drinking of tea has been a part of English society for a very long time but it wasn’t until the seventh duchess of Bedford (Anna) that the idea of a light meal service between lunch and dinner was popularized. Among the landed gentry it was not uncommon for dinner to be served after eight pm, leaving a good long stretch in the day with no food. Thus the habit of afternoon tea complete with snacks was born.

There is no shortage of tea services in Bath. I have mentioned that the Pump Room which is associate with The Roman Baths offers a variety of services from just scones and tea all the way up to champagne service with a tray stacked with goodies. Emma from Gotta Keep Moving has a nice run down of the more popular places to take tea in Bath. If that is the sort of think you are looking for.

Operating as my truest self I of course opted for the least assuming location for an English tea service, a French patisserie. I will be honest the location, lack of line and low cost had nearly everything to do with the decision but it did not disappoint. Patisserie Valerie was established in 1926 and operates out of a art deco store front complete with original windows and glass vaulted ceiling in the main dinging area. It isn’t large, the service was a tad slow but the tea hit the spot and the tower of food was outstanding. It turned out to be so much food in fact we had to take all the desserts to go and ate them later that night in our apartment.

Cornish Pasties probably seem like an odd drawn when not in Cornwall. But much to our delight there was a large density of Cornish Bakeries in Bath which meant we got to eat the foods of Cornwall even though we didn’t have time to visit it (this trip).

If you are unfamiliar with the tradition of the pasty. It is similar to a hand pie or empanada. A circle of short cut pastry is filled with uncooked meats, sauces and vegetable, folded in half, sealed and cooked to perfection. We visited a couple different locations, both claiming to be award winning and famous and all that. Both were excellent.

The first was the Cornish Bakehouse which has several locations across England. We ate here on more the one occasion, for one because it was great but it was also conveniently located on the way to the train station so it made for a quick stop on the way to where we were headed. They also had their pasties out of the oven sooner than other locations which didn’t hurt. I think my favorite meal of the entire trip was here, it was a surprising red chicken curry pasty that I am determined to recreate now that I am home.

The other location we tried was The Cornish Bakery which also has a couple locations in Bath, one of which is right across from the Pump Room near the baths. We excited our apartment a tad too early on the day we left Bath and it had started raining so we chose to wait it out in the tiny little bakery. We had tea and a delicious carrot cake while we waited and then took a sandwich and sausage rolls to go. On second though the sausage rolls may have been the best thing I ate in England. I will probably change my mind again. It was all too good!