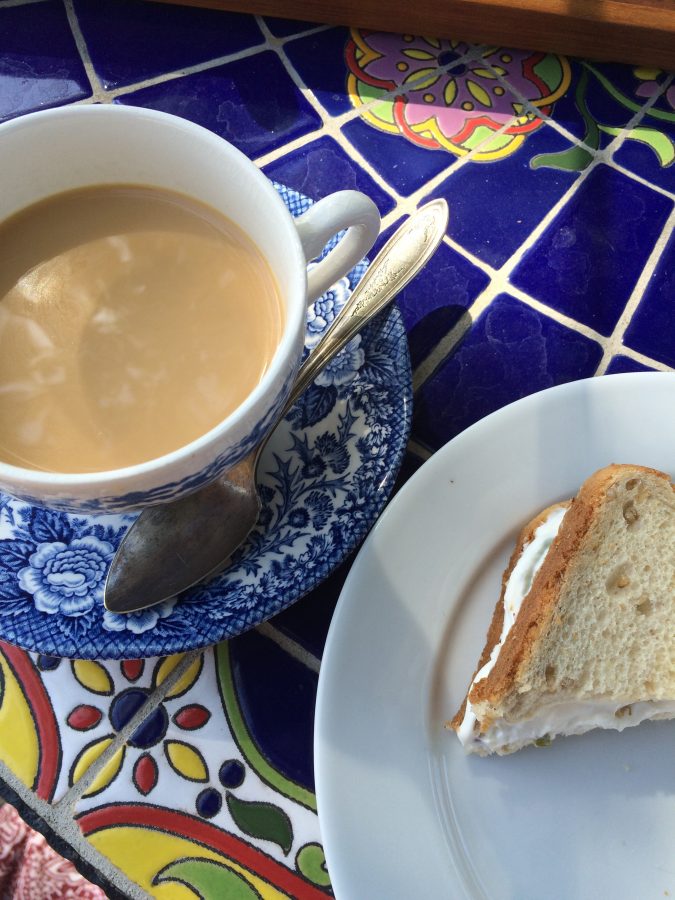 I have yet to make it to England, but high tea has always interested me. The history, the ceremony, fancy china, food, tea, fancy dresses…short of somehow gracefully inserting a taco course it is basically the greatest meal ever invented. 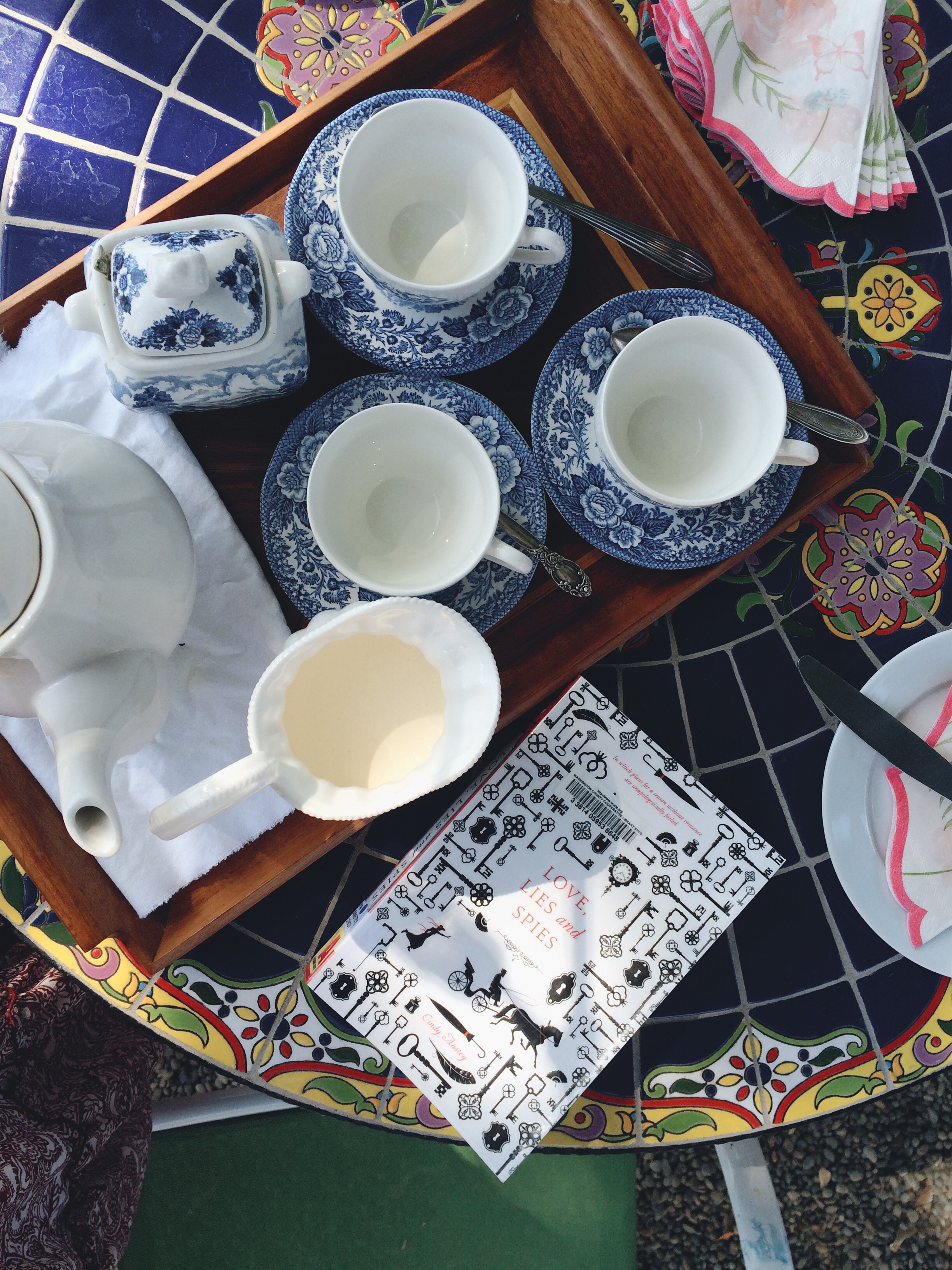 **Need inspiration to throw a party read this book! Super sweet YA story**

The only two times I have had high tea were while on vacation. Once at the Peninsula Hotel in Chicago. The second at the Grant House in Vancouver Washington. The tea service at the Grant House was very quaint. It had rained fairly hard that afternoon and I had taken the opportunity to explore the Fort Vancouver area a bit. Unfortunately I had found myself as far away from the Grant House as possible while still being in the park right when it started raining, hard. By the time I got back I looked like a drowned rat. I spent most of the afternoon sitting in a very old-fashioned and formal sitting room drinking tea and eating biscuits while trying not to drip water everywhere. 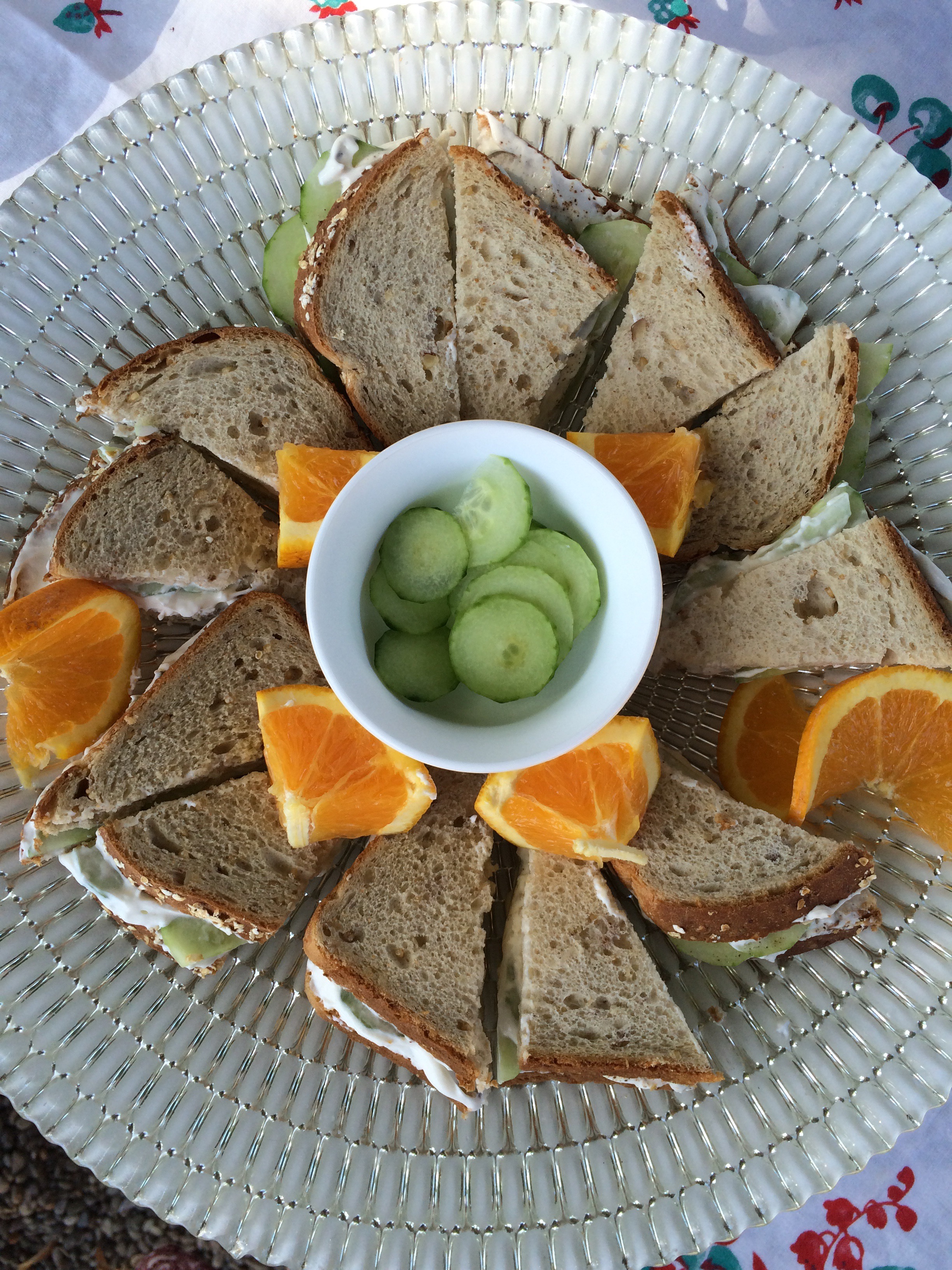 The Peninsula Hotel felt like I needed to be a Kennedy to fit in. Surrounded by socialites, investment bankers and an entire table of the upper echelons of the Chicago archdiocese. It may sound like a set up for the worlds greatest joke but it really isn’t.
Though when I sauntered off to the restroom and  slid across the hall way and gracelessly fell into the door I felt like a bit of a joke. Not to be out done by my second trick however, I accidentally  broke the faucet on the only sink in the bathroom causing a large volume of water to come gushing out into the main hallway. Just another day in the life. You are welcome world. 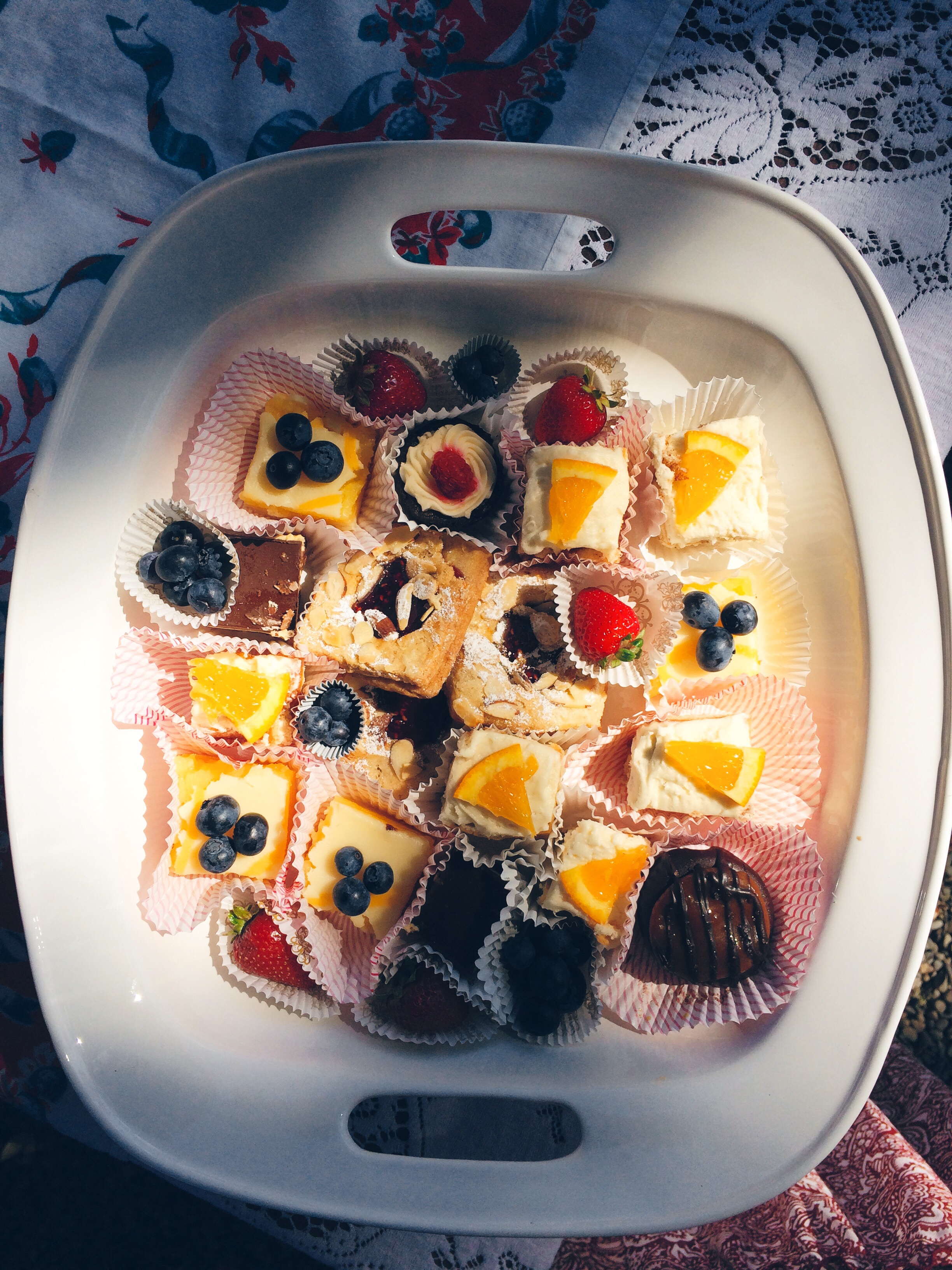 High tea services tend to be fairly few and far between out here on the west coast. Then when they can be located aren’t at the best times for those of us that keep regular office hours, or find spending an inordinate amount of money for cream tea and snacks. So a few weeks ago, on a whim I asked a friend if she wanted to have tea at her house and I set to work. 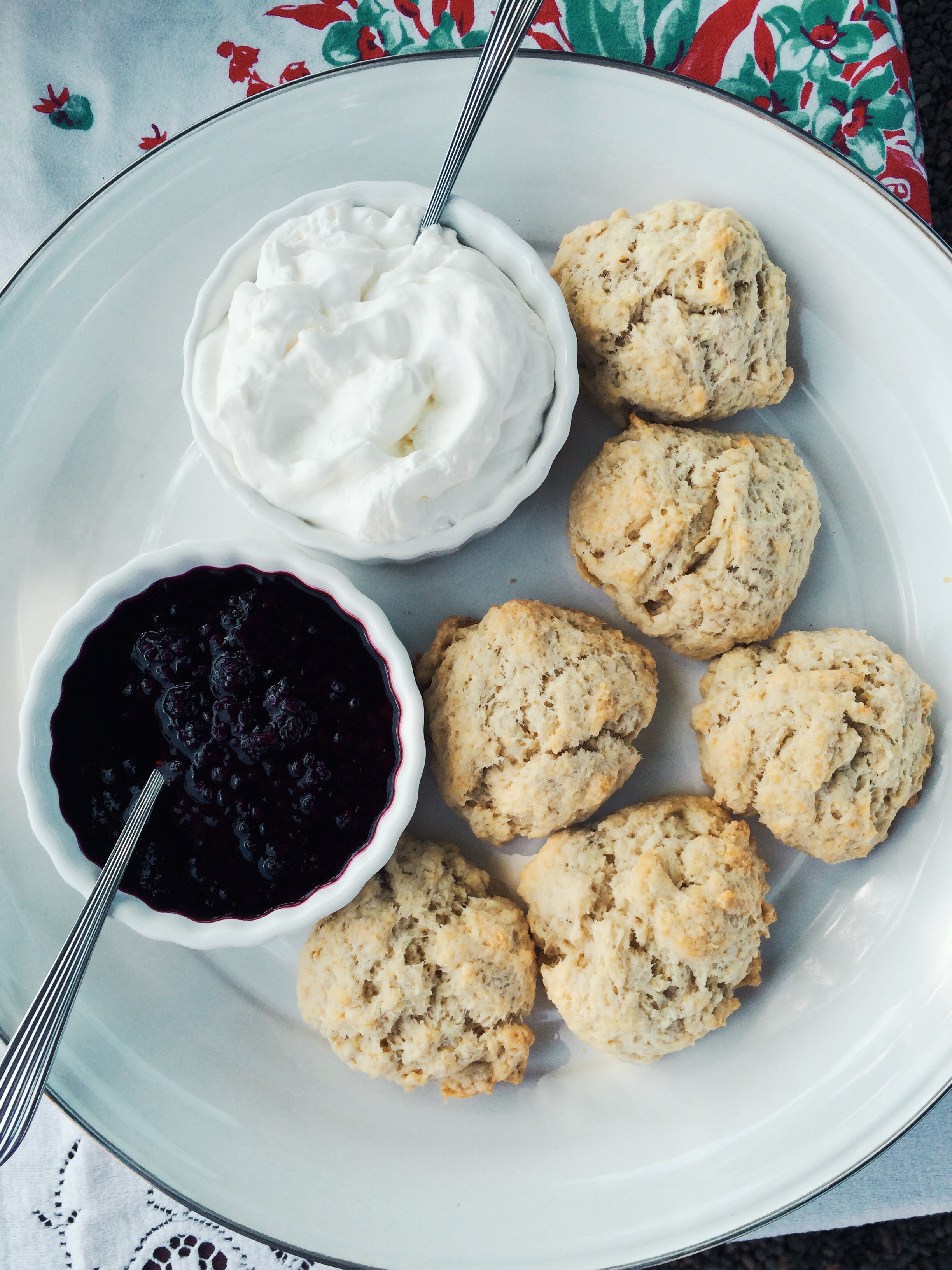 **Scones course, there is nothing better than jam and clotted cream**

Turns out creating a menu for a high tea service is incredibly easy. It took me all of an hour start to finish to put together the meal. 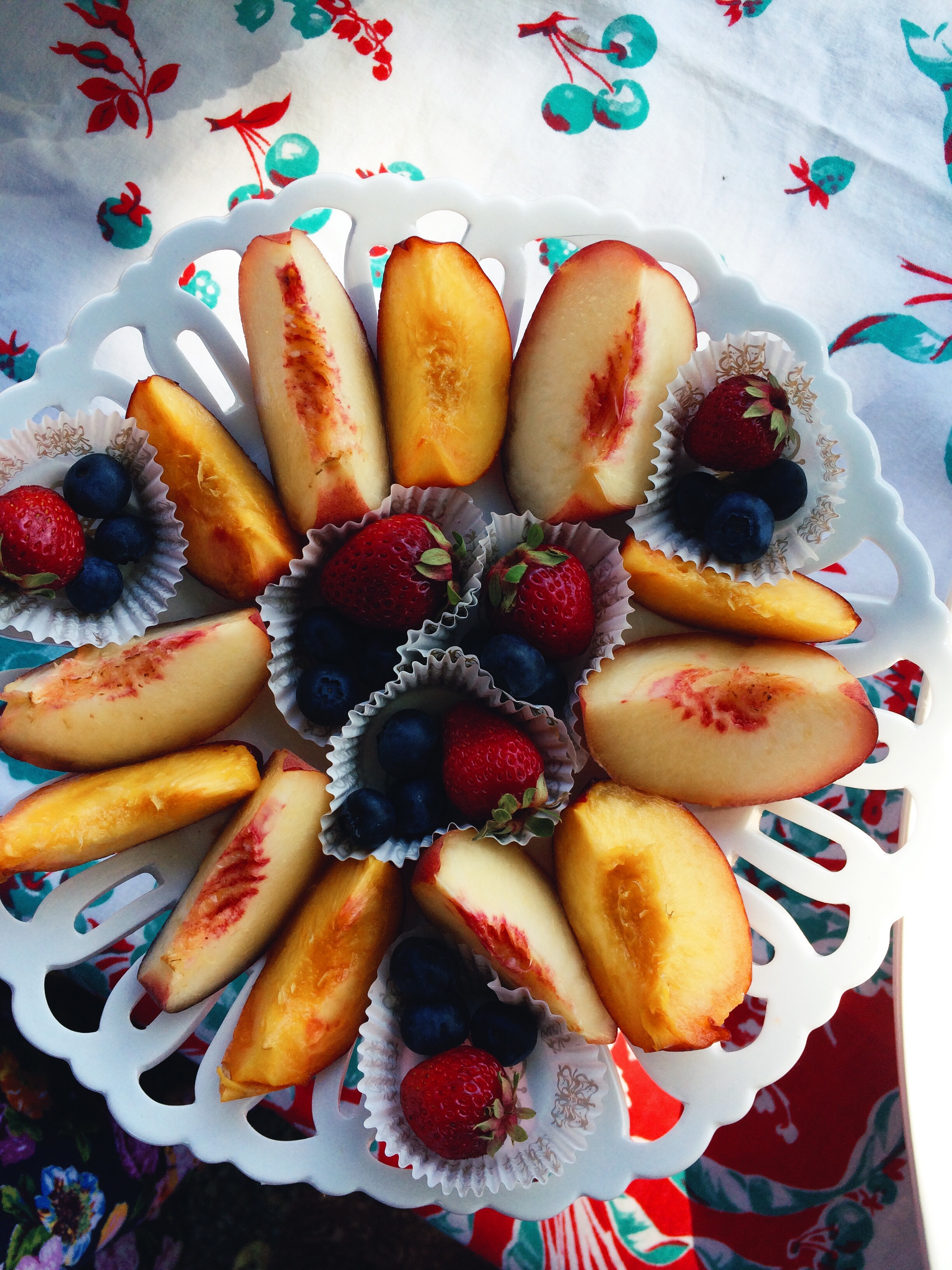 **We added a fruit course as well**

Clotted cream – I have read a bajillion recipes about how to make this. Most involve leaving cream in the oven for 12 hours. I’m lazy, so I did this instead.
– 1 cup heavy cream
– 1tbs powered sugar
– 1/3 cup sour cream
Whisk, whip, beat or will into existence whip cream by combining sugar and heavy cream. Stir in sour cream, et voila.
Scones
– 2 cups all-purpose flour
– 1/4 cup white sugar
– 2 tsp baking powder
– 1 tsp salt
– 1 stick cold butter
– 1/2 cup heavy cream
– a few tables spoons of cold water.
I make my scones a lot like I make my pie crust. Combine dry ingredients in a bowl. Grate or finely chop cold butter into dry ingredients. With a sturdy fork, cut butter into flour mixture until it resembles sand. Stir in whip cream, add cold water one table-spoon at a time until no longer dry, but slightly sticky. Cut down into one inch round balls, put on greased cookie sheet and bake at 350 until starting to turn golden brown. 20 or some minutes but oven temps vary so much it’s hard to say.
Serve scones with cream and jam.

This one I never make anything for. The ideal high tea has a wide array of fussy little confections. To achieve the proper assortment one would wind up baking for days and have an entire kitchen full of sweets. Just go to your local bakery and pick a couple tasty looking treats that you can cut down into bite sized bits. 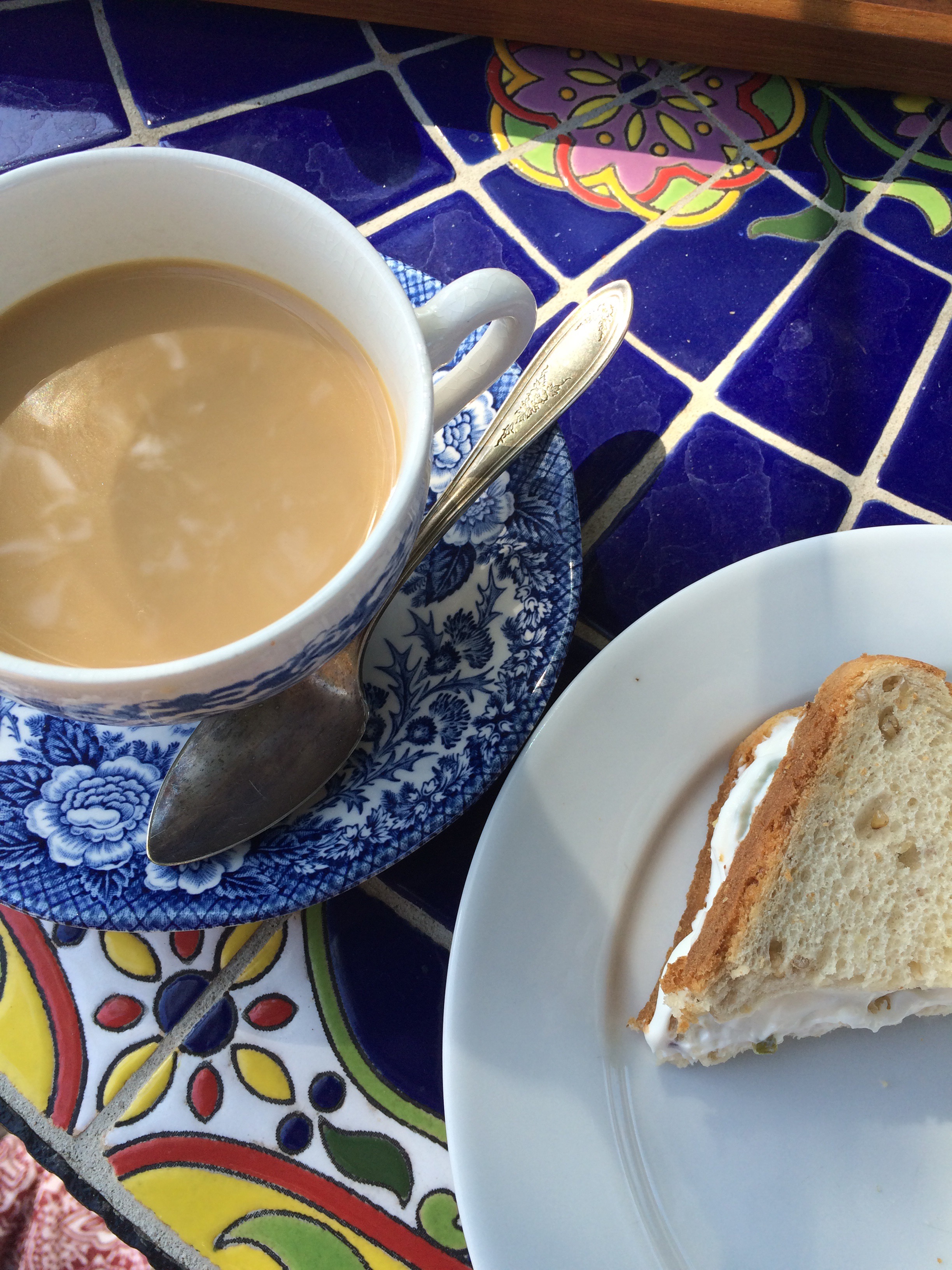 Tea and set up: 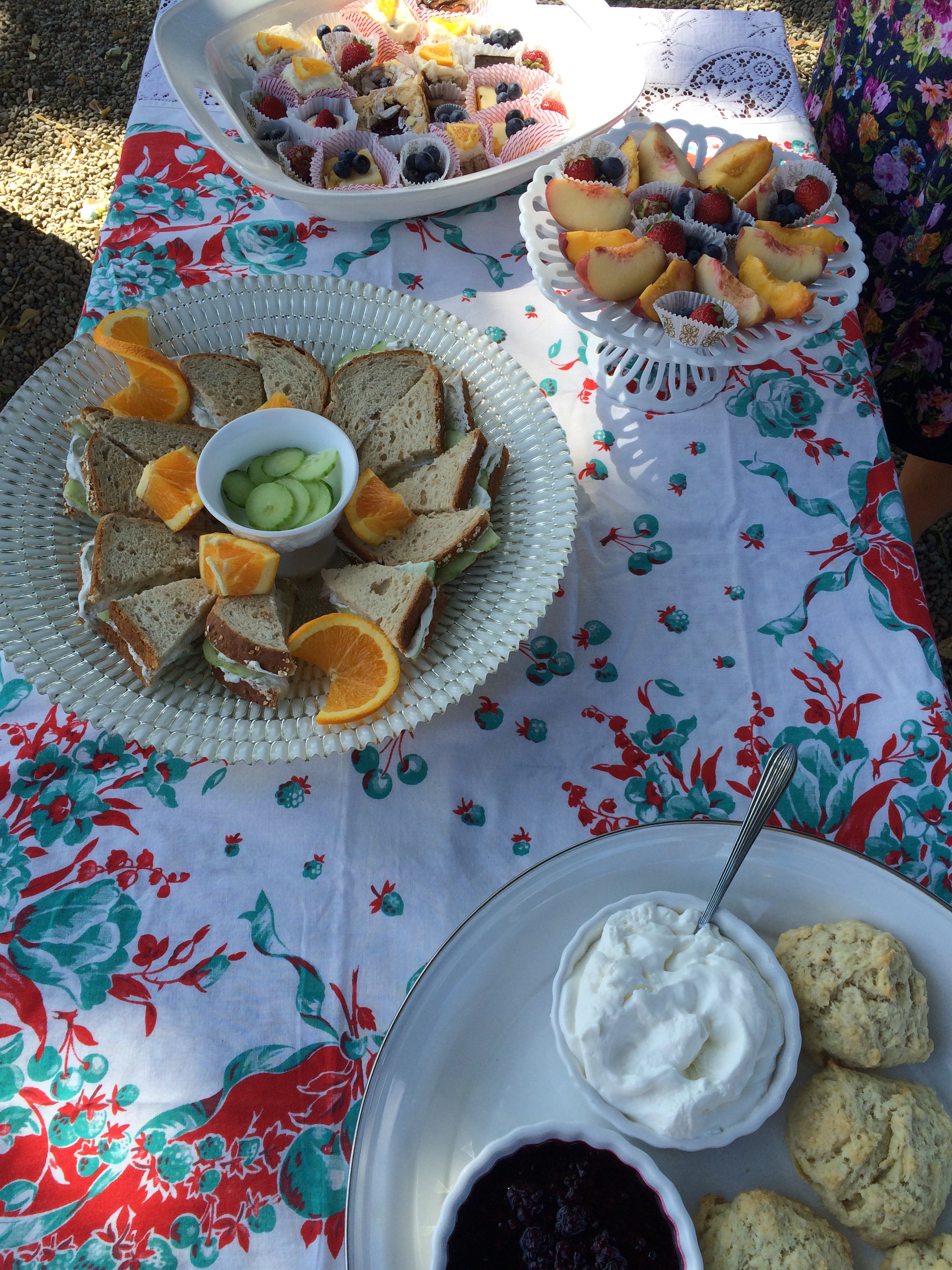 Arrange your trays however the mood strikes you. Eat, drink and be merry!