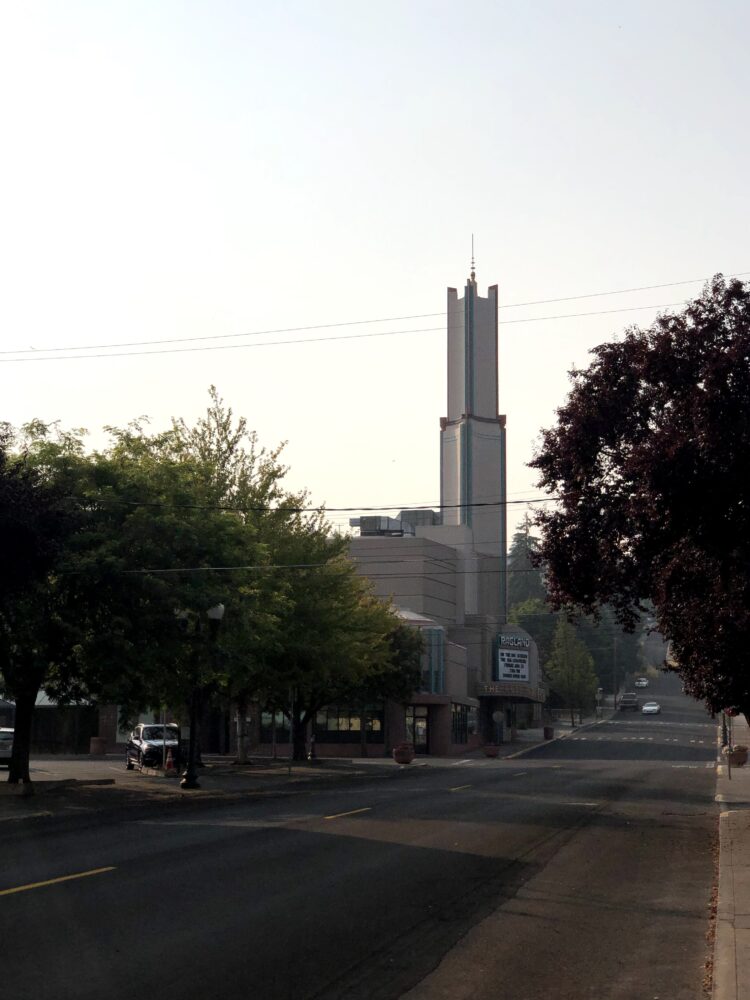 Towards the end of the summer of 2020 I was starting to get really itchy to travel, we had finished settling in to our new house, the pandemic seemed like it would never end (still doesn’t) and I was ready for an adventure. So we decided to explore some new parts of Oregon. We were already a couple hours south of home due to the horseback wine country trip, so we hit the road and continued south. I never thought I would be exploring Klamath Falls Oregon during a pandemic, but last year was weird for a lot of reasons.

We sped down I5 for a couple of hours and then hopped over the cascade range and figured we were “this close'” to Crater Lake we may as well take a slight detour, it had been years since either of us had been there. Turns out it was the beginning of one of the worst fire seasons in Oregon’s history and the smoke was so bad they were turning people away at the park entrance. Disappointed but ever optimistic we turned around and continued south to Klamath Falls. 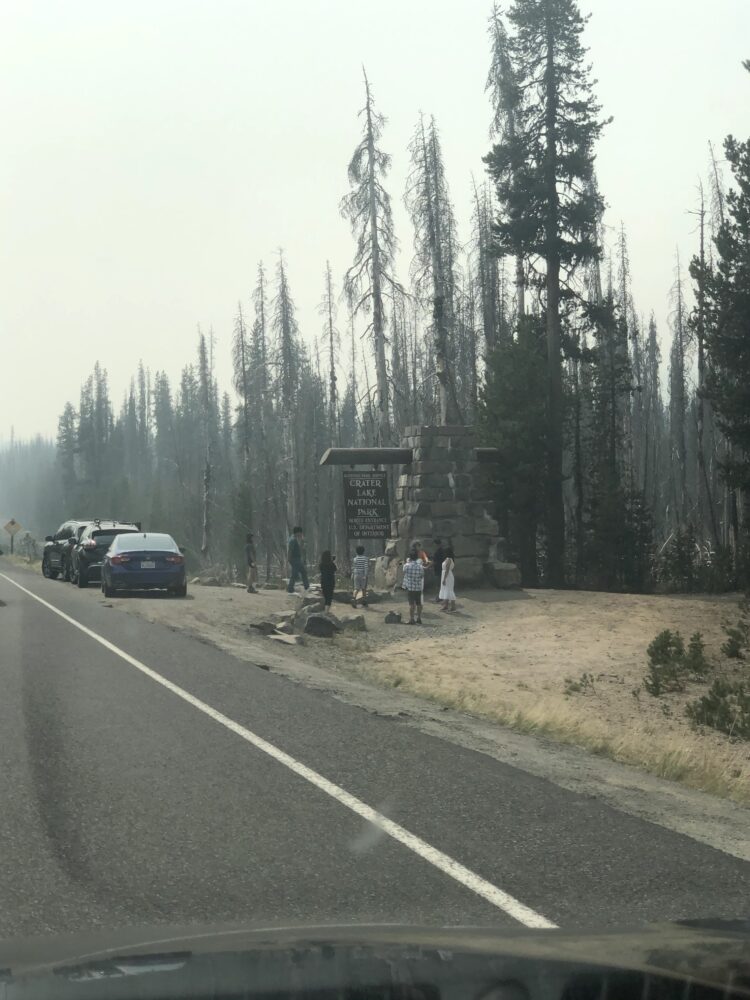 Klamath Falls is a great jumping off point for any number of outdoor activities, but as it turns out when half of the towns services are shut down for a pandemic and the other half due to air quality there isn’t a ton available for adventuring tourists. So had it been a normal year this post would have likely been a lot more interesting but we had fun all the same. We came in mid day, thoroughly enjoying the views of the lakes as we drove in, and by thoroughly I mean we enjoyed imagining how beautiful it would have been had we been able to see much of anything. The temperature was inching upward of 100 degrees so we went straight to our hotel so we could get our things out of the car. We ended up staying at a pretty standard non-descript hotel. It was clean, safe and comfortable. After getting settled we drove over to the downtown area hoping to hit up a few local boutiques and find somewhere for dinner. 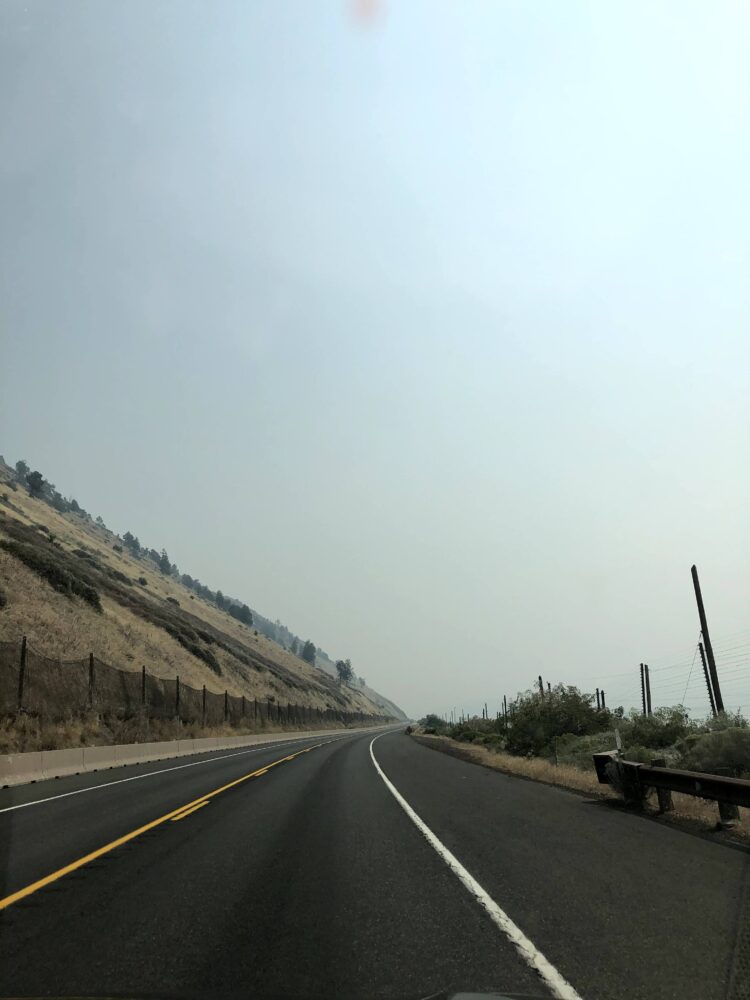 Like most Oregon towns, Klamath Falls is full of beautiful historic buildings which I am always a fan of. The town was founded in 1867. The original inhabitants of the area were the Modoc or Achomawi natives, its proximity to a large watershed and natural marshlands made it a good settlement place in an otherwise fairly dry part of the state. The Applegate Trail (one of the many trails that make up the Oregon Trail) passed through the area. In 1906 some of the marshland was drained for agricultural purposes and later some of this land was given over to veterans of World War 1 and 2 for homesteading. Timber and cattle were two of the largest industries in the supplying funds to build some of the more impressive historic homes in town. Our personal favorite was this Queen Ann style home build by John Goeller  in 1904. It has obviously seen much better days, which is a shame.

The downtown area was clean and well kept, if not entirely deserted. All the shops and restaurants were closed due to pandemic and air quality. Though there were quite a few really fun looking second hand and antique stores we were dying to go into. The city of Klamath Falls had suffered a fairly significant series of earthquakes in the early 90s so much of the downtown has since then been restored but unfortunately many of their historic buildings were lost during this period. 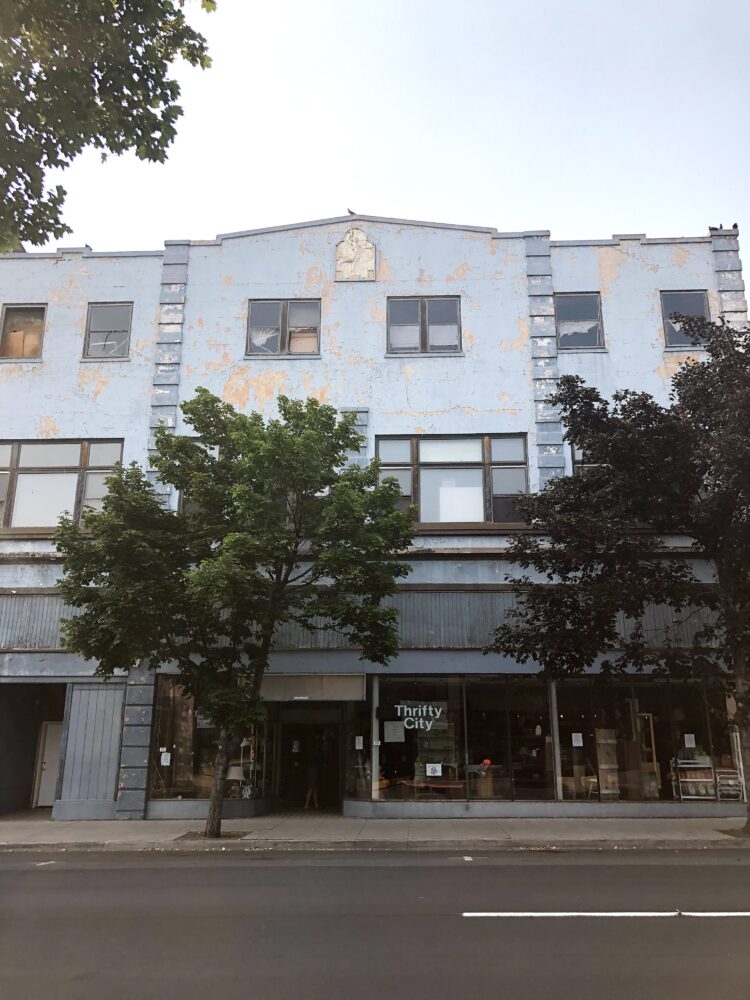 The Williams Building was one of my favorites. IT was built in 1926-27 by Jamison Park of Parker and Bamfield in the Italian Renaissance style and the bas relief style highlights the two main industries of the area. I believe it is now a pizza shop among other businesses. 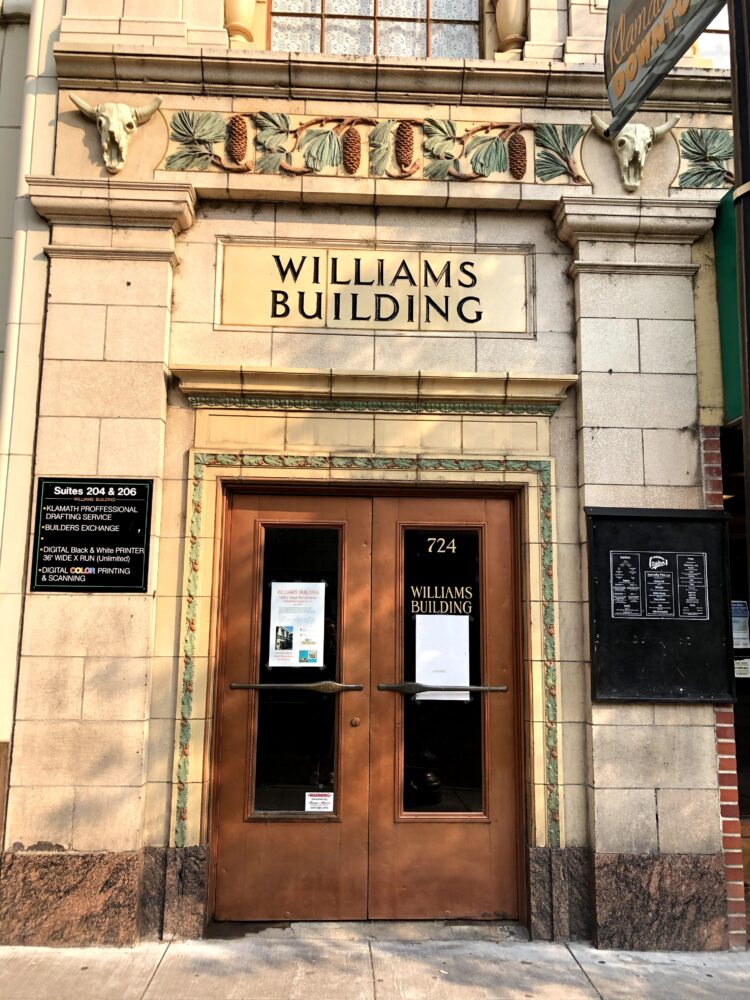 After wandering around and taking way too many pictures of buildings we settled on eating at a Mexican restaurant that calls a beautiful historic bank building home. It was also the only place in town open for dine in eating. But lucky for us it tuned out to be quite good. Part of me was thrilled to get to eat inside such a gorgeous building and happy that the building was in use. And part of my was a little disappointed in the repairs which involved a lot of dropped ceilings and zebra hides tacked up the walls. It’s always an adventure isn’t it. 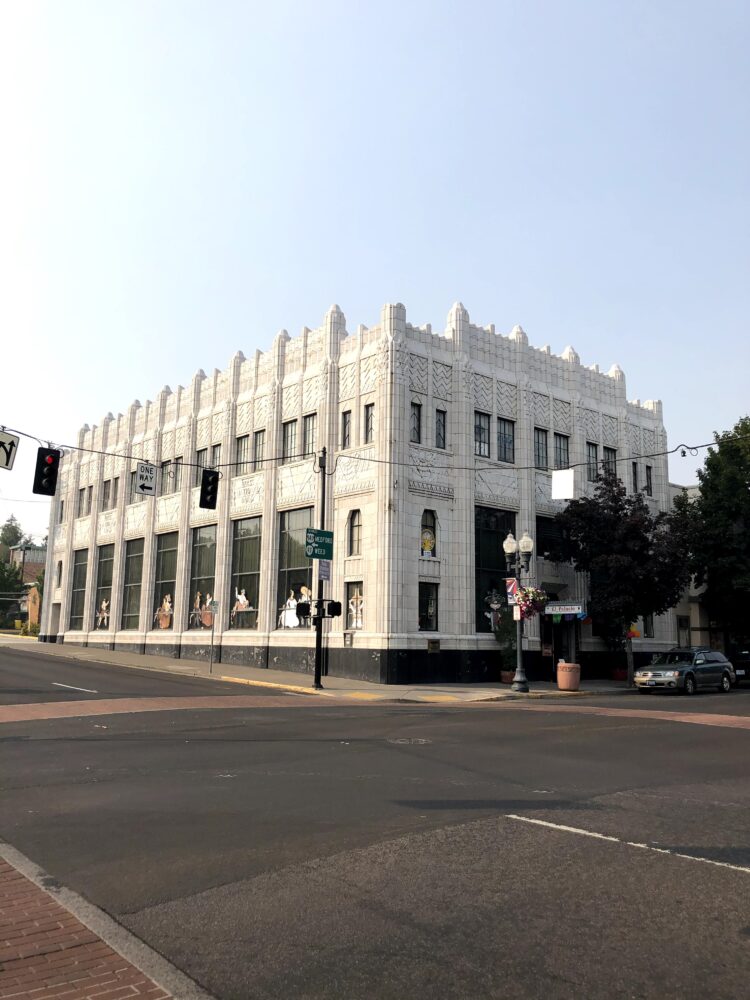 After dinner we returned to our room for the night and the next day we headed off to Ashland Oregon for our next adventure. I would have loved to visit this town when things weren’t quite so shut down, but in travel things are never exactly how you expect. So it’s always important to enjoy what ever adventure comes your way. I still had a great time exploring Klamath Falls Oregon during a pandemic. 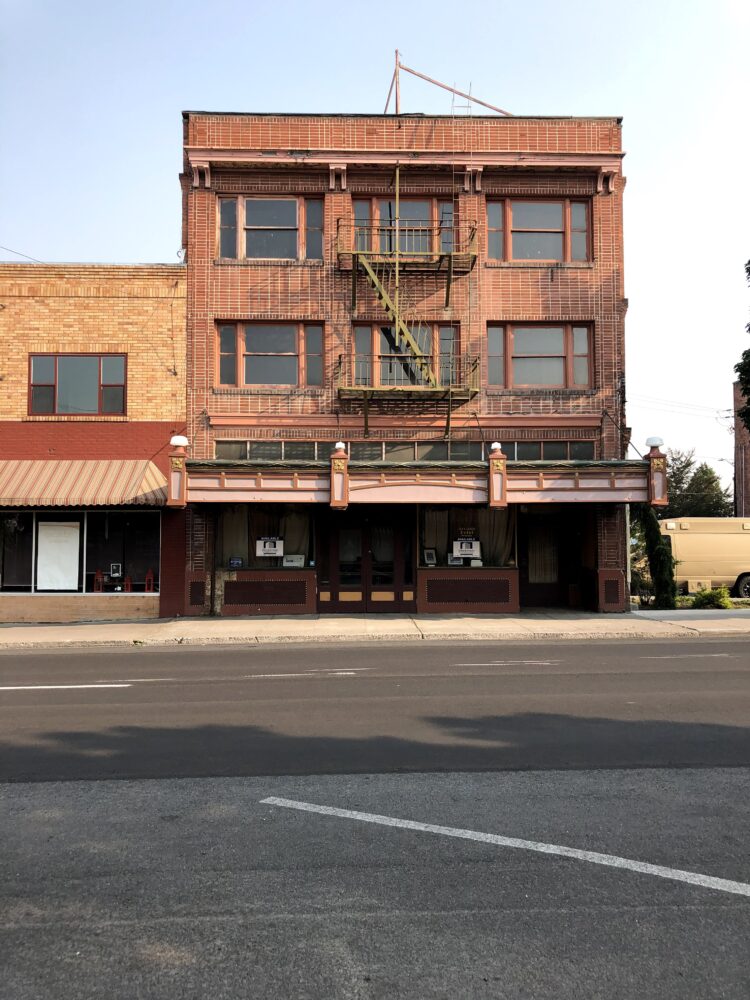