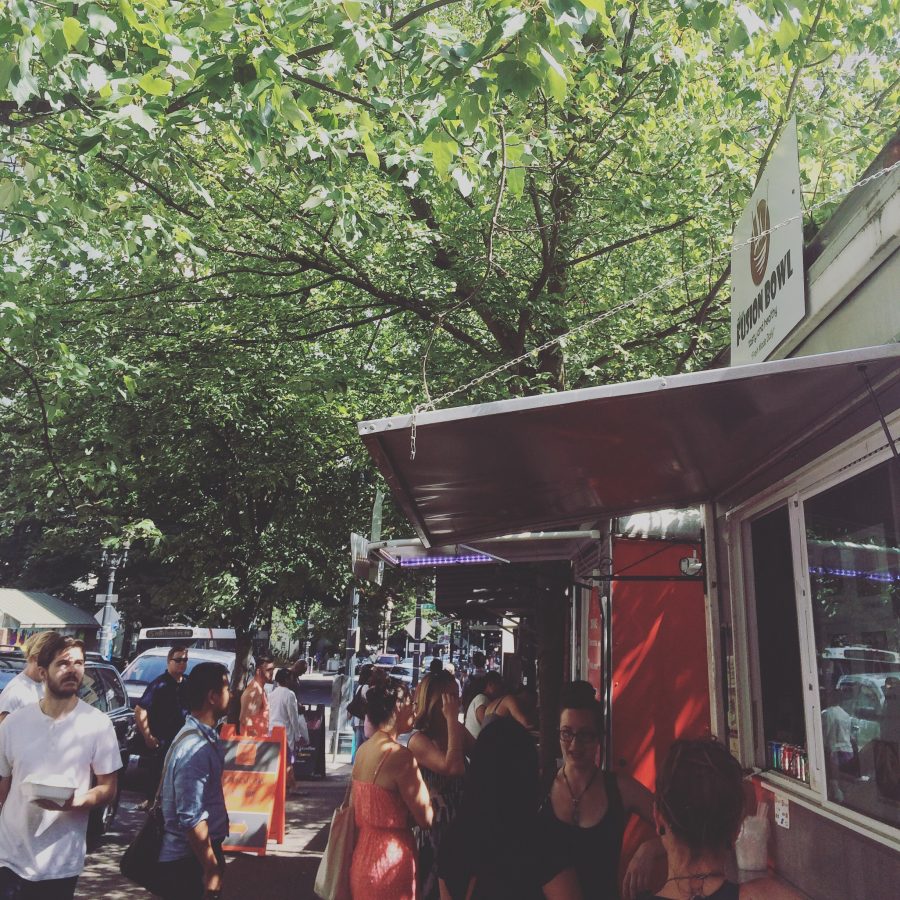 Back in August we were invited to a friends birthday celebration. These are the types of friends that you hardly ever seen, but would drop everything if you needed help. Some of the very best people I know. So it was a no-brainer to say yes, even though I have no idea what we were doing.
About three days before the party I got an email from the host and found out we were doing a food walking tour downtown. I groaned. Don’t get me wrong, I LOOOOOOOOOOOOOOOVE to eat. But I do not love being in the city, on a weekend, in the summer, when its going to be 100 degrees. However, we love these people. So I put on my big girl pants (dress) and my big big girl sun hat and braved the hour drive.
When we got to the meeting place, The Picnic House we had the pleasure of meeting the lovely ladies at Forktown Food Tours. Heidi is a fantastic tour guide, her enthusiasm for both food and Portland is infectious and the three hour tour went by far too quickly. 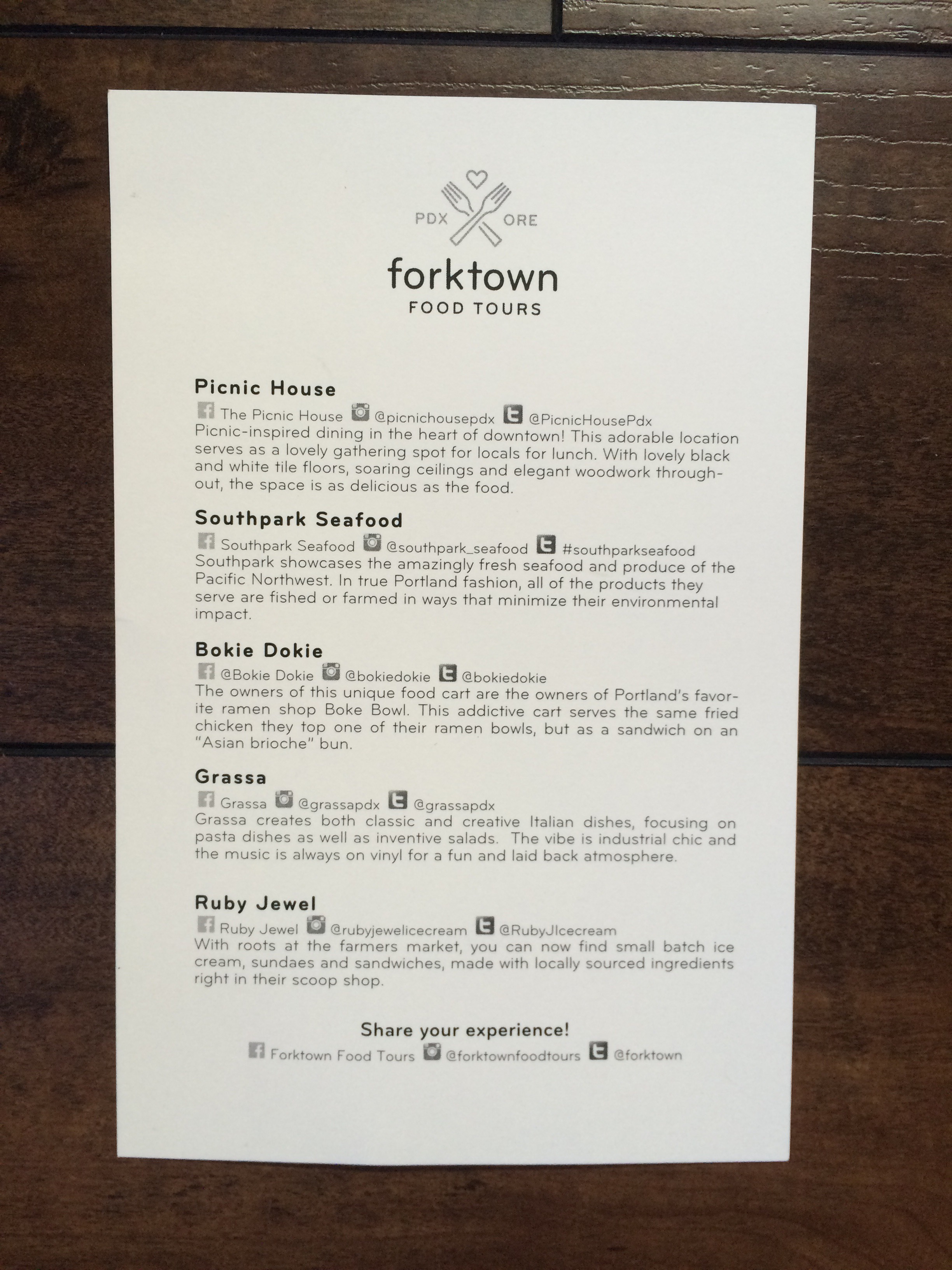 **Our locations for the day**

As I said we started at Picnic House, which was the original location of the Healthman Hotel.  They served us a delicious beet and arugula salad as well as a raspberry shrub cocktail. I don’t eat beets, they taste like dirt. These beats didn’t taste like dirt, they tasted like….well I guess beets but for serious that was an amazing salad.
Our next stop was just one block down at Southpark Seafood. Having drown up in Alaska I tend to not eat a lot of seafood that didn’t come from my family. But when they set the tray down with smoked butter fish, crème fresh, crackers, brie and pineapple jam, wow! I ate as slowly as I could manage, I think I nailed the stop speed for socially acceptable dining. The Pinot Gris they paired with the plate was heavenly. At this point I had reached by two drink maximum and it was now officially way too hot outside.

Our next stop was a food cart called Bokie Dokie, a location I have not yet made it to despite working only three blocks from the cart. We were given a kimchee fried chicken sandwich. I think I found my new favorite lunch spot. I normally visit Korean Fusion for chicken tacos, but this will make a nice addition to the regular menu.
At this point I was not only drunk, hot but so full I was ready to pop. I swore I would not eat the next meal and then we went to Grassa. They set down a very reasonable sized portion of summer ragu paired with a fantastic rose in front of me to which I thought just one bite so I am not rude. I ate the whole thing. I may have blacked out. It was some of the best pasta I have ever had, including the various regions I have visited in Italy. 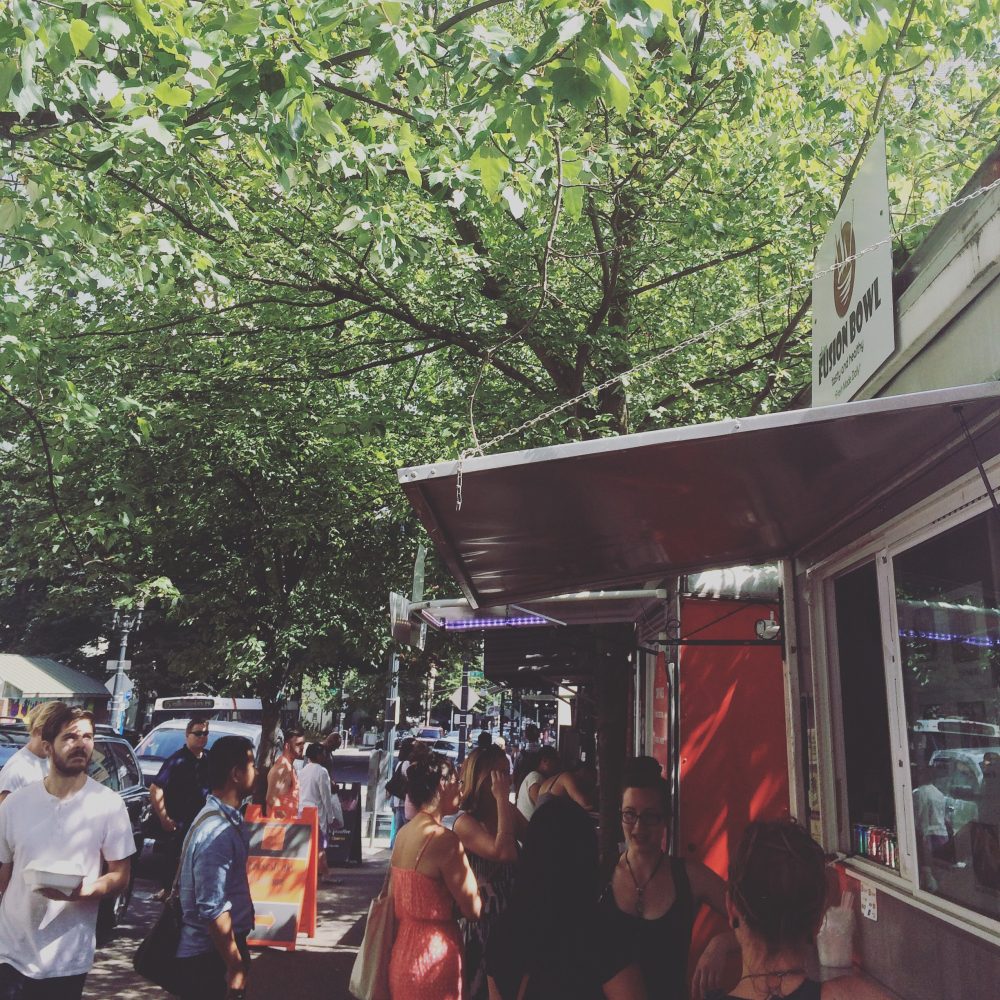 Our final stop was Ruby Jewel icecream, we had a tower of ice cream sandwiches which we ate dripping down our arms while standing on the street singing happy birthday like a bunch of fools. It was the best day ever.
I could not say enough wonderful things about Forktown Food Tours, they ladies were wonderful, the locations were delicious, the portions were prefect (assuming it is a normal temperature outside and you are a larger human than I am). I would highly recommend the tour for anyone who is visiting the Portland Metro Area or really anyone with time on their hands. We might have to revisit for a weekend day date someday.