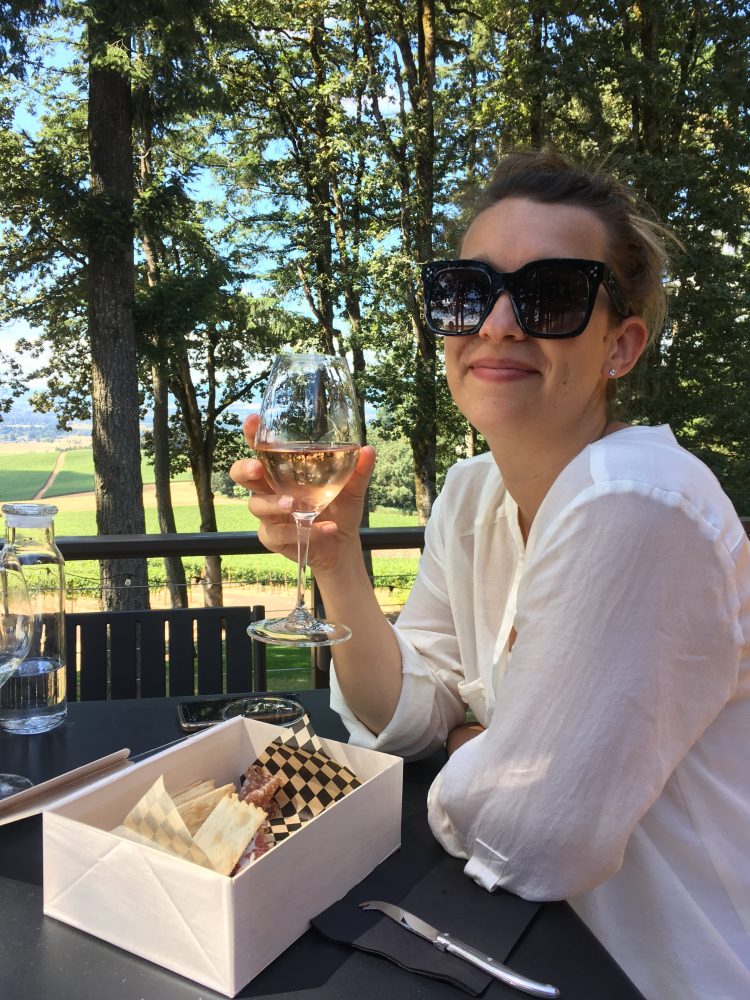 Horseback riding through Oregon’s wine country is not something I ever really thought I would end up doing, but as it turns out it is the best way to go wine tasting. As long as you don’t drink so much you can’t stay on your horse.

To ride horseback and taste wine you do need to book a tour. I am sure there are some regulations somewhere that would allow you to BYOH (bring your own horse) but I have zero information on that and lets be honest that is probably extremely difficult to coordinate between local land owners, tasting rooms, locating places to tie up your horse while you are inside and just general traffic laws of the area. 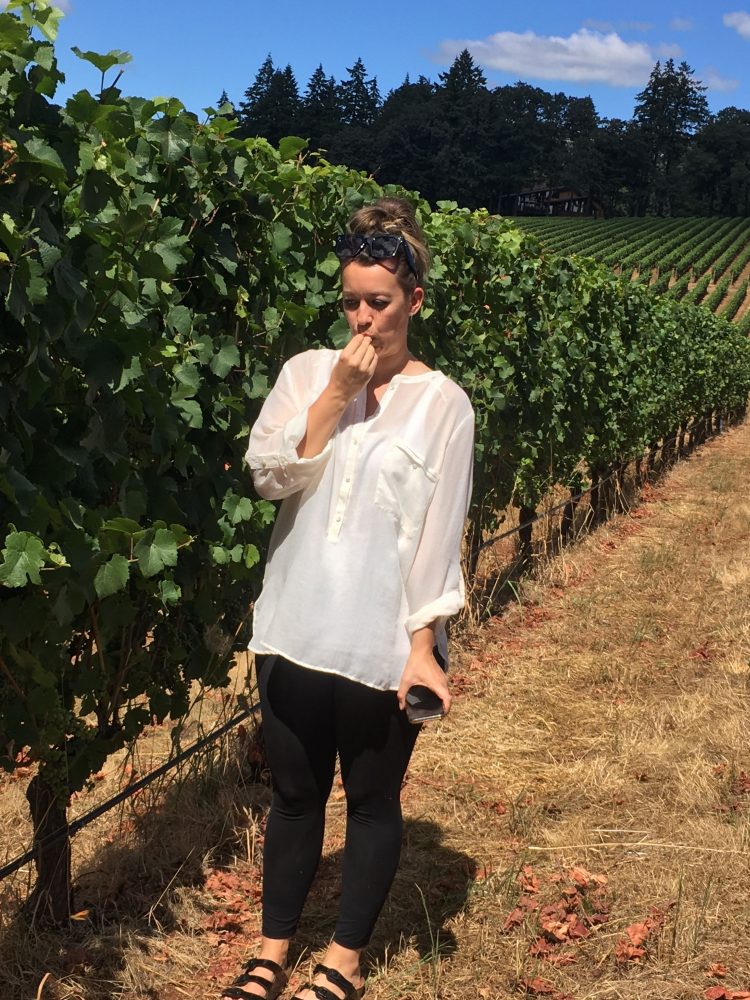 We chose to take the Dundee Hills tour through Equestrian Wine Tours . Our tour was only about 3 hours total, which was perfect for a newer rider. But if you are experienced and looking for a full vacation trip then it looks like these folks offer 5 day tours in the Oregon area, as well as many other destinations around the world. If Dundee Hills isn’t what you are looking for there are tours here offered in the Hood River Area which is quite stunning. 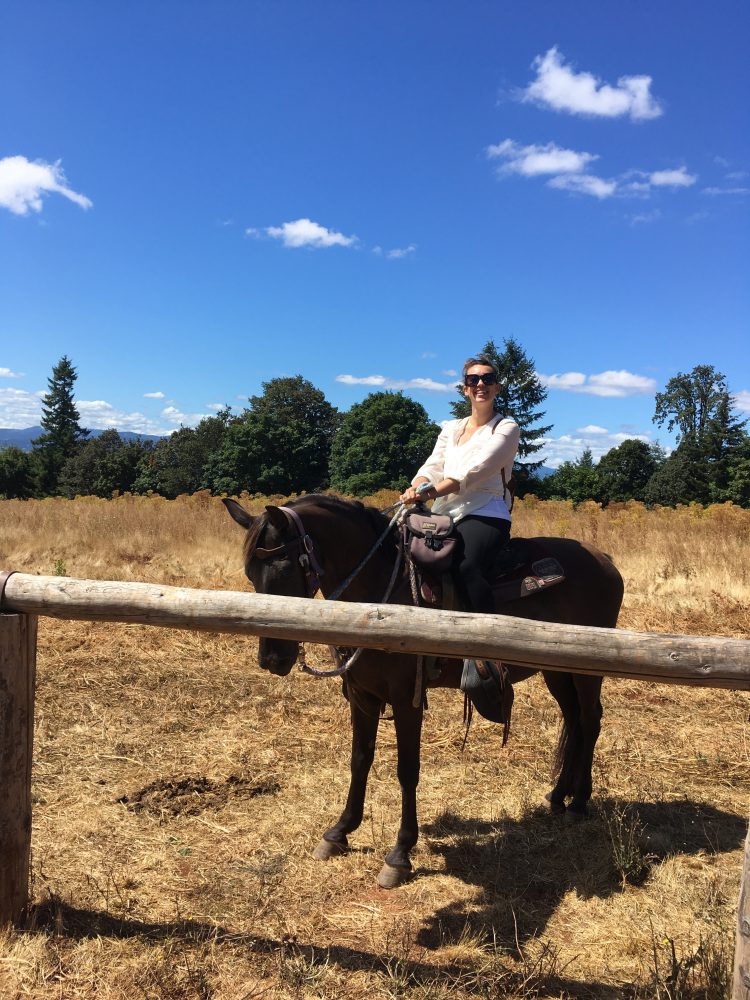 As I mentioned we  booked through Equestrian Wine Tours and couldn’t have been happier about the entire experience. We got to visit two tasting rooms in the Dundee Red Hills and rode Tennessee Walkers between three tasting rooms making a full circle. The tour was long enough to feel like you got a good value for the cost, but also short enough that you could still walk the next day. First time horse riders beware, your bum will hurt. It was also very user friendly, I hadn’t been on a horse in more than 25  years and with just a short 5 min run down of how to get on and how to keep them moving in the right direction we were off and up through the vines. 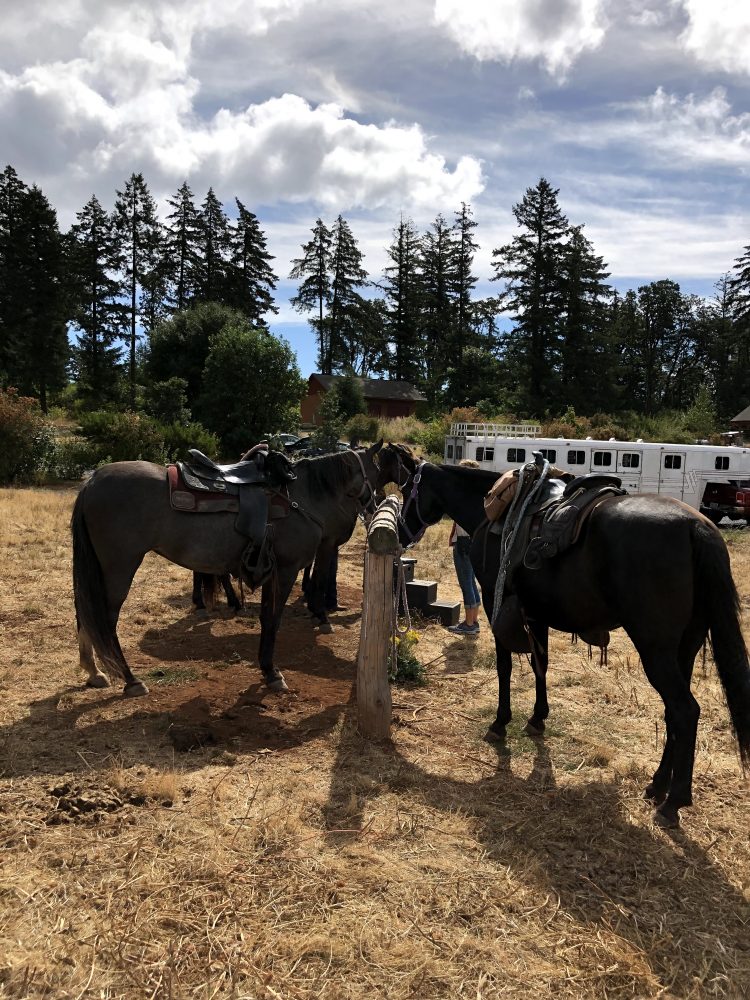 Amber, our tour guide was incredibly patient and kind regarding all newness in handling horses and also very knowledgeable about the area, the wineries that we visited and all the other random topics I wound up chatting her up about.  We started out at Winters Hill Estate where you would normally get to taste but due to restrictions around occupancy we couldn’t get in that day. Winter’s Hill Estates is the meeting place, as well as a stop on the tour. But since we weren’t tasting there we just got right down to business. After our short survey of experience (we both had none) Amber chose the horses based on temperament and ease of handling for each of us, helped us get up on the horses and provided a quick tutorial on how to handle them. I was given Gigi for the day who was the larger of the two but very gentle. 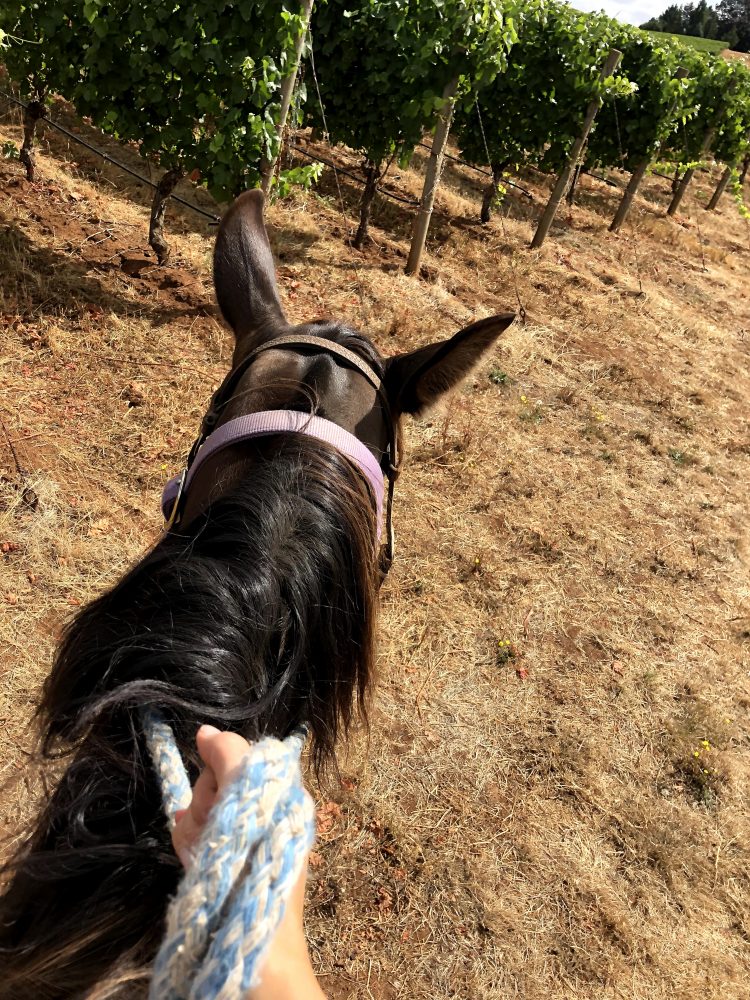 We  set off through the fields between vineyards and then rode up through the vines which was quite the adventure because all three horses love to munch of grape vines so keeping them moving forward and not actively eating literally every step of the way was relatively challenging.  You either get really used to taking charge of a horse, or really stuck with a horse that refuses to move. Gigi and I only had two run ins with the vines solved not at all with my ability to control a horse but rather because she got a vine stuck in her bit and was busy working it out the entire way to our first official stop. 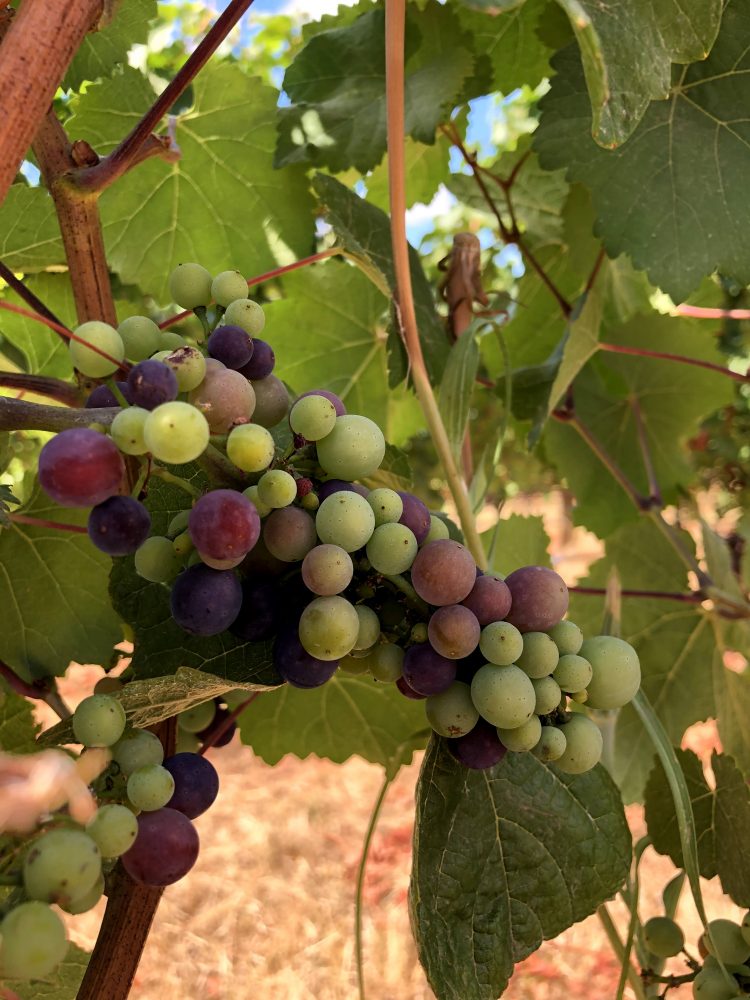 Our first tasting was  White Rose Estate which is one of the prettiest tasting rooms I have been to in the area, which is saying something given I lived in the area for close to 20 years and visited quite a few. Before we even got to sit down a woman who had way too much to drink given it was 11am came stumbling out of the tasting room declaring we were the most beautiful women she had ever seen and insisted on taking several pictures of us. Most of them turned out blurry. I would share them because they are pretty funny but I don’t share personal details of my friends and family here to protect their privacy. 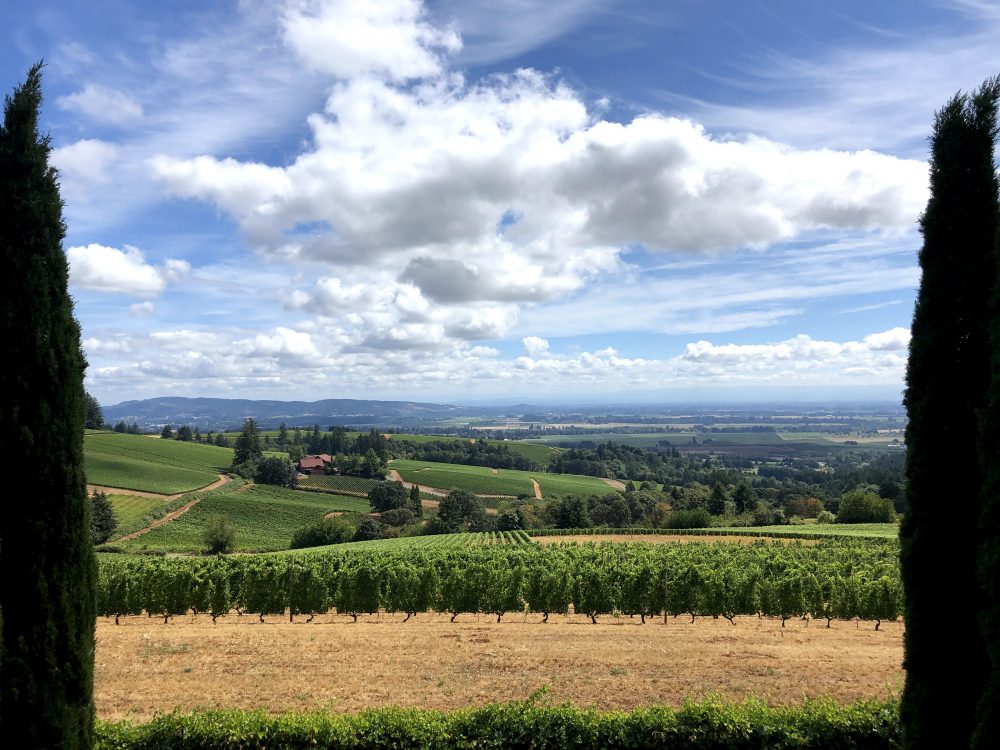 After that adventure we got to sit outside enjoying the view, chatting with our server and sipping some really excellent Pinot Noirs.  After drinking more wine that I probably should have for being so new to horseback, and having difficulties getting back on my horse even with Amber’s help (not because of the wine but because  my legs were already fatigued from riding) we were off to our second stop which was Francis Coppola’s Domaine de Broglie. Yes I do mean Francis Ford Coppola of  Hollywood, I will touch more on this vineyard in future posts. I did not end up drinking at this vineyard but we did have a really nice cheese plate and a gorgeous view after a good amount of time we saddled up and headed back to Winters Hill Estate. I have been to this tasting room several times and really love it for its homey feel and nestled in views of the valley. After wrapping up there we still had some extra time since we couldn’t taste at Winter’s Hill so we got an extended horseback tour of the vineyards, looping around the properties the long way and getting to see more of the valley views.

I would whole heartily endorse this trip regardless of time of year or weather. Amber told us stories of people who have ridden in rain and were laughing the entire time. And I will most likely being booking again some time this year with some other family members as it was too fun an experience to not enjoy ever again. Even if you aren’t drinking the views are incredible, the tour so much fun and getting to experience a vineyard on horseback is truly magical. I 100% endorse horseback riding in Oregon’s wine country.