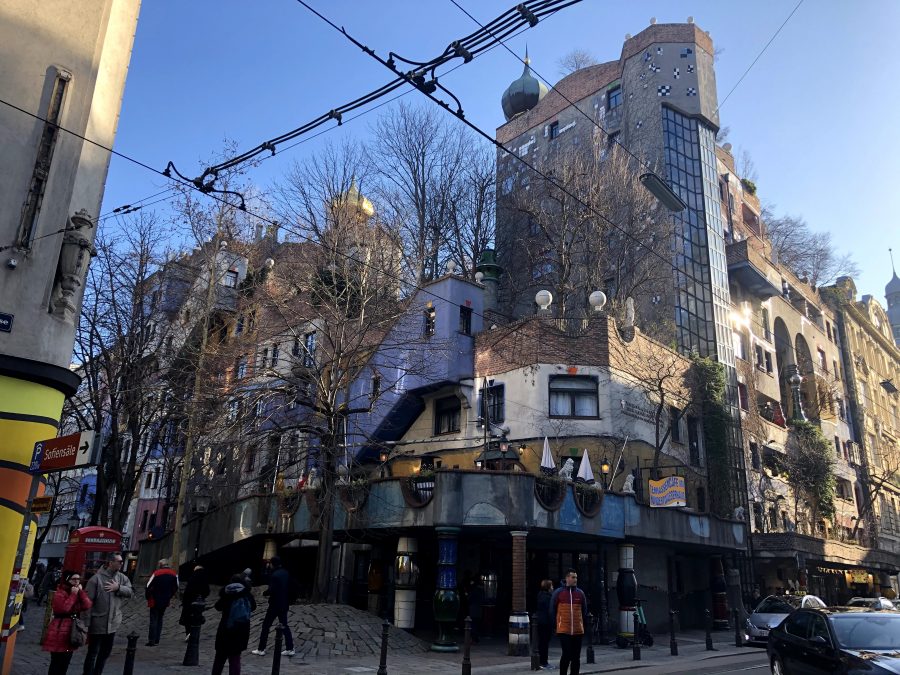 Hundertwasserhaus was not the most peculiar thing we did while in Austria over Christmas, as we were actually on the way to a cemetery where no one we ever knew was buried. But we were in the neighborhood and it because it is a little bit wacky it was of course on my list of must see things in Vienna.

Hundertwasserhaus today is a 53 apartment unit complex along with a few offices and communal space. It was convinced by Friedrich Stowasser an Austrian born artists who was passionate about environmental protection. Born in 1928 in Austria to a Catholic mother and  Jewish father, he chose to be baptized and joined the Hitler Youth to avoid suspicion as a young man. He joined the Academy of Fine Arts in Vienna, who famously rejected Hitler in his youth, at an early age and developed a very unique style which rejected modern conventions in art and architecture  such as the straight line. It was in school that he started signing his name Hundertwasser for reasons I have yet to dig up. 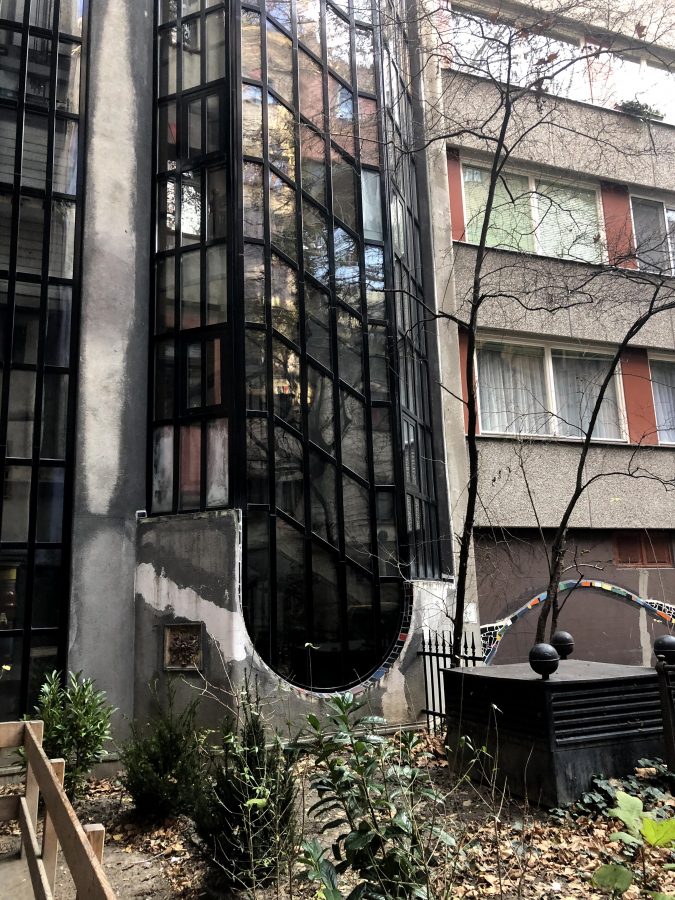 After achieving acclaim as an artist he turned to architecture and eventually designed quite a few buildings in both Austria and Germany. He also designed a public restroom is New Zealand where he spent quite a bit of his later life. An incineration plant in Japan. As well as a winery in Napa Valley California. Which now that I know this I am obviously dying to get down to California just to visit this one building.

Given Hundertwasser’s soft spot for nature, it should come as no suprise that he was a advocate in the 70’s for forested roofs and  large communal space with lots of plant life in an attempt to bring harmony between man and nature. His work brought him mto a man named Bruno Kreisky who was federal chancellor in Vienna during the 70s and through this connection he was given the opportunity to plan a housing project.  Josef Krawina was also assigned the project, whose intial plans allegedly shocked Hundertwasser for all their straight lines and exacting angles. After many different concepts and proofs the Hundertwasserhaus was built between the years of 1983 and 1985. 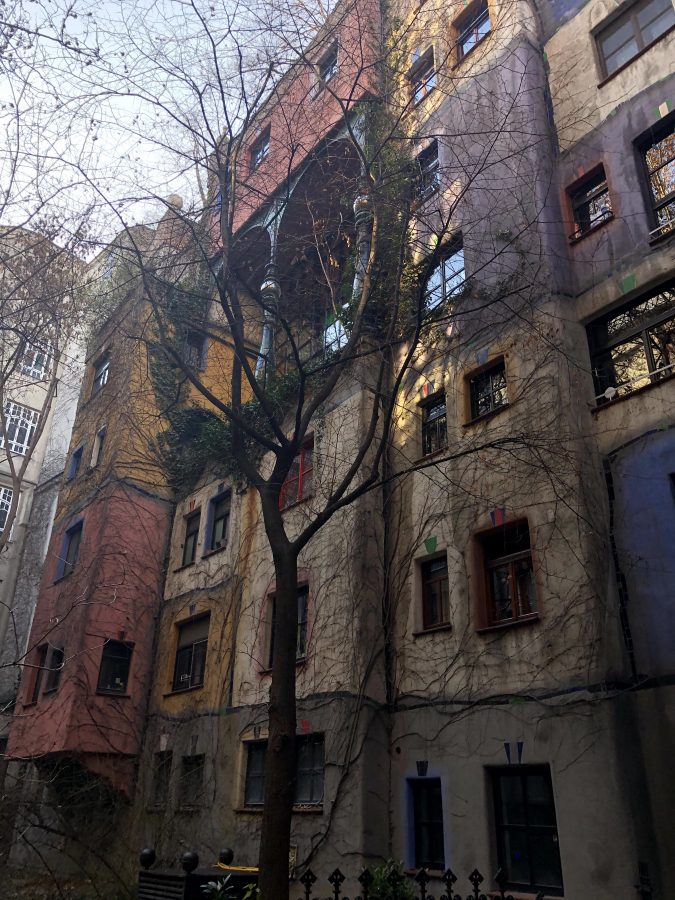 When complete Hundertwasser allegedly refused payment stating it was worth it to prevent something ugly having been built there instead. The final building being a resplendent building complete with a roof grass, huge trees and various plants throughout the court yards  (some of which grow into rooms) and floors that are anything but flat.

Visit Hundertwasserhaus is quite easy as it is just a couple blocks from a tram stop that departs from the Schwedenplatz underground stop in Innerstadt. A quick 10 min ride and a street crossing and you will find yourself staring at a building very outside the ordinary compared to all the baroque style apartment complexes of Vienna. After the general look about and picture taking we wandered into gallery and gift shop area across the courtyard from the main apartment building. As the apartments are private this is the only way to kindly experience the interiors of the building without harassing the locals. Please don’t harass the locals.  There are little shops to get souvenirs, coffee, snacks, paintings and even a public toilet. The whole plaza felt like it was built in 3/4 size and meanders around aimlessly almost giving the feeling of being inside an elaborate tree fort. 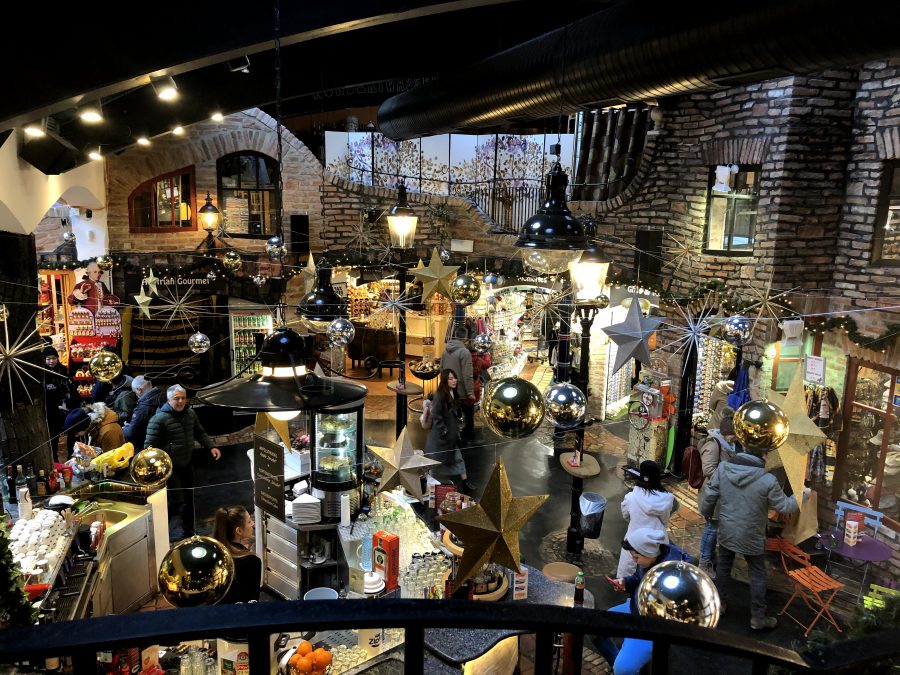 As we visited in December the courtyard wasn’t exactly showing off, however the area was just as packed as everywhere else in the city. If you are looking to take stellar pictures of the building I would suggest fall. But if you just want to visit an architectural masterpiece like nothing you have ever seen Hundertwasserhaus shouldn’t be missed. 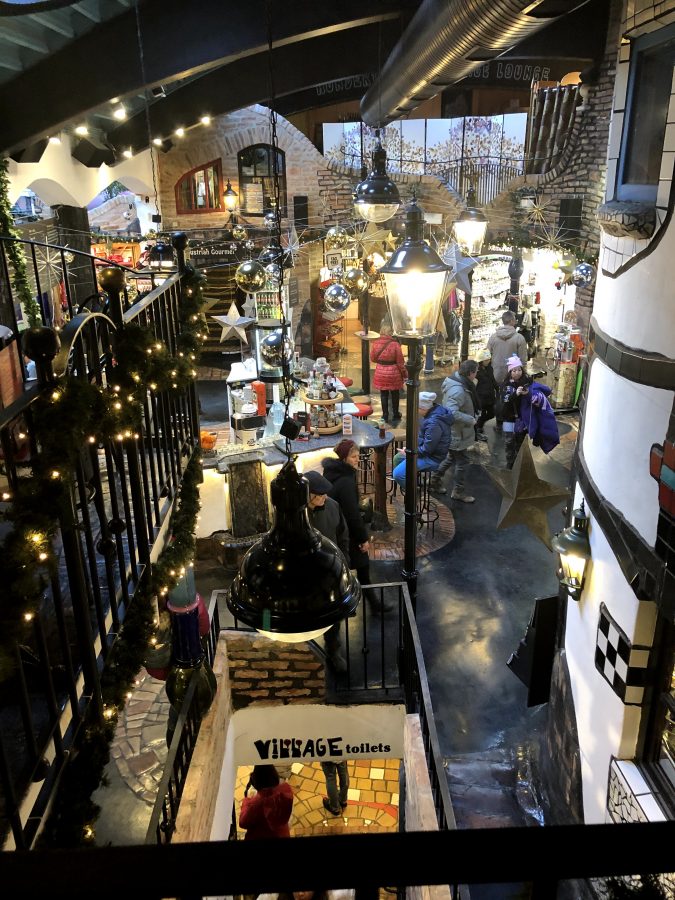