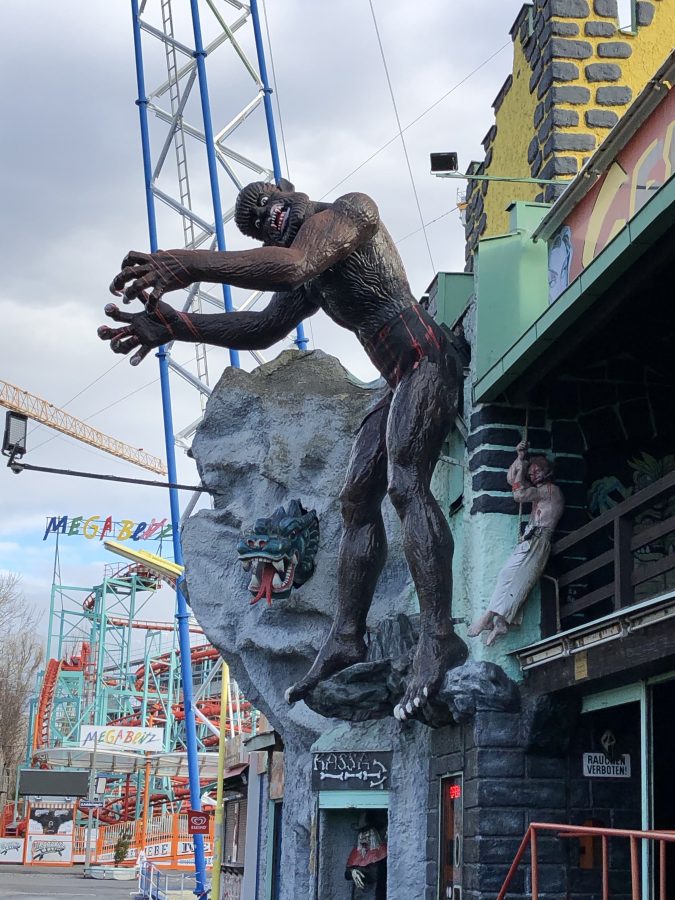 Prater Park, or more commonly just called Prater is an astonishingly large park in Vienna’s 2nd district. I looked up the exact size while writing up this post and said “holy sh*t” when the number 6 million square meters came up, to us Americans that would be almost 1500 acres, or 1500 football fields for you sports fans. Its a big park.

On Christmas day we actually visited two parks, we knew not much would be open. So after eating our pastries, drinking our coffee, opening our stockings (which we fill with local consumable treats and little souvenirs) we headed off first to visit the Flak Tower at the Waldspielplatz Augarten. There are actually quite a few Flak towers in Vienna, two a tad more hidden amongst buildings. And four others in two parks in the city. We chose to visit Augarten due to it location. The park itself is huge and absolutely stunning. It shares property with Porcelain Manufacturing facility, several resturants and recreational areas as well as two antiaircraft gun blockhouse towers, Flakturm VII towers L and G. The towers are traditionally use to hold large anti aircraft guns, you can see areas of both towers that took damage during the war. They are currently gated off, though its clear by the graffiti that people still get into them. I think some you can tour, though I honestly don’t know which.

After walking through one rather large park getting a load of pictures of the towers, lots of history buffs in the family. I marched us over to the Prater to take in an even larger park. It was a gorgeous day, sunny and almost warm so it was nice to be out and about.

The first mention of Prater was when Emperor Fredrich gave a large area of land to the Prato family in 1162. In 1560 the land was bought my Emperor Maximillian for hunting grounds. And in April 1766 Emperor Joseph opened the large plot of land to the public, at which time the Wurstelprater (amusement park) began to take shape. However the space continued to evolve over time. In 1873 a worlds fair was held on the land. In the 1920s hunting was banned from the public space and in 1937 the Rotunda from the worlds fair burnt down. In 2004 major renovations started on the park and in 2019 Eliud Kipchoge ran a marathon around the park which broke the world record for being the first time someone ran a marathon in under 2 hours. The 1482 arce park also houses a motor way, a national stadium a race track, multiple playgrounds, restaurants, and monuments. We obviously did not get to see all of this.

Rather we took a leisurely stroll through the amusement park, which was relatively empty, though quite a few families were enjoying their Christmas day outdoors in the sun. It is a little bit unsettling being in a large mostly empty amusement park, but it was really quite fun walking around the streets checking out the rides. Most were open but we chose not to ride any. My favorite was the haunted house. Wolfman with his teeny little swim shorts was cracking me up, most of the figures on the ride were animated and he was wiggling this arms to some not so spooky music.

After we left the park we wandered toward the river, we were in Vienna after all we had to see the Danube. Rather than walking through the park which would have been spectacular we chose to take a shorter route (we had already walked almost 5 miles).

We found an observation deck above a restaurant on the river and spent some time spying the goings on. Across the river is the newer part of the city which houses more of the business district and suburbs than the inner city side of the river. The weather was threatening to turn so we decided to turn back and hit the subway with our handy dandy week long tickets. We were back at St. Stephan’s in no time, grabbed currywurst from a small stand that happened to be opened and went back to the apartment to get some sleep before our 4am wakeup call to catch a train to Budapest the next day. All in all it was a really wonderful Christmas day and a great visit to Prater Park.