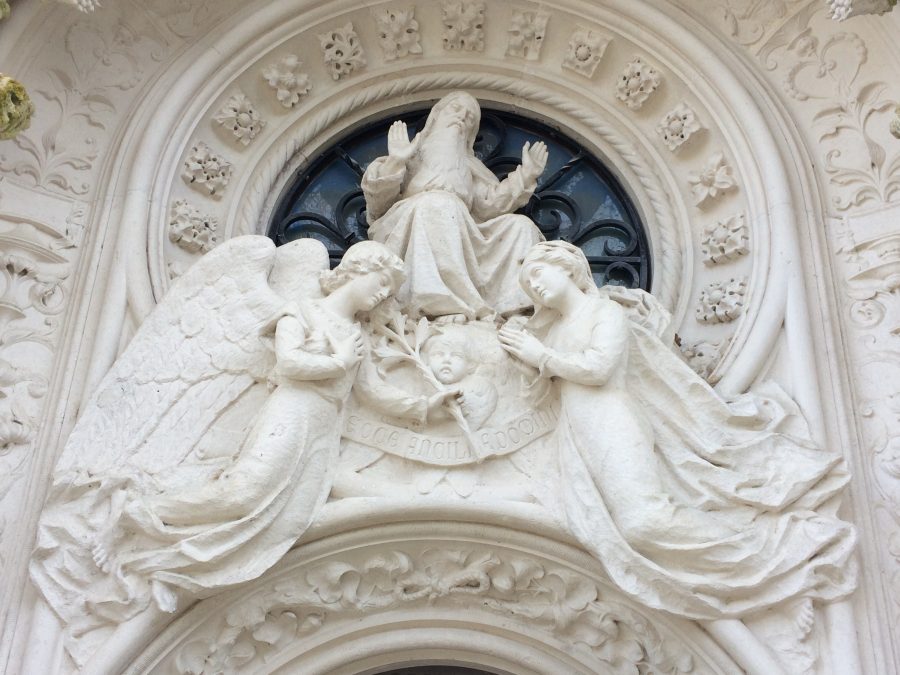 One of the main draws of Sintra is Quinta Da Regaleria a romantic style palace built in the 19th century. Though it does own quite a few gothic elements including a fair share of gargoyles affixed to the many towers on the house. 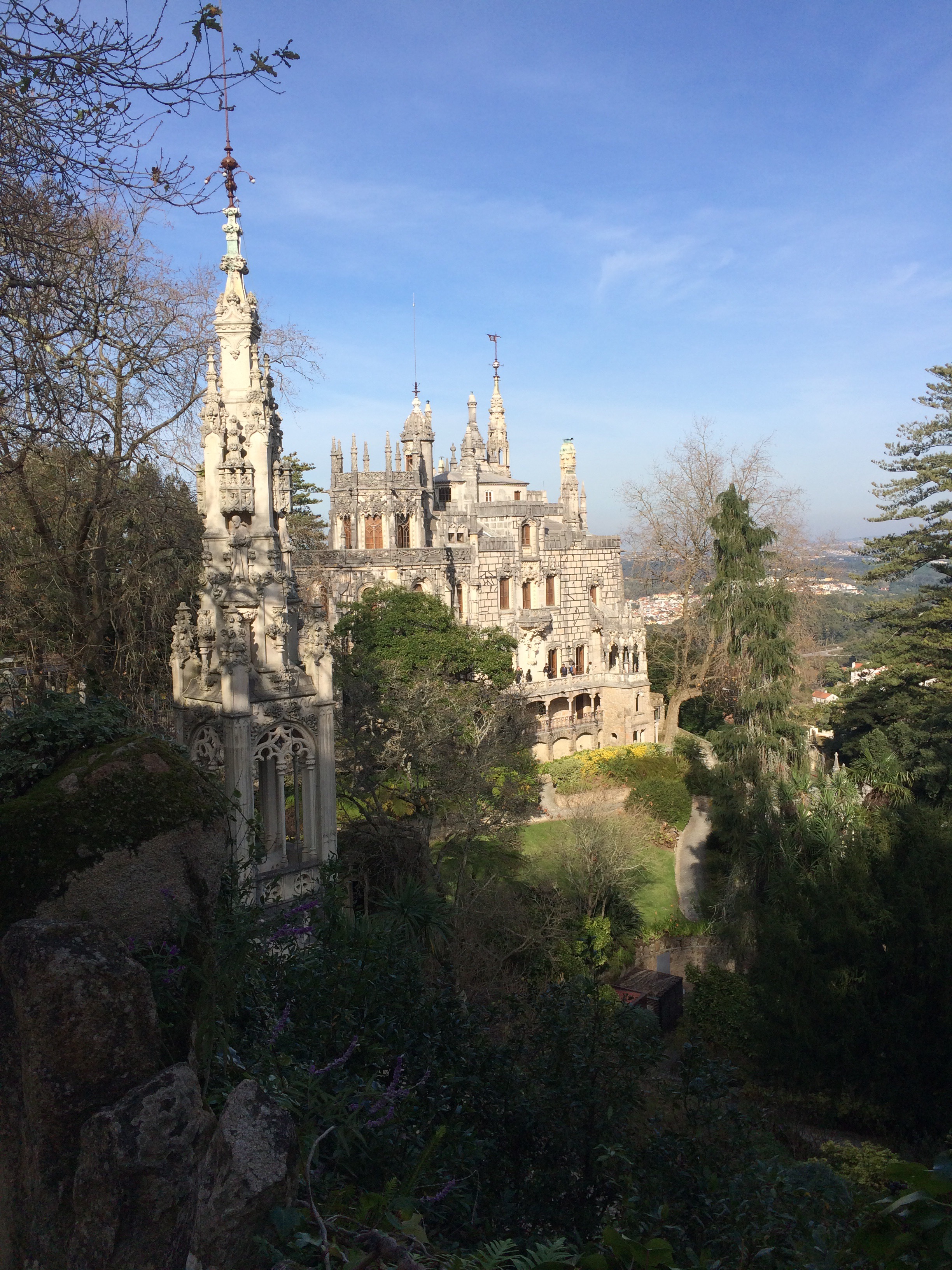 However, Quinta da Regaleria is not just the house, in fact while we were there the house was a very small portion of the self guided tour. The house was turned over the municipality only recently, restoration work and public viewings began in the late nineties. Most of that work has been done so far on restoring the gardens, tunnels, Initiation Wells and grottoes. 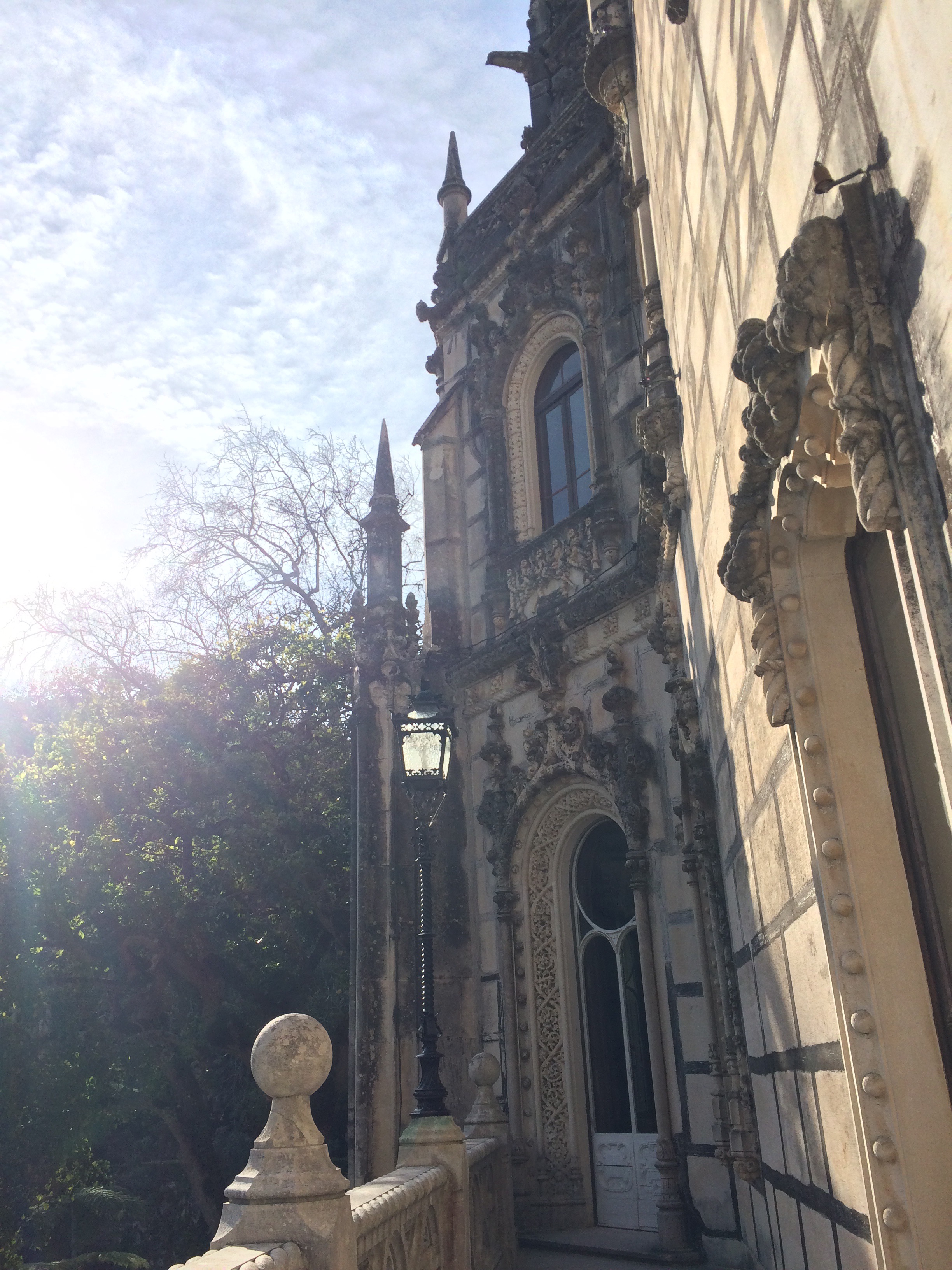 We didn’t know this going in and assumed that the house itself would take up quite a bit of time, however at the point of our visit it was only the first floor with a small display providing some history of the house. 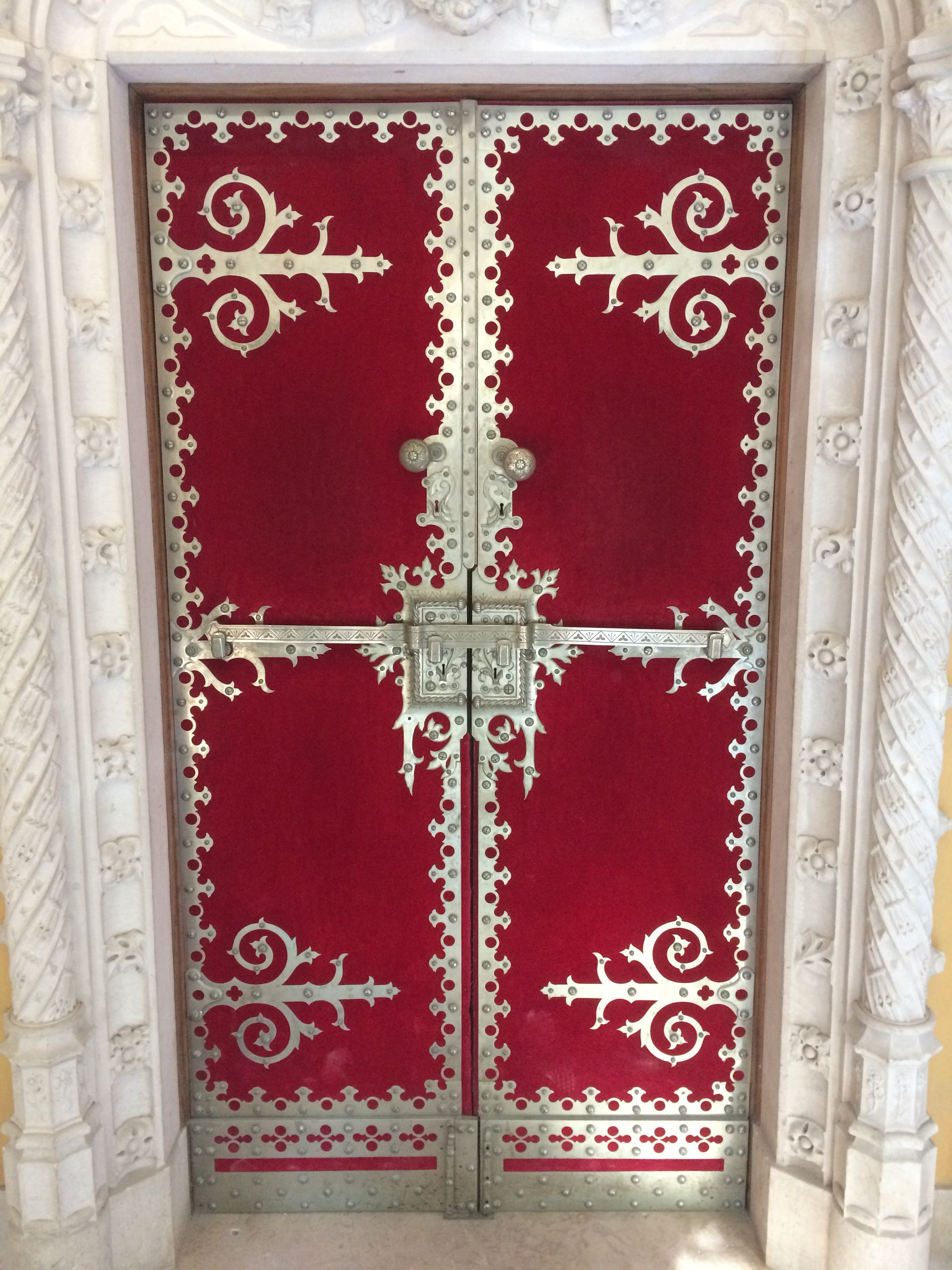 I loved touring the house all the same, they had velvet doors which I could not stop touching. It was a good thing there wasn’t a security guard close at hand I would have been in serious trouble. There was definite groping. 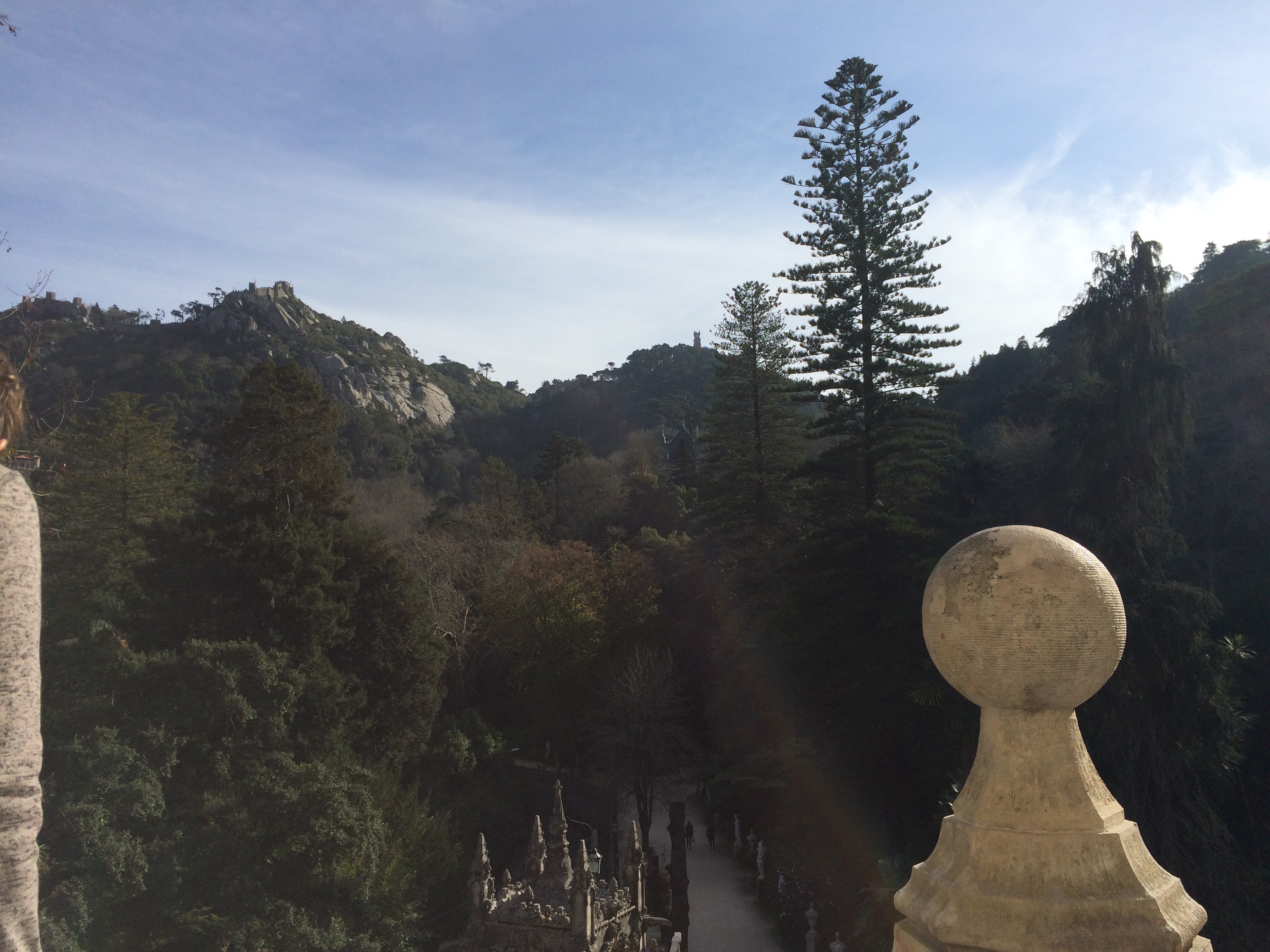 The views of and from the house were spectacular but I am not sure I could say otherwise for a single place we visited in Sintra. In the picture above you can see both the Castel of the Moors and the Pena Palace, which I took while standing on one of the many exterior walkways on the house.
However as I mentioned the real draw to the house is the grounds, which have been extensively restored. The ground had expanded over the years and as the property changed hands. One or more of the owners had an interest in ancient symbolism and as such you can see references to the Knights Templar, the Masons and dark alchemy littered through the many garden structures. 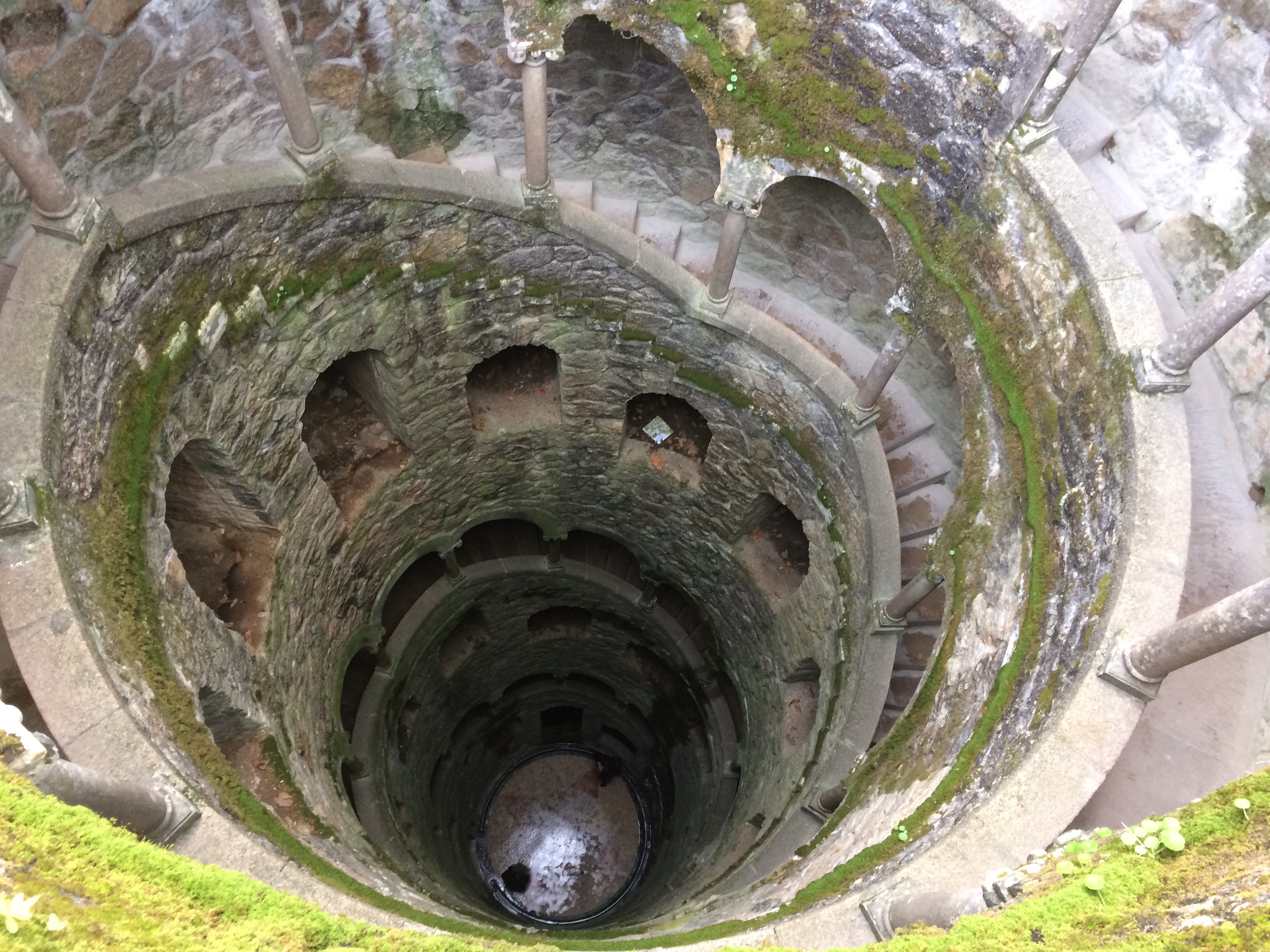 One such structure is the Initation Wells which were thought to be used in initiation ceremonies for either Masons or Knights Templar depending on the source. There are two wells on the property one is finished which are the pictures above and below. And then other is only partially finished though there are subterranean tunnels that connect the two. 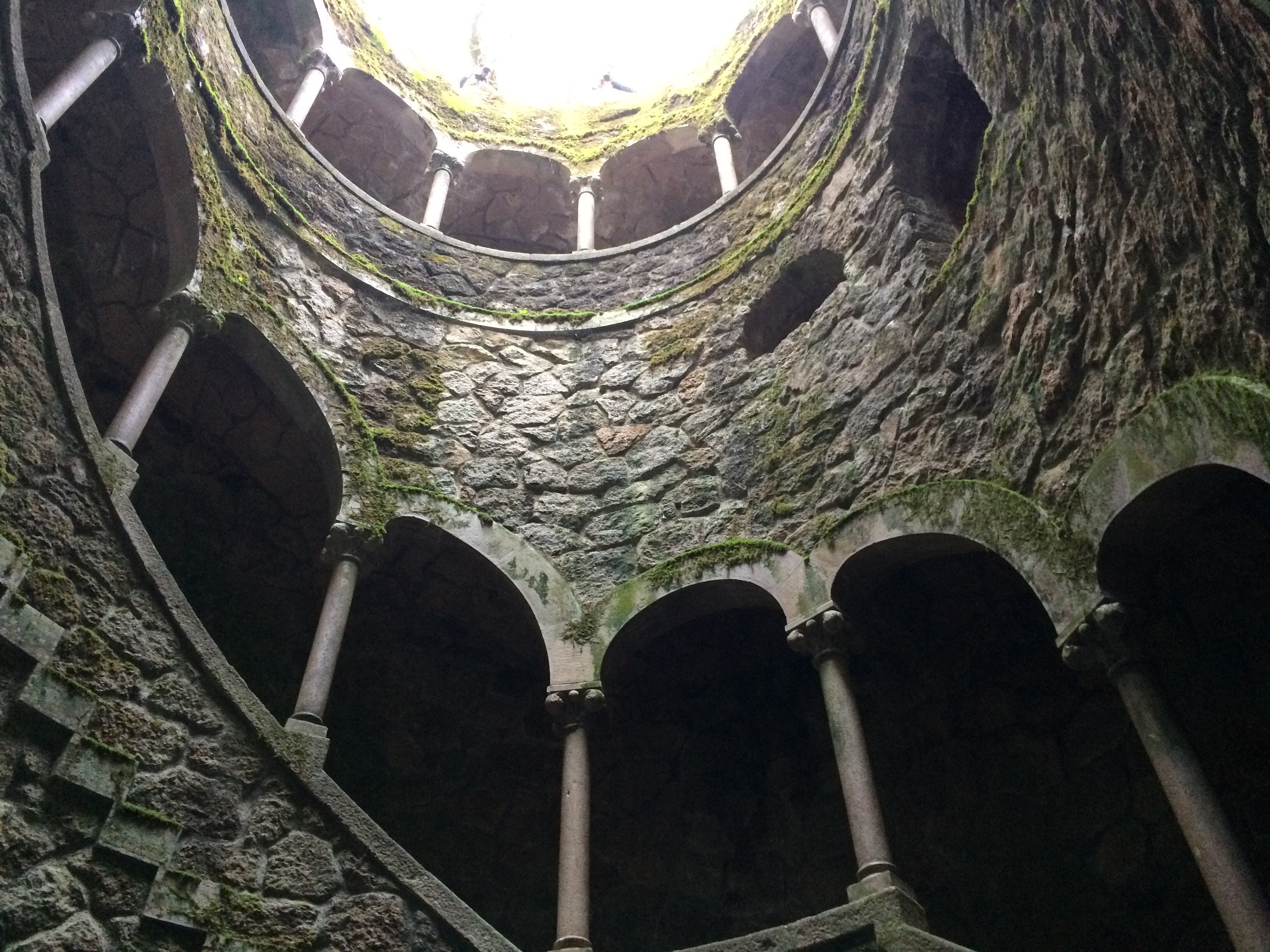 My favorite part of the property was the tunnels and the grotto. When you leave the main well and walk straight forward through the main tunnel you come out to this spectacular grotto with a small waterfall flowing over the opening. Please note to be careful in the tunnels, while the main one is average adult height that height does vary throughout the tunnel and the side tunnels can become quite low and mostly unlit.  My mom smacked her head on the side of one not realizing how low and narrow it was. I am pretty sure everyone in the tunnels heard it and she had a nice goose egg on her head for a couple days. 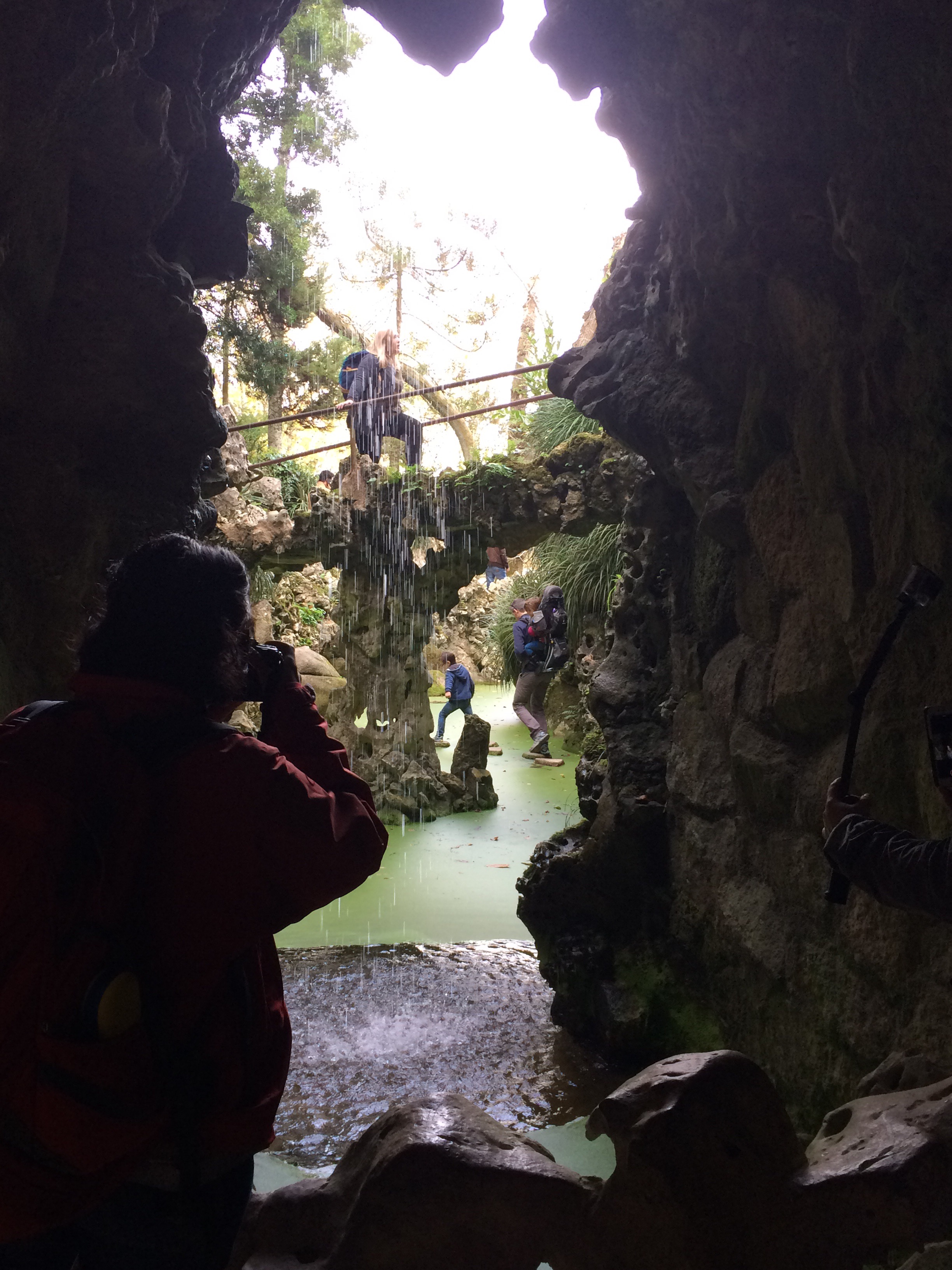 If you carry on to the left you come out to a small forum type area that over looks the house but if you go to the right you go through another small tunnel and come out on some stepping stones that go over the algae covered pond. From there you can cross the pond, and go up a couple steps to go over the small bridge that also crosses the pond. It was quite enchanting we wandered back several times during our visit. 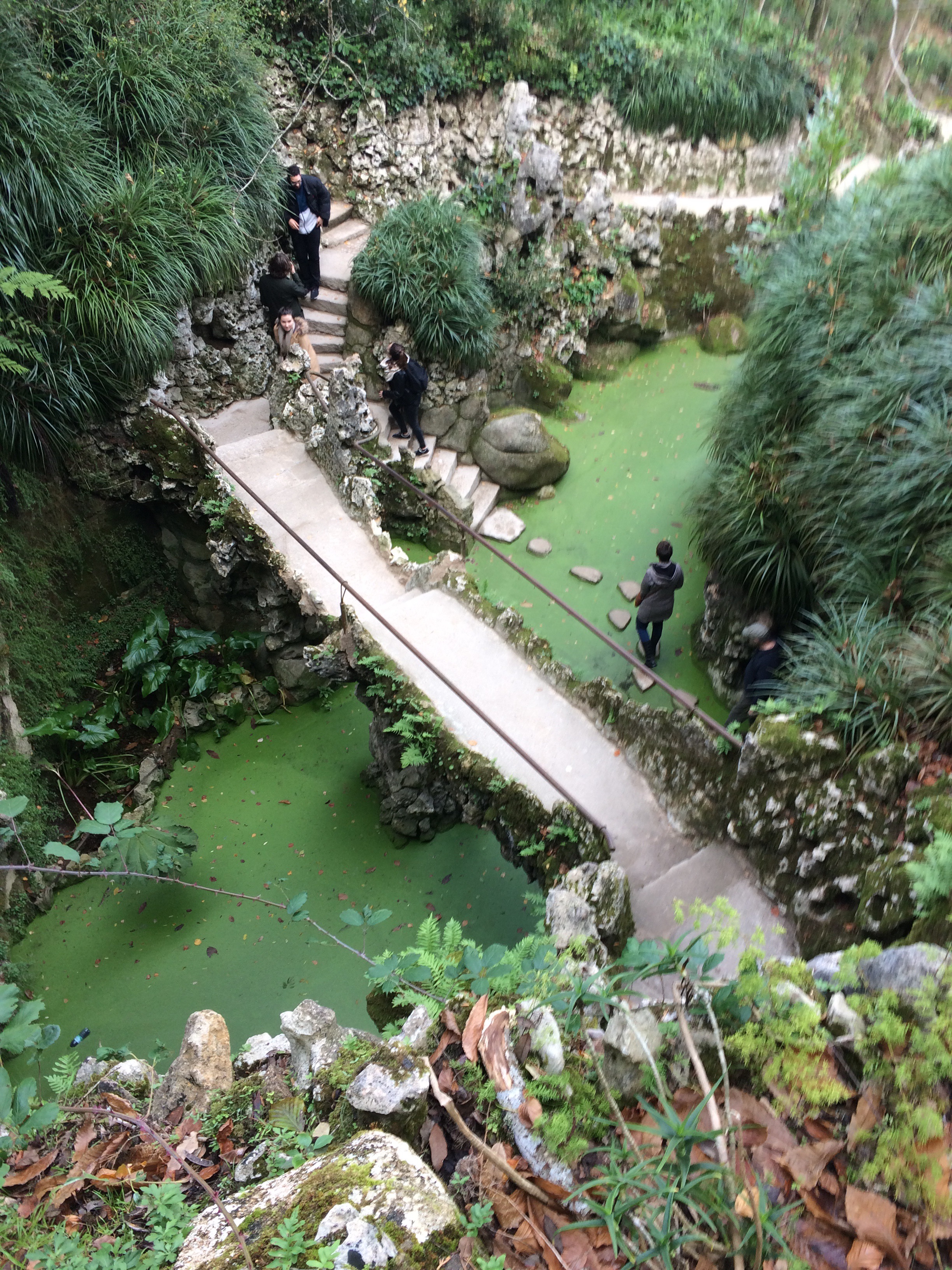 Other fun features of the property is the small chapel and greenhouse. The green house was closed when we were there but the building was lovely and I couldn’t help but snap a picture of the tiles on the exterior. 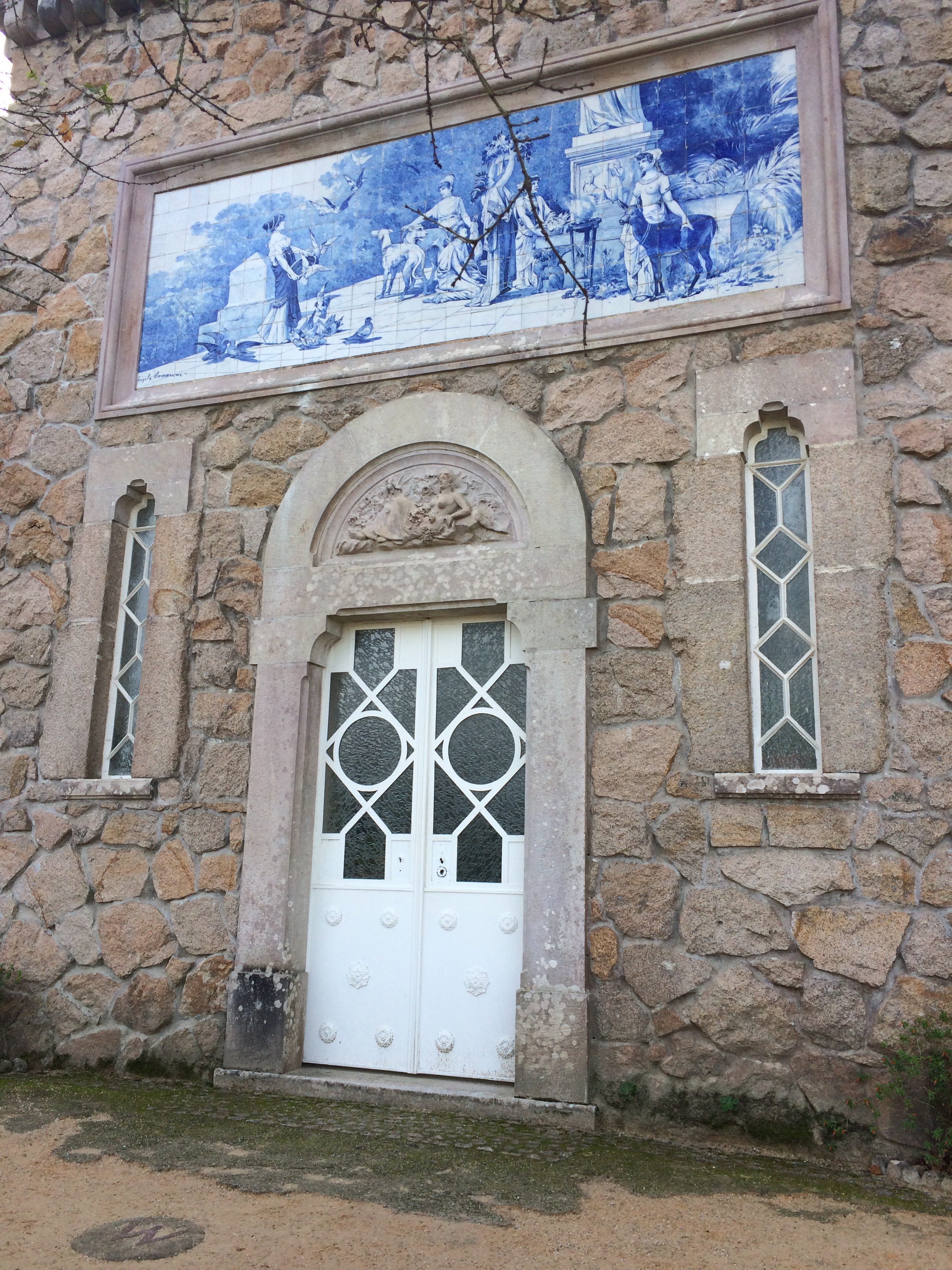 The chapel is extremely small, but incredibly ornate and surprisingly several stories including a basement level that also has a small tunnel that shoots you out close to the main house . 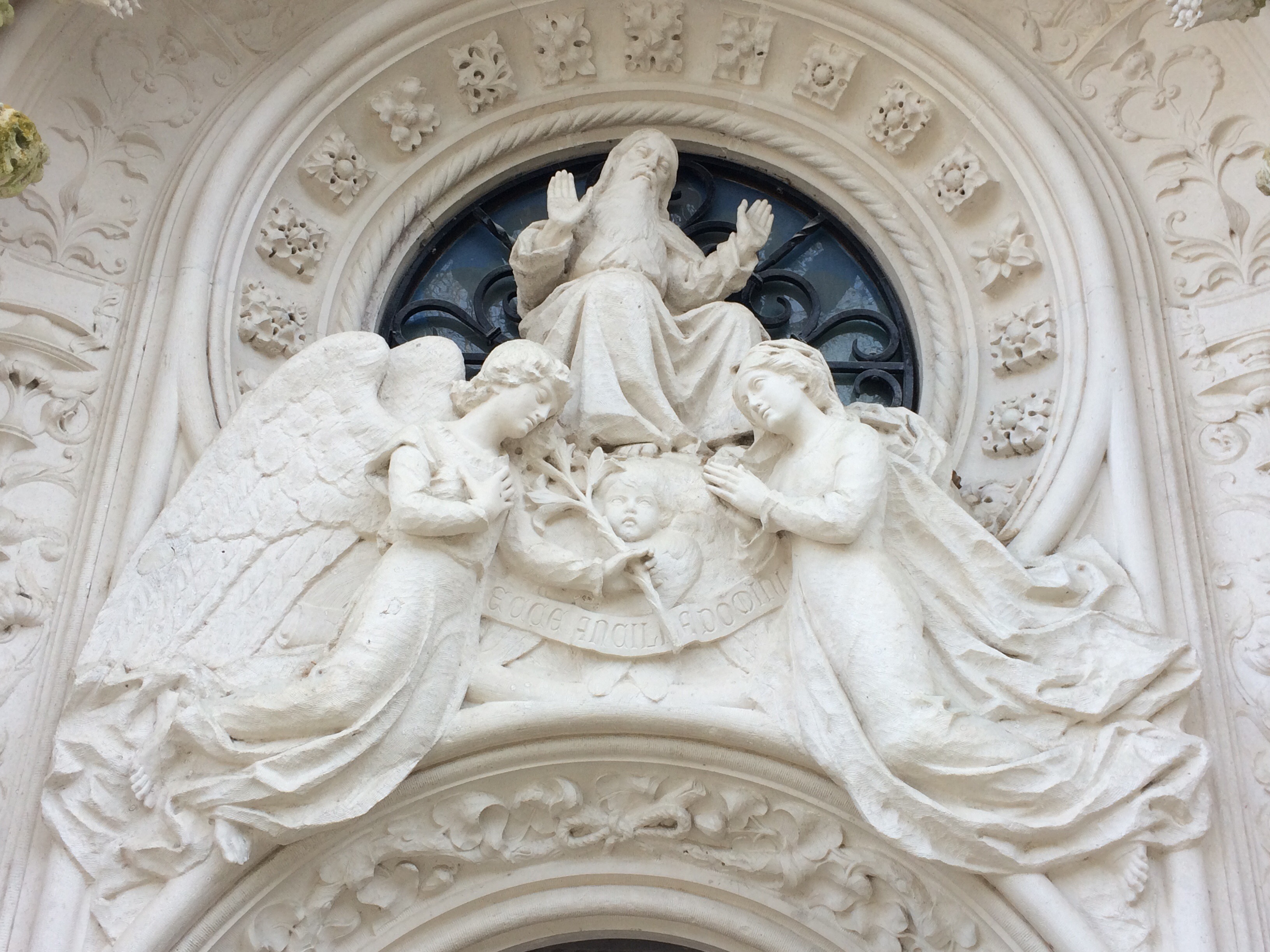 Before we left we had an afternoon snack at the café on the grounds. They had a pretty complete lunch menu, meat pies and pastries along with coffee and soda. I had a delicious chicken pie that I ate WAY too quickly and a cappuccino. We also shared some orange cake and soaked up the sun before heading off back to town.
To get to Quinta La Regaleria all you need is to be in Sintra and have a pair of legs. It is a very easy walk, though the side walk is narrow so take caution.  If you don’t feel safe walking or would rather take a more leisure way up there are Tuktuk rentals in the city center you can use. There didn’t seem to be a single place they are just meandering around and are all easily approachable and friendly.  My final note would be, when visiting illogically you walk past the main entrance up past the house and most of the ground to buy tickets and enter the property. This was confusing for us even though there were signs and volunteers helping steer us to the right entrance, it was especially confusing for non English or Portuguese speakers and cause some upset in a couple cases while we were there.