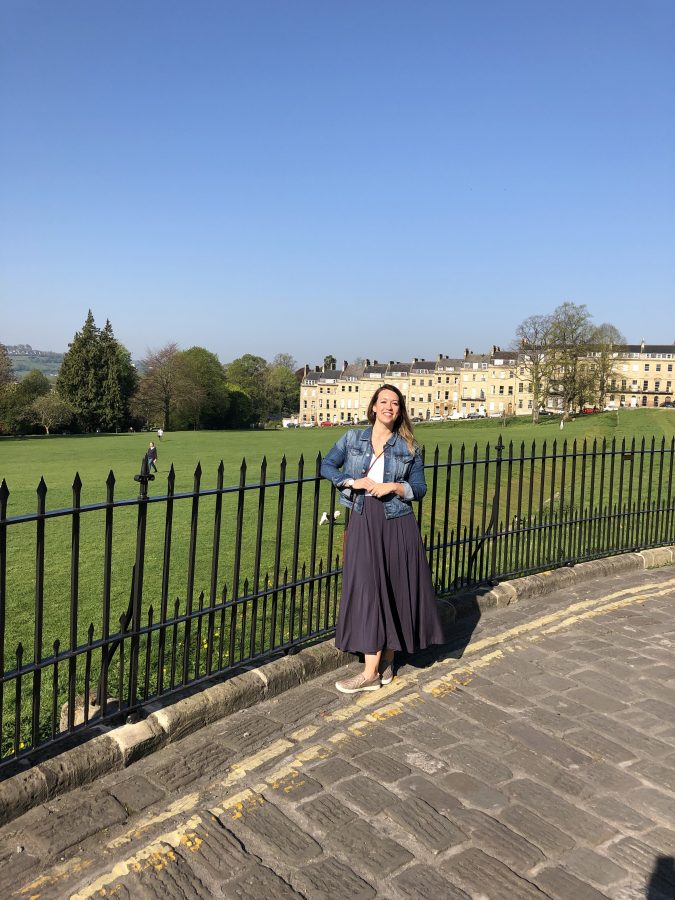 Bath is a town in Somerset England, settled in the valley of the Avon (one of several) at the foothills of the Cotswolds. It was known to early human’s for it’s naturally hot spring waters and was later developed by Roman’s in 60AD as a spa town.  The town continued to play an important role of the settlers near the area, having served as a religious center in the 7th century it continued to thrive and fall to despair only to be rebuilt again and again over the years.  The most recent rebuild was after the Bath Blitz during WWII and the city was finally was pronounced a UNESCO World Heritage site in 1997. 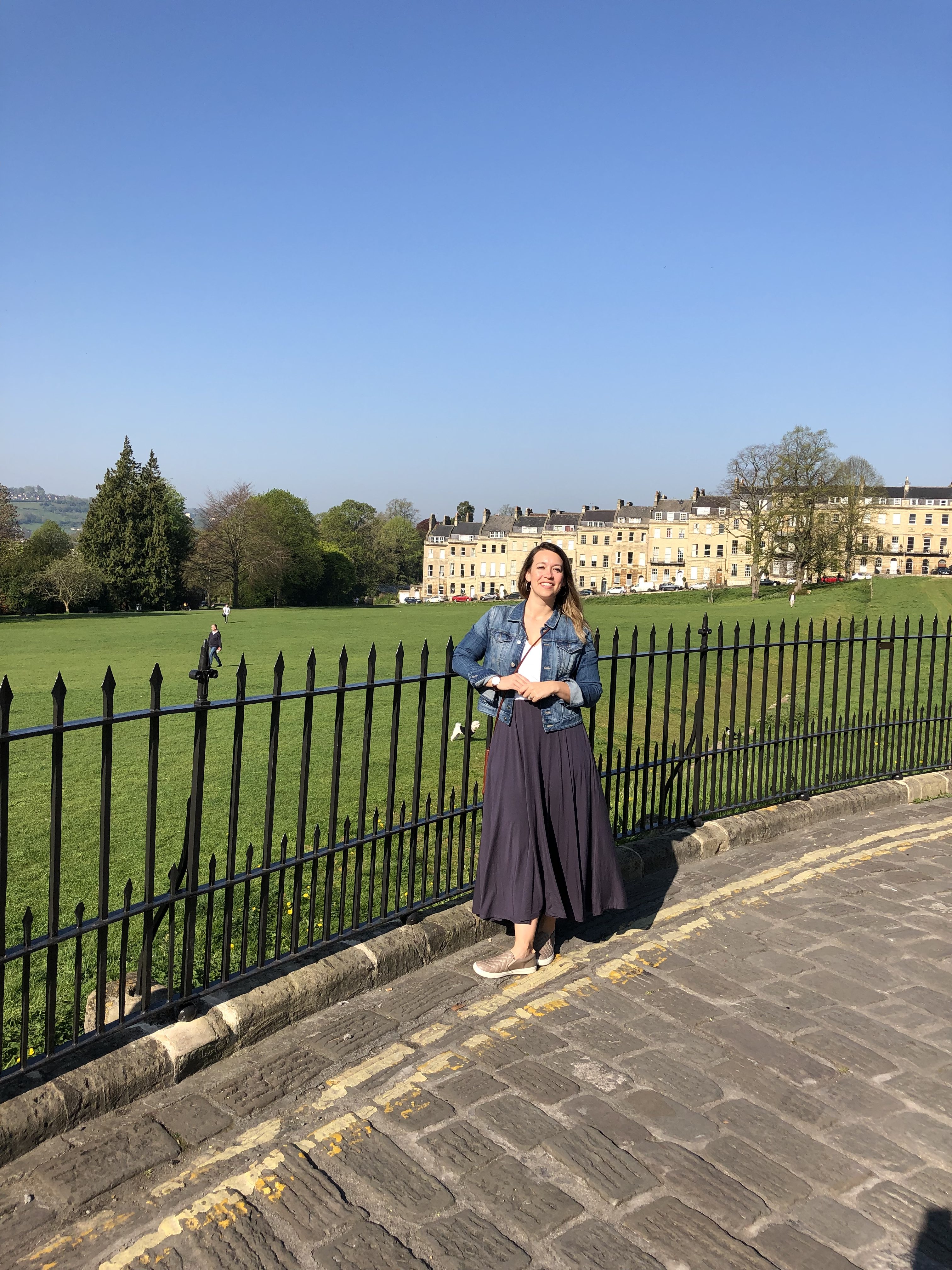 Perhaps the most well known residence was Jane Austen, though she never completed a book here, rather she drew inspiration from the town and the people that spent their time in the gorgeous city. Many films have been made here including: The Other Boleyn Girl, The Duchess and Vanity Fair. Obviously the surrounding lend itself to a more historic atmosphere, and usually highlighting the Royal Crescent a unique curved townhouse building overlooking extensive gardens of the Royal Victoria Park.

Things to See Near the Crescent

The Royal Crescent itself is quite the site. Built between 1767 and 1775, people looking to invest in the building would buy a length of the facade and then employ their own architect the build the rest of their portion of the house. It remains today a townhouse, as it was always intended to be. At the eastern end of the house however is No.1 Royal Crescent, a historic house and museum open to the public. We were short on time and didn’t get a chance to go through it, but if you are interested in the house I would say it would be a great place to stop in.
The Royal Victoria Park is 57 acres and boasts a botanical garden, bowling greens, duck pond, tennis and skateboarding areas as well as a cafe among other attractions. It was dedicated in 1830 by Queen Victoria but rumor has it she was insulted by a local resident and never returned. However there is a obelisk in the park commemorating her.
This side of Bath is also home to the Circus another set of circular Georgian style townhouses, but rather than the large half moon shape of the Royal Crescent this set is four smaller sets that make up a full circle with a road in the middle. The area is also home to the Museum of East Asian Art. 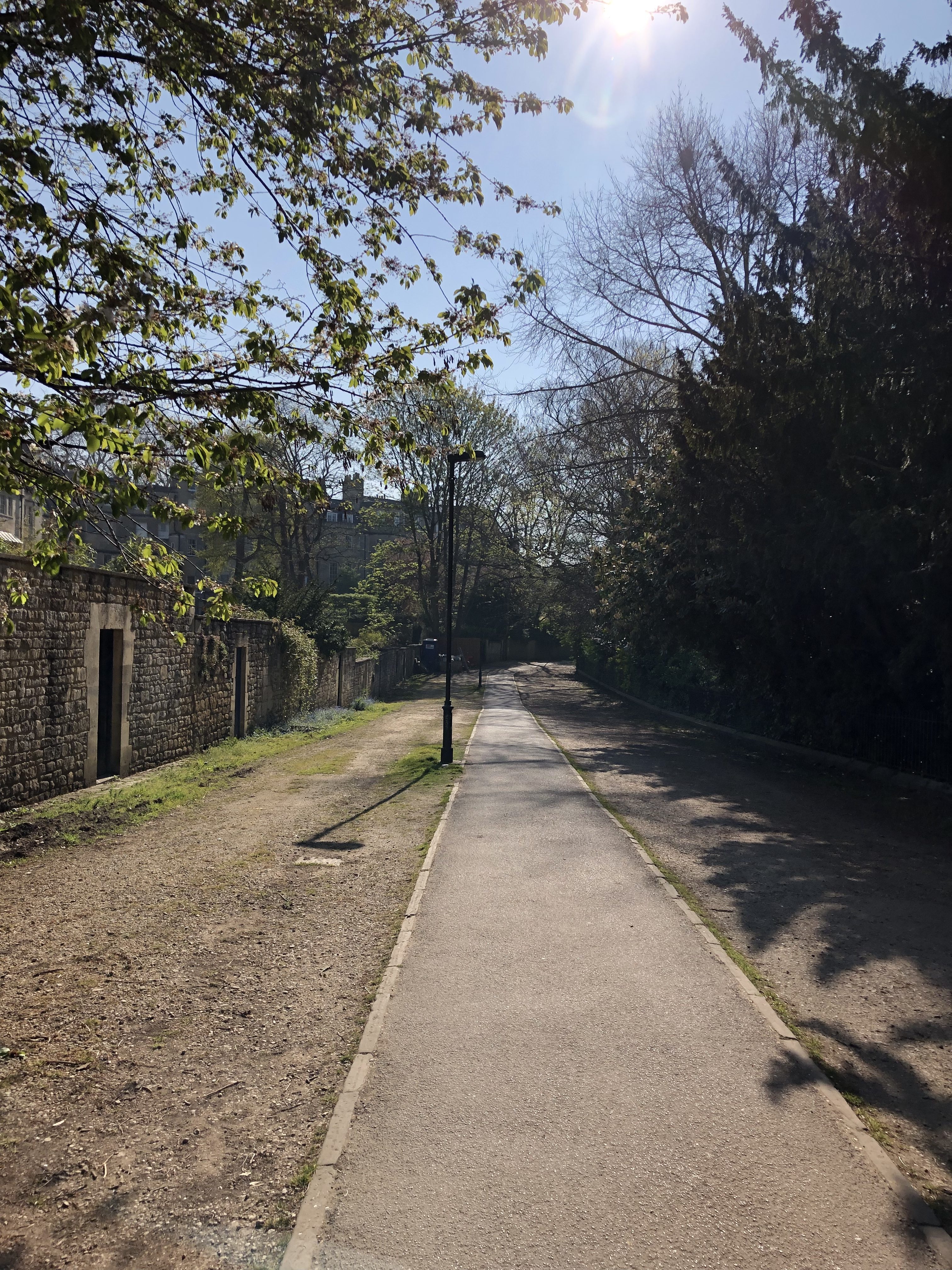 Big popular sites are all well and good but I like to find the hidden gems of every place I visit. One such places is a small restored Georgian Garden located on the Eastern edge of the Royal Victoria Park. Directions indicate you are looking for a small footpath in the garden. So that is what we were searching for. It took us about 20 min to find it, we had walked past the painfully obvious walkway multiple times. If you walk to the eastern edge of the crescent and turn right, you will see before you enter the Royal Victoria Park a small footpath on the left which takes you along the backs of some houses. The maps for what ever reason seem to indicate that it is both in the garden and some sort of small gravel hard to find walkway. It is not, it is large, wide and most certainly paved.
Part way down the not at all gravel walkway on the left you will find a garden gate that is open to the public. This is the Georgian Garden. This small garden was restored after the own of the building was repairing part of the house and accidentally unearthed the original garden walls from the 1700s. Several restoration groups jumped into action to restore the garden to it’s original plans and it is now open from 9-7. It is a quick stop as it is a small garden but to garden lovers I think it will be well worth the detour.
After leaving the garden continue down the footpath to the left. This will open up to the street with the larger garden’s main gates which as guarded by bronze lions just to the right. Just outside the main gates is the Bath War Memorial that commemorates the lives of Bath residence lost in several different conflicts. 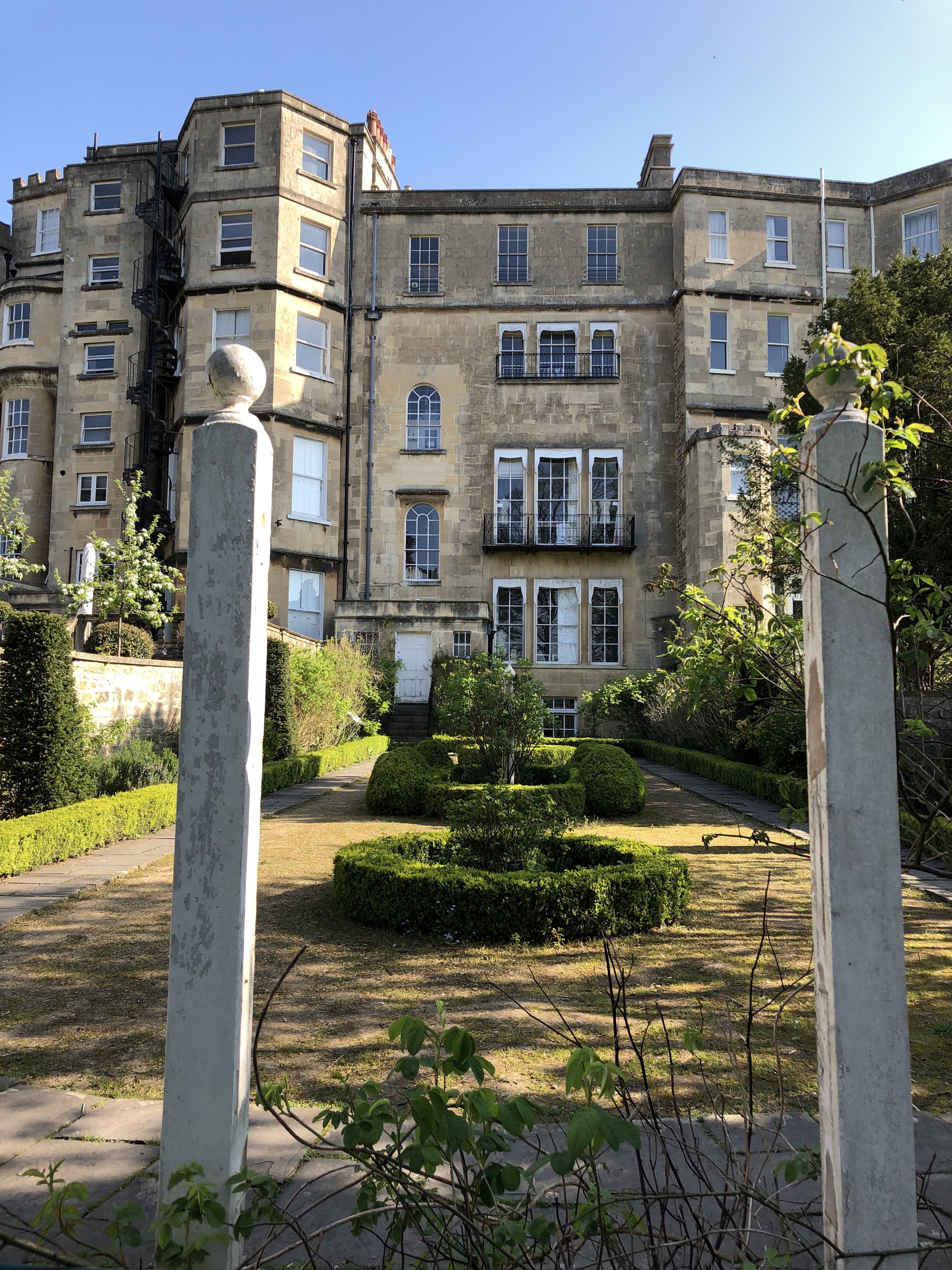 Places to Stay Near the Crescent

There are loads of places to stay near the Royal Crescent. But I can personally attest to the service provided by Bath Holiday Rentals. I found them on a booking site, and I wish I would have just booked with them directly. The cost is lower and the individuals working with the company are incredibly helpful and kind. There is an apartment managed by them that is on the block of townhouses in the Royal Crescent itself.  As well as a number of others within just a few blocks. We stayed a few blocks from the area in the River Street Mews location and loved our stay. 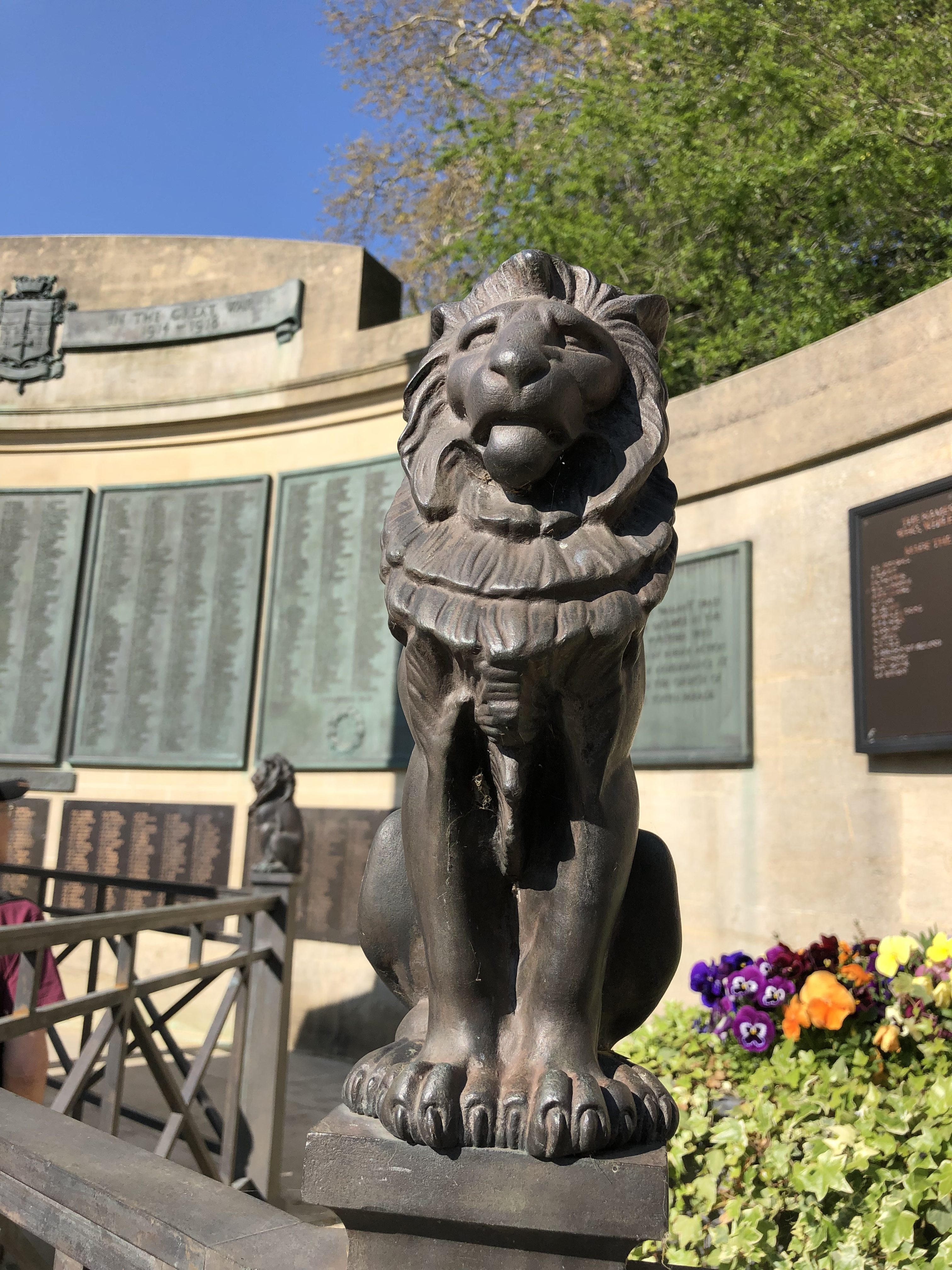