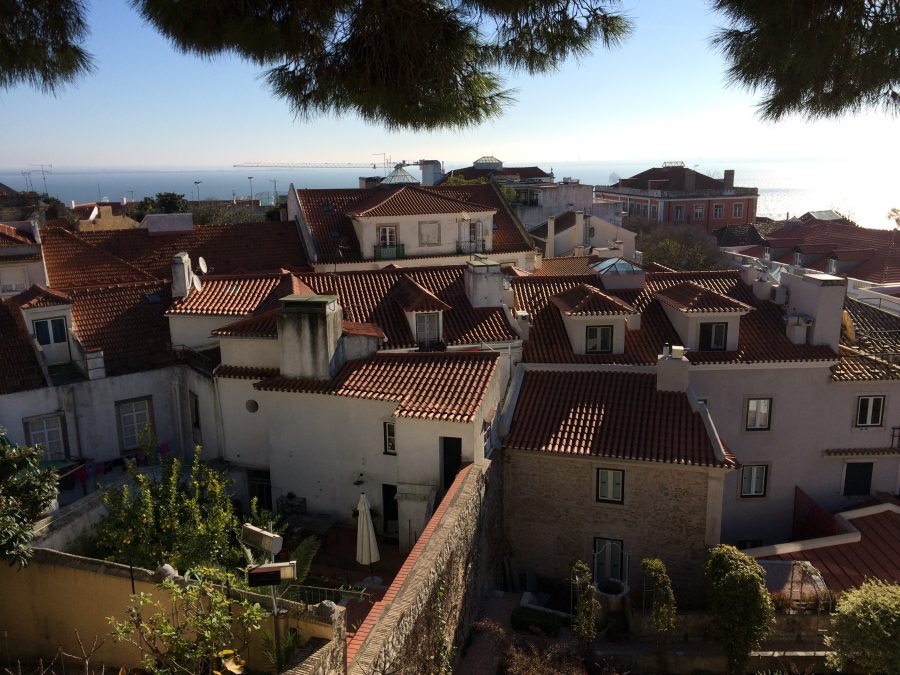 The São Jorge Castle is a Moorish Castle that dates back to the 2nd century BC, though ongoing archeological digs has reveled that human occupation of the site started long before the existing castle was built. The castle and the surrounding neighborhood of Alfama was relatively unscathed by the 1755 earthquake that flattened the city and killed over 100 thousand residents. The earthquake did however damage the castle to a certain degree leaving only the walls of the old structure. 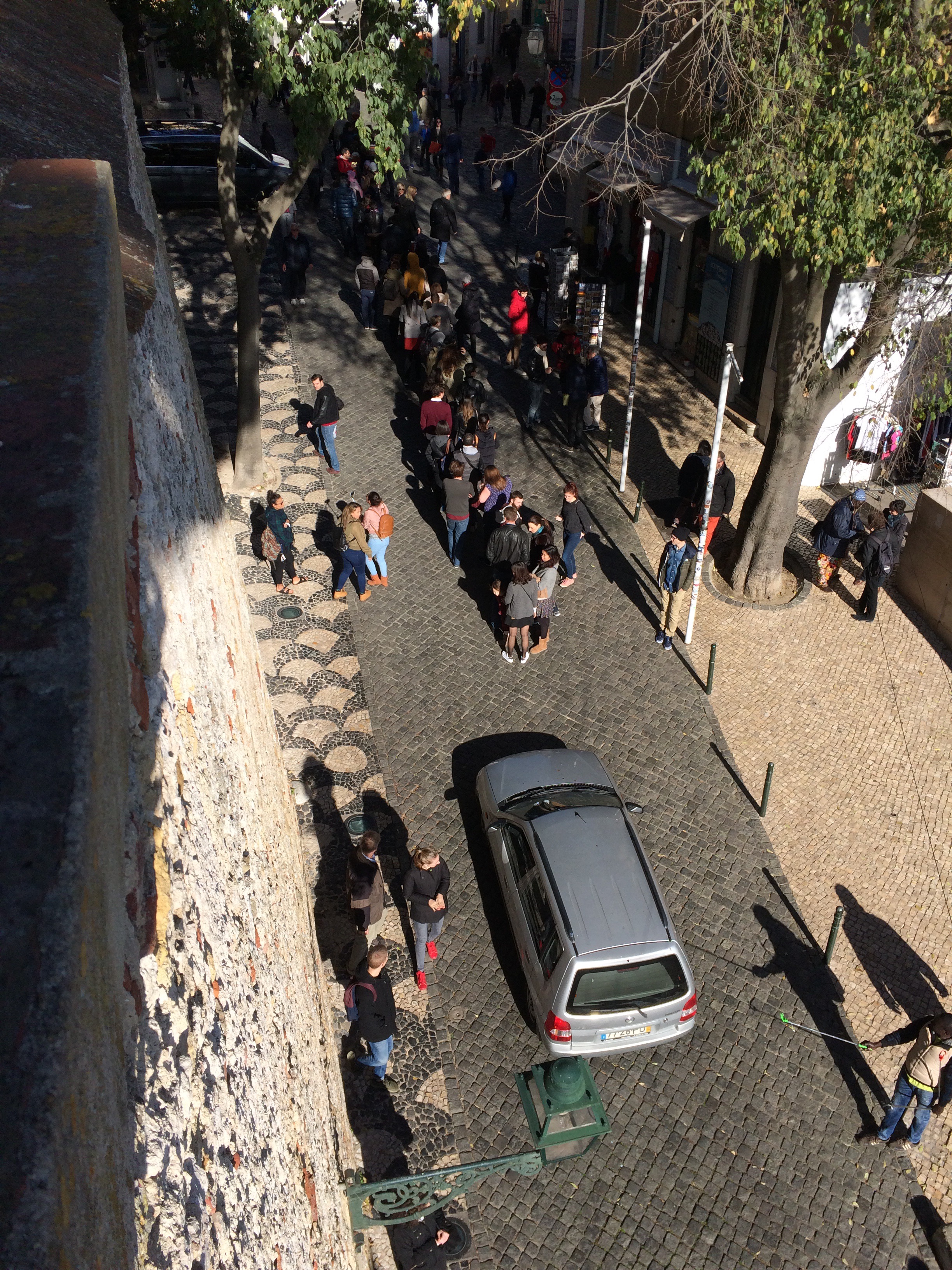 It is one of the more popular sties in Lisbon. Due to it’s closeness to the docking point for tour ships as well as it being one of the only sites open on Monday’s it was quite crowded when we toured. We were lucky enough to get to the ticket office, which is just outside the main gate, right at opening and got in before a line formed. But we did end up leaving a little early because the crowds were unmanageable (see picture above for the end of line to get in). I would suggest going early and not on a Monday when other sites are open which may alleviate the crowdedness. 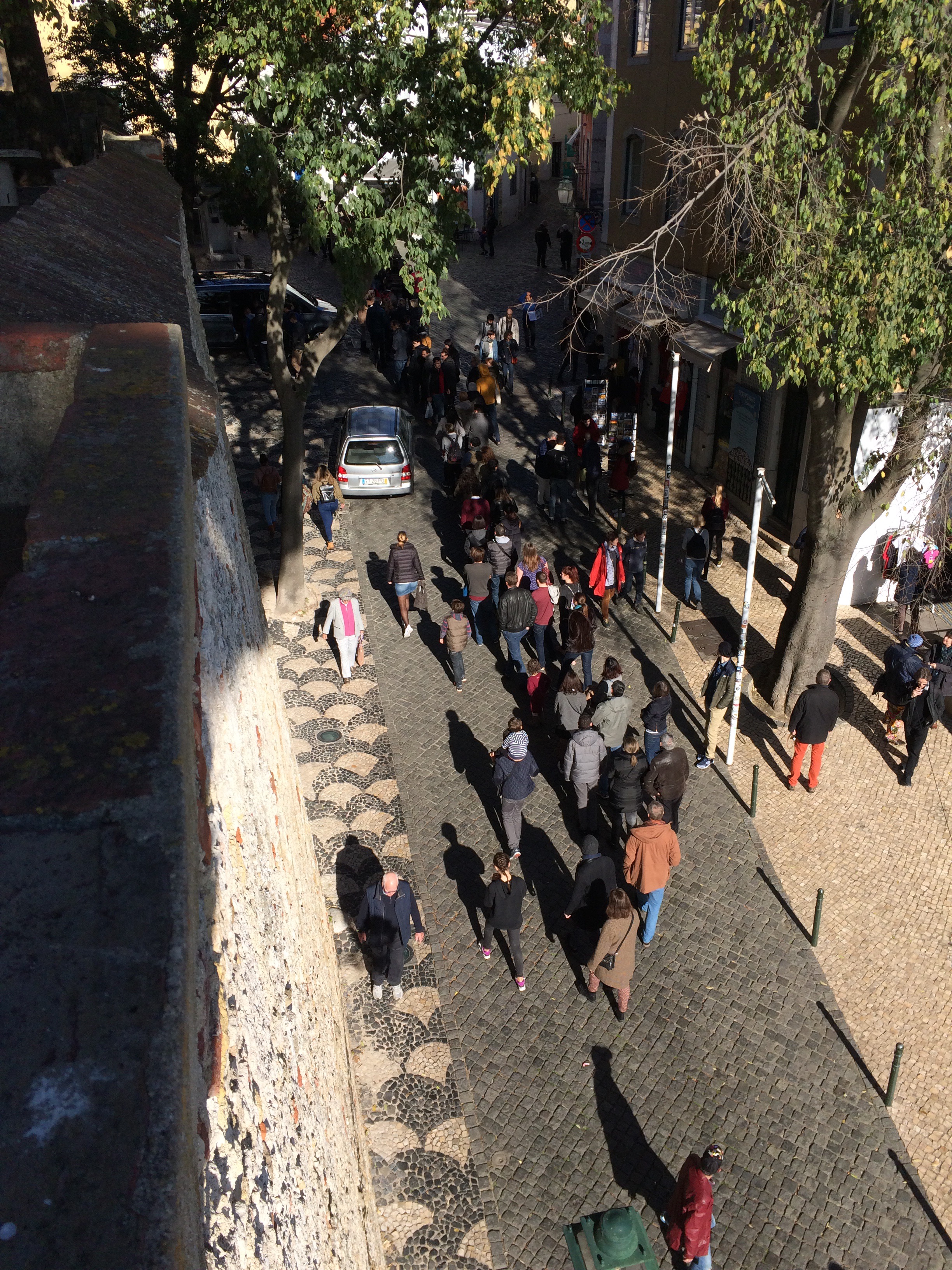 I may have enjoyed watching cars try to pass through the crowds waiting to get into the castle a little too much. One of my favorite things about Europe is the abject not giving an F. Don’t get me wrong, I love Europe and the kindness of everyone I have met. But in the states everything has to be carefully controlled. This type of thing would NEVER happen back home, there would be safety rails and specific places for people to queue up. You would never be allowed to walk and drive in the same place. I love seeing people have the freedom to make their own decisions and look out for their own safety rather than constantly being babysat. Social rant over, back to castles! 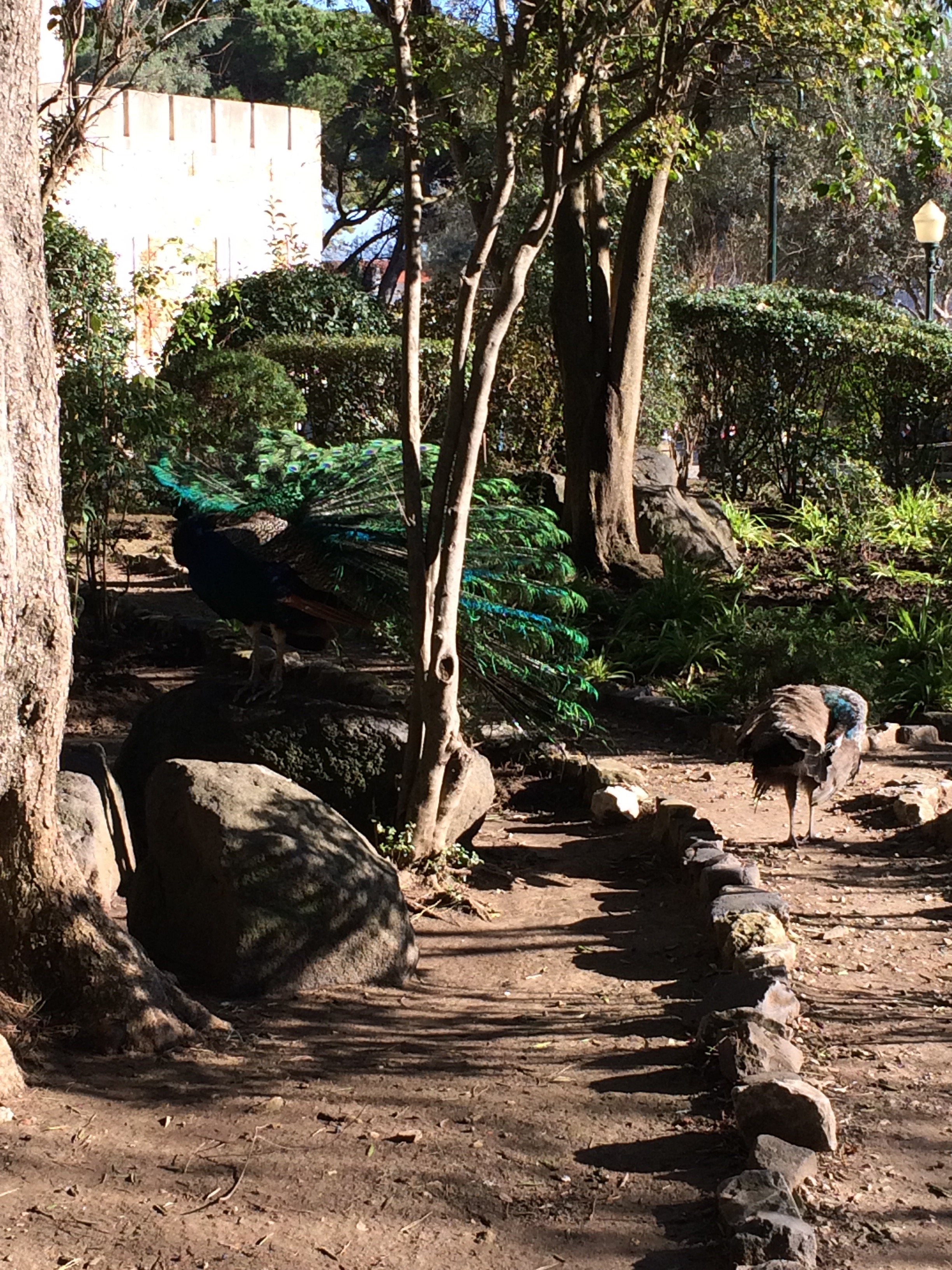 There were about 7 peacocks and peahens roaming around the gardens and grounds. Naturally they were a big attraction to tourists. I was happily taking a picture of one and then looked up and realized there was one in a tree looking down on me. That ended the picture taking for me quickly. They are very pretty but a tad big to be comfortably standing over me. 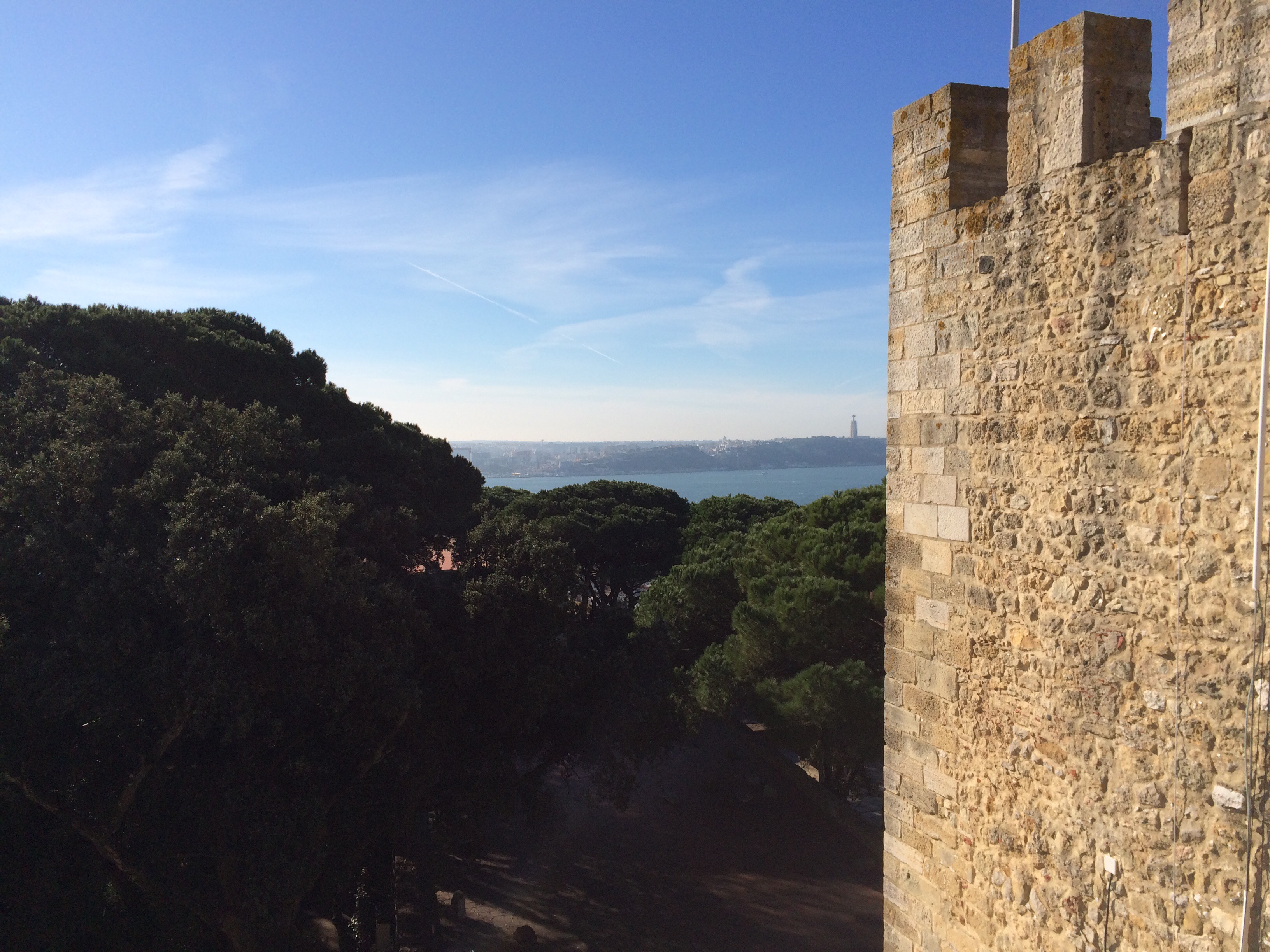 Once done wandering around the grounds you can enter the castle and make your way up and around the castle walls. The views were amazing, though the passage ways and stairs narrow and with all the other tourists it got to be a bit much for us. So we wandered back to the court yard, got a coffee (espresso) and sat in the sun and enjoyed the views for a  while. 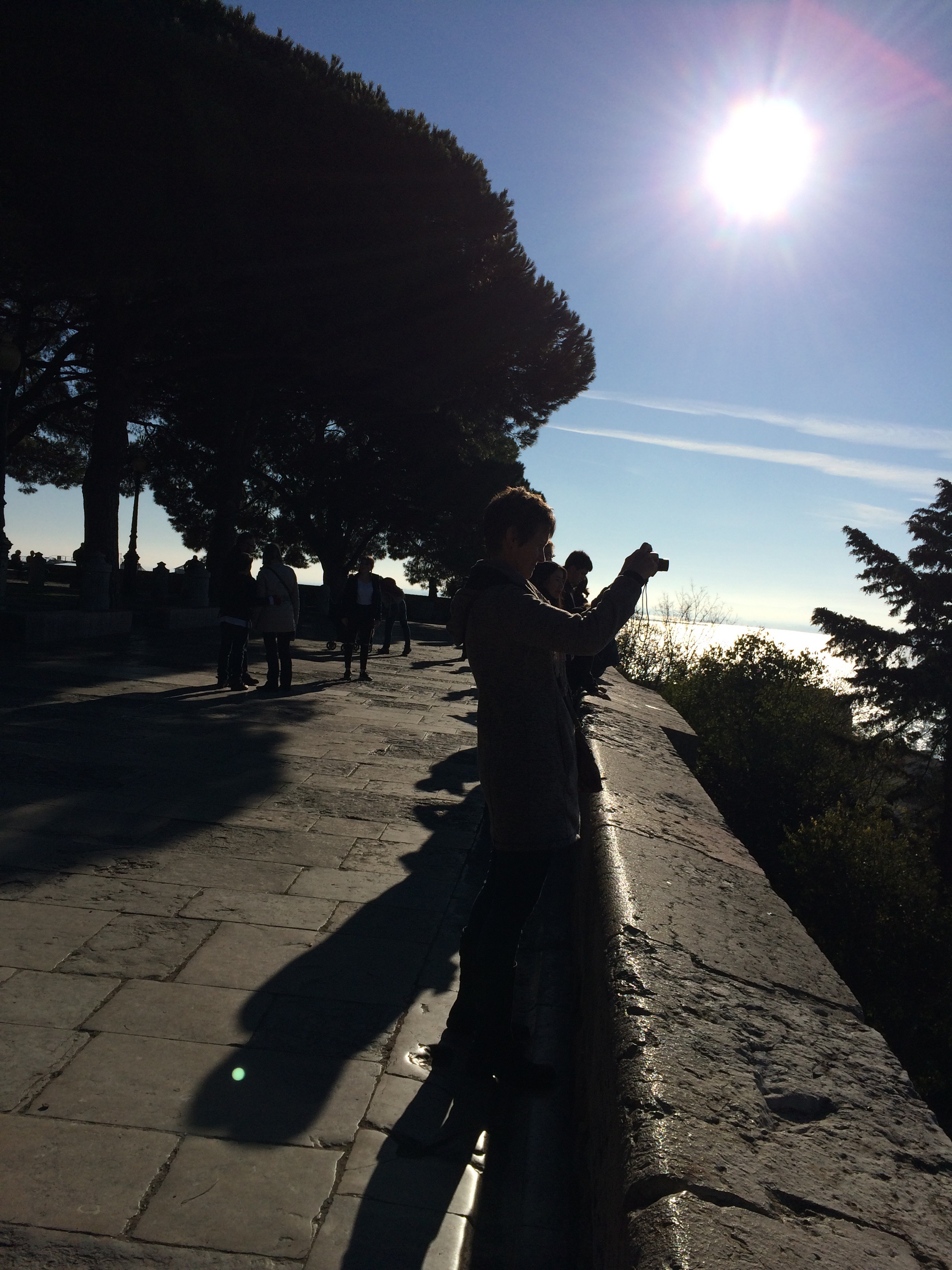 The views from the court yard are truly unparalleled, you can walk around the whole southern tip of the top of the Alfama hill which overlooks the whole city from the west to east. My mom couldn’t stop taking pictures, so I took pictures of her taking pictures.

Sometimes I accidently take pictures of myself and they turn out better than the posed ones. 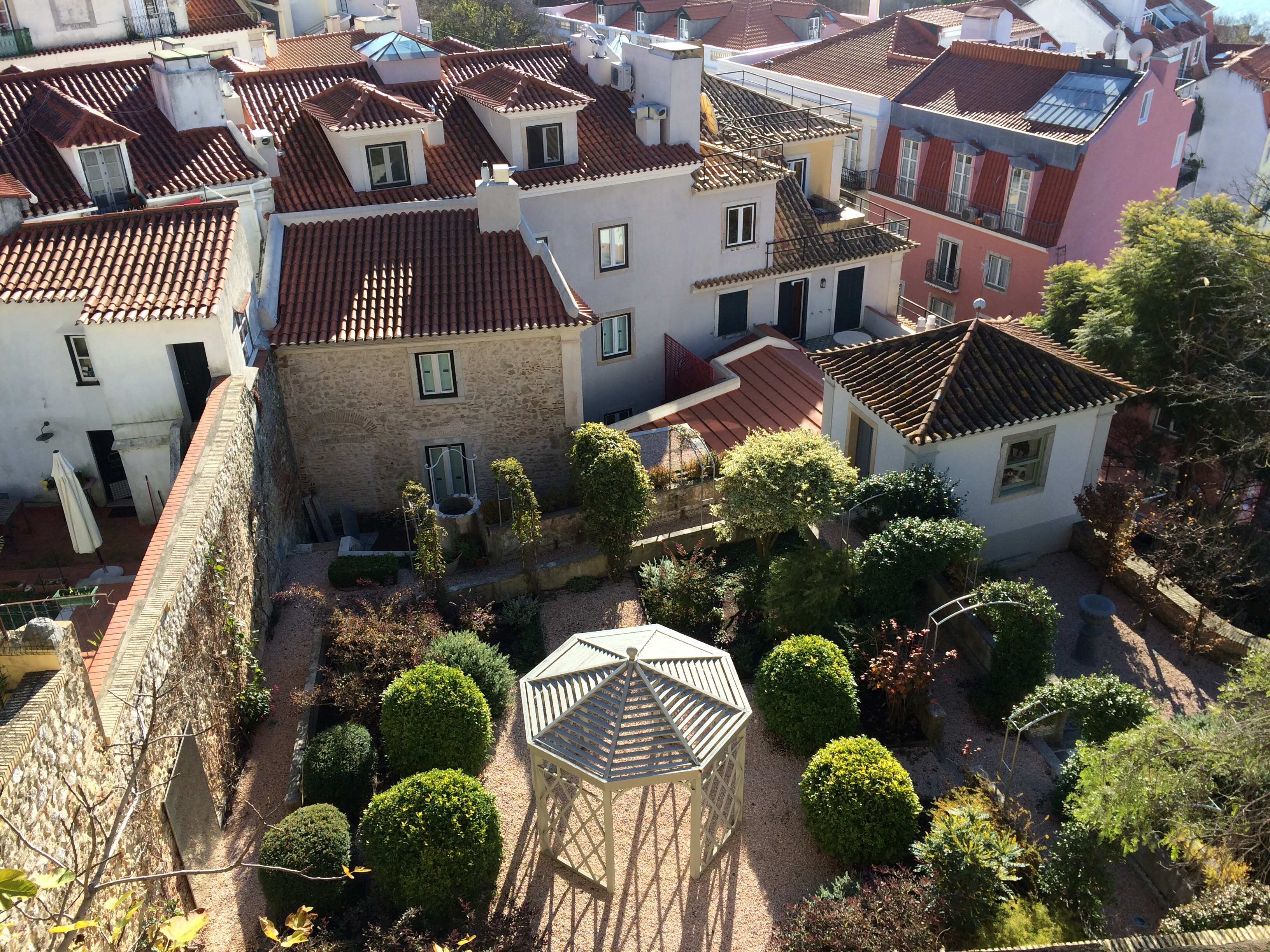 I was completely obsessed with these houses and their gardens. I took about a hundred pictures, dreaming up big plans for my own yard this spring. Too bad my house doesn’t come with stone walls and a terracotta roof. Someday, maybe, here is to hoping!
Address and additional information: R. de Santa Cruz do Castelo, 1100-129 Lisboa, Portugal