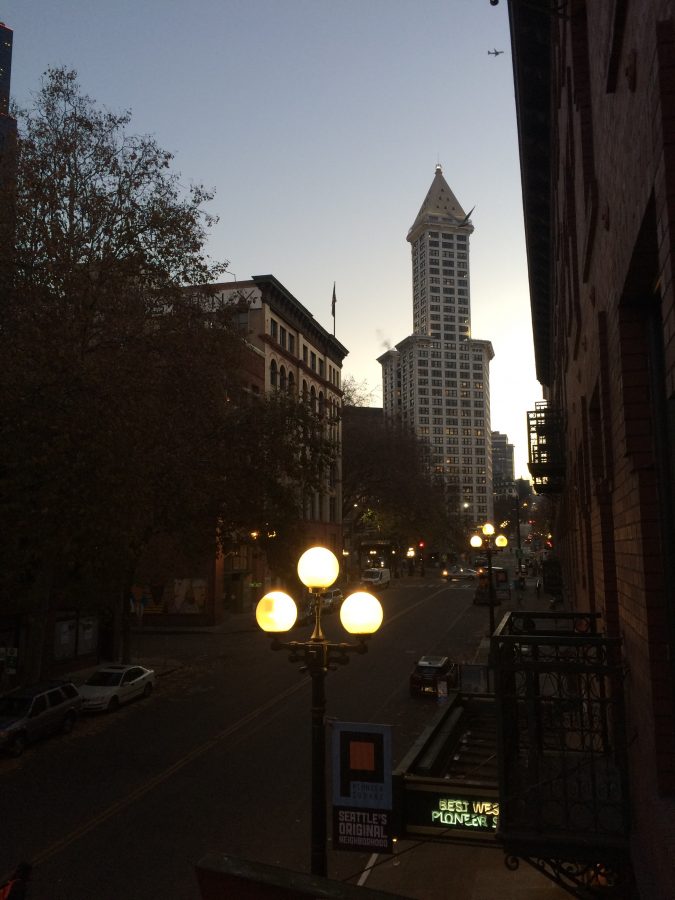 There is a lot to see and do in Seattle. Most people stick to the top sights, which is great. I however, being from the North West have spent a lot of time in the area and am always seeking different sights off the beaten path. Seeing Seattle’s International District in 24 hours, is one of my favorite quick trips to the area. It is a little funkier, a little bit out of the way, and full of some of the most terrible things to happen in Seattle’s history. Which in my opinion makes it a place worth getting to know. Not because I like spooky things, though I do, but because I think it’s important to learn our history and learn from our past mistakes.

Getting There From Portland

I personally prefer to not drive to Seattle. I used to, but the traffic in the Pacific North West has gotten unmanageable, as has the parking. So rather than stressing out and driving 5+ hours in traffic from Portland, I take the train. The train system on the west coast is not a great example of premium public transit. Our states are big out here, our cities are few and far between and as such there are very few opportunities to take advantage of the train. But the trip from Portland to Seattle is a breezy 4 hours, which gets you from city to city faster and less stressed than had you driven.

Seattle’s Union Station is just south of the International District and literally right next the sports area’s. It is a beautiful little station that has been in the throws of a remodel for quite a few years. My last trip up revealed the newly painted carved ceilings and an opened balcony. Tickets are relatively cheap, the trains are clean, usually offer Wi-Fi and always have a snack car. Plus the ride up takes you through some of the most gorgeous parts of Washington, which you would otherwise miss if you were on the interstate.

Seattle can be a pretty expensive town, and finding an affordable place to stay isn’t always easy. My most recent trip up I stayed at the Pioneer Hotel on the north side of the international district. It is currently under the management of Best Western but it still maintains much of it’s original charm.

The hotel was originally named Hotel Yesler after an early pioneer to the Seattle area a man named Henry L Yesler. When he passed away he left a sizable estate that for legal reasons had to be rolled into a company. The Yesler Estate, Incorporated built the Hotel Yesler sometime around 1914.

The hotel is old, but well kept with a small but tidy entry way. The rooms are lovely, with the original floor to ceiling windows and doors. My favorite part though is the complimentary breakfast that is provided in the original diner attached to the hotel.

There are a million things to do in Seattle it is a trendy international city with something for everyone. But often and at times for good reason the international district gets over looked. Many moons ago it was known as the cities skid row. It was also home to both Japan Town and China Town. Leading up to WWII both areas of town were booming but international conflicts such as the Fist Sino-Japanese war left some of the Chinese immigrants a touch unhappy with the Japanese population. When the Japanese were sent off to interment camps during the second World War, the Chinese took advantage of the lack of individuals in the area and expanded their business holdings.

Unfortunately today both areas of town are pretty depressed economically and despite the mass transit station right in the middle which pushes thousands of commuters through the area everyday there are still a lot of shuttered buildings. And where shuttered buildings exist so too does crime. So even though I love this area of town I would not suggest walking around at night. During the day however, I still think it is worth seeing.

Because I like history and literature one of my favorite hidden spots is the Panama Hotel. In it’s day it was a premium Japanese Hotel and Tea House. Today it is a modest hotel, with simple features but still an excellent tea house. It was also featured in the novel Hotel on the Corner of Bitter and Sweet by Jamie Ford, which is a truly touching novel about the conflict I mentioned earlier. Today the hotel also operates as a museum and memorial displaying items that were stored at the hotel and never reclaimed by Japanese families that were interned by the US Government.

Closer to the water is of course Pioneer Square which should not be missed even if you don’t want to spend time in the area. This was once the heart of Seattle. In the early days of the city it was mostly a wooden town, and like most wooden cities it suffered a devastating fire that burnt nearly the entire area to the ground. Even recently the area suffered a large amount of structural damage from a large earth quake, luckily measures had been taken to retrofit most of the buildings but it did effect the businesses of the area quite a bit. Today it hosts a large number of art galleries, restaurants, cafes and night clubs.

Just south of the Pioneer Square is Occidental Square, a charming pedestrian only space full of trees, which are surprisingly rare in the downtown area of Seattle. Every spring there is a Fire Fighters Celebration at the square which is also home to a Fire Fighters Memorial Statue and granite blocks on the square denote names of fallen fire fighters.

This area is also the home to the birth of the United Parcel Service. Tucked away oddly well disguised is a hidden garden with a very impressive man made waterfall commemorating the company that once stood in it’s place (the company’s head quarters are now in Connecticut). The garden is well kept and a very lovely spot to take a rest especially on a hot day.

There are thousand of things to do in Seattle, but if you want to see Seattle’s International District in 24 hours then I think you should, hopefully this will help you uncover some treasures hidden in a more overlooked part of the city.