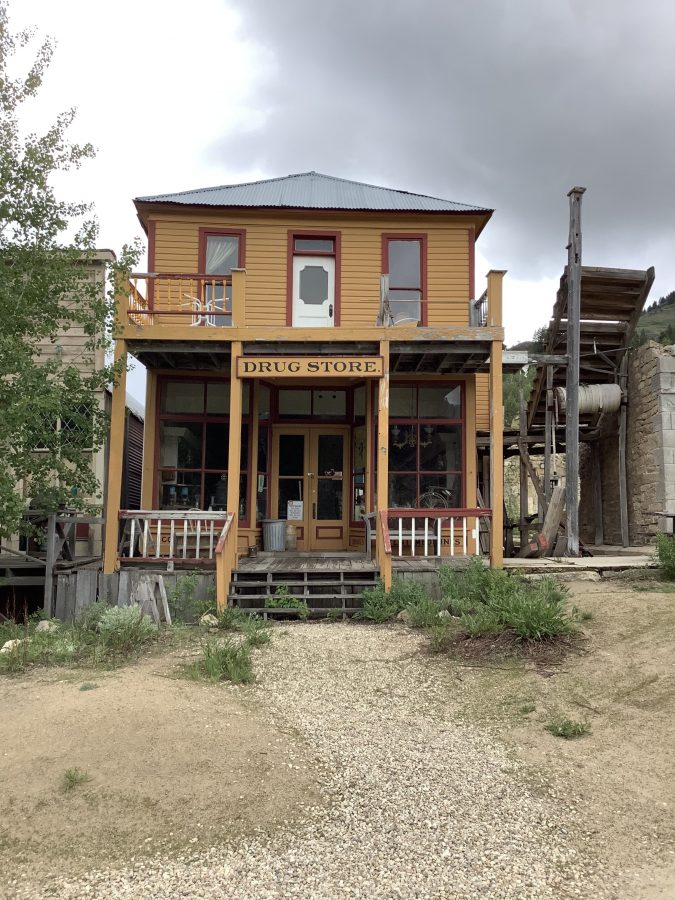 The absolute best thing I did this year was spend the night in a ghost town. Silver City and the Idaho Hotel are truly a treasure of American history and the old west. I cannot wait until next summer so I can make the grueling 500 mile drive back to spend more than just a night in Owyhee Mountains, it is well worth the drive. 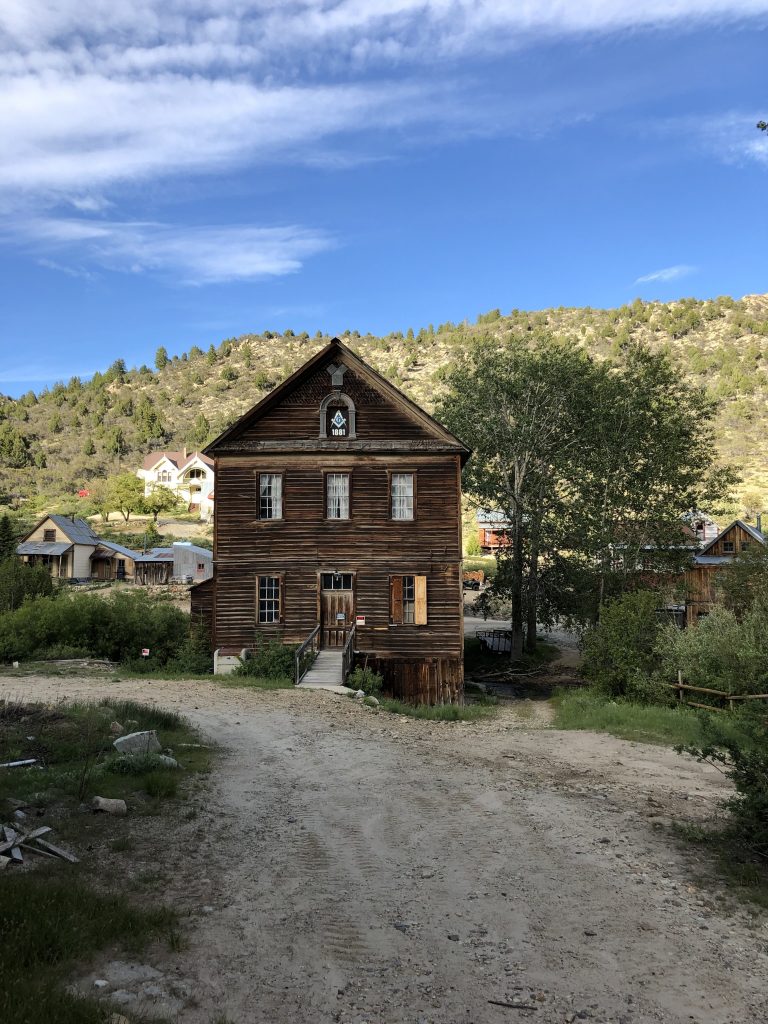 History of Silver City and The Idaho Hotel

Silver city was a mining town, mostly silver but some gold as well. It was a very bustling town in the 1800s with a population of 2,500 it boasted 75 businesses and was the county seat until 1934. In the late 1880s one of the largest stage coach lines in the west operated through the area and in the 1890s electricity was brought to the area. It was even once considered one of the four major settlements in the Idaho Territory. 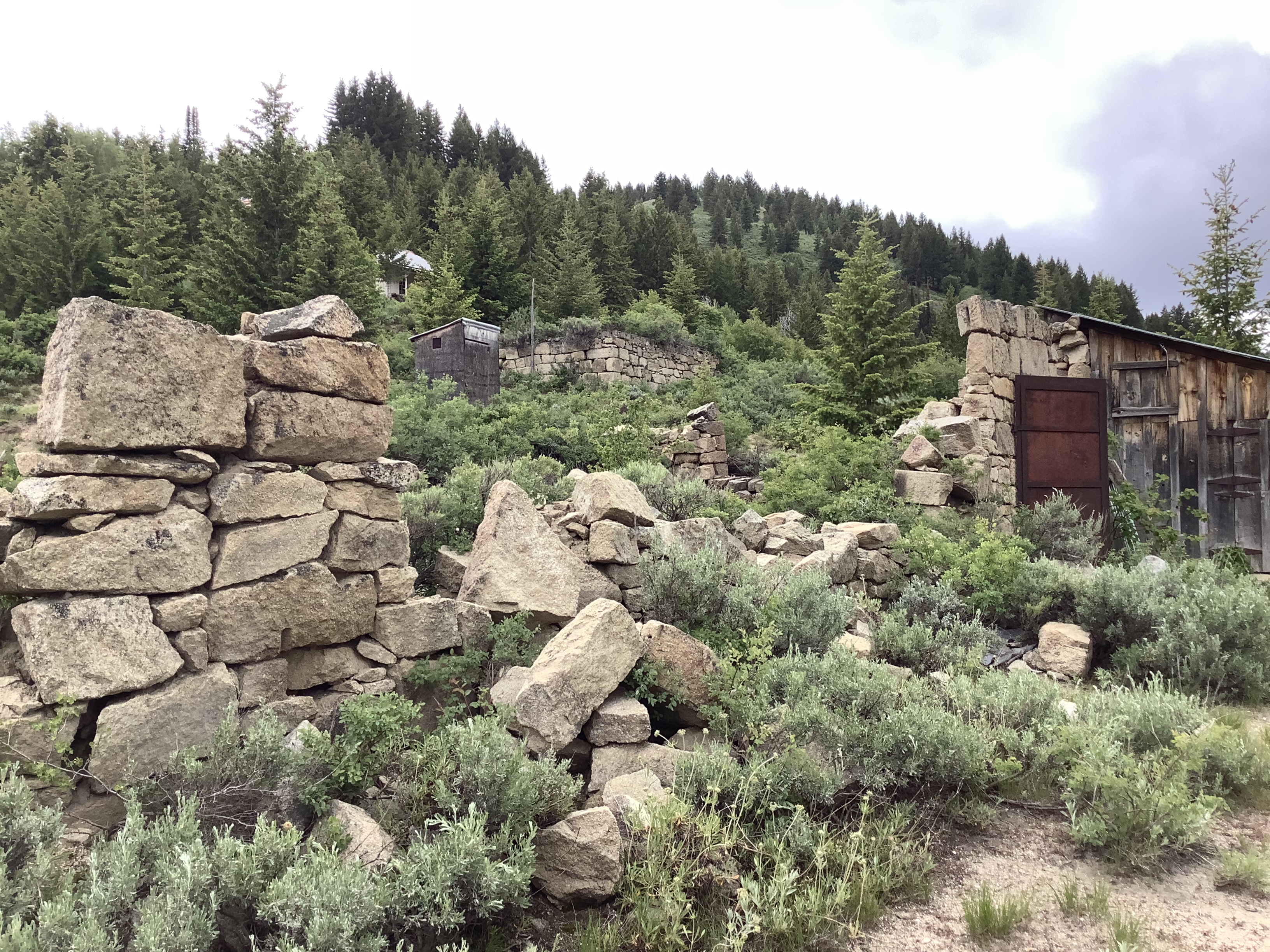 However about the time that Idaho officially become a state the mines were depleted and people slowly moved out of the area. The electricity was removed and rerouted to a nearby airbase and due to its remote location the city was left largely abandoned. 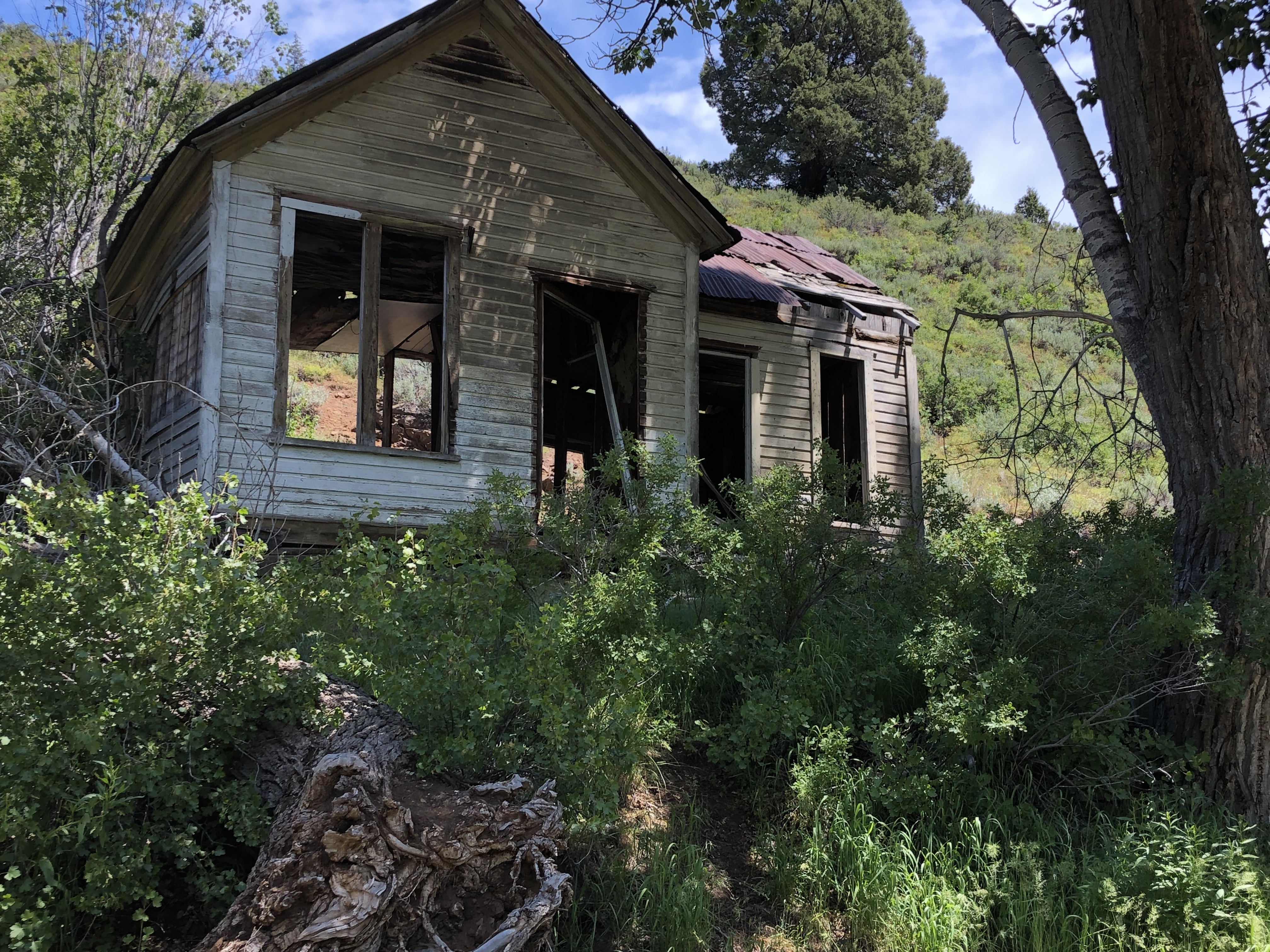 It was never entirely abandoned though, descendants of original settlers and intrepid mountain folk have keep the spirit of the place alive through handwork and a love of the unique site. Several families maintain houses in the area, returning each summer once the mountain roads are open again to spend their summers in the solitude of the quite community. During the open season there are several events to help raise funds to pay for a winter  watchman who spends the winters in the cold mountains accessible only by snowmobile until the weather turns each year. 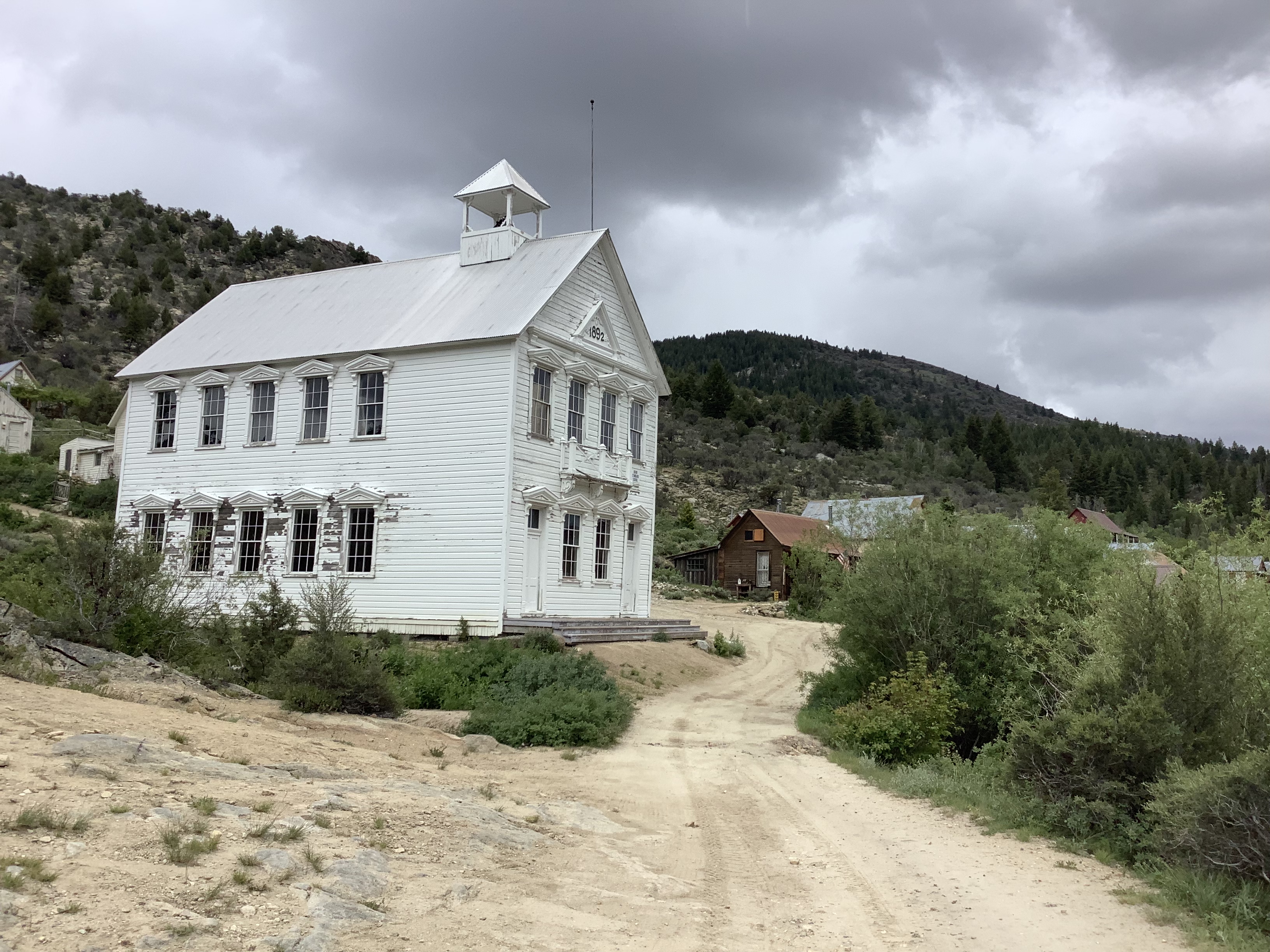 The Idaho Hotel was originally build just down the road in Ruby city, but in 1866 Rudy City lost the county seat and so the Idaho Hotel and many other buildings in town were dismantled, loaded on sleds and moved up the river to Silver City. In 1868 the popular hotel got running water, making the stay for those in town on business with the county much more comfortable. By 1889 a gambling hall, barroom, kitchen, bathrooms, and billiards parlor were all completed with hand milled woodwork from local craftsman. And by 1898 a five story addition was completed which included two stories of rooms, a dining room and a basement with storage tunnel beneath the hotel connecting to the mining shaft. 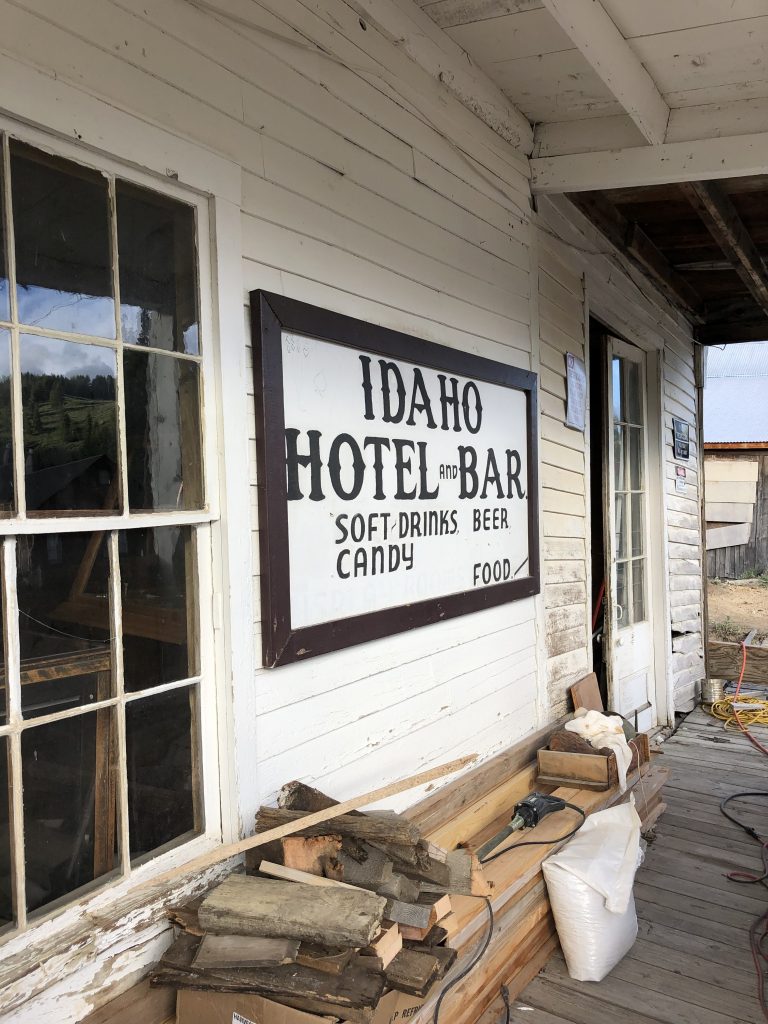 In 1942 due to the city losing the county seat, its power lines and the mines being shut down the hotel was closed and soon fell to disrepair. But In the 1972 Edward Jagels bought the Idaho Hotel which had been previously abandoned 30 years prior and began the slow process of restoring the old hotel. The current owners bought the hotel from Ed in 2001 and continue to operate the hotel and restore it.

Getting to Silver City and the Idaho Hotel

I won’t lie to you and say getting to Silver City is easy. Even if you don’t live several hundred miles away it is still quite the adventure. Today the city sits on land owned by the Bureau of Land Management, so the roads are somewhat maintained. I say somewhat because yes there are roads, but you need a four wheel drive vehicle with plenty of clearance to get there safety. I was told the fire department is dispatched several times a summer to rescue folks who have gotten themselves stuck. Before you embark on your trip be sure to have written directions, a map and a compass. You will not have cell service or GPS satellite. 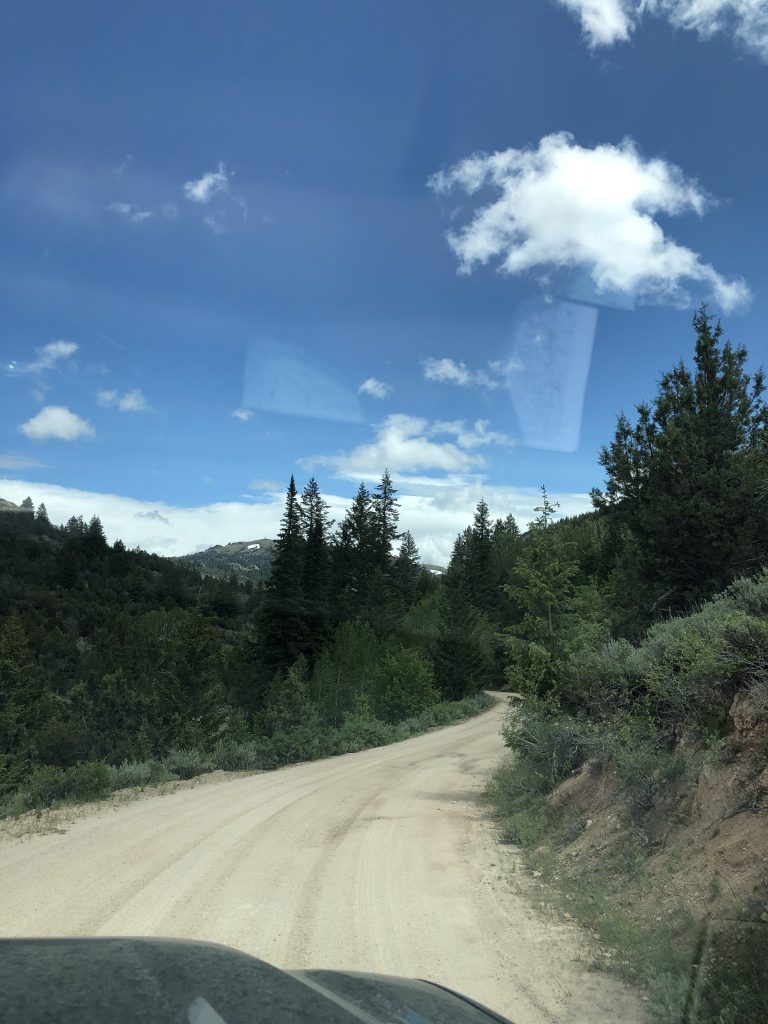 If coming from the Oregon side, when you leave Jordan Valley, it is a left at the first fork where you leave the pavement behind in favor of a gravel road. You will encounter three more forks in the main road, but with no road sign to follow. The first fork is a right (there is a sign for Silver City here), the second a left (a sign for a mining company) and the third is a right ( at the public restroom). The Oregon approach is by far the harder of the two, the roads are in much worse condition. From the Idaho side, take the main road up from the main highway continue left at the public restroom and you will be there in no time. We came from the Oregon side having driven over from the Frenchglen Hotel. 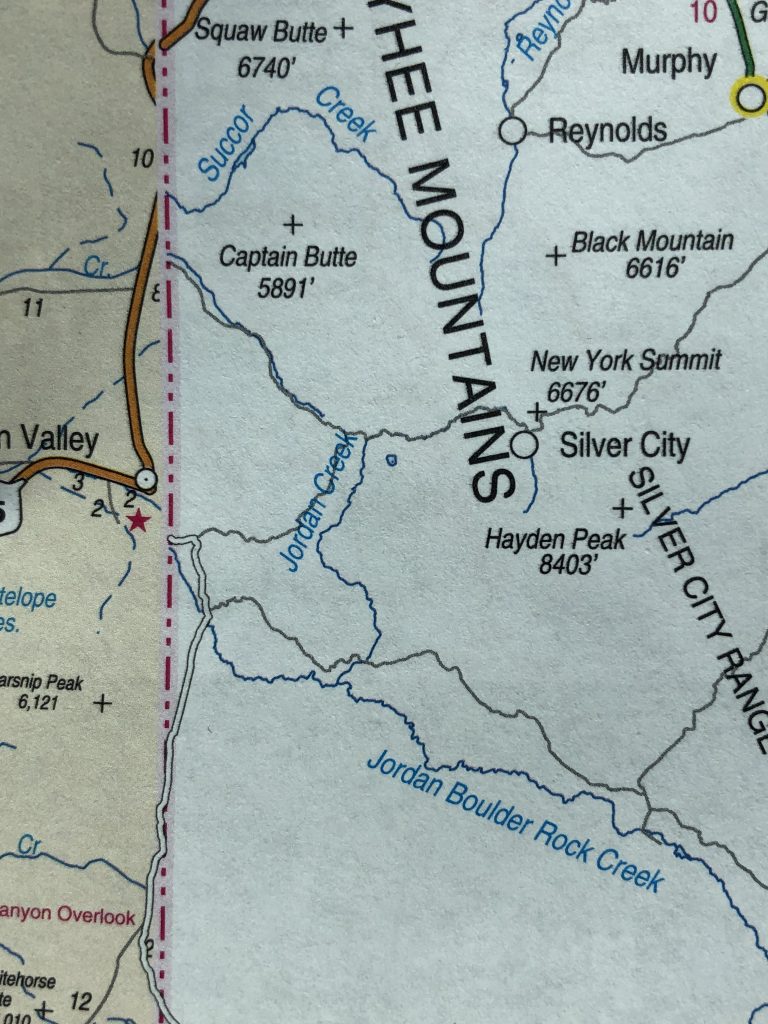 There are several events throughout the season in the area, mostly to help raise funds to pay for building repairs and the winter watchman. The area usually opens in late May around Memorial Day Weekend and stays open until the first snow. The main event is the open house which takes place two weekends after Labor Day every year, where local families open their houses for the public to walk around and learn about the town. There are also holiday celebrations for the 4th of July and Labor Day. 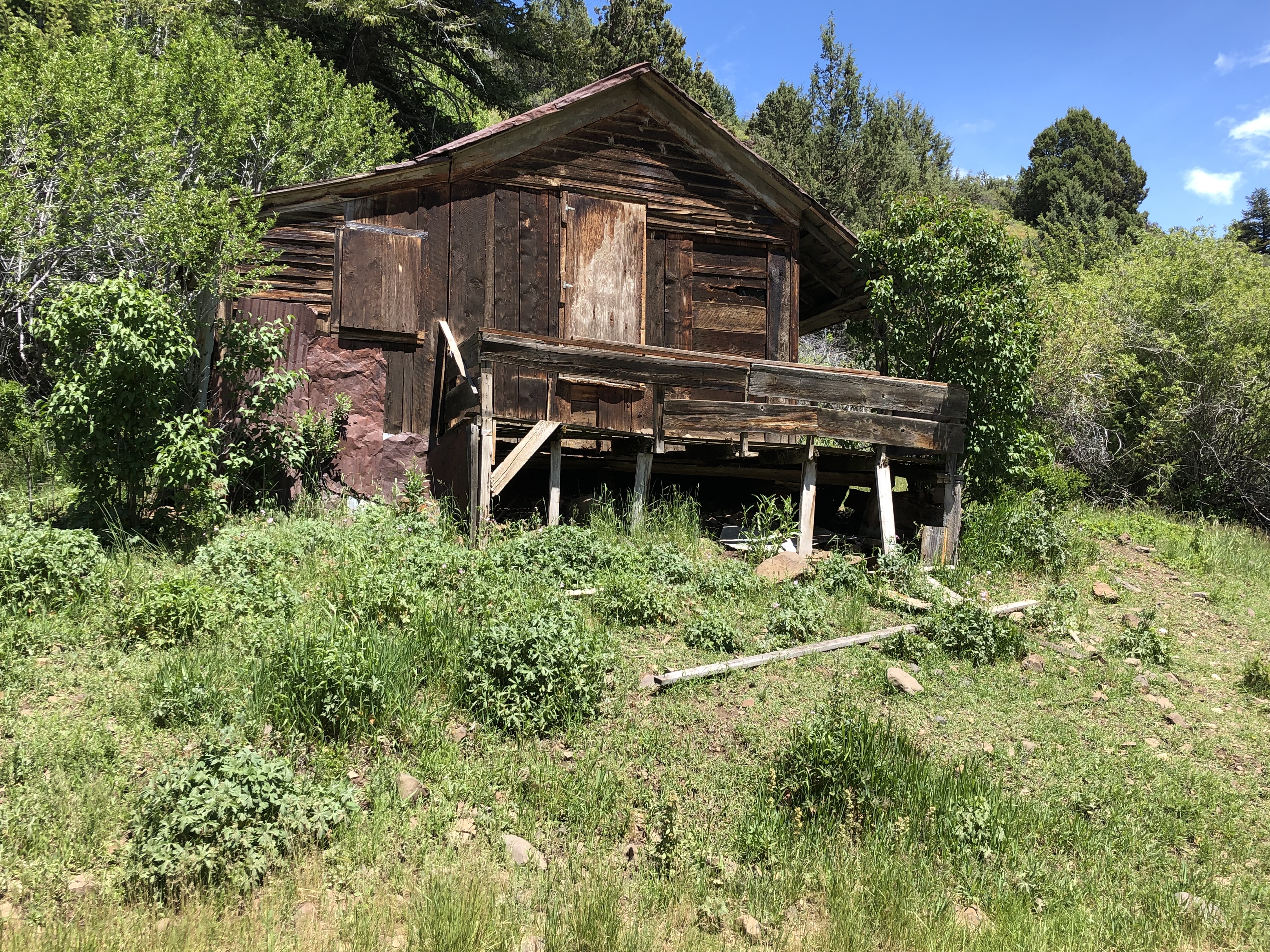 We went for the sheer joy of staying in and exploring a ghost town and spent our time either hiking around or chatting it up with the hotel owners. It may have been summer, but it was the beginning of summer and it was cold. At six thousand feet above sea level, the snow had barely cleared from the  mountain passes and it had been snowing the day before we arrived. We didn’t see any ourselves, but it was raining a bit when we got there. After checking in and being shown to our room, one of four with a working heater, we put on as much of the clothing as we had packed as possible and set out to walk around.

Every building in town is privately owned so exploring was done with utmost respect. We wandered around the roads, which are more four-wheel tracks than anything. And found ourselves at the top of the ridge overlooking the hotel where the school and church buildings are. Both of which were closed. Had we visited during the open house week however, we would have been able to go inside. 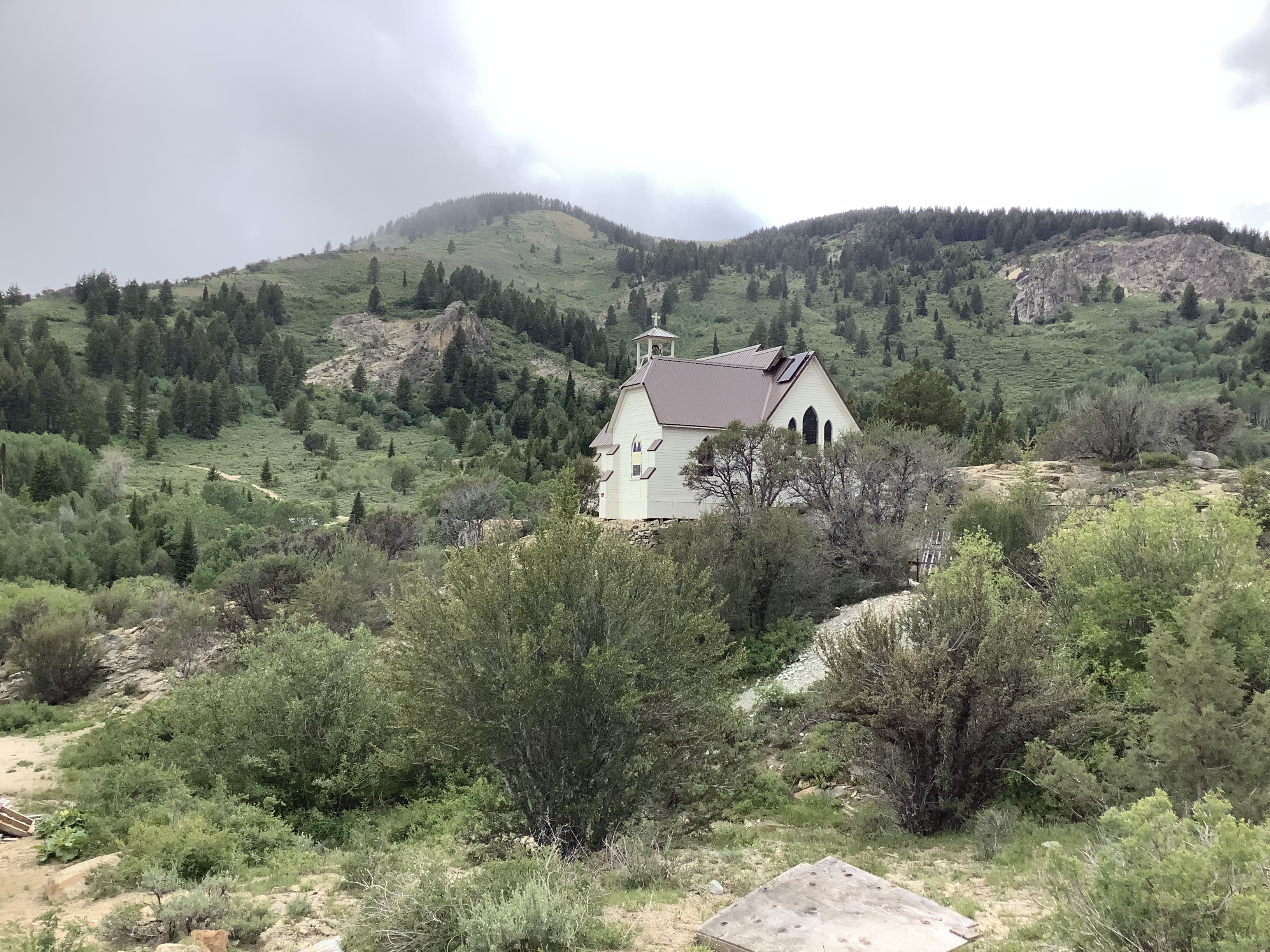 There are several building for sale at present, one of which is the masonic building that spans the small creek that runs through town. However no bank will ever loan money to buy buildings in town (as confirmed by the hotel owner) so individuals looking to own a heavenly slice of this secluded town must bring cash offers, plus plenty of money to help restore the old buildings. 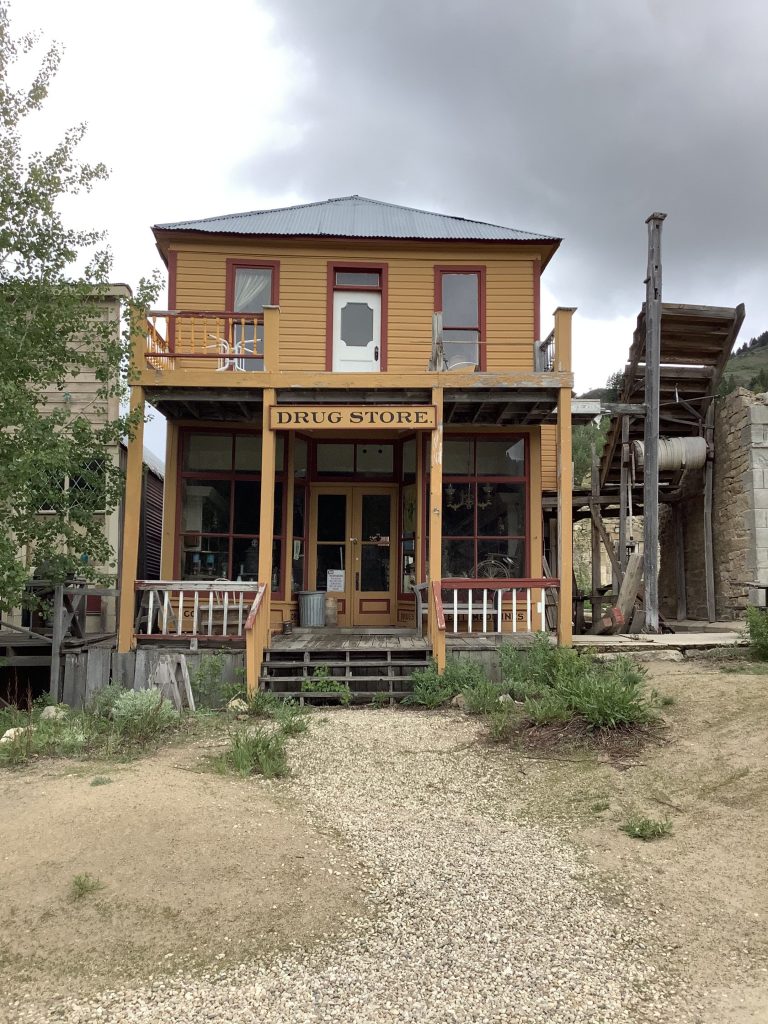 After walking every road in town, talking to everyone we came across, and making our way up to the cemetery for a little look around. We wandered back to the hotel, where I couldn’t resist a little look around, largely with my cell phone operating as a flash light since the small solar power grid only provides very weak LED lighting and not every room is wired.  I respectfully did not wander up to the third floor even though I was dying to see it, and also a little spooked thus a tad relieved to see the sign not to go up the stairs. After our look around we went back to our room cranked the heat, broke out the cheese and crackers and watched a downloaded episode of the Ted Bundy story on Netflix.

Since the power lines were diverted to the airbase many years ago, and given the lack of cell service we knew going in that if we wanted to watch anything we would need to download it ahead of time. We also knew we would need to have fully charged devices and backup batteries. Upon checking in the owners will remind you of the sensitivity of their solar power grid, long story short don’t even think about plugging in a phone or a hair dryer. You would kill the power to the entire hotel. And since the hotel is the only place in town to eat, you would be effectively ruining any chance of getting fed during your stay.  You would probably also be asked not to return. 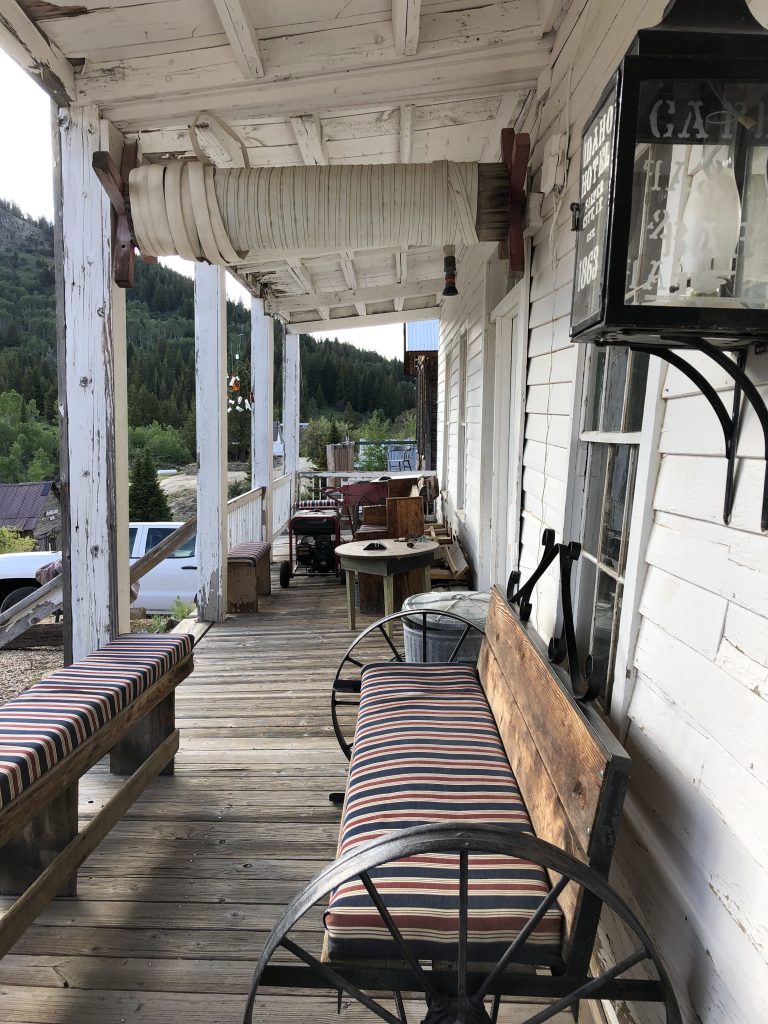 At the appointed time we made our way down to the main dining room which leans ever so slightly outward so while eating dinner you feel a bit like standing on a cliff. The dining room is likely no different than it was in its heyday, a little rough and tumble flanked by a gorgeous hand plained bar on one side and antique shelves covered in artifacts from the town.  A veritable museum of the towns history which was thankfully heated by a gigantic cast iron wood stove in the center. It was the warmest part of the hotel and we wound up staying quite a while during both dinner and breakfast chatting with the owners and their daughter.  A couple hours after we had finished our dinner a group of locals made their way to the dining room and we made a graceful exit back to our room. The diner was delicious and huge, we were tired and stuffed so we went back to watching our downloaded Netflix and settled in for the night. 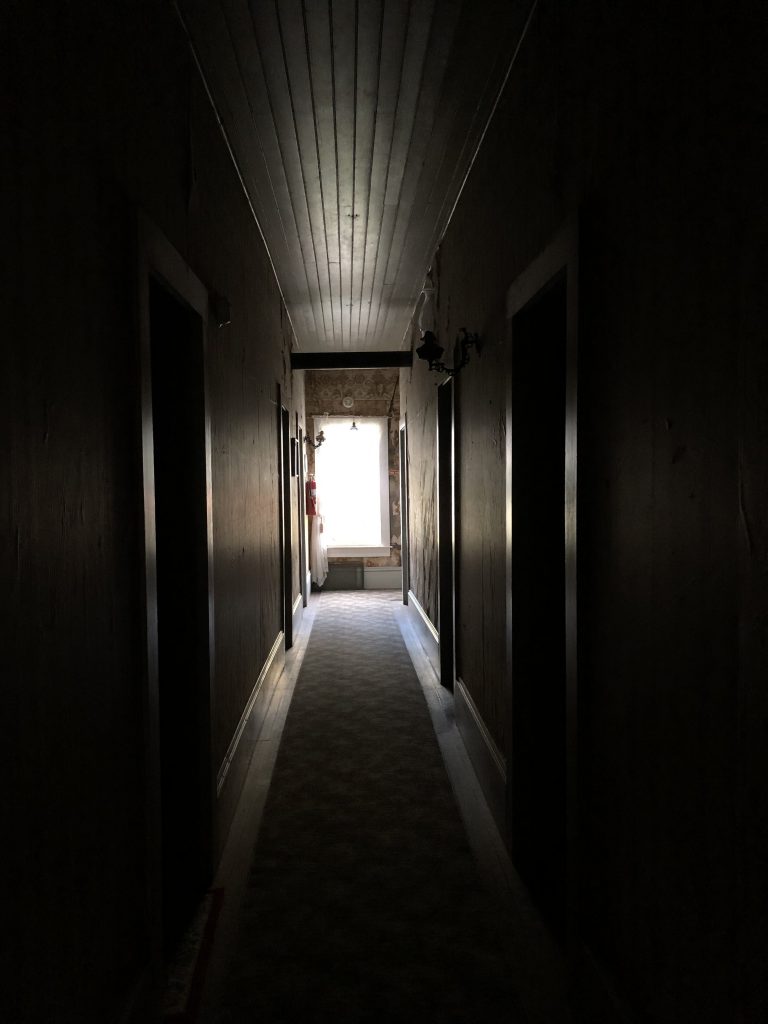 We had zero encounters with things that go bump in the night. The daughter of the hotel owners ensured me that never once had she experienced anything weird in the hotel. I felt 100 percent safe and comfortable the entire time. But that doesn’t mean I was thrilled to have to use the restroom in the middle of the night which was outside our room and down a very long, dark, freezing cold hallway. When morning came, despite the constant running of our heater (we got one of the few rooms with heaters) the windows were frosted over, and our truck had to be de-iced. We once again made a mad dash in all our clothes down to the dining room to fill up on hot coffee and stand around the stove. 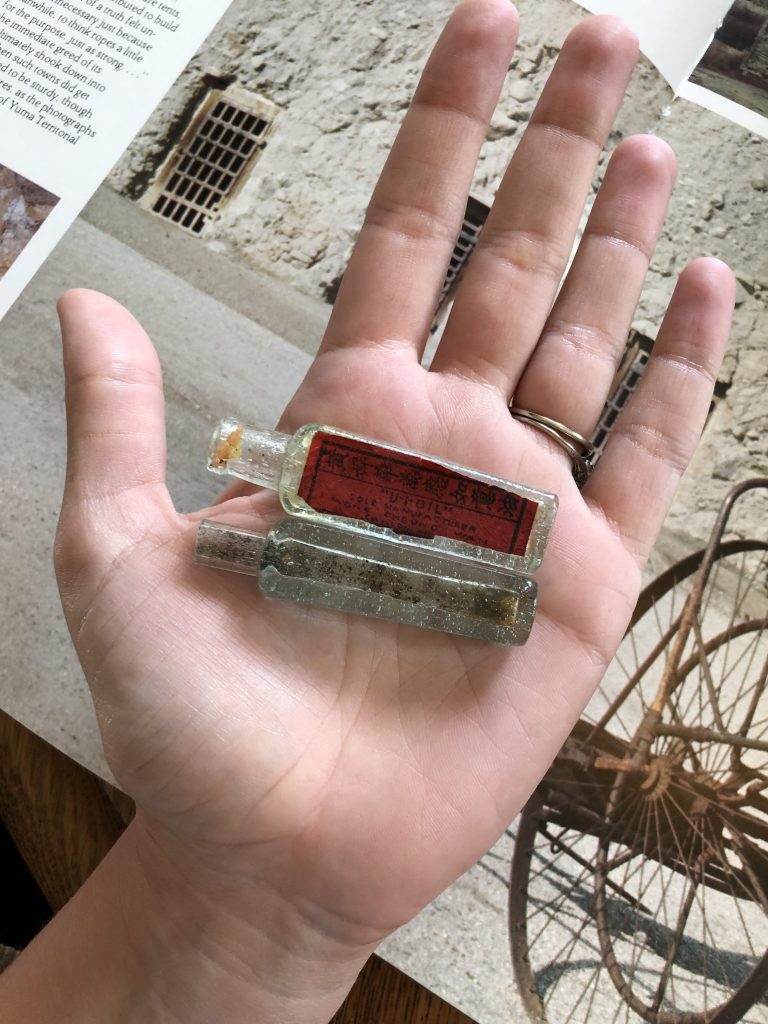 We chatted with the owners more after breakfast, getting a tour of found objects in the area, like these opium bottles with intact labels. We learned all about the history of the town and the hotel. We got to hear funny stories about locals and what it was like growing up there. We listened with rapt attention to stories about renovations, brining ovens and fridges up to the hotel in the dead of winter on sleds. And thankfully unfounded evacuation plans during fire season. We were both reluctant to leave, feeling kindred spirits with this lovely family whose seasonal life and cautionary tales reminded us both so much of the fishing season. The migration every year, the off the grid lifestyle, the characters you meet and the friends that become your family. It felt like home and it was difficult to pull our selves away. But our long drive ahead and the trepidation of meeting tourists coming up the hill on the narrow roads finally motivated us to head down the mountain. 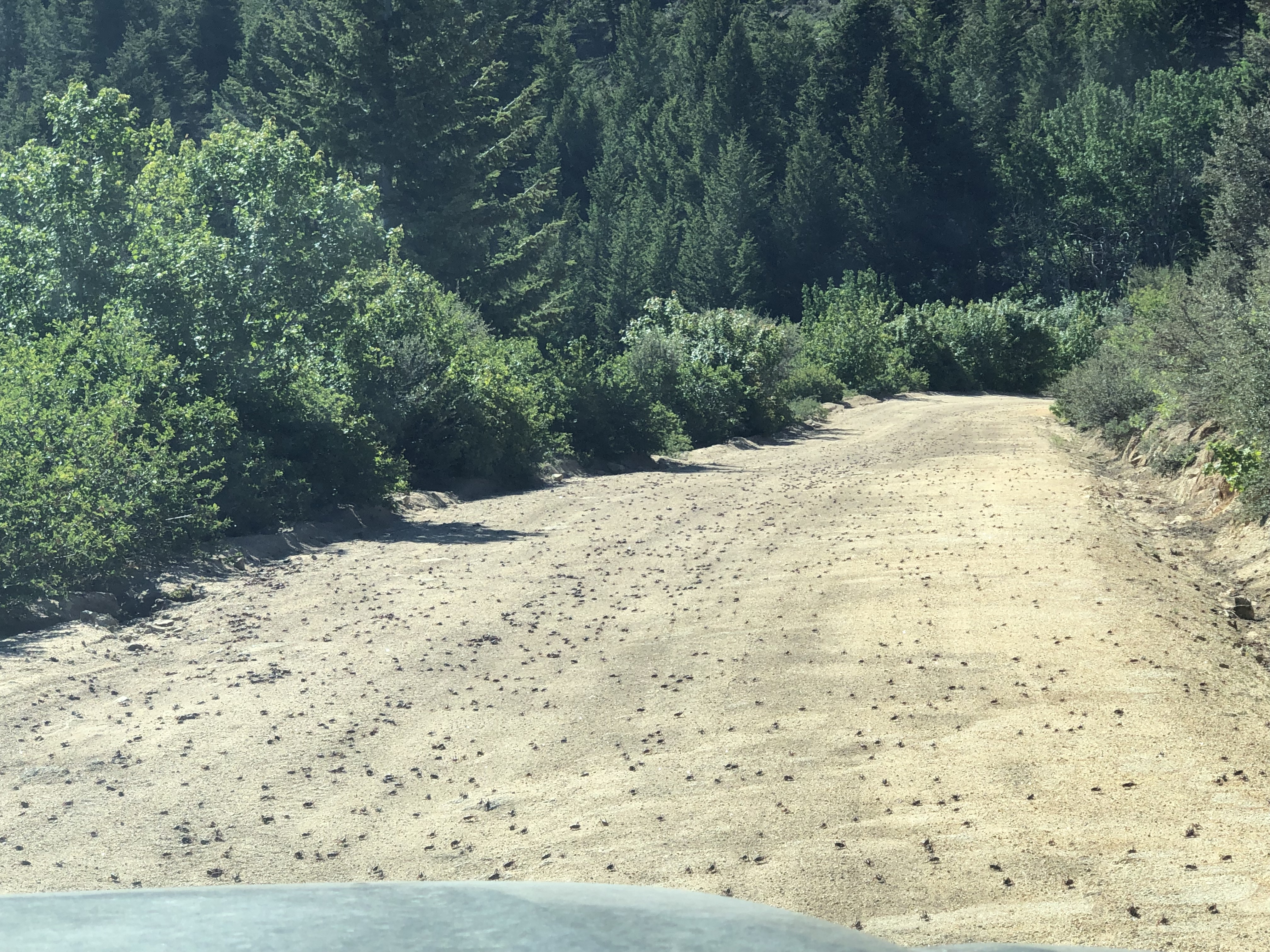 The drive down was blissfully easier on the Idaho side, though marked by the occasional traveler the road was much wider and entirely covered in crickets. Big super jumpy fat Morman Crickets which were clearly in their swarm phase. A couple times we wanted to get out and take pictures of the views but the fact that they were jumping close to two feet in the air kept us locked in the cab the entire way down the mountain. 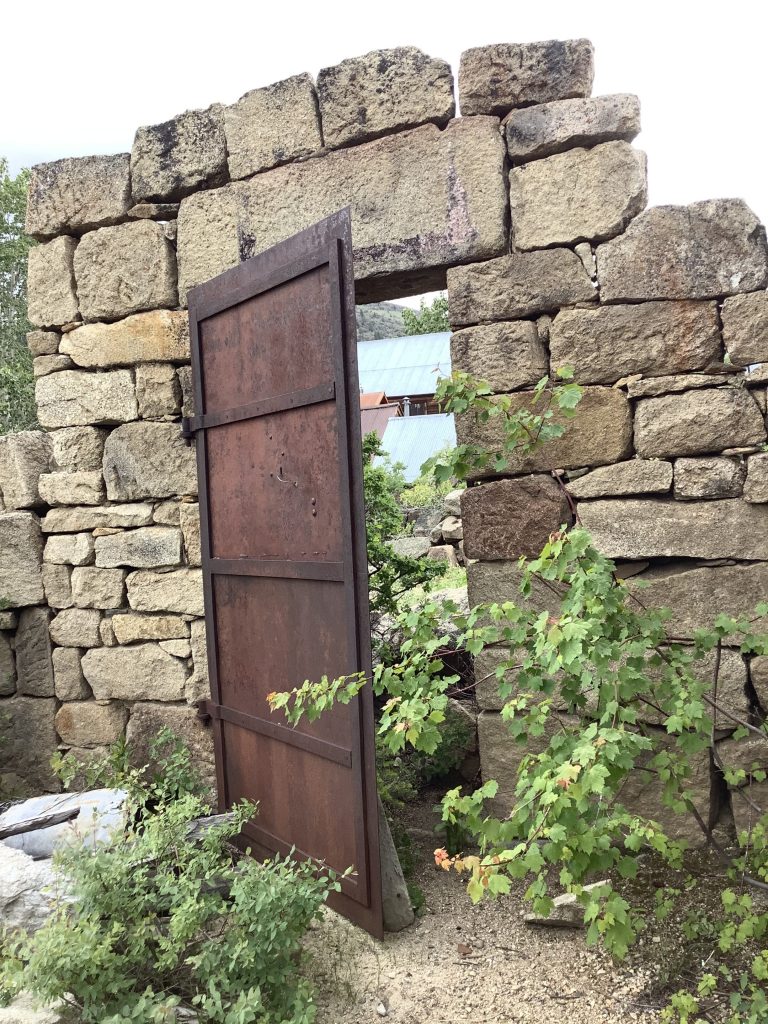 We ended our ghost town adventure with smooth sailing north through Idaho to cross over to Baker City Oregon for the night. While our stay there was much more luxurious I will always prefer the adventure and sense of belonging from places like Silver City and the Idaho Hotel. I hope to make my way back next year, hopefully later in the sumer for a couple nights so I can make use of the ample hiking in the area.