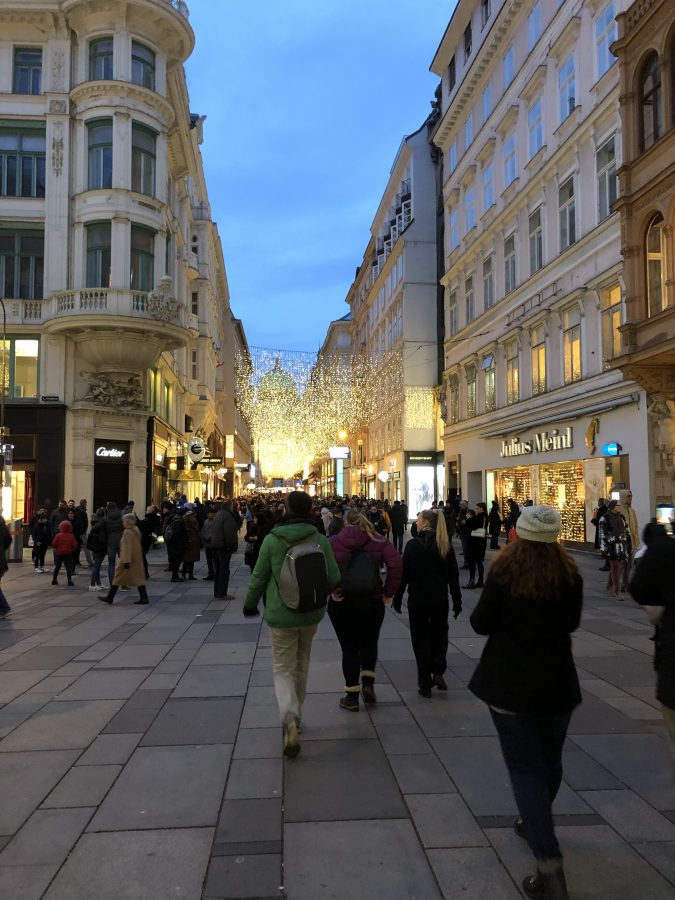 Lets talk about the logistics of staying and getting around Vienna Austria shall we? Because to be honest I have really been struggling with writing up our trip to Austria over Christmas. For one reason only SEO. If you will allow a mini rant, SEO (or search engine optimization) really takes a lot of creativity out of blogging. Basically if you want traffic you have to follow certain rules and formats and the whole thing is a real buzz kill. So I am still wrestling with a way to share the trip with all of you, while also making sure things show up on search engines, but also wanting things to feel organic. You can read about our overnight in Budapest here, and hopefully by next week I will have figured out how to get you the goods.

Getting to Vienna Austria

If you are coming from the United States, or really anywhere other than mainland Europe it is best to fly into Vienna. The airport is small, easy to navigate and only about 25 minutes from the city. There is public transit from the airport, as well as rental cars and taxis. We organized a car to pick us up from our apartment rental because while you can save a lot of money by taking public transit, after 23 hours of travel we knew we would just want to be there already.

One thing I will say about flying into Vienna is don’t repeat our mistakes, unless you like to live on the edge. Many airlines will sell you short layovers at connecting airport like Amsterdam, and yes we did make our connection. But our bags didn’t and the stress of getting through passport control in busy connecting airports is not worth it, in my opinion. If you find yourself in Vienna without your baggage the booth next to the first carousel will be able to handle everything. But if you having a driver waiting for you, send some one out to let them know what is happening. Thankfully ours didn’t leave us, but he did say eventually he would have had to go onto his next pickup.

If you are coming from mainland Europe by train you will most likely be headed to the new Central Station located on the boarder between the 4th (Wieden) and 10th (Favoriten) districts. It’s new, its big, it’s glossy and has everything you could possible need including bus transfers (top level), ticketing office (top level), subway connections (basement level), and food (all levels). The kind people at the ticketing office most certainly speak English, and to be frank most people in Vienna do.

Getting Around Vienna Austria

Absolutely 100% buy some sort of public transit pass. We bought the weekly passes and used them daily. They are about 18 dollars a person, last a week and you can hop on and off any bus, trolley, street car or subway within city limits. The system is incredibly easy to use, with pictures at every station of the entire system, color codded by line, and each station has maps of its own line with every single stop pictured so you know exactly which platform to wait on. Getting lost is nearly impossible as long as you can keep yourself from getting swept up with all the commuters.

Passes can be bought in subway stops, though not bus stops or trolley stops. The underground stops are on nearly every street corner it seems like, and the ticket kiosks are in multiple languages including English. I wouldn’t really suggest a car, unless you are staying in an outer district and are planning on taking a lot of day trips (but even then the trains are great) because parking in the city is very limited. I saw one public parking garage in two weeks.

Also take advantage of walking, the inner city (district 1) which has an endless amount of activities is very walkable, many sections of the inner city don’t allow cars so it is actually easier to walk than drive. But do download a map to use while you are there, like most European cities the streets evolved over hundreds of years. Roads twist, turn, have multiple point intersections, streets come off spoke like in some areas, and in others in grid like patterns.

I would highly recommend staying in the inner district (innere stadt) in Vienna simply for the convenience. This is the main tourist area, it can be a little more expensive to stay in this area. But the things to do and number of restaurants is truly endless. Additionally it seems like a lot of the public transit routes either ring the inner district or travel through it. So if you are planning on visiting other areas of town it makes for a great base.

We rented an apartment from a company called Elegant Vienna I had originally found the apartment on a vacation rental site but after speaking with the owner Christian I booked directly with them which saved me a lot of money. They have apartments of all sizes, and ones that are multiple bedrooms which can often be hard to find in Europe. So if you are traveling with a large group or want lots of space I would highly suggest giving them a look.

Vienna is a huge tourist destination and as such there is no shortage of hotels, rentals and hostels to meet any persons need and budget. The further you get from the inner district the cheaper your accommodations will become. And while some districts may be prettier than others, there are really no unsafe areas of the city. The worst you may encounter, unless you are actively picking fights with people, is you may get pick pocketed.

Eating in Vienna is probably my favorite past time, the food is so good. No matter what flavor you are looking for they have it, even Mexican food which is so rare this was the first time I had encountered it. Austrian food in delicious but heavy, it is hard to find a fresh salad that is not covered in something pickled. So if you are staying for an extended period of time I would pepper in a few lighter home cooked meals.

Grocery stores are easy to come by, though they often don’t resemble grocery stories especially in the older sections of the city. There are three main grocery chains in Vienna, Merkur which is a high end grocery, Billa fairly standard and SPAR a bit more on the budget side. There are also loads of small intendant shops. But don’t forget these aren’t standard American supermarkets. You don’t find toilet paper, cleaning supplies or makeup in them that you have to get at a store called BIPA. And you won’t find medications of any store, that you have to get at an apothecary, which is run by an attendant who you tell your symptoms to and you buy what they give you. For us this included the single most disgusting cold remedy I have ever tried (shame on you Bayer for even inventing something so foul).

You will also find bakeries and coffee shops on every single street. Pick any random one you really cannot go wrong. Strock and Anker are common around town. Our favorite was Grimm because it was outside our front door. The most popular is probably Central Bakery due to its famous former patrons and the interior is spectacular. But if you want the experience, get there before they open and be the first in the door, otherwise you are in for a very long wait.

Staying and Getting Around Vienna Austria

I hope this helped answer some of your logistical questions. Next week I will be starting the series on the trip even if I can’t figure out how best to organize and appease the SEO gods. Thanks for tuning in for staying and getting around Vienna Austria.