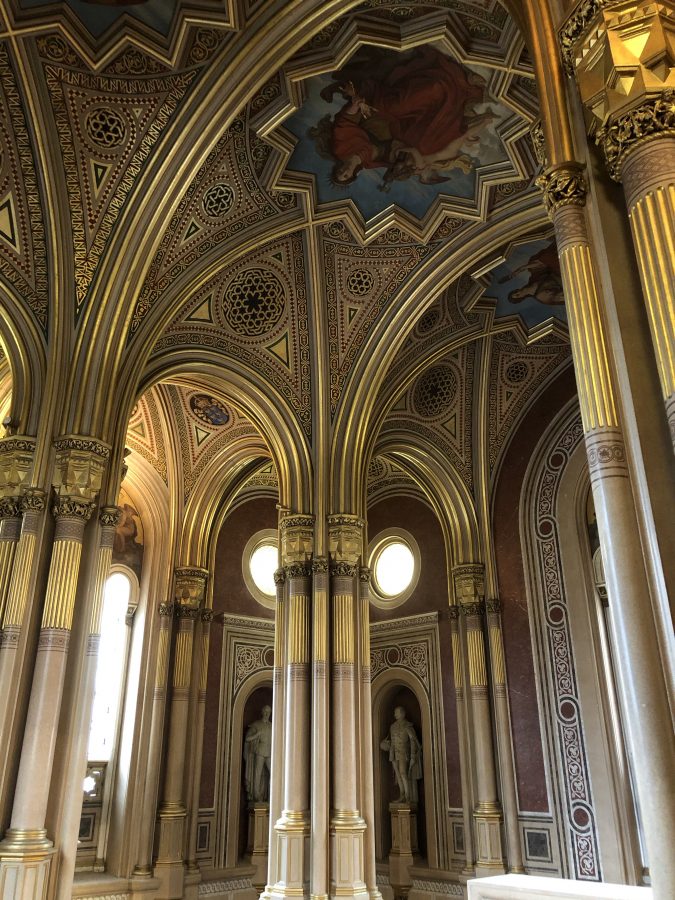 The Museum of Military History was the first major stop on our recent trip to Vienna. Though in truth it was the second day of our trip. When we arrived around midday sans-luggage we had to stay on call close by the apartment to await the eventual arrival of our belongings.

The majority of that very first day was spent trying to stay awake, walking around the inner city in a haze, eating dinner and playing cards while trying to stay awake for the 10pm baggage drop. We wandered around our neighborhood, past St. Stephens for the first time. Scoped out the local grocery store (Merkur Hoher Markt) which happens to be next to the stunning Anker Clock funded by the Anker Insurance Company in 1914 during the expansion of their offices and designed by Franz Matsch a friend/student of Gustav Klimt. We also ate dinner at Ofenloch which shares the same building as the apartment we stayed in. It was a very delicious traditional Austrian meal. Open on Sunday which is a huge plus as not much is in Austria.

This while I called the airlines no less than 7 times trying to get a confirmed delivery time, it was…fun (insert eye roll). But lesson learned, and a lesson you do not need to repeat thanks to my mistake, an hour lay over in Amsterdam is enough time to catch your flight (if you run) but not enough time for you luggage to be unloaded off an international jet and sorted to its proper regional carrier. Don’t be like me, give yourself more time for a layover.

The First Full Day of Our Trip

So our first full day of the trip started with a trip to Bakeri Grimm (which was repeated most days) as nothing else was open yet and we were all horribly jet lagged and starving. We loaded up on pastries and sandwiches and scarfed those down while we waited for the grocery store to open. Once the grocery opened we stocked up on food to get us through Christmas (everything is closed Christmas Eve through Boxing Day), unloaded our haul and headed out towards The Museum of Military History. This included a walk to the St. Stephens Platz underground stop, buying our weekly transit pass. Not understanding how the weekly transit pass worked and validating them (not needed), shockingly getting on the right train and landing at the Vienna Central Station. Where we bought our train tickets to Budapest since the office one again, would not be open on Christmas Eve through Boxing Day. Sensing a theme yet? We then set off from the central station to The Museum of Military History, on foot, during the worst weather of our entire trip.

The Museum of Military History

The Museum of Military History was a site that my husband and I had every intention of visiting during our honeymoon but ran out of time. So it was pretty exciting to finally get to visit it. The Heeresgeschichtliches Museum – Militärhistorisches Institut is the leading museum on Austrian Armed Forces. The building itself amazingly was built as a museum by Emperor Franz Joseph with the intention of housing the Imperial Arms Collection and paying memorial to the Imperial Army.

The exterior was completed in 1856 but work continued until 1872 on the interior. The front hall housing statues of 56 of Austria’s most memorable field commanders. The museum was nearly entirely destroyed by allied bombs in 1944, but was rebuilt and officially reopened 24 June 1955. The museums consists of 8 different halls, a tank yard and several Artillery Halls.

Hall I is called “From the Thirty Years War to Prince Eugene” and it covers history from the 16th and 17th centuries. The highlight, if you can call it that, of this period in Austria was the 30 years war. And this portion of the museum houses suites of armor, weapons and a lot of details on the wars with the Turkish armies. Hall II covers the Spanish War of Succession through the years of Maria Theresa’s reign (Marie Antionette’s mother).

Hall III covers the period of France’s revolution, a time period where much of Europe was going through revolutions. Austria was embroiled first with the last of the Ottoman Wars, and then took to fighting off Napoleons advances across all of Europe. Hall IV is dedicated to Joseph Radetzky Von Radetz, a truly impressive military leader who served for 72 years under 5 emperors. In fact on 31 August 1848, Johann Strauss first performed The Radetzky March a piece of original music in memorial of the famous commander.

Hall V covers the assassination of Franz Ferdinand a conflict that continues into Hall VI for WWI and the end of the Hapsburg Monarchy. These halls made the most sense to me as it is a period in Austrian history that I know the most about. I was also really loving all the ornate military uniforms.

Hall VII covers the era from 1918 to 1955, and as a military museum focuses mostly on the campaigns and conflicts that occur by the hands of the Austrian people. This is not a Holocaust museum, it by no means glosses over the period in history but if you are looking for in depth information this is not the museum to find it. If you are looking for a Holocaust museum and memorial I would honestly suggest visiting Mauthausen, they have put tremendous effort into the memorial and museum. It will be a very somber visit but if you are interested in the topic it is truly incredible. Most of the information here covers the civil war Austria endured between the world wars, the dissolution of their monarchy, and the assassination of Federal Chancellor Dollfuss which lead to the annexation of Austria by Germany.

Hall VIII talks about Austria’s Navel History, which is surprising given it is land locked. But once upon a time Austria was the seat of the Holy Roman Empire and had lands stretching down to the Adriatic Sea. This section also touches on patrolling the Danube which connects with Hungry which was once under Ottoman rule.

The Tank Yard and Artillery Halls are closed in the winter so we didn’t get to visit those. But there was a small outdoor section with a couple tanks as well as a temporary building full of information on more recent peacekeeping campaigns that the Austrian Military has been involved in.

The lobby also has a nice little café and gift shop. We wound up eating here and had a delicious lunch. After we left the museum the weather had cleared up a bit, I had used the museum Wi-Fi to locate the closest transit stop so we didn’t have to walk all the way back. We hopped a very toasty street car over to the Rathaus (city hall) where one of the many Christmas Markets was being held. We spent the rest of the evening doing a little shopping, sipping Glühwein (mulled wine) and hot chocolate. But it was very cold and we were still pretty damp from the earlier rain so we grabbed some food to go and went back to the apartment for dinner and cards.

This was by far one of our favorite sights in Vienna, it covers a lot of information and it also covers a lot of information from a local perspective which I think is really important if you are interested in studying history. Most of what we are taught is strictly from an American perspective of world history, and it can look very different from the perspective of those on the ground. So to get that insight in things like the Ottoman Conflicts and the Napoleon wars is really fascinating. If you are ever in Vienna and have any interest in history I would highly suggest The Museum of Military History.