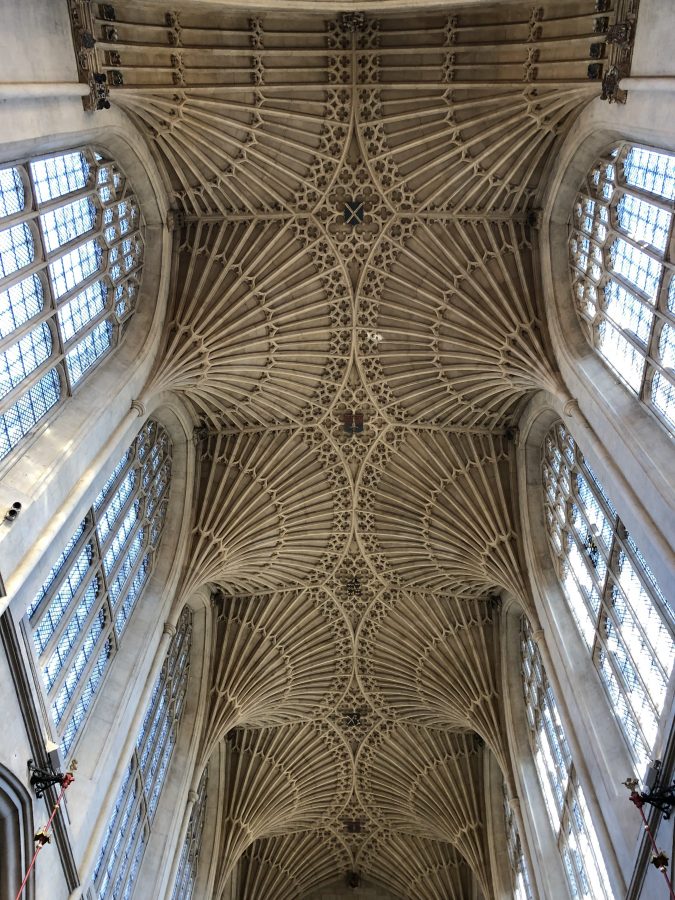 The Roman Baths in Bath, England is both the town’s namesake and the main attraction in the city. There is archaeological evidence that the Celts used the area as a natural hot springs even before the Roman invasion. The Romans built the temple between 60-70AD and the baths you can see today were built over a period of 300 years after the original temple was built. The original baths are below the current street level, so what you see when walking around the city are dated from the 19th century.
I haven’t managed to find much about the bath complex during WW2, but over a weekend in April 1942 80 Luftwaffe flew over the city of Bath and bombed it. It is said that most people who saw them coming didn’t duck for cover thinking the planes were headed for near by Bristol. The bombing was the start of the Baedeker Blitz which was a reaction to the RAF bombing and destruction of the city of Lubeck. This resulted in 19,000 building being bombed in Bath alone, 1,100 being seriously damaged or entirely destroyed of which 218 were of architectural significance. St. Andrews church was entirely destroyed and is now a park. St. Johns was nearly destroyed but efforts to restore were completed in the 90s. The names of those lost to the bombing can be found at the War Memorial outside the gates of Victoria Park. 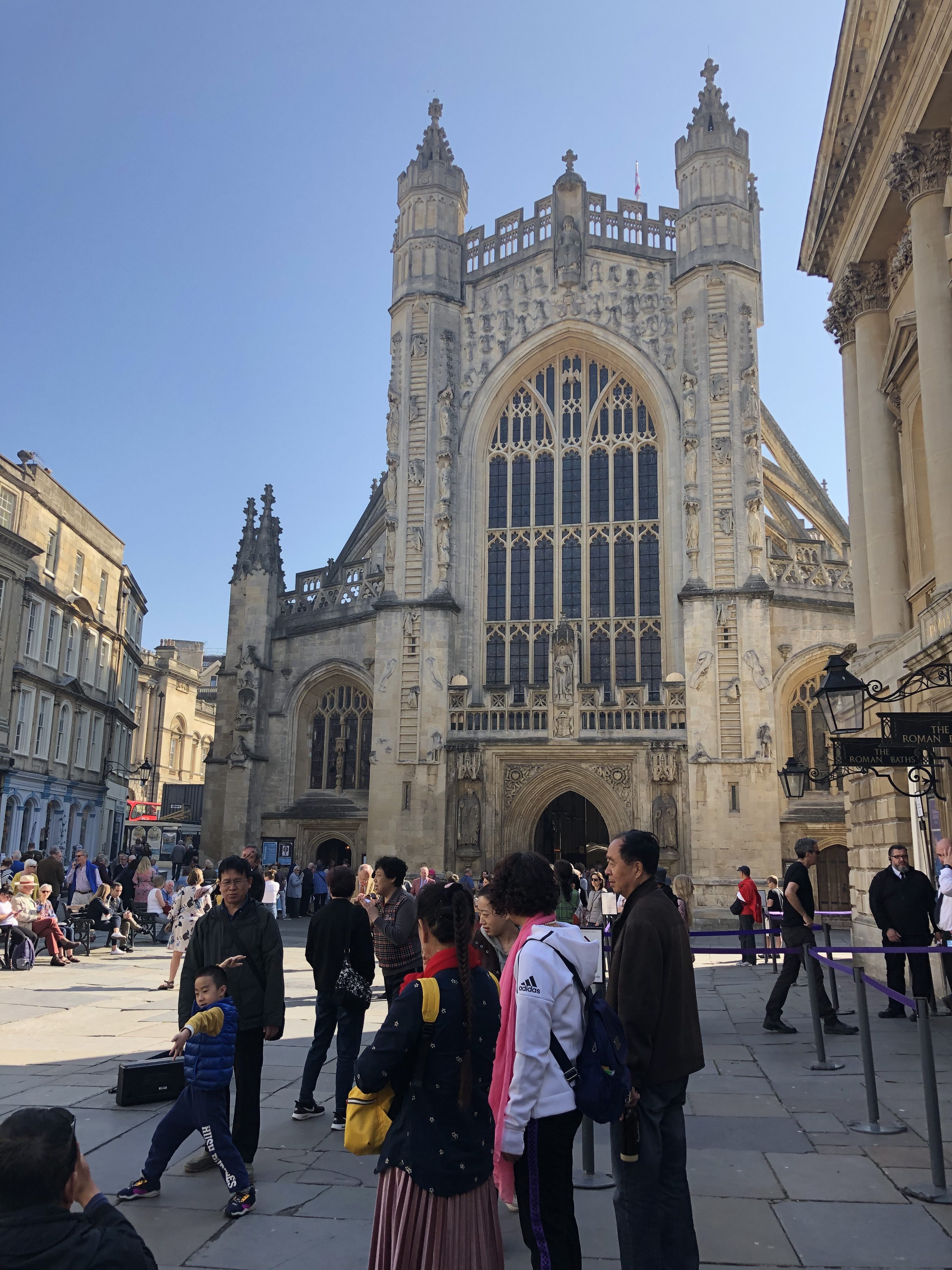 The bath complex is a open air square with the Sacred Spring, Roman Temple, Roman Bath House and museum as well as the Pump Room which is a restaurant and tea room. There is also a gift shop that exits visitors on the main pedestrian street and can be accessed by non museum goers. We didn’t visit the baths themselves. I think had we been in town longer we would have, they look quite impressive. And I love a good historic site. But even being there off season the lines to get in were wrapped around the building and we wanted to see more of the town rather than spend half the day standing in line. If you wanted to go I would try getting there early and midweek if it can be helped.
You can visit the Pump Room without visiting the rest of the buildings and the restrooms in the building are open to the public, one of the only ones I found in the city. The Pump room offers a variety of tea services, which we were considering but we wound up choosing a different location due to price and crowds. But the building is gorgeous and if you want fancy tea in a fancy building with a great view you should really go here.
The other main attraction in this area and perhaps the most obvious is Bath Abbey. Early kings built on the religious site in the 700s. The site was fought over during the Norman Conquest. It was reorganized in the 10th century, rebuilt in the 12th century, dissolved from the Catholic church by Henry the 8th and restored in the 1860s. When I visited they were digging up the floors in sections for more restoration work to improve the in floor heating from the thermal waters in the area. Rumor has it they unearthed 8,000 bodies from the church floors, it should be noted it is an entirely normal practice historically for parishioners to be buried under church floors.
The building of the Bath Abbey that stands today is known for it’s historic significance and architecture, specifically the fan vaulting on the ceiling which was designed by Robert and William Vertue. The brothers designed a number of well know buildings including a similar ceiling in Westminster Abbey for Henry the 7th. Additionally the entire church is made of a butter yellow limestone that is unique to the area, most of the city of Bath and buildings in near by towns are built with the same stone.
If visiting the church is on your bucket list be sure to plan around religious holidays and check for hours. The church is still holding regular services and tourists are only allowed in during specific touring times. Obviously you could attend a service to get in, but the lines for the services are long and you wouldn’t have the freedom to wander the building or take pictures. 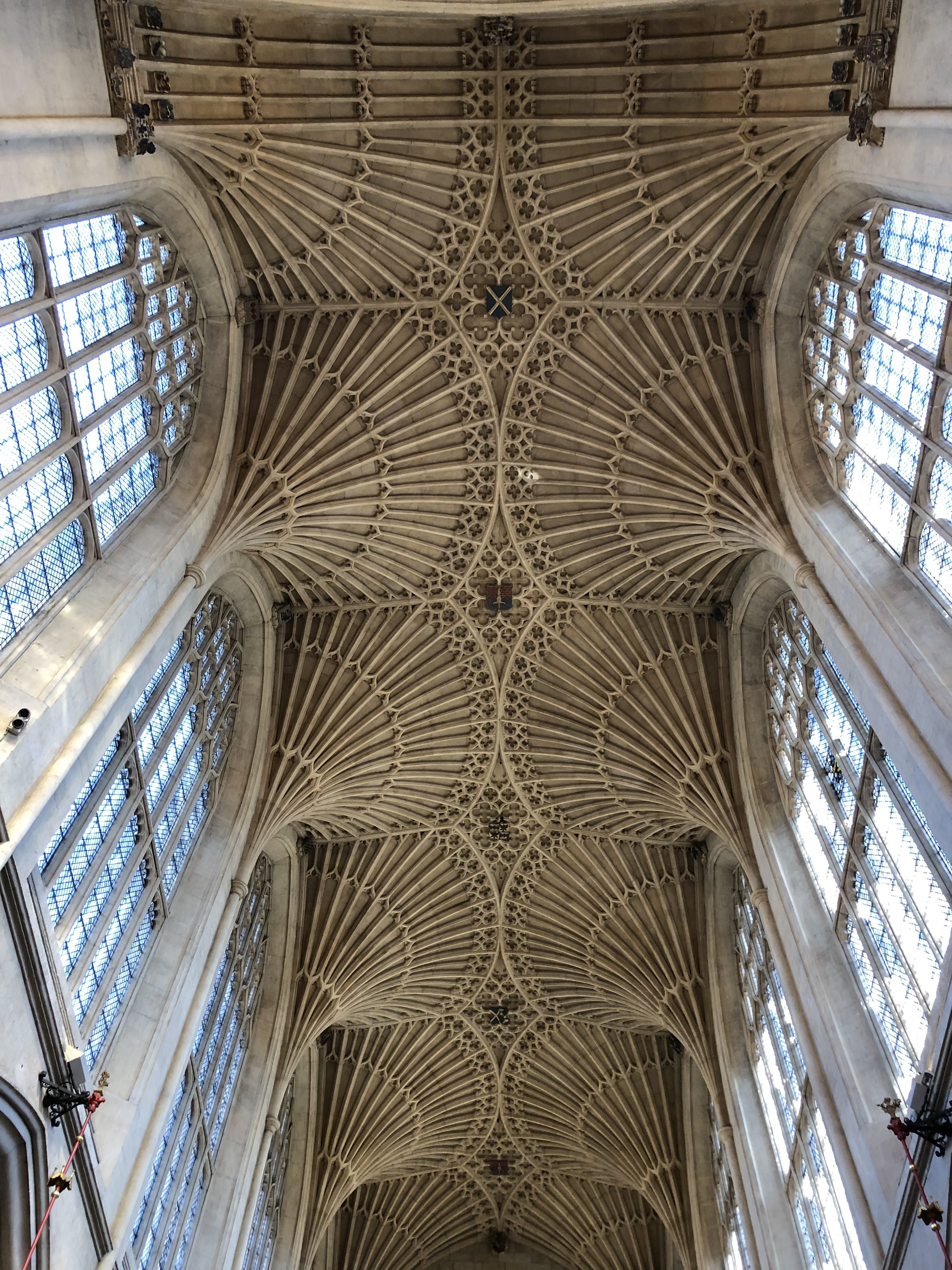 Secret Things To Do Near the Baths

Behind the Bath Abbey is the Parade Gardens a walled park on the river front. The parks were rebuilt in the 1930s on the grounds of 17th century pleasure gardens.  It costs to get in and it is cash only, but if its a nice day I would say the charge is well worth it. There are also food stands at the top of the gates before you go in so you could always buy a picnic and settle in for an afternoon rest. 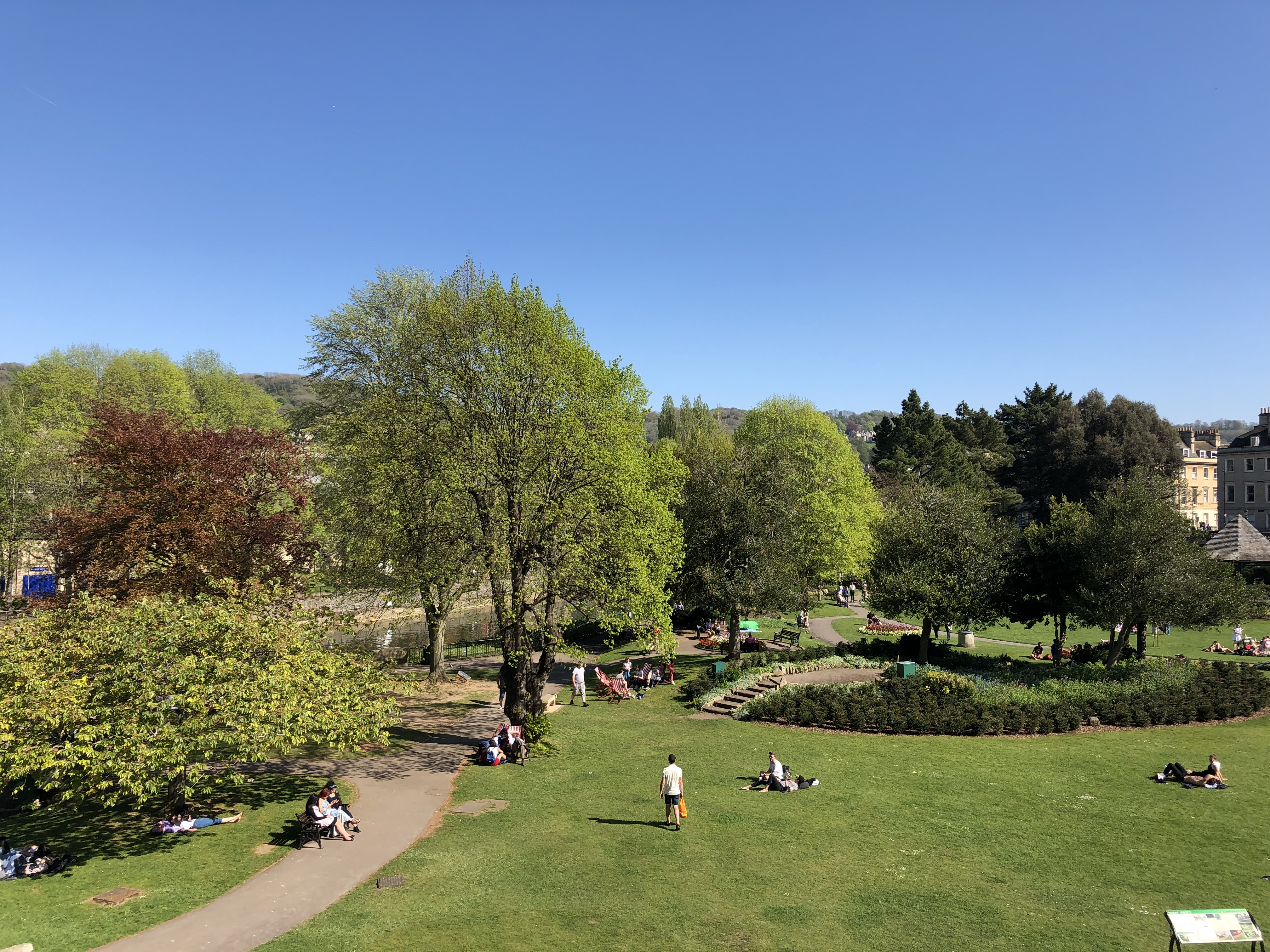 To the left of the Parade Gardens over the River Avon is the Pultney Bridge which was built in 1774. It like the bridge over the Grand Canal in Venice has shops built into it and was a very popular shopping district in its day. Though it was still pretty crowded when we were there. There are both restaurants and shops on it now, one of which a quaint little map shop selling original historic maps. If I had enough money to afford such a think I would have bought one, they were gorgeous.
If you walk over the bridge you will notice a small stairway on the right hand-side after you pass over, this stairwell goes into and under the bridge depositing you on the other-side of the river where another lovely park sits along with restaurants with outdoor seating. This stairway is significantly harder to see coming from this side of the river, which is what we did. I thought we were walking into a restaurant kitchen rather than the bridge, though it wouldn’t be the first nor the last time I have accidentally wandered into a busy not public kitchen. 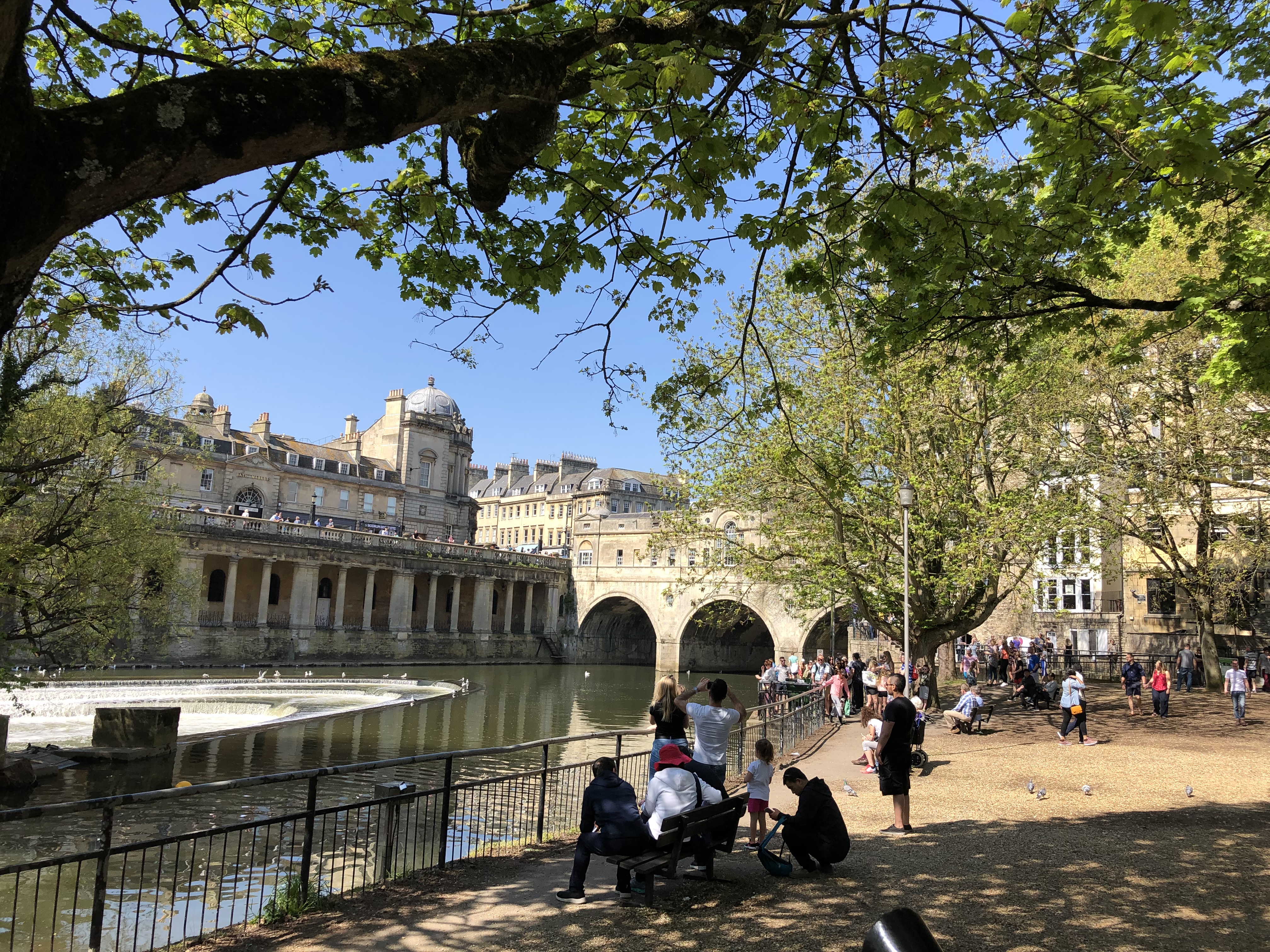 If you continue to walk away from the bridge along the river you see a wonderful view of the city that you wouldn’t get otherwise. This side of the river also hosts a small riverfront park, but rather than streets and cars there are a good number of restaurants offering outdoor seating. Continuing down river from the bridge you get an excellent view of down town Bath and a quite little restaurant on a long boat. 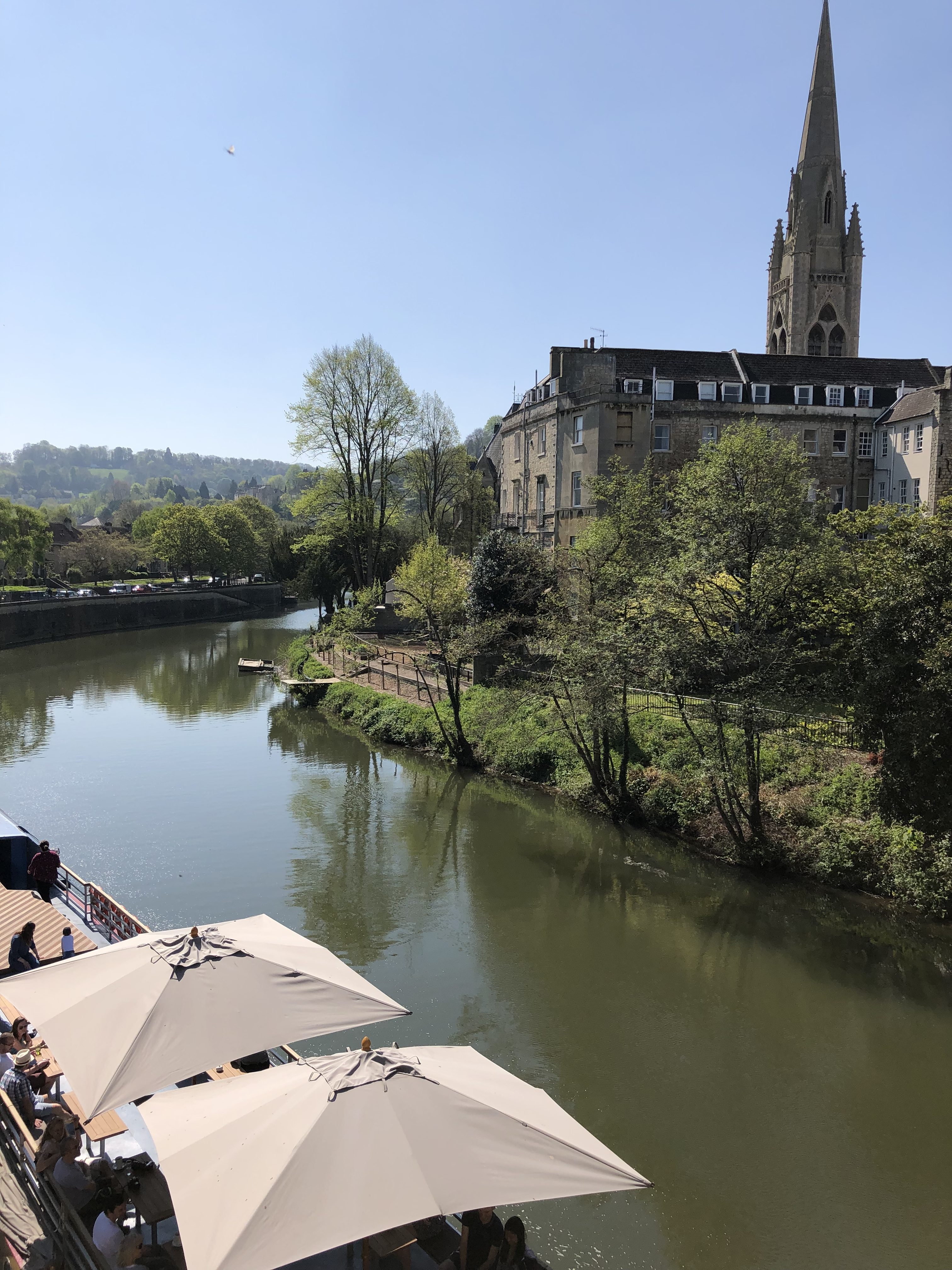 If you follow the river down to the next bridge and then turn east and wander up the hill you run into the most charming waterway and greenspace. It goes on for quite a ways in both directions but along this canal is a series of locks. I couldn’t find an exact date on the lock system. But they are a part of the larger system of locks connected to the Bristol Floating Harbor which was built in the 1800s and the Bath Locks have two bridges that date to the same time period.
They fell into disuse and then were restored in 1968 and are run today manually by volunteer labor via the Kennet and Avon Canal Trust. This was probably one of the highlights of the trip. Watching the long boats come and go, and watching them manually (when I say manually I mean two young men physically move the winches that open and close the locks) manned was very impressive. The volunteers are all very nice and were happy to answer all of our questions.
The long boats that run up and down the canals can be rented for day use or overnight. We almost stayed on one, I think it would have been a hoot, but having seen them in person there wouldn’t have been a ton of privacy sitting up here on the canal. There is also a small restaurant and ice cream stand up near the top which would make a nice little rest stop should you need it. 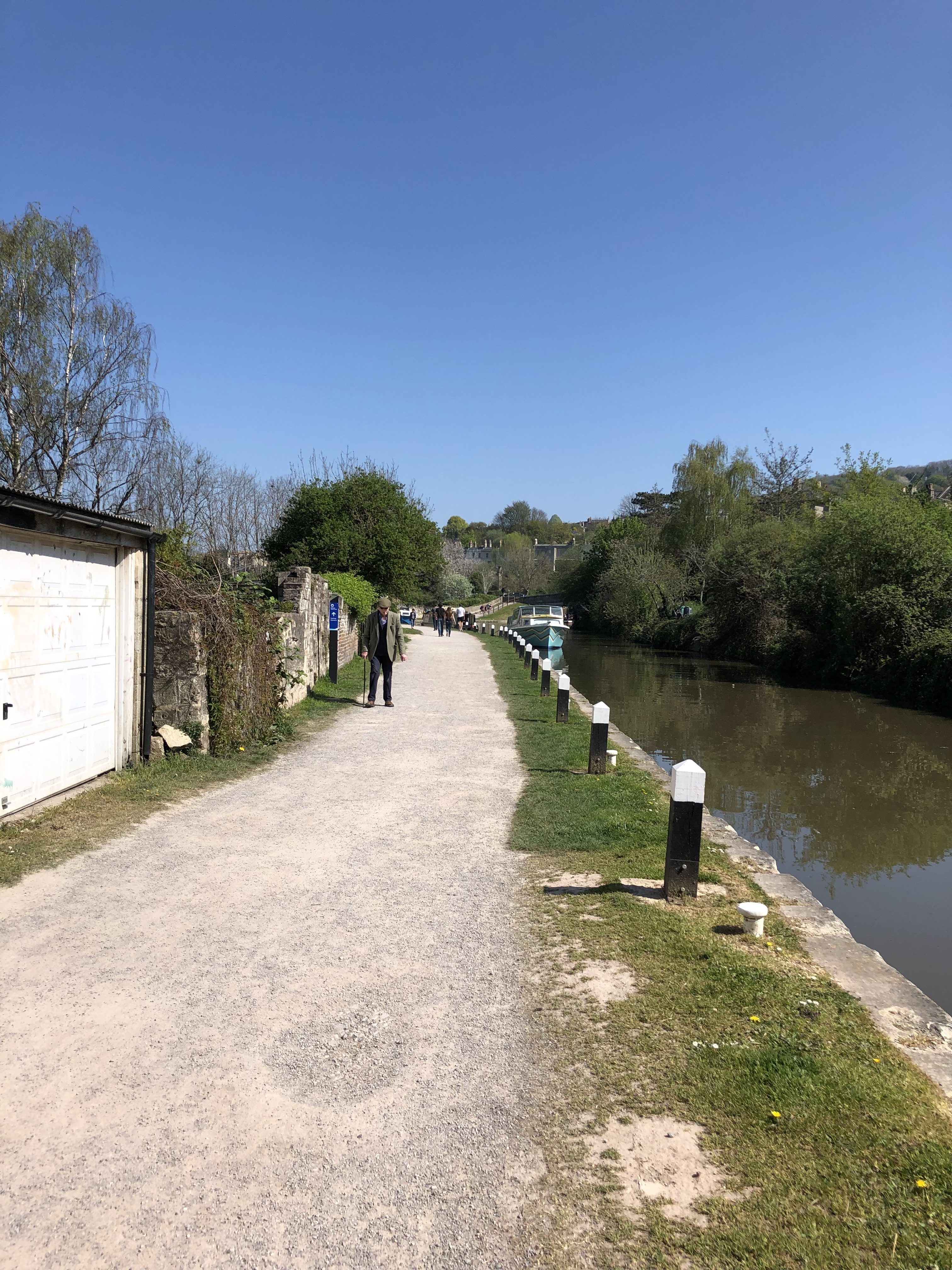 Crossing the river at the last of the locks brings you back to the Bath Train Station and right near the aforementioned St. John’s church. The church  is near the bath complex sitting along the river, in fact if you walked the opposite side of the river you probably saw the back side of it just down river from the Pulteney Bridge. It isn’t as impressive as the Bath Abbey but it is still very impressive, especially compared to modern American churches.
My favorite thing about this location was the are stations around the inside walls describing the history of the church. I don’t see this a lot and was happy to read about the history in the location rather than later after I had toured it.  This church like most in England was originally Catholic but dissolved during Henry the 8ths reign. St. Johns was also nearly destroyed during the blitz and the signs do a nice job discussing the damage and restoration efforts which were extensive. 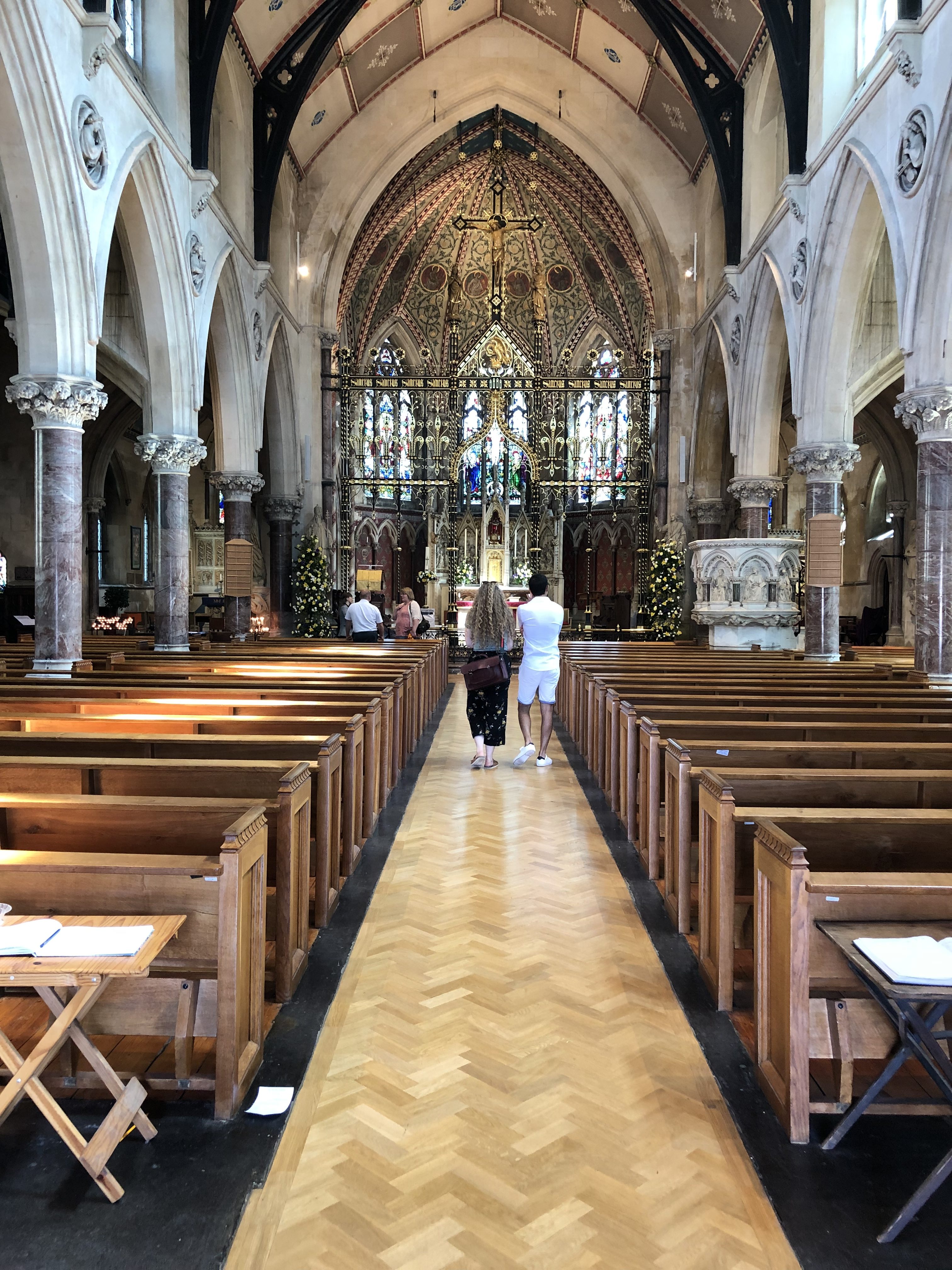