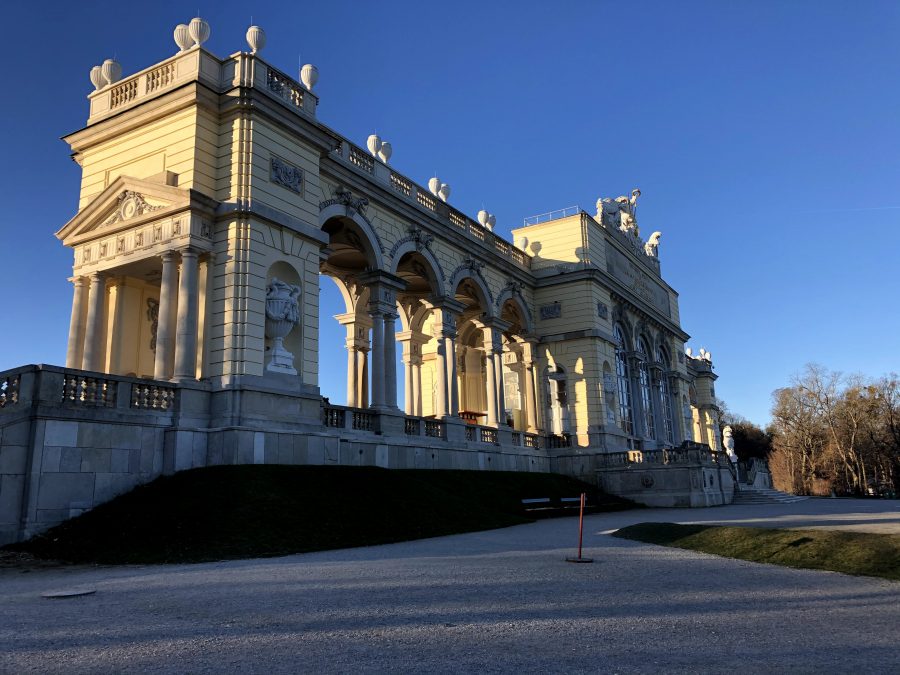 The Schönbrunn Palace Gardens are quite the experience, much like other palaces the grounds are just a series of plant stations but rather house fountains, mazes, elaborate green houses, cafes, a zoo and endless sculptures. As I mentioned in last weeks post it was quite cold the day we visited so touring was a bit frigid but we were there and were determined to have an experience as we always do. 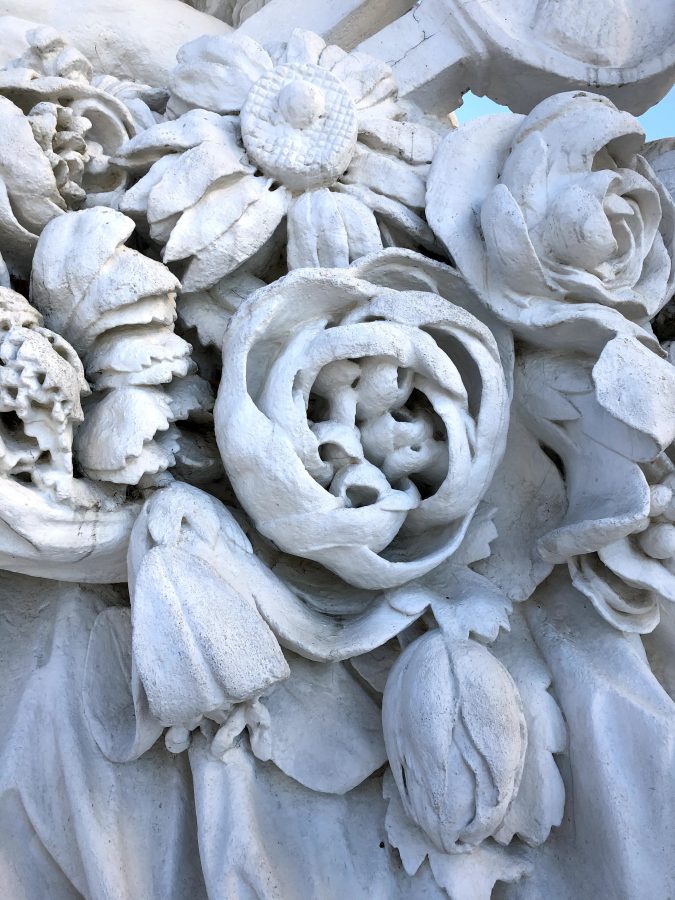 When Maximilian II bought the property for his game preserve the land was called Katterburg and belonged to the Klosterneuburg Abbey. It was a flood plane area that housed a mill, farm land and vineyard as it had done since the early middle ages. It is said that Maximilian was mainly interested in the property for a game preserve in order to house and breed native game. Rudolph II inherited the land when Maximilian passed away, though he did little to the land other than ensure it didn’t fall to disrepair.  His successors Ferdinand II and Eleonora Von Gonzaga were avid hunters  and frequently hosted elaborate hunting parties on the grounds. And later became Eleonra’s dowager house when Ferdinand died. In 1642 she had a château de plaisance build on the land and official renamed the area Schönbrunn. In 1683 the house and property was taken by the Turkish army during the siege of Vienna. In 1686 the estate was back in the hands of the Hapsburg family who took to creating the first palace on the land, which was of course expanded by Maria Theresa to the structure seen today. 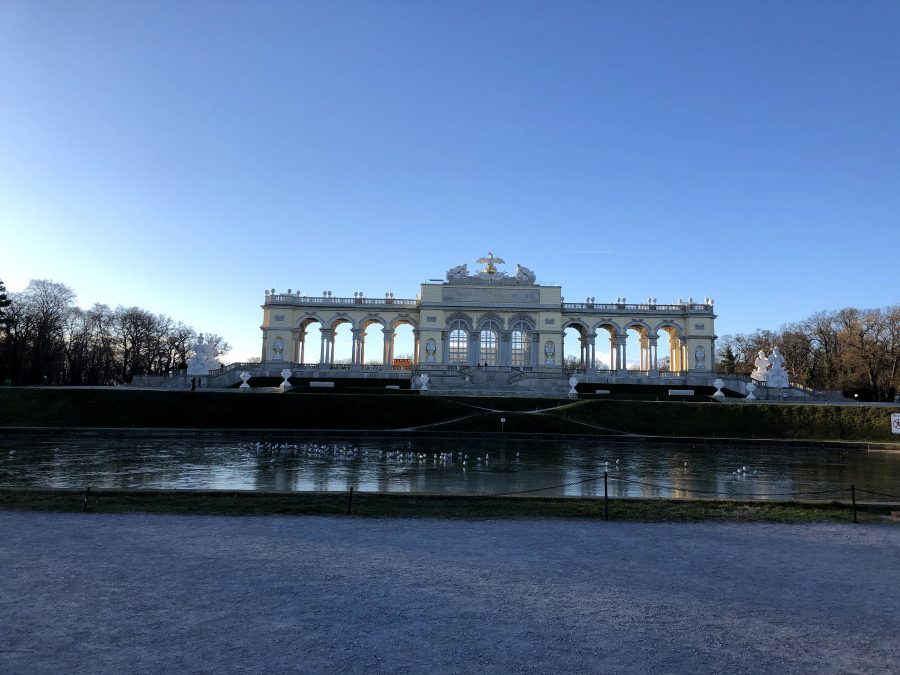 The majority of the grounds were designed under the direction of Maria Theresa such as the Neptune Fountain, The Gloriette (which is cafe now), a hedge maze which I got lost in many years ago on a different visit, The Columbary which serves as a doves house. There are also several green houses, an orangery, a zoo (which I have yet to have time to visit), a gasthaus and endless manicured gardens completed with statues.

Today the grounds are open to the public for free during daylight hours or for those of us unable to visit in person at the moment can visit online via the official website. Or can be explored via googlemaps thanks to the endless tourists pictures posted. After we completed our interior tour we wandered around the Great Parterre and the Neptune Fountain on the way up to the Gloriette. We were hungry and knew that they were serving breakfast. 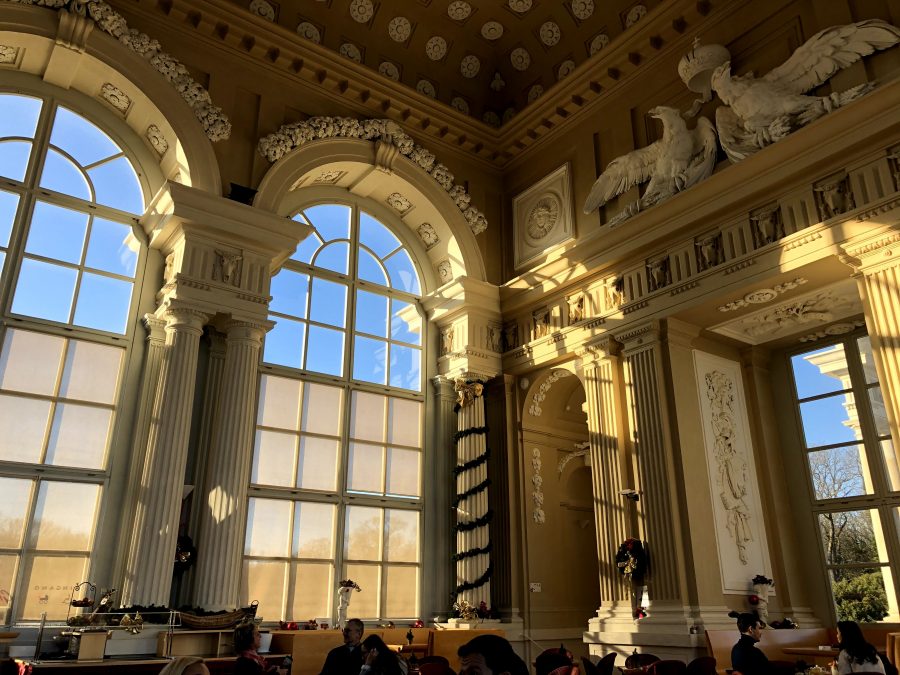 Food experiences are almost always my favorite when traveling and this one did not disappoint, the interior of the Gloriette is incredible and the food quite delicious. I spent a good long time trying to decide exactly how much meat, cheese and bread I could consume along with a bottomless pot of coffee while taking in the views. The attempted to read a German language newspaper because I saw some articles about Salzburg. Spoiler alert, I did not glean much as my German is not great. 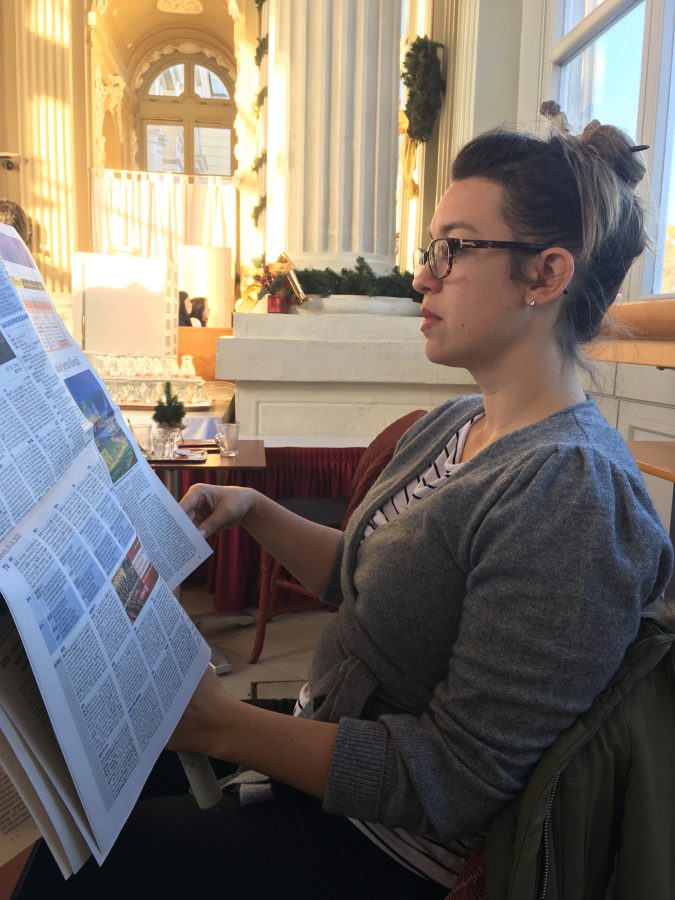 After breakfast our wander continued down toward the Palm House and Botanical Gardens, the zoo was closed for the holiday but the walk does allow you to see some parts of it. My family is very big on giant green houses, so most of the rest of the morning was spent wandering around the Palm House which is on the location of the former Dutch Botanical gardens was built in 1881 and looks remarkably similar to those at Kew but were not built by the same man. They were however built in a similar style about 40 years apart.

After leaving the Palm House we started our long trek back to the underground station but through the gardens, we wound up spending an inordinate amount of time watching ducks try to land on the frozen ponds in the gardens and skate across them. I honestly think they were doing it for fun, it sure looked like fun. A lot of people were still out and about for their daily jogs and many local families were just there for an afternoon in the sun, even if it was quite cold. 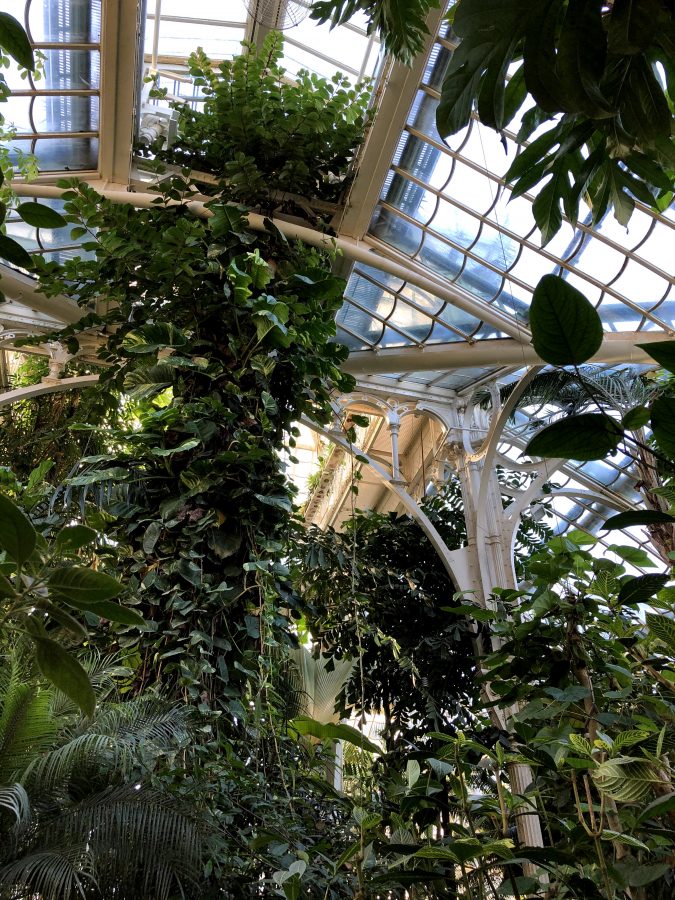 If the grounds are what you are really in for when touring I would highly suggest visiting in spring or fall. While the summer is quite nice when we were there last it is very hot and crowded and obviously in the winter many things are closed. Regardless a visit at The Schönbrunn Palace Gardens is always worth it.