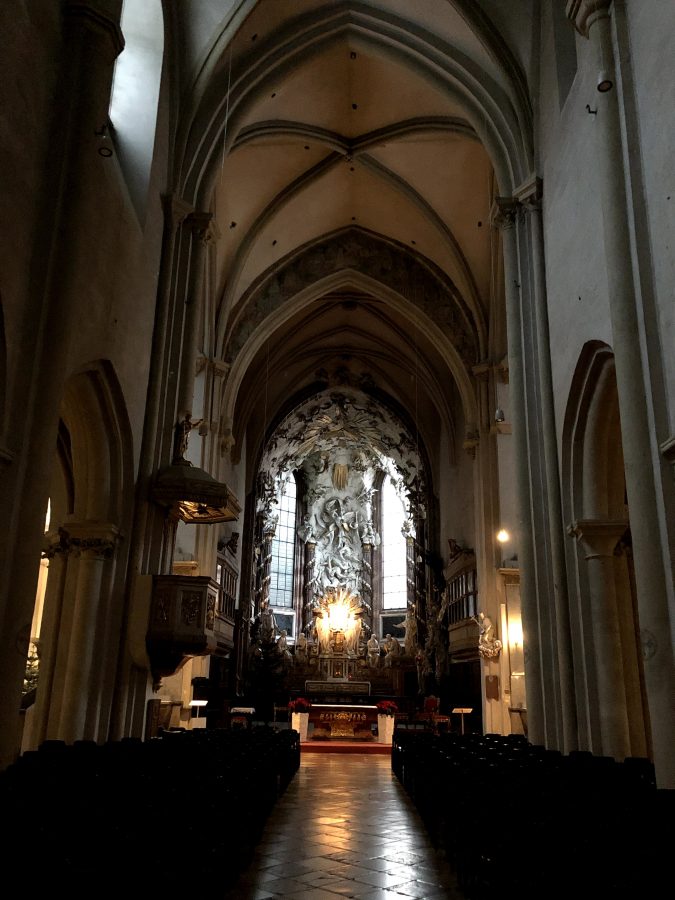 This is my round up of the ten most unique churches in Vienna.  In reality I am sure there are many more than these specific 10 but these are the ones that  I had on my list in/near the first district where we were staying. Of the 10 I am going to cover here I sadly did not get to visit all of them due to hours and time constraints. But they were all on my list, which means I researched them so now I am going to tell you all about them. 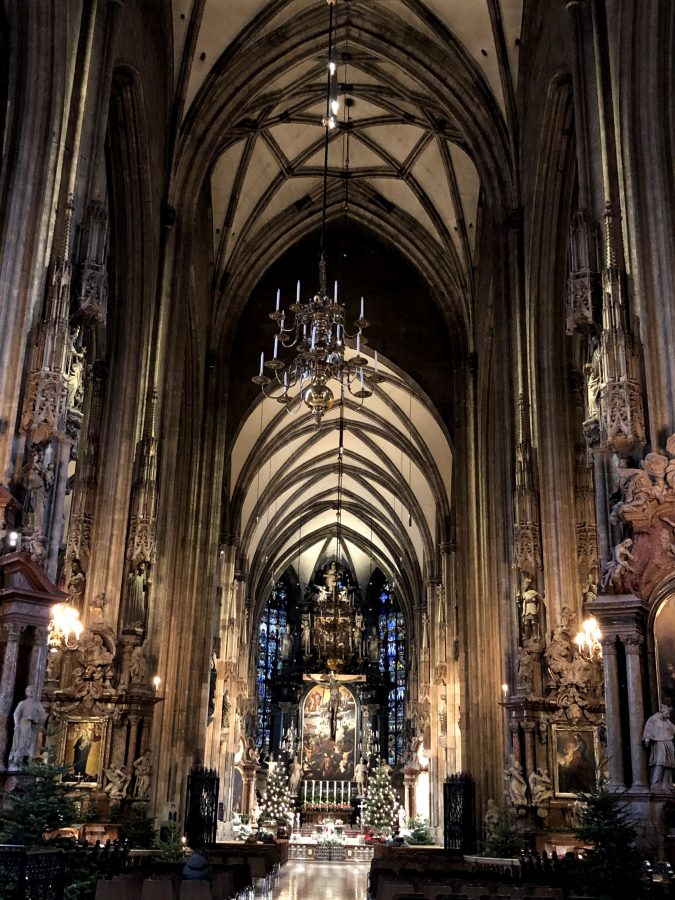 First on my list of ten most unique churches in Vienna is St. Stephen’s Cathedral. St. Stephen’s is the seat of the Roman Catholic Archdioceses in Vienna. The building seen today is build mostly in the Gothic style, but the church itself stands on the ruins of two earlier churches. As seen today the structure is  mostly the influence of Duke Rudolf IV which was completed in 1160. Like many churches this old it has seen fires, wars, renovations and reconstructions. Things like the original stairs were destroyed during WWII, however the church as a whole was saved due to German troops intentionally ignoring commanding officers instructions to level it before the invading Russian Army made its way into the city. It is also said that during the time of the ongoing Turkish invasion the catacombs were monitored for ground movement, evidently an invasion was staved off by a young man who noticed vibrations underground of the incoming army. The church today is one of the most popular tourists destinations, its towers provide incredible views of the city and the the uniquely tiled roofs are known world wide. 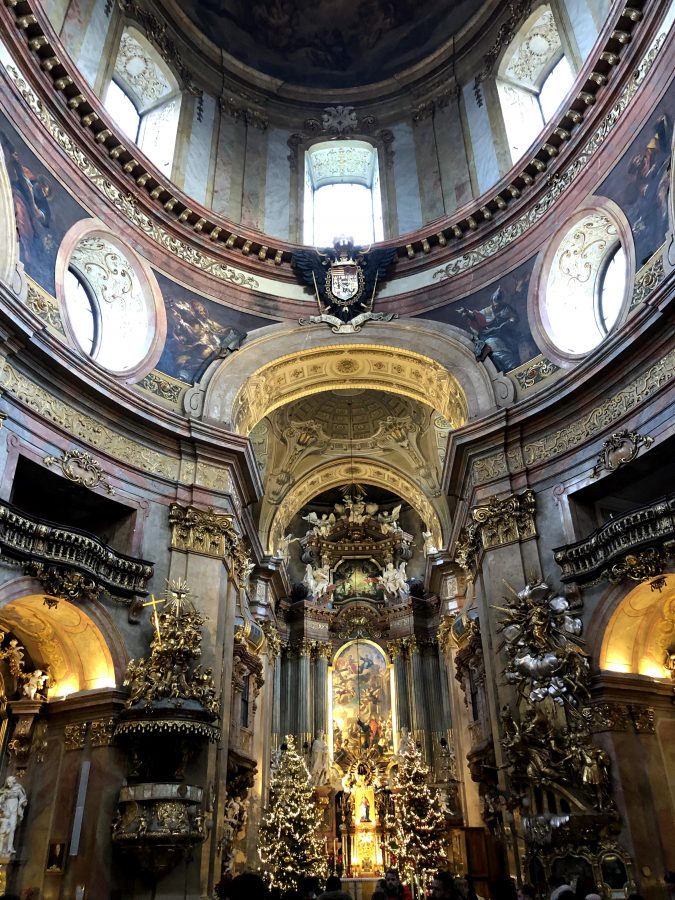 Second in line is St. Peter’s Catholic Church which is a contender for the oldest church in Vienna. However the building seen today was finished in 1733, making the structure that can be toured not that old at all considering the age of St. Peters mentioned below. It’s predecessor was burned to the ground in 1661 and Leopold I commissioned the new church after the city was decimated by the plague. It is an astonishingly beautiful example of Baroque interiors, floor to ceiling paintings and gilt finishing, the builder having taken inspiration from St. Peters in Rome. But the most unique thing about the church is that due to the area in which it was built, an already very crowded city, the floor plan rather than being the traditional cross shaped structure is uniquely oval. 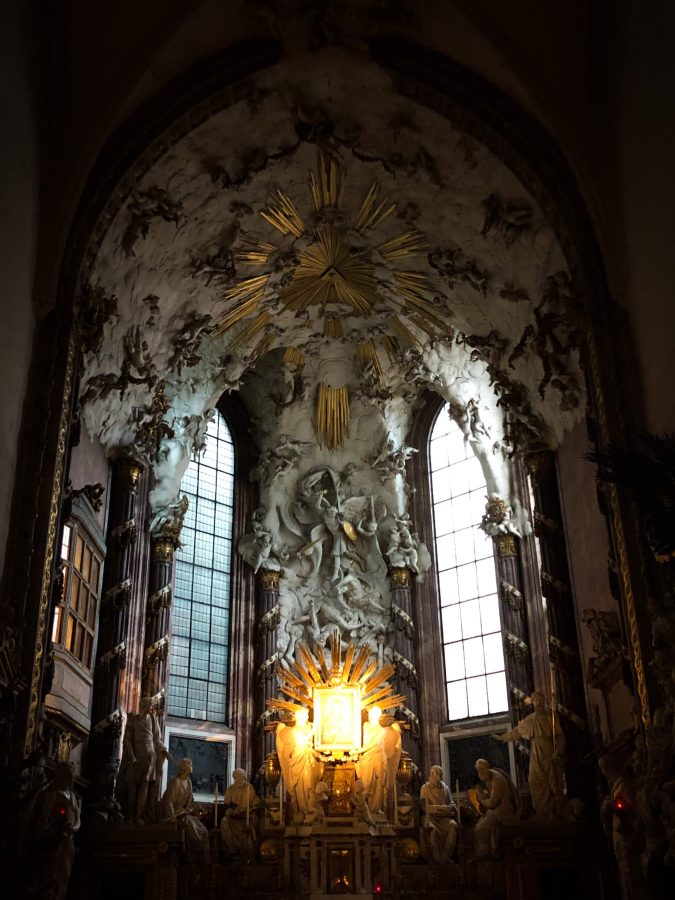 My personal favorite of the ten most unique churches in Vienna is Michaelskirche. The Church of St. Michael is located near the Hofburg as an unassuming Romanesque structure. In fact I walked by it several times assuming it wasn’t the church I was looking for. But I found it luckily on a very quiet morning before the crowds woke up so that I could view the Rococo alter sculpture ‘Fall of the Angles’ by Karl Georg Merville which was installed in 1782. The sculpture was what I came for and I was so glad to find it empty except for the very kind cleaning lady who was mopping the floors, otherwise I doubt I would have gotten so close to the alter piece. Like many churches in the area it was build on the foundations of much older churches, the structure seen today is unchanged (other than upkeep) since 1792 but the tombs below which date back to the 1200s have thousands of perfectly mummified human remains due to unique conditions of the area which can be viewed on tour. 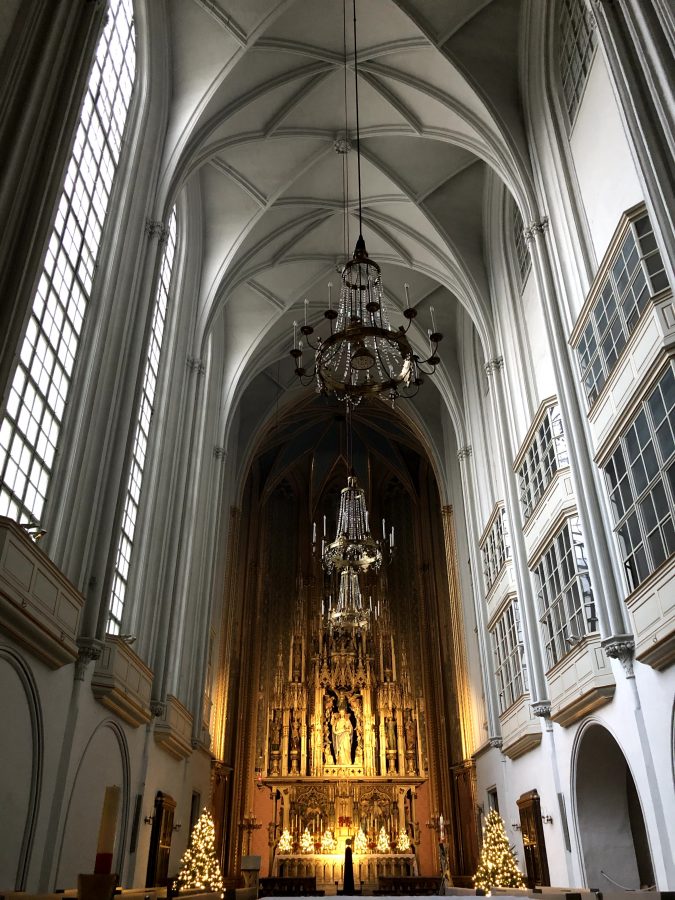 Literally right next door to The Church of St. Michael is the Augustinian Church which was the imperial church of Vienna. The relatively plain Gothic structure was built in 1339 with towering ceilings decorated only by the elaborate chandlers  has hosted the majority of the Hapsburg family weddings since its inception.  While the church does seem plain in comparison to others I found it very calming, partly because it didn’t have the same crush of tourists as many other more ornate buildings did. We sat for a bit taking it in and then took a look at the nativity scenes that had been set up for the holidays, one of which had an alarmingly large baby Jesus considering the size of his parents. A fact which struck us all as quite funny so we had to remove ourselves from the very echoing and quiet building before we got shushed. 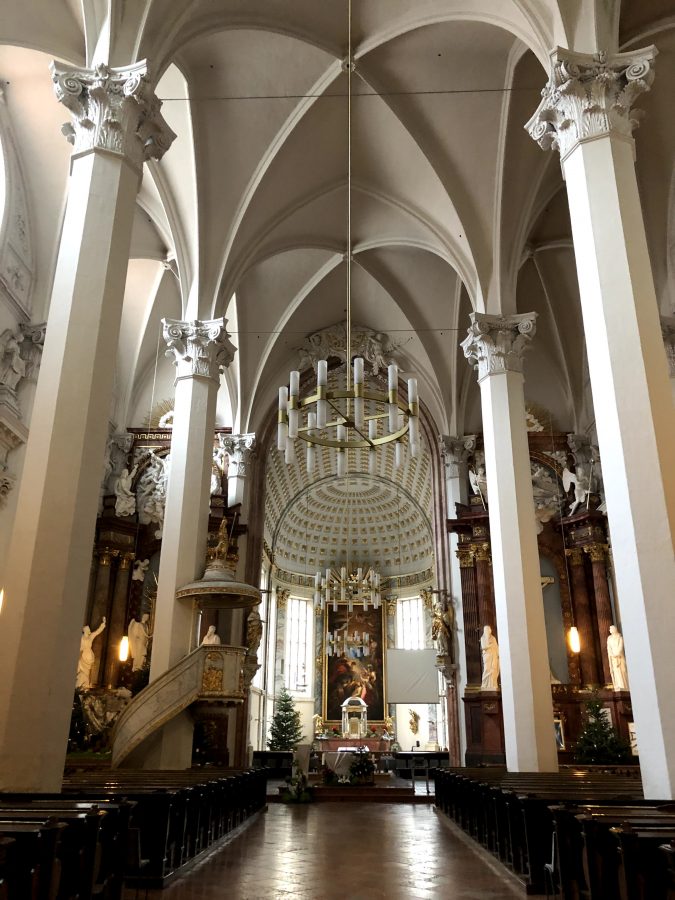 The last of the churches that we got to enter was Kirche am Hof an extremely large church that backed up to the street we walked down daily. We never did figure out what room the odd little obtrusion was that we were so curious about each day but we did manage to sneak into the building once again with zero tourists. The church itself is huge, and fairly typical for the area. Beautiful but not overtly unique in appearance. However the facade in no way matches the interior it was built between 1386 and 1403 by the Carmelite Order in the Gothic style, but the exterior was completely rebuilt by Eleonore von Gonzaga (who also had the first palace on the site of Schonnebrunne built) in 1662 in the Baroque style. In 1773 it was a turned over and functioned as a military church but today it serves the Croation community in Vienna. 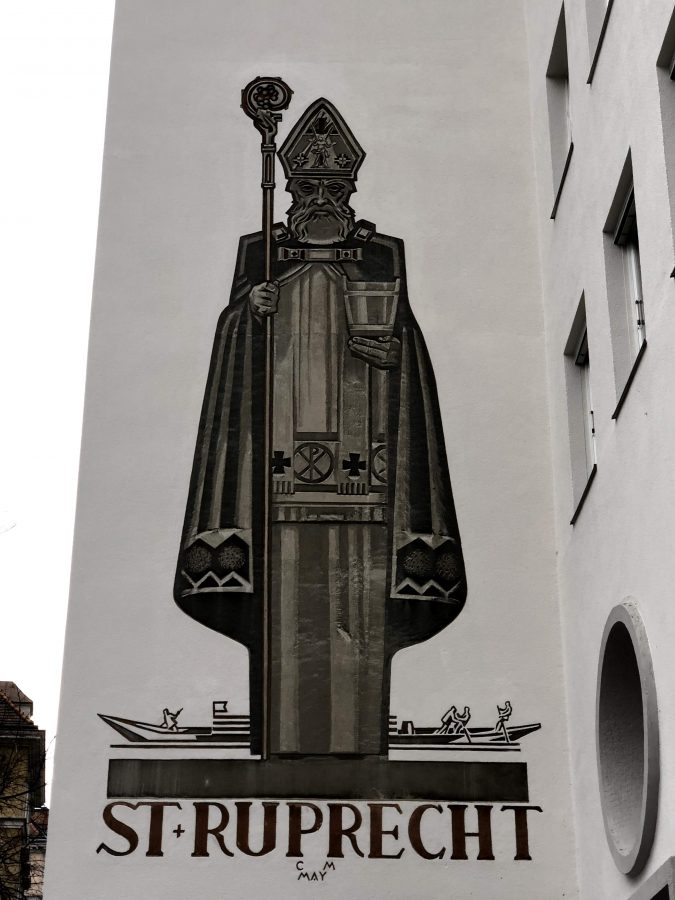 The oldest (by my definition) of the ten most unique churches in Vienna is St. Rupert’s Church. It was the closest to where we were staying and on the path of quite a few other locations so we walked by it quite a bit during the two weeks we were in the city. I didn’t know about this church before we departed for our trip. It was found by happenstance while out walking and then researched as it is such a unique structure to other churches in the area. It stands out architecturally as it is often considered the oldest church in the city, though that has recently come under debate as some bits of foundations under both St. Stephen’s and St. Peter’s have been dated prior to items found within St. Ruperts. Despite the debate the church is thought to have been completed in 740, it was built in the Romanesque style and is located in the oldest part of the city known as the Roman Vindobona. It played a role as the religious center of the city until 1147 when that title was moved to St. Stephen’s and it was also the ‘Salt Office’ during the middle ages. Salt was a very lucrative and important commodity in the area at the time, more on that when I cover Salzburg. 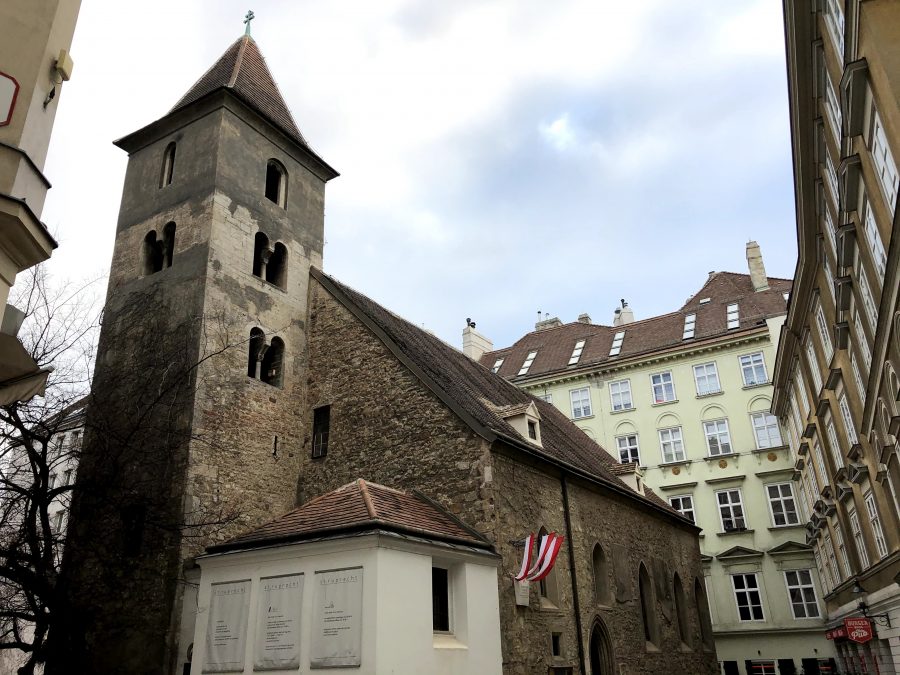 Another church I very much wanted to visit was the Votivkirche but it had very limited visiting hours so we didn’t get to see the interiors. The church was dedicated in 1879 on the silver jubilee of Emperor Franz Josef and his wife Sisi. An 1853 assassination attempt on Franz Josef by Hungarian nationalist János Libényi prompted the building of the church as a dedication to God for saving the emperors life. The kings brother Ferdinand Maxamillion started the campaign to raise funds across the empire for the church which was eventually built in the Neo-Gothic style by Heinrich von Ferstel a 26 year old architect who was chosen by a committee out of hundreds of applications. 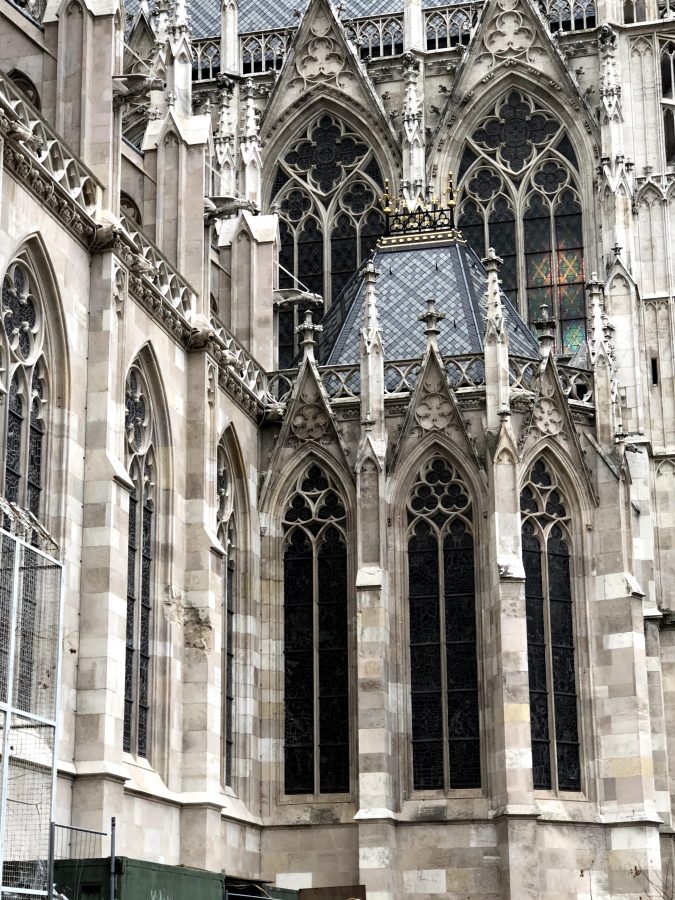 Eighth on the list of ten most unique churches in Vienna is Schottenkirche, which translates into English as Scotts Church. Christianity was mainly spread throughout Europe during the middle ages by English, Scottish and Irish pilgrims. The most significant to Austria is Saint Koloman an Irish Monk who was killed in 1012. The original Schottenkirche was founded by Scotts-Benadictine monks in the 12th century, however quite a bit of the building was destroyed by fire in 1276, an earthquake in 1443 which resulted in a shoddy roof repair that collapsed in 1634. As well as lightening strike that collapsed the tower in 1638. At which time the entire building was rebuilt in the Baroque style and fully restored after the Turkish Siege. 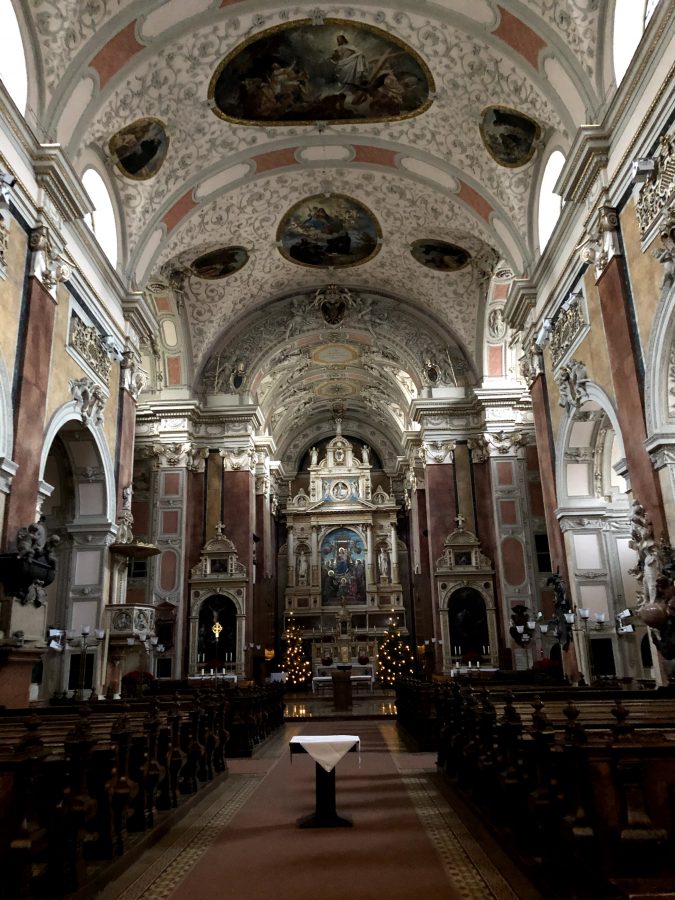 Another church I very much wanted to visit but didn’t end up having the time for was the Holy Trinity Greek Orthodox Church. The church is unique in that it is built in two tone brick with gilt archways in the Byzantine Revival style by Danish architect Theophil Hansen, which is a re-design of the original church built in 1787.  The church was allowed to be built and exist due to the Patent of Toleration issued in 1781 by Joseph II allowing religious freedom to no Catholic Christians in the Austrian Empire. 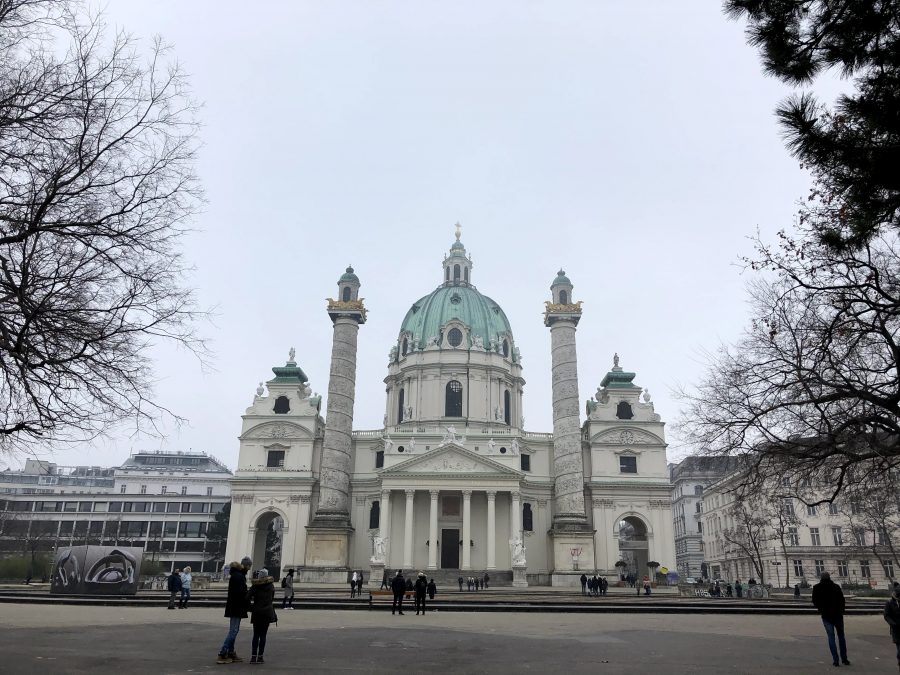 The last church on the ten most unique churches in Vienna is Karlskirche one would be remiss to not mentioned St. Charles Church. The church much like St. Peters was built as a dedication to the plague though this one was the last plague having ended in 1712. A year after the plague ended  Charles VI, Holy Roman Emperor pledged to build a church in the name of Charles Borromeo, patron saint of plague suffers. The church took 21 years to build and is often said to be one of the most beautiful Baroque church in Vienna. It is also quite possibly the biggest. We went with every intention of touring but it was toward the end of the trip and it was going to be a several hour wait to even get in. So rather than touring we wandered around the rather large grounds and took pictures in the fog. Soaking up the last bit of our time in Vienna before we flew home the next day, which brings us to the conclusion of the ten most unique churches in Vienna, in my opinion given the time constraints I was dealing with.