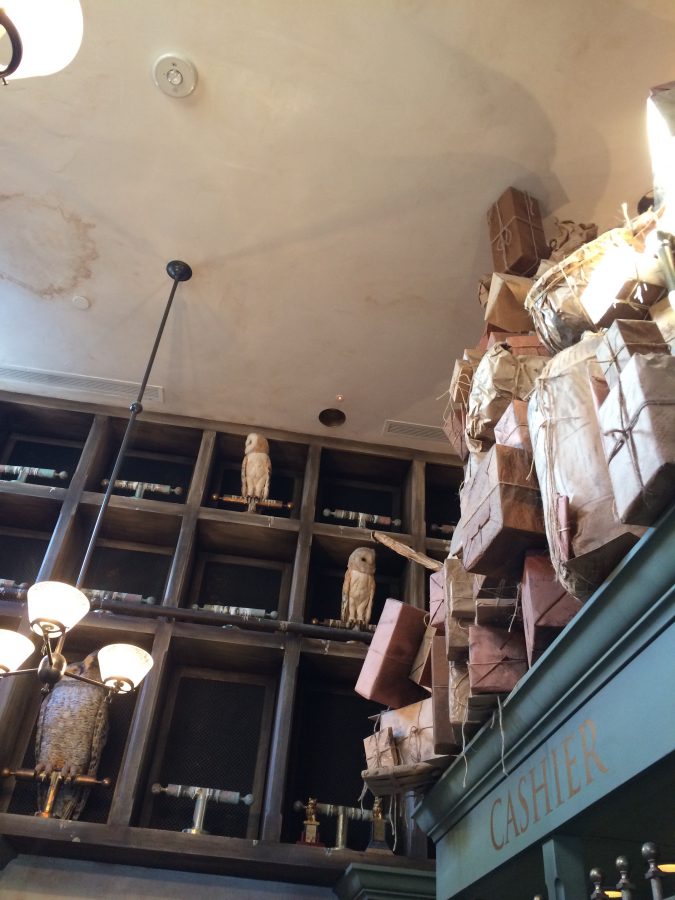 I feel like it isn’t much of a confession to say that as an adult I am totally obsessed with all thing Harry Potter. It is certainly not a rare affliction these days. I had been wanting to visit the Orlando park since the second the build was announced, but living all the way out on west coast paired with a deep seeded need to see literally everything in the world caused it to be bumped down on the list more than once. 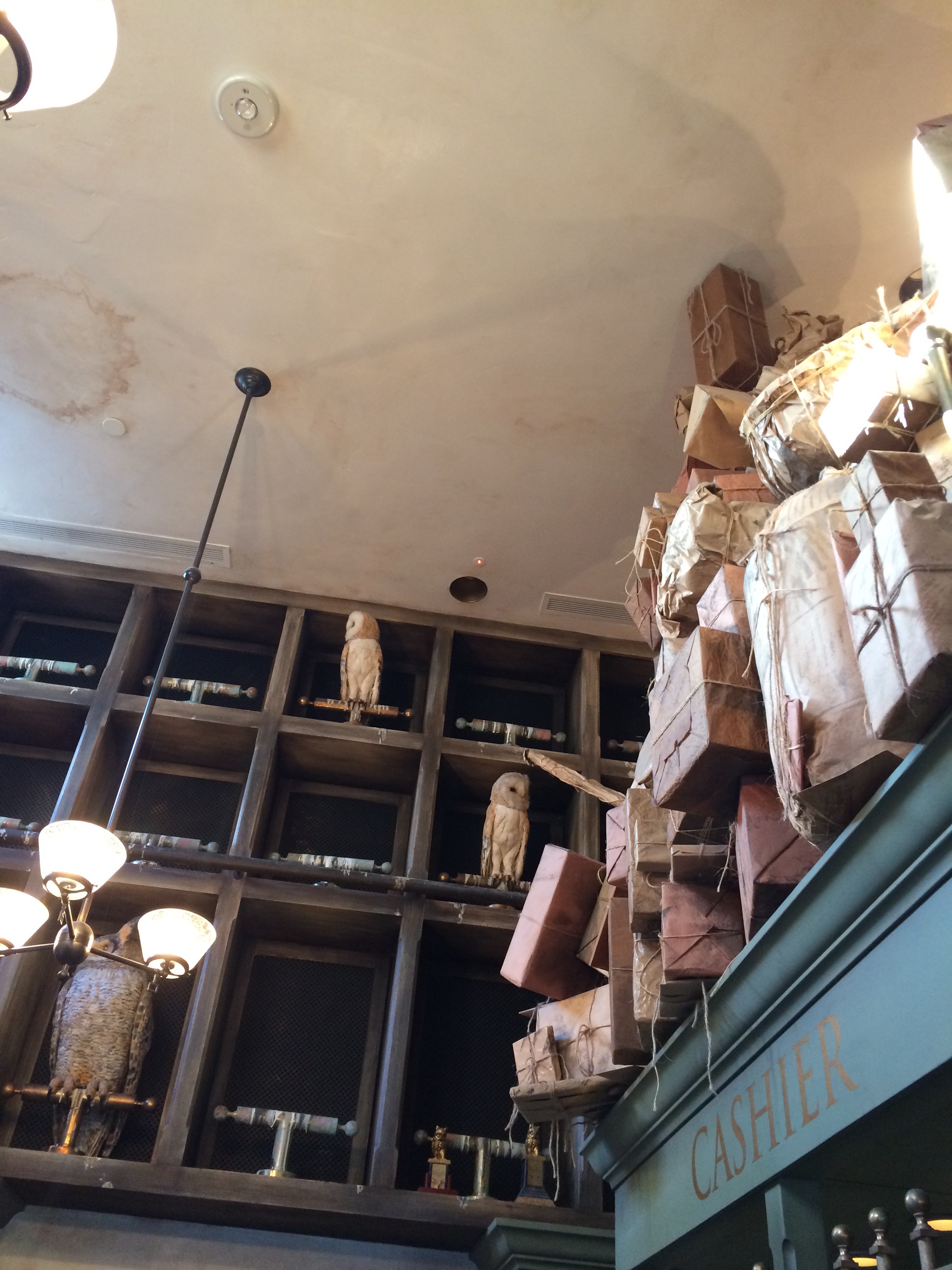 But then Universal Studios Hollywood made an addition to their park (yes addition, see the Universal Studios post for information) and then I waited a year. I waited a year on purpose because while I love all things Harry Potter, I love pushy frantic people a lot less. I very purposefully waited until the park addition wasn’t the hottest thing on the West Coast and then I slipped in for the weekend to FINALLY experience it for myself. It did not disappoint.

One of the things that has always made me more loyal to Disney than other amusement parks is their ability to transform a dusty strip of land into a whole new place full of charm, and character. It is quite frankly magical. I know it is all fake, façades, false front, forced scale building to appear taller, miniatures and faux landscaping. But I love it all the same. Universal Studios in my opinion anyway, for the first time, managed to capture this in the creation of The Wizarding World of Harry Potter.
It was flawless, from the cobble stone streets, the crooked buildings to the music and smells pumped into the air. However the most magical thing I think was the wands.  For a not so low price you can pick your wand and then walk around to all the windows in the village and perform “magic”. Done I am assuming through some remote connection between specific wands and window displays (it doesn’t work with a pen or lip balm tube I tried). A brilliant business move while also being one of the sweetest things to watch as delighted kiddos all dressed up as witches and wizards zoomed around the park feeling like they too are magical.
There quite frankly isn’t a lot to do in this section of the park, though I think we spent most of our time there all the same. It felt calmer, they had better food vendors, the shops were less intrusive (lower lights, calmer music, more continuity in the trinkets being sold) plus this being a dead ended portion of the park there wasn’t as much through traffic so there were more places to sit and catch a break from all the crowds. 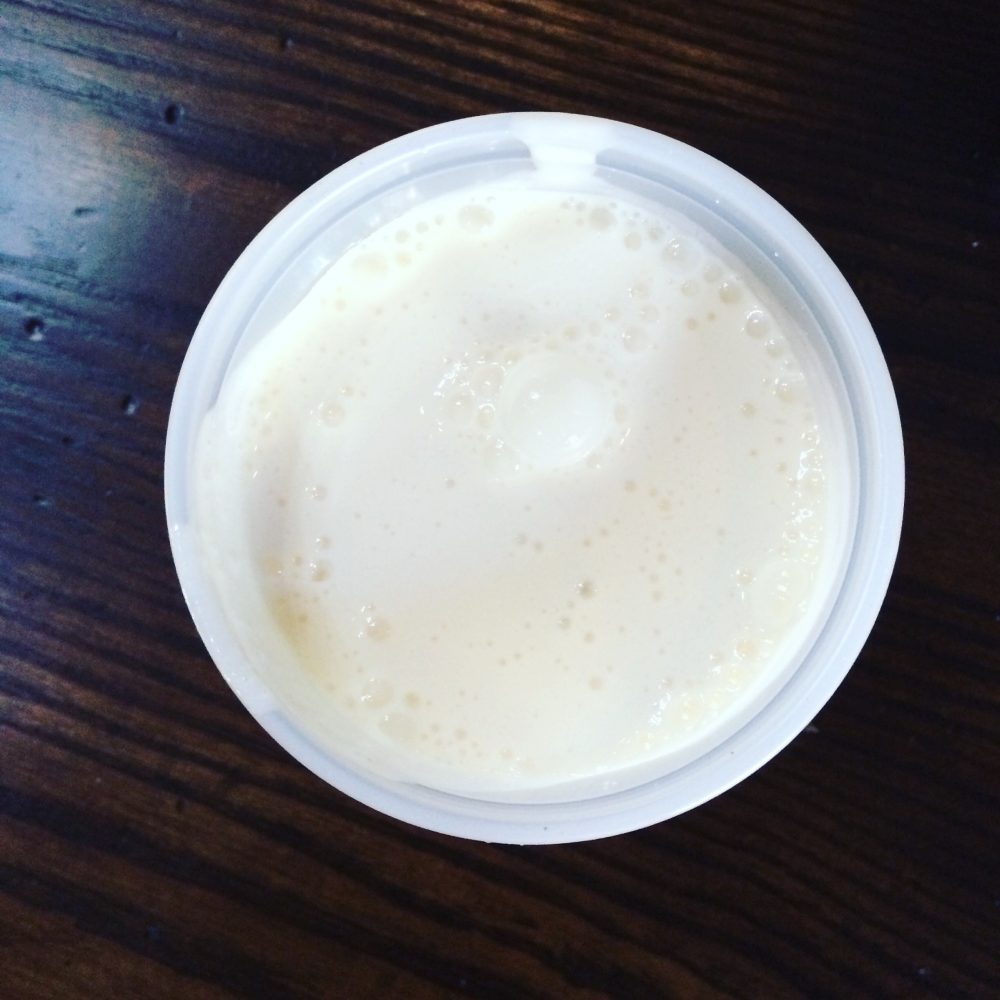 In The Wizarding World of Harry Potter there are two rides, one interactive show, several performances, two staged photo opportunities and of course the wands. As well as a restaurant, several outdoor vendors, two souvenir shops, a candy store and a joke shop. We made a point to do everything in the park and while I loved it all I stand by my earlier statement that the best thing to do is just wander around and take it all in.
The two rides were on the opposite end of the spectrum one being the small kiddie-coaster “The Flight of the Hippogriff” which is a lot of fun but really mellow and quick. We only rode it when there was no line since it goes by so quickly. The other “Harry Potter and the Forbidden Journey” is quite the ride. It was the first thing we did on our first day, and it was a blast. But then we turned back through the line and road it a second time and that was all I could take. For some reason the motion simulated rides (those with small motion made more intense by projecting rapid motion on a screen or a 3D screen) make me a tad ill. I can drop several floors on the Tower of Terror or scream through a huge coaster but get me on one of those simulators and I nearly puke. 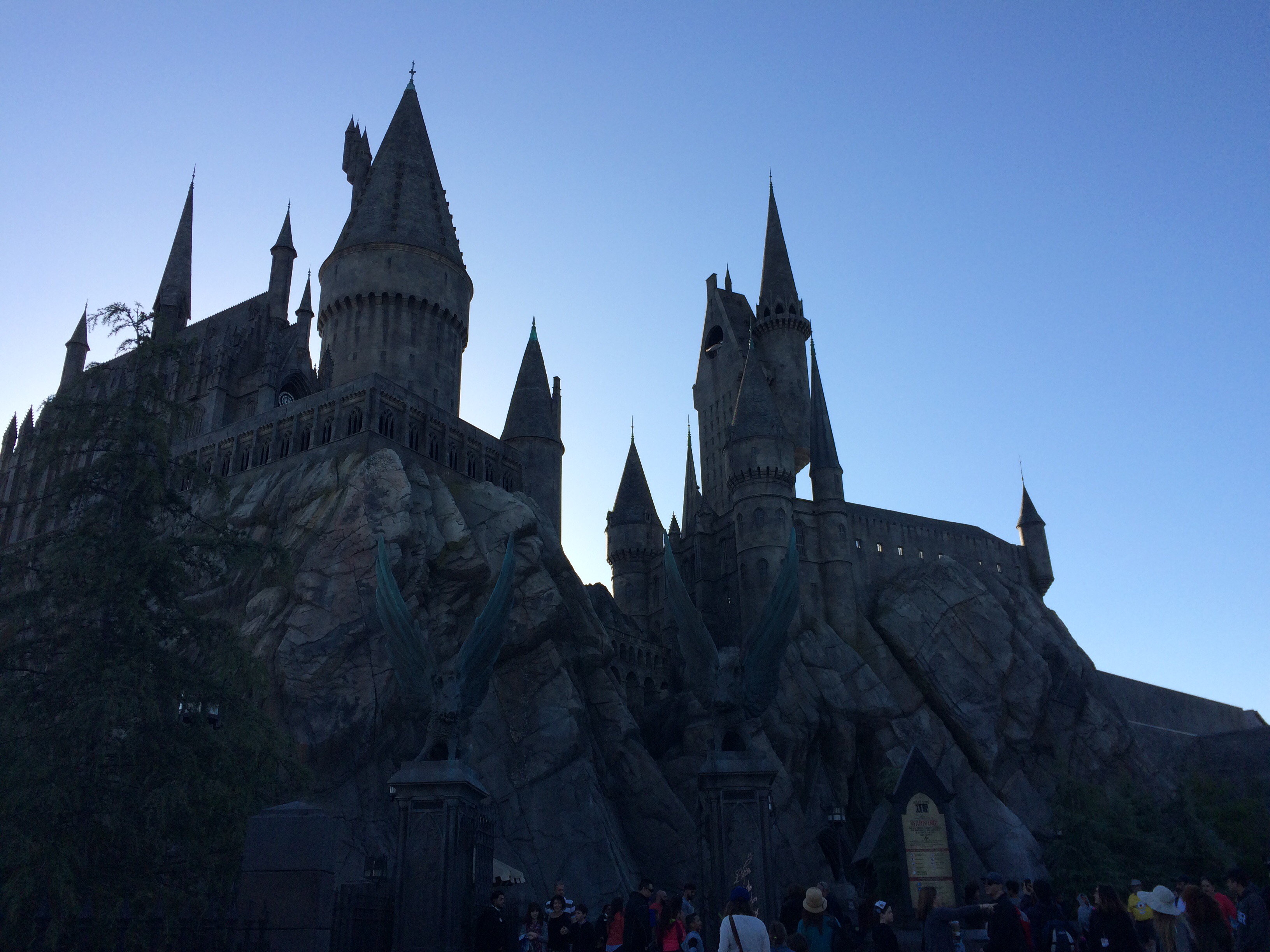 I loved the ride and I wanted to go again but since almost all the rides at universal are the simulator type I was feeling a tad green by the end of the trip and just couldn’t stomach it. But it is clearly incredibly popular the line time was an hour plus the whole trip.
The other major draw to the park is the Butterbeer, going in I was convinced I wouldn’t like it and nearly skipped out on trying it. Try it, you will love it. I did a little research after finally giving in and it turns out it is the number one customer satisfier at the parks. That’s not to say the parks aren’t impressive, it IS to say the Butterbeer is that good. It tastes a bit like butterscotch and I don’t quite know what else. It is vegan, gluten free and is also free of corn syrup. All requirements allegedly from J.K Rolling herself to ensure that the maximum number of guests could enjoy it. It is pretty expensive and the serving at the street vendors are HUGE. Which is super if you know you like it, but if you are like me and slightly hesitant I would suggest getting it with your breakfast at The Three Broomsticks. We ate there both days as they offered hearty options and a drink of your choice with your meal, which includes Butterbeer (either frozen or non frozen). We chose frozen, it appeared to be a more manageable serving. Which even in the smaller size I couldn’t finish. It was amazing but oh so sweet, again the smaller size is key unless you know what you are getting yourself into. 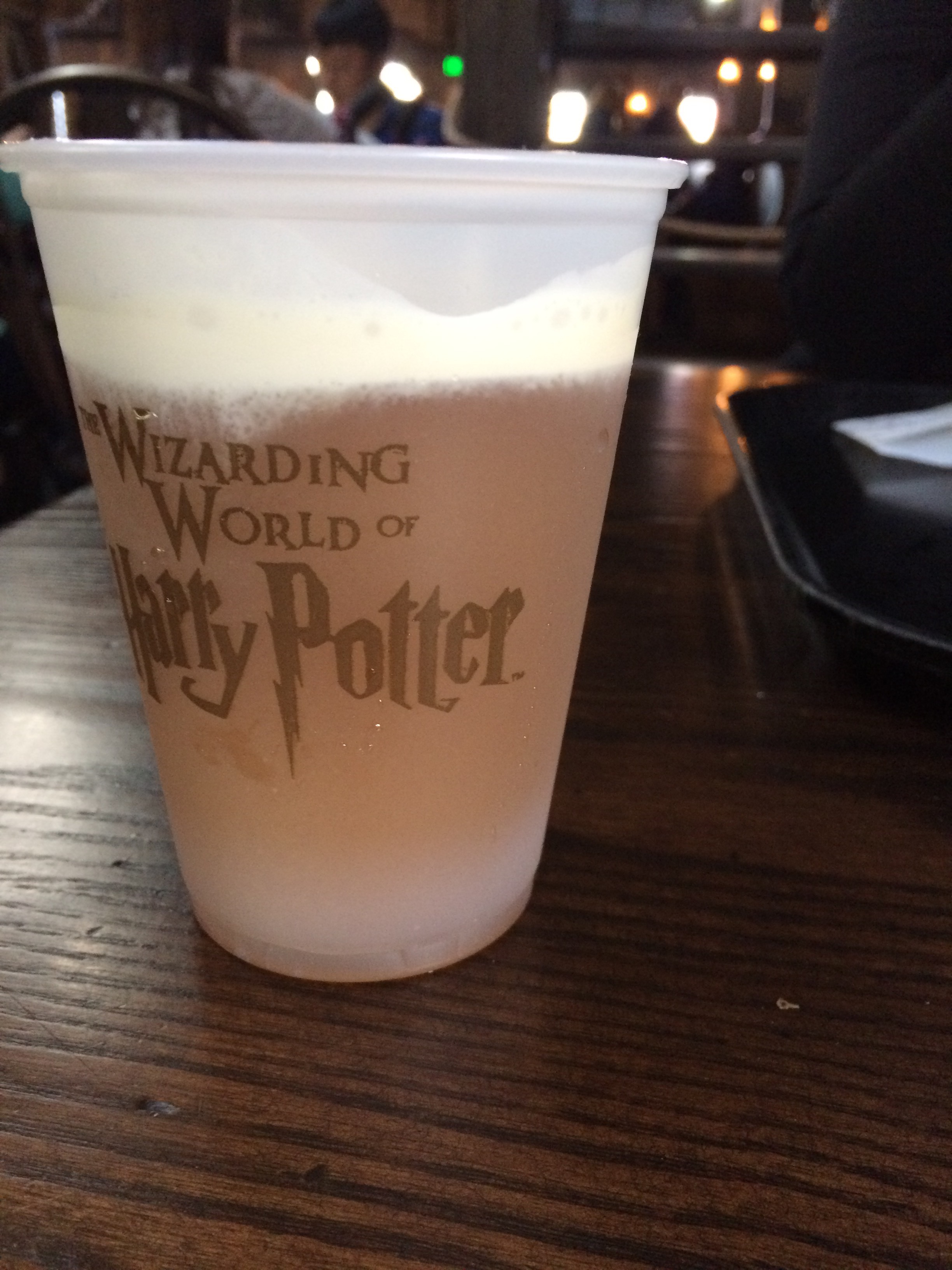 For more information check out my post on Universal Studios Hollywood.  And please  let me know in the comments below if you have been, what your favorite thing was and if you plan on going to the park in Orlando as well. I can’t decide if I should still make the trek out to the original park or if Hollywood was good enough.