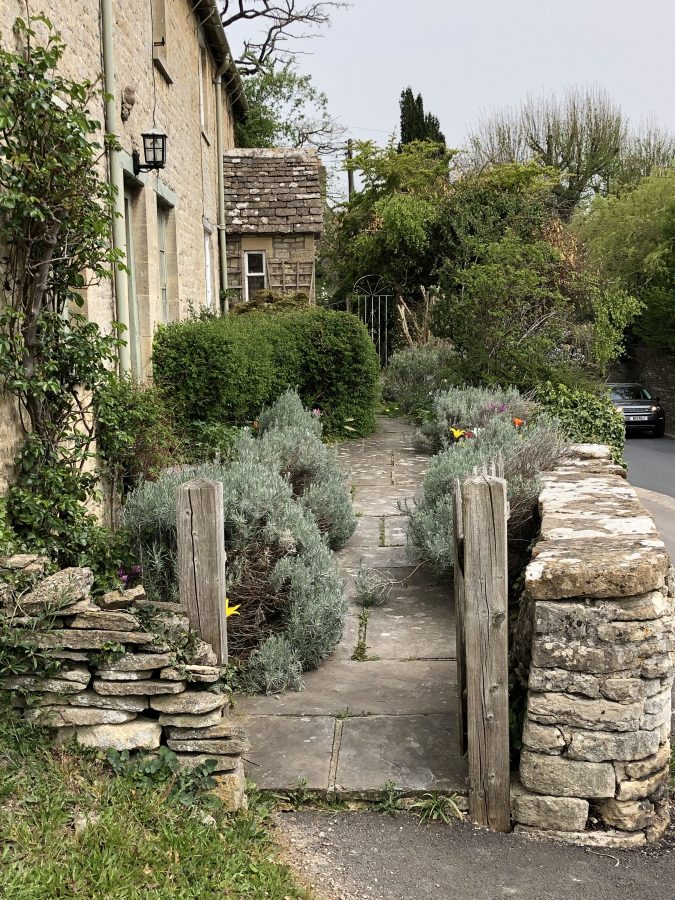 Touring the Cotswolds was one of the more difficult aspects of trip planning for me. I very much wanted to see it, some of it at least. The area is 787 square miles of protected landscape. It was designated as an Area of Outstanding Natural Beauty in 1966 and remains protected today, though it does appear that the areas are increasingly under threat of development. The area is largely undeveloped, mostly farms and small towns. But development does occur for example a new Dyson factory is set to move into the area, and many of the old air bases from WW2 are being sold off and converted into neighborhoods and various businesses.

Needless to say given the low development rate over the years I knew I wanted to see it, old towns, old buildings, my usual interests. The difficulties in planning occurring around exactly how to get there. We didn’t really want to rent a car, screaming around country roads on the opposite side of the road is not exactly relaxing. There really aren’t public transit options and while I could have hiked it like I did in Ireland we didn’t have the time.

Thus commenced the search for a tour. There were plenty out of London, so good news for any of you wanting to tour from a London home base. But I could only find a couple out of Bath.We wound up picking Lions Tours but as it turns out the other tour we were considering was owned by the ex wife of the owner of the company we did tour with. I can’t speak to the competition as it were, but I can say plenty of nice things about Lions Tours.

Booking was super easy, finding the pickup location was easy, our driver/tour guide was on time and had so many great insights throughout the day we really couldn’t have had a better afternoon.

The first stop on our tour was Castle Combe. The town is hardly larger than what you can see in the picture below. It has a pub, a church, and a large manor house that has been turned into a very swanky hotel (which was used in WW2 by the New Zealand Forestry Officers) as well as a motor racing circuit. 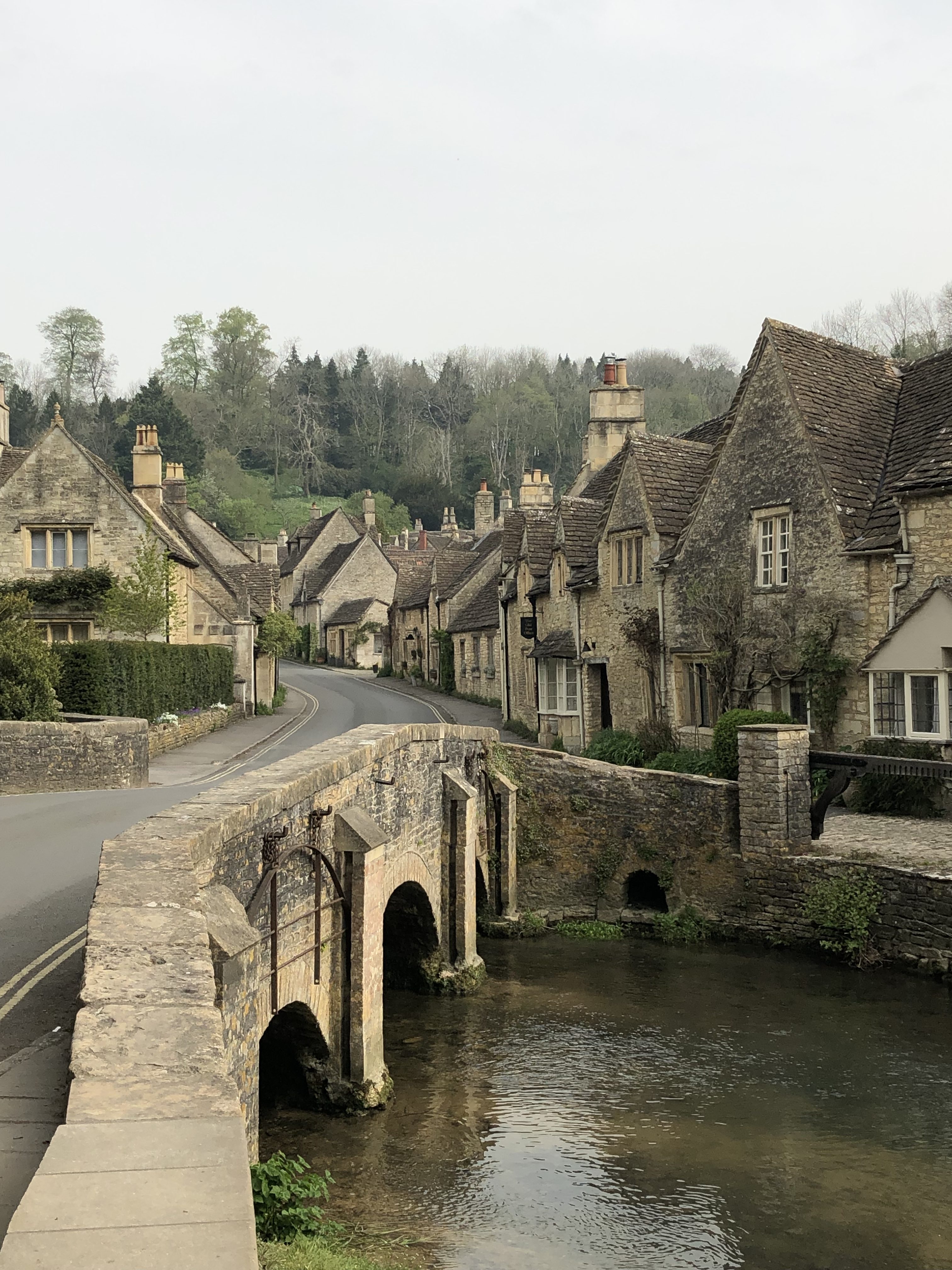 Compared to the other towns in the area, it is largely untouched by modern updates which makes it perfect for filming. Used as Puddleby-on-the-Marsh in Dr. Doolittle, thanks to some fancy movie magic the four inch deep stream was turned into an ocean port. It was also used for filming in War Horse, Stardust, Downton Abbey and numerous other television shows. 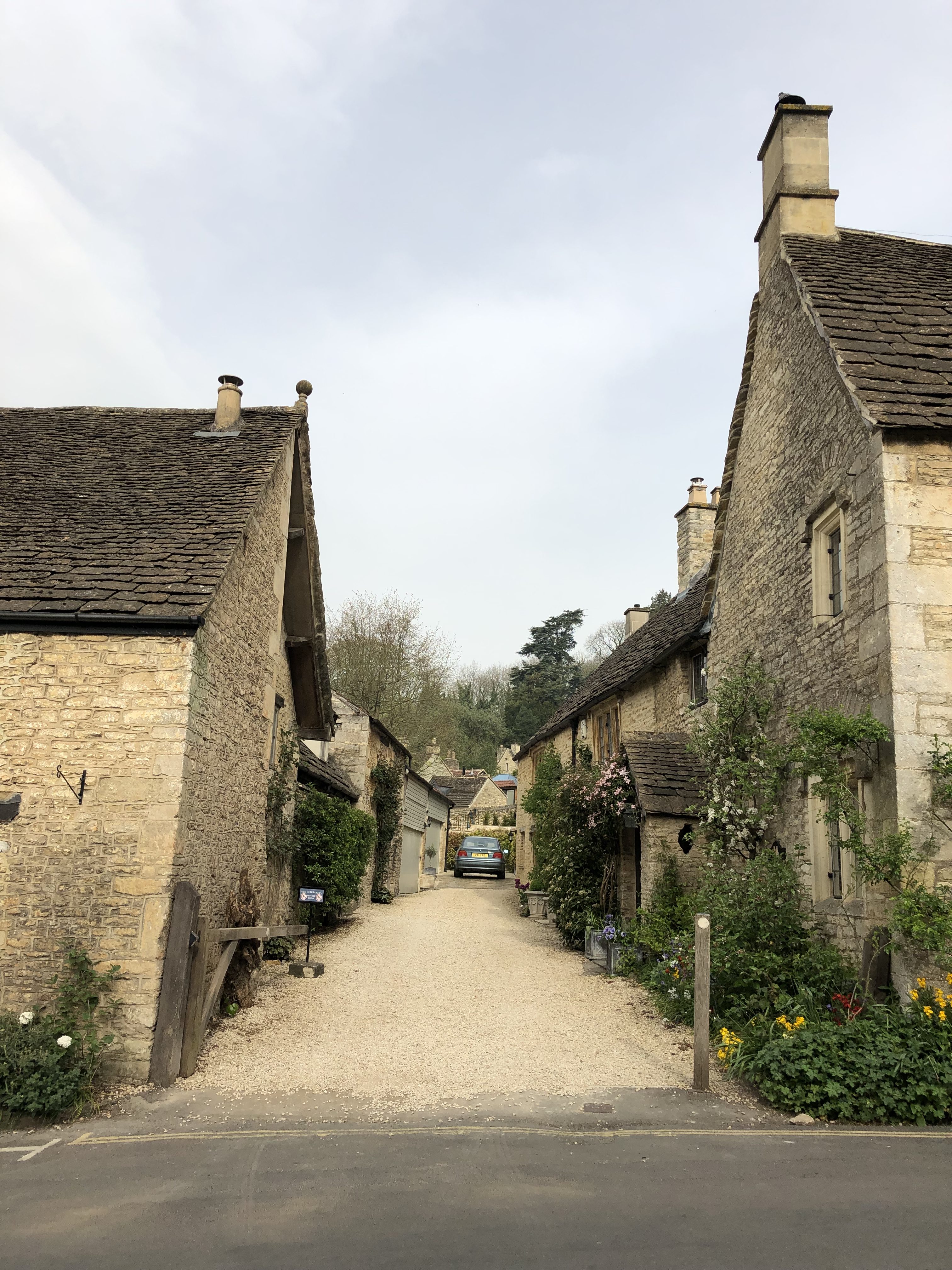 The church is extraordinarily large given the size of the town tucked behind some houses across the street from the market cross, St. Andrews was built mostly in the 15th century by donations from wealthy wool merchants. It is also home to a faceless clock that was built around the 15th century and is likely the oldest clock in the country. Malmesbury was our second stop and a little bit bigger that Castle Combe. It is home to Malmesbury Abbey which was founded in 675. The area has seen it’s fair share of battles, given the age of the settlement it was actually the one of the most significant towns in England at the time of the Norman invasion and the first English King was buried in the area in 939. 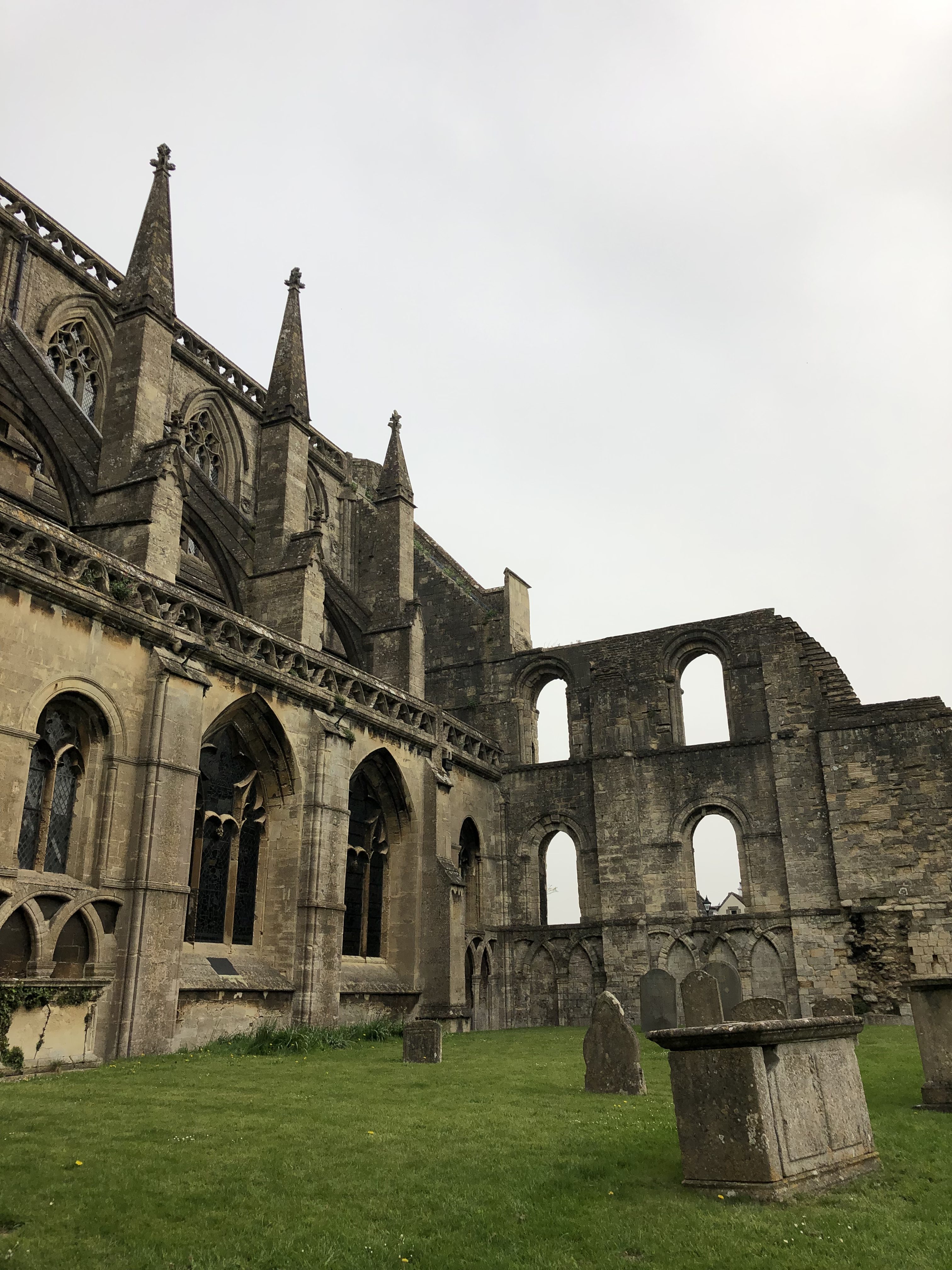 The main attraction to the area now is the Malmesbury Abbey, which was a significant pilgrimage site throughout history. The spire was actually seven meters higher than the one on the Salisbury Cathedral, but sometime in the 15th century the spire collapsed taking a large portion of the church with it. After the collapse the archway through the collapsed portion was bricked over and the remainder of the church remains today.

Aside from the interesting history and architecture the church is also home to four illuminated bibles, the tomb of King Athelstan, and a grave stone denoting death by tiger. It also has a fabulous little cafe toward the back where you can get take-away or eat in coffee and sandwiches, I highly recommend the brie and cranberry. As well as a stained glass window by William Morris. 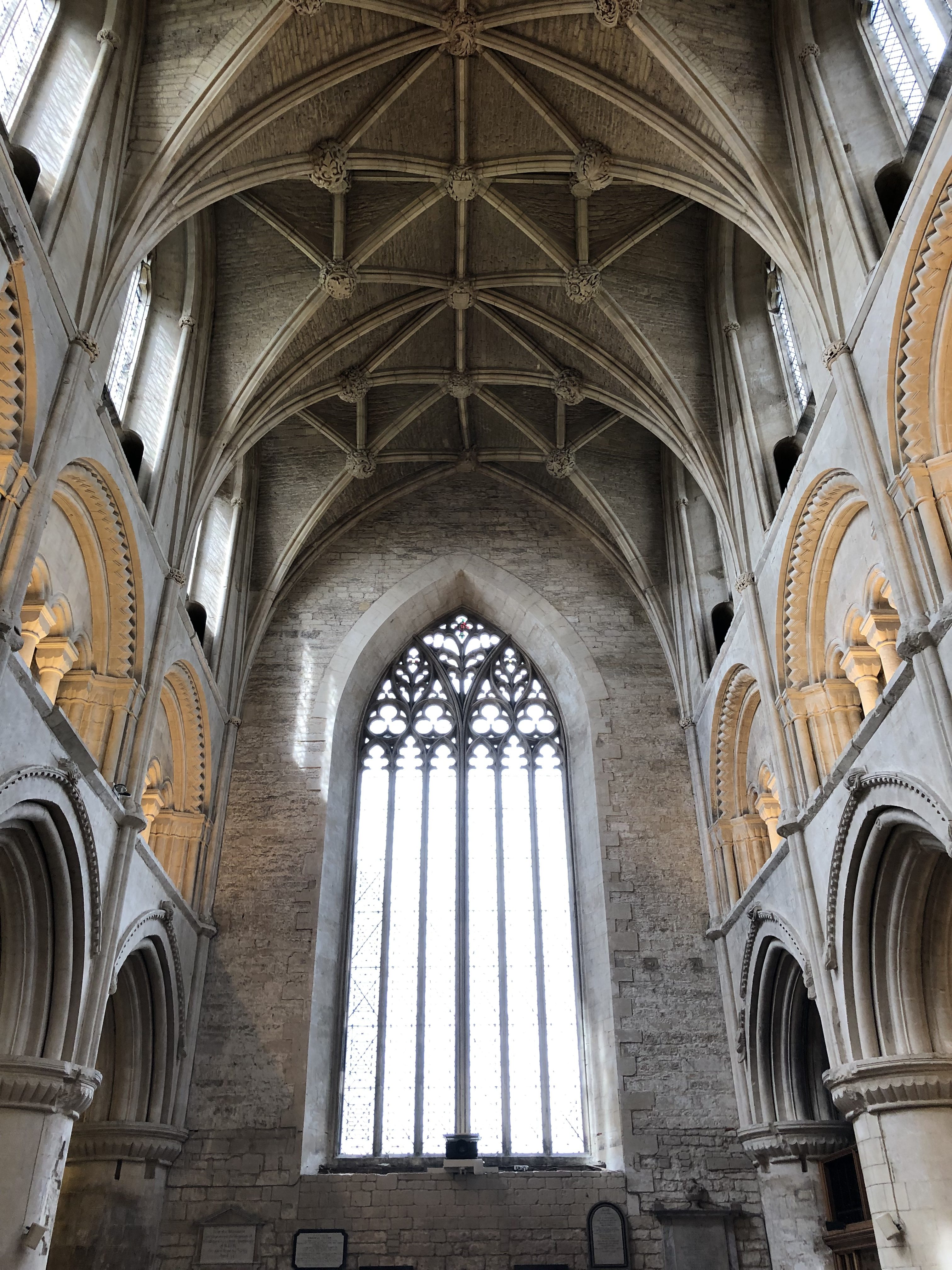 Cirencester was bigger still than Malmesbury. We didn’t have a lot of time there, we just ran a quick peek through the main high street and I popped into the extremely large church that was wedged in between houses and the town hall building. 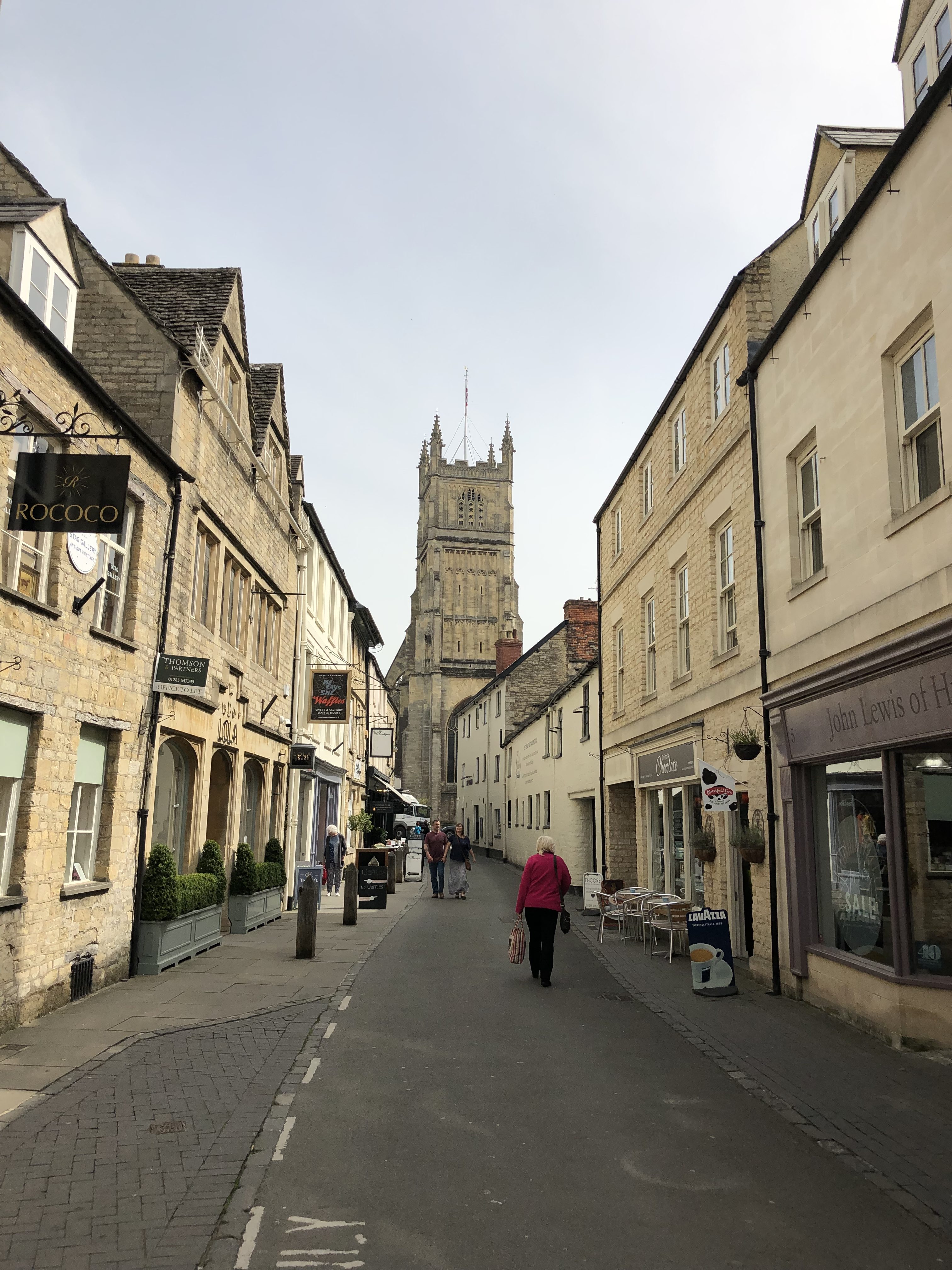 The town had a lot of activity during the early Roman and then again in the Tudor period. There are a good number of shops and restaurants here today as well as plenty of places to stay.

But my favorite part was not surprisingly the church, that had an incredible wooden roof. You can actually smell the wood when you walk in. I have never seen anything like it. 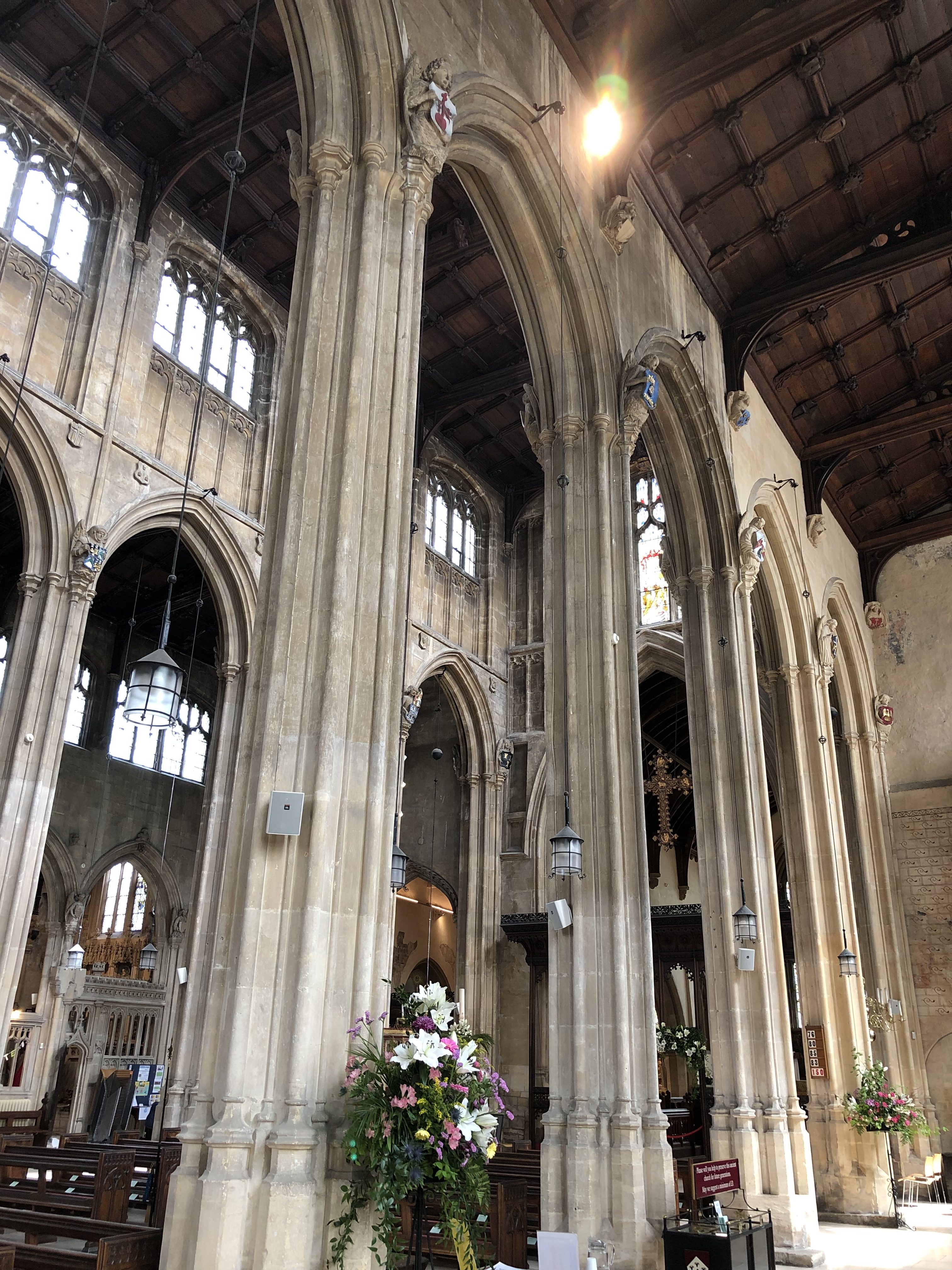 Bilbury was on the smaller side, two main roads, an inn, a fish farm and a small market that also served food and ice cream. Once upon a time William Morris declared it the most beautiful city in England. It was another quick stop, but we did a quick loop down the river and up past Arlington Row a 1300s wool manufacturing building. We toured around and munched our sandwiches which we had picked up at the Malmesbury Abbey. 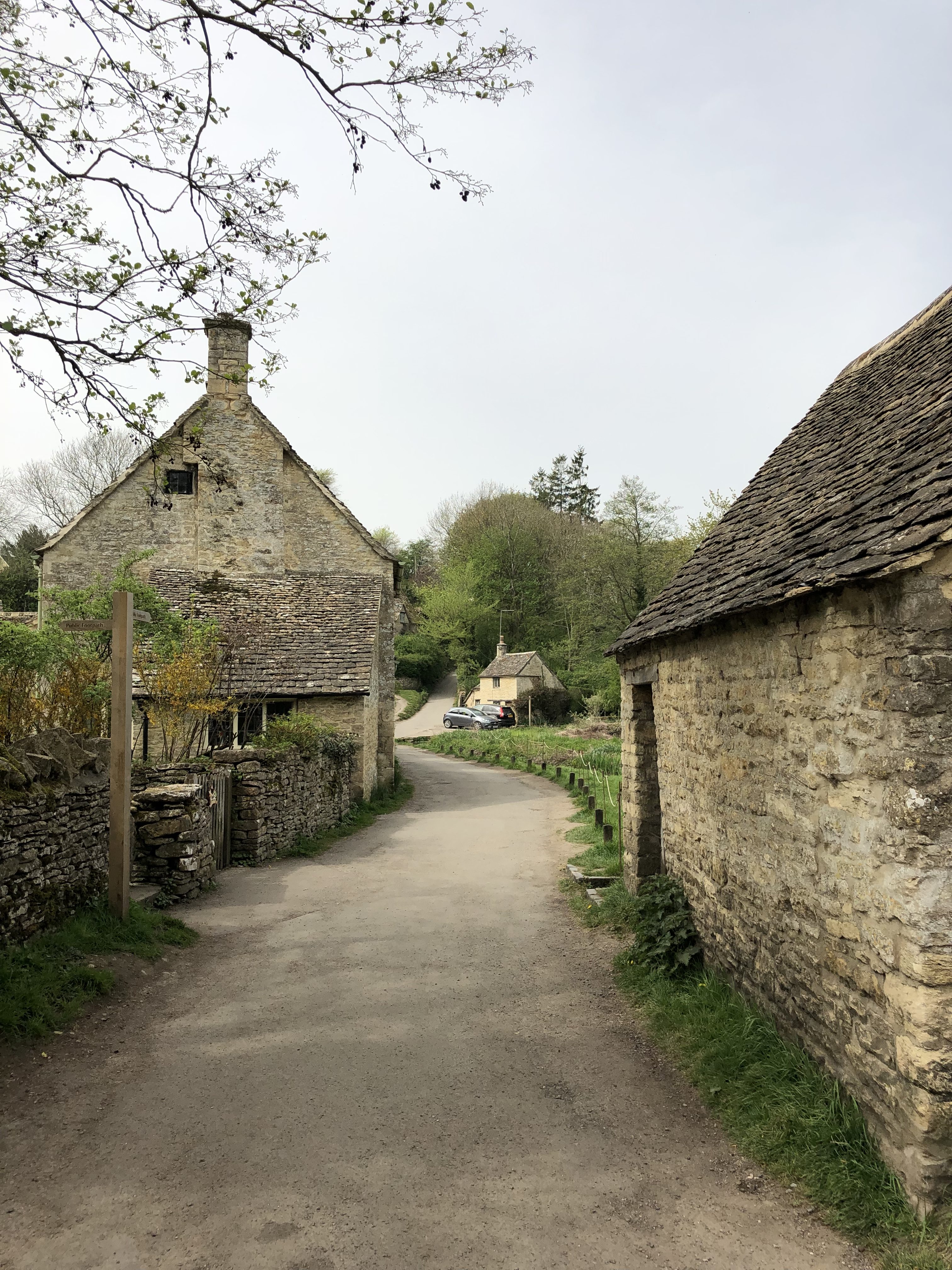 Bourton on the Water

Bourton on the Water is probably on every tour to the Cotswolds, and for good reason it is a gorgeous little town built up on both sides of Windrush River. It has a ton of things to do and see, loads of restaurants, and places to stay. But unfortunately because of all of these things it is also terribly popular and very commercialized. It was almost impossible to walk around, let alone get a picture of anything other than other people. I had to walk all the way to the end of town to get a decent shot and there are still loads of people in it. For this reason it wasn’t my favorite spot but it was really beautiful and I am glad I got to see it. 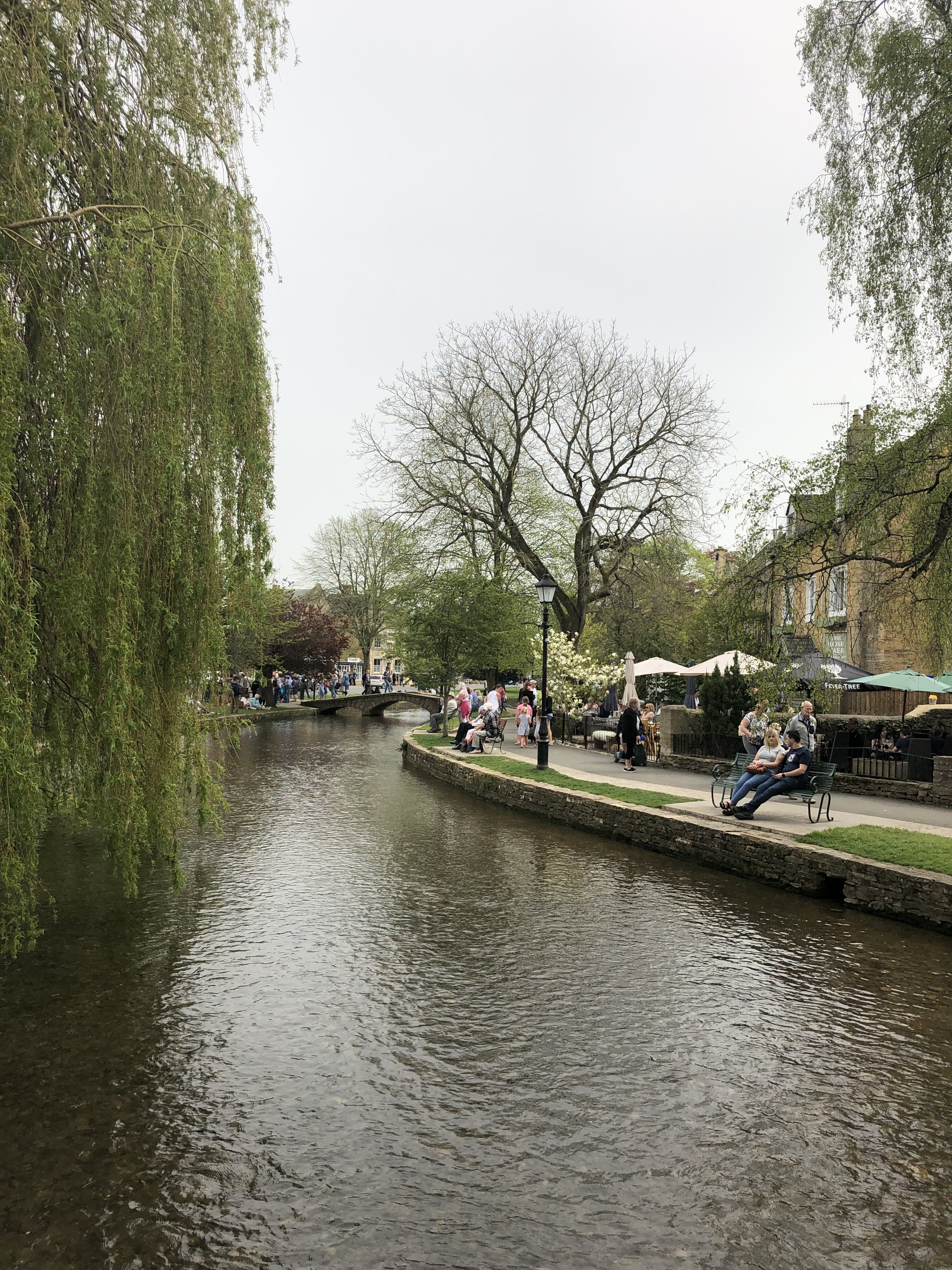 Tetbury was our last main stop, it was in its day a large market town especially for the wool and sheep trade. We only had about 15 min in town, and our tour driver really wanted to show us this staircase which was used by all merchants driving their sheep into town. 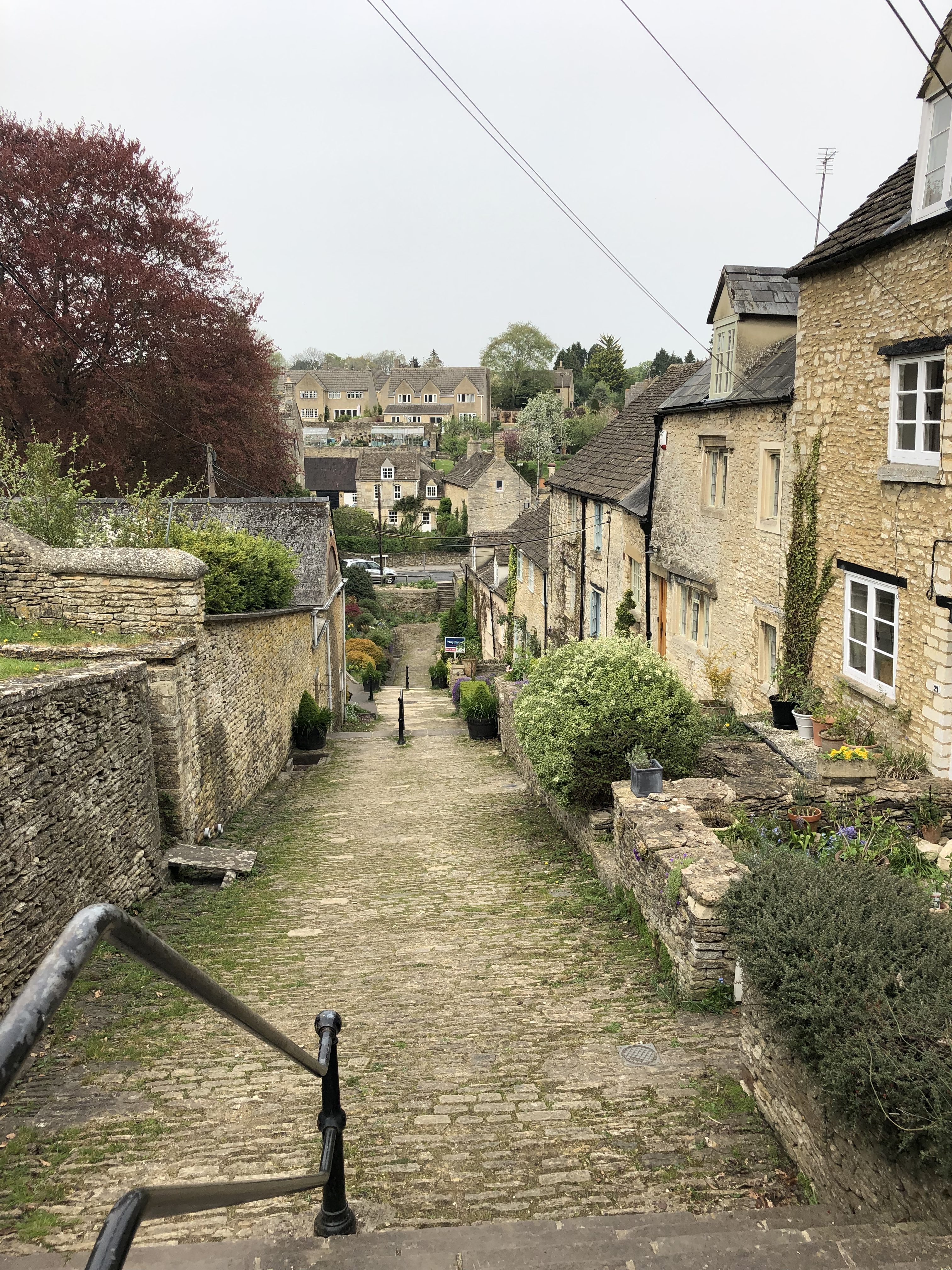 It was pretty neat seeing it but more exciting to me at least was the house right next to it. A former Malt house is the location that Eisenhower allegedly met with Churchill to start planning the D-Day invasions during WW2. It is now the home to the Girl Guides in the area, so you cannot tour but there is a nice little plaque commemorating the location. 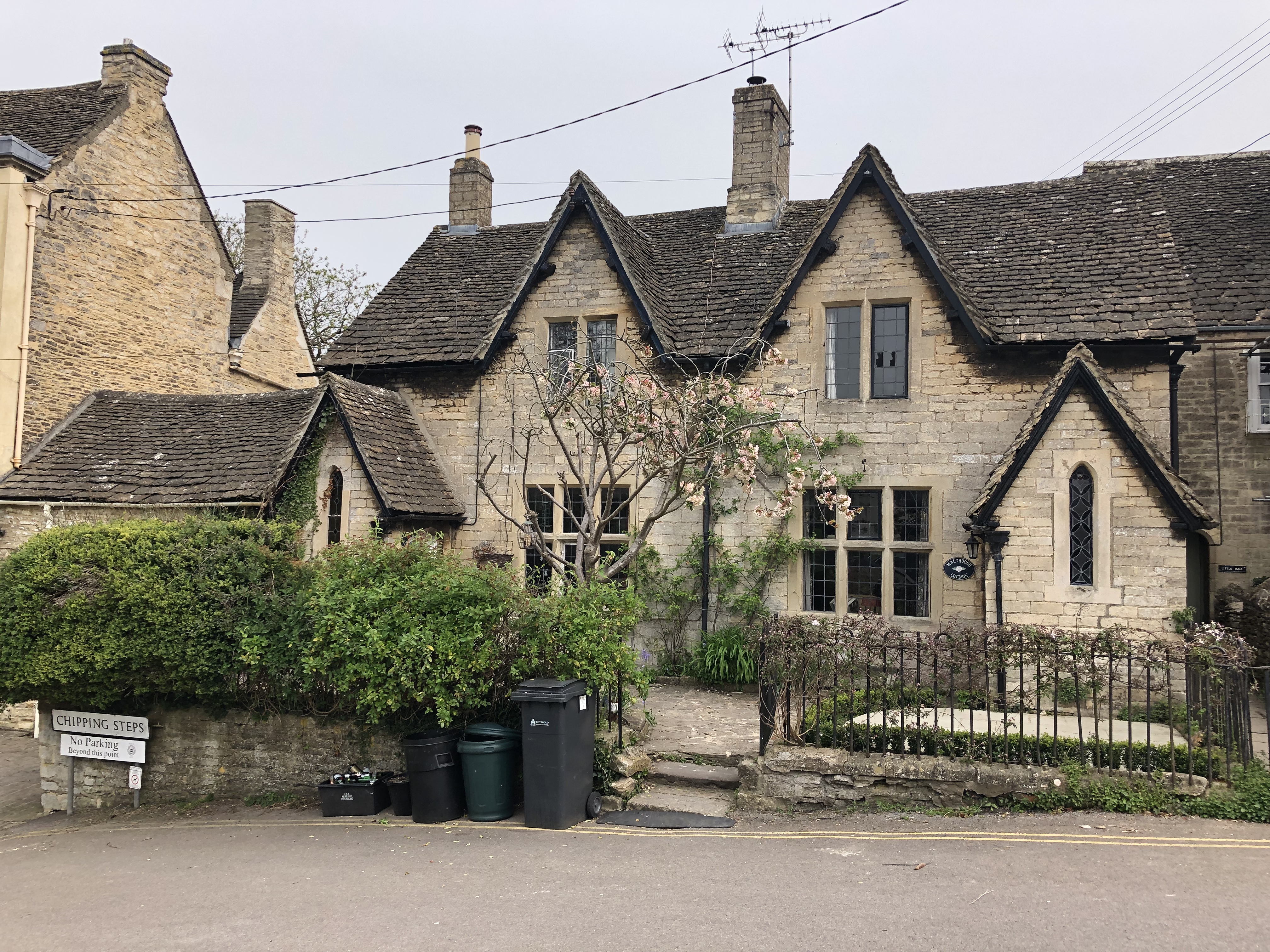 Our last stop was not a planned stop, but we had a little extra time and our tour guide just couldn’t help himself. So we took a little detour onto the grounds of Badminton House. Like most manor house locations a large land owner was given lands for being in favor with a king, which was then farmed by tenets on the land. The lord of the manor would receive income from the tenet farmers and in return they would be protected by the wealthy family. In addition to the individuals working the farms, the large houses were staffed by hundreds of people and small towns on the grounds were created to house the individuals that worked up in the house. 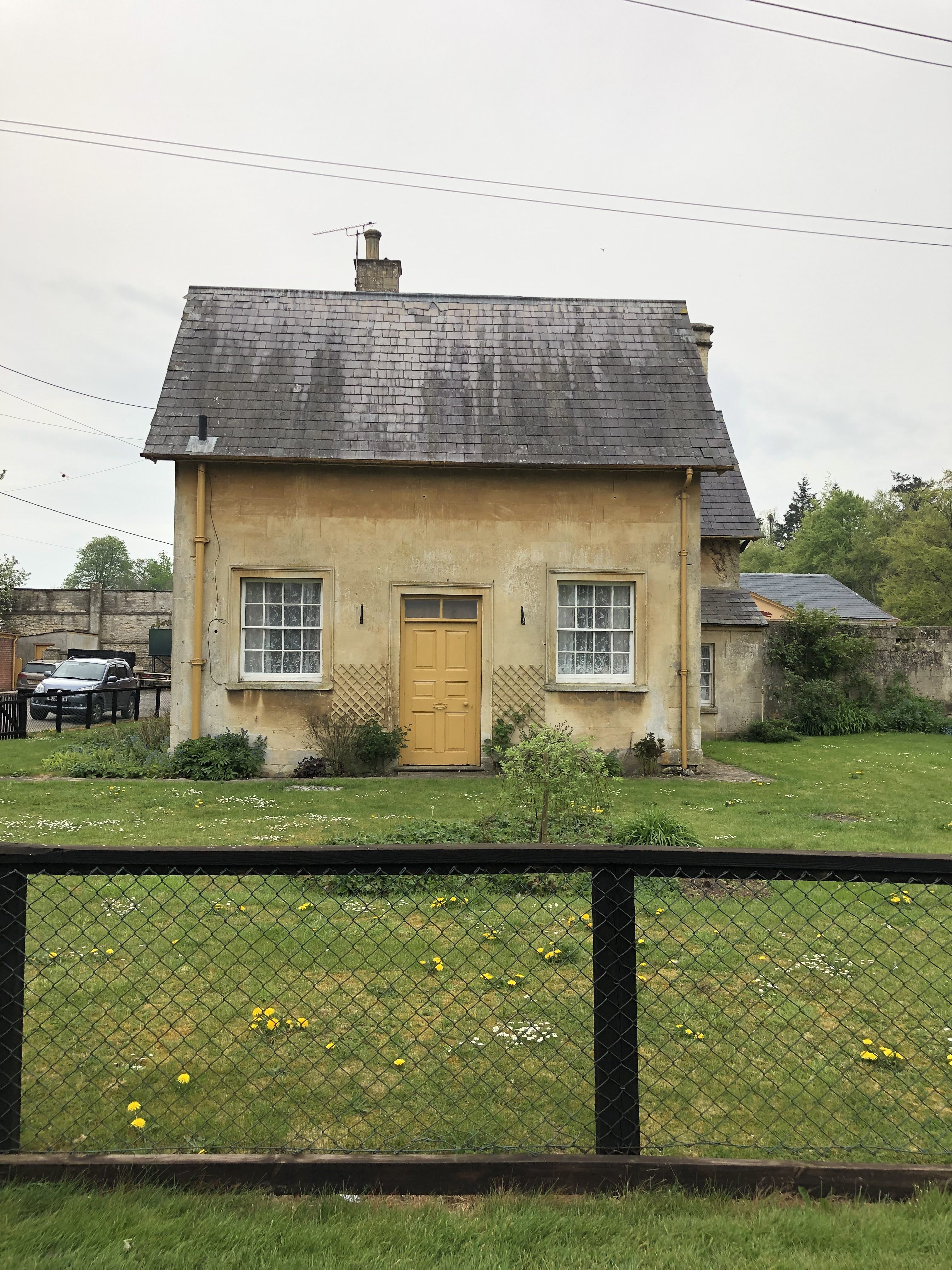 Badminton is one of the few privately owned manor houses left in England, inheritance taxes have managed to make private ownership terribly expensive and most people have sold the large homes or turned them into hotels, schools or in one case at least an amusement park of sorts. But this one for now at least is lived in by the family that allegedly invented the sport of badminton. We couldn’t get close enough to the main house to get a decent picture but I did take a picture of the house that belongs to the family that takes care of the dogs. I’d live there. Then again I would probably live in any of these charming towns, touring the Cotswolds was a dream come true.