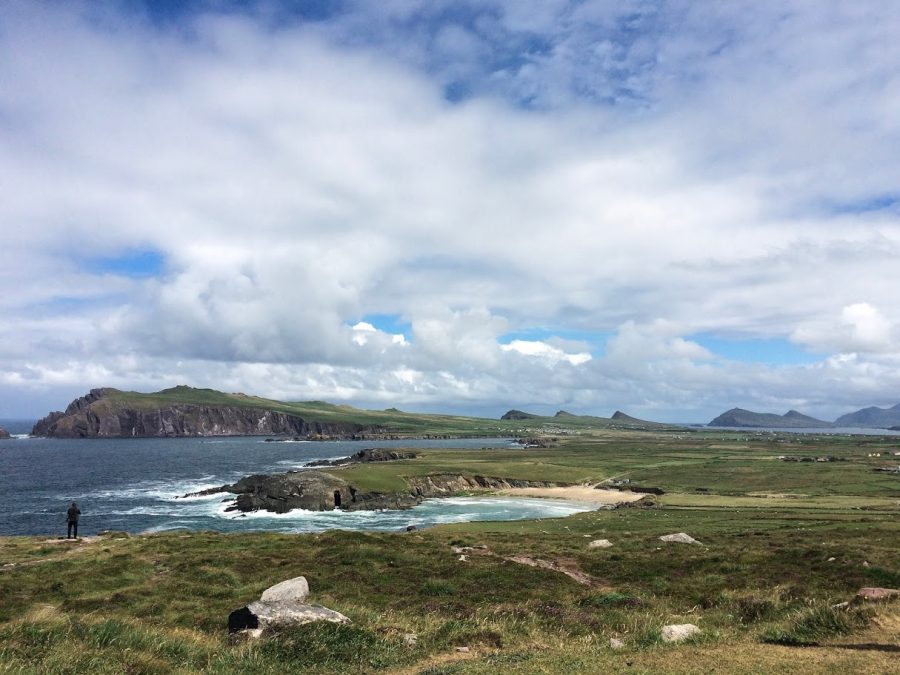 In this months installment travel inspired multi media and foods we are going to travel at home to Ireland. A couple years ago now I hiked for a week on the western coast of Ireland and had the absolute best time. In preparation I read as much as I possibly could to try to get my head in the right space to be in a new place. I have included all my favorite books that I read during that time period, as well as movies I love and movies that were filmed where I visited.

I am not a historian and would never be able to do any place justice by recapping its long and complicated history but somethings to note before you start diving into Ireland multimedia.

The first settlers of the area were neolithic people, hunter gatherers who wandered up into land that was newly released from last glacial period. During the Iron Age the Celtic language and culture emerged, though from where and how is still largely debated. Between then and now they were invaded by Vikings, Danish, Romans and the English. Through all the invasions, the brutal political upheavals and oppression they still maintained their Celtics past. In fact even though English is the official language of Ireland, Irish (celtic) is primarily spoken on the western coast of the island. For those folks of the Gaeltacht region English is second language and people from all over Ireland send their children to schools on the west coast for immersion programs to learn the ancient language.

Before I left for my trekking trip in Ireland I wanted to get a good sense of the history of the place so I made sure I read Edward Rutherford’s books The Princes of Ireland and Rebels of Ireland. What I learned very quickly was that there hasn’t been a lot of cheery goings on in their history. But what I learned immediately upon entering the country is that despite that fact they are the nicest people on the planet. Needless to say it can be difficult to find books that take place in Ireland that aren’t completely gut wrenching but that’s kind of okay I think. It’s important to understand the struggles of our pasts, so I cannot guarantee any of these books will be tear free.

The Yellow House is a novel about politics in Northern Ireland during the 20th century which is only really touched on at the very end of Rebels of Ireland. For something a little lighter Santa Montefiore wrote a series called The Deverill Chronicles which are easy reads but still provide a feeling of being in Ireland. Frank McCourt’s Angela’s Ashes was quite popular for a long while. Forever by Peter Hamill takes place mostly in New York but the first bit takes place in Ireland and was a really incredible read. Or you could go classic with James Joyce’s Dubliners. Or if you do not like the sounds of any of my suggestions there are nearly 600 books set in Ireland listed on goodreads to help you find your way.

If you aren’t in the mood for books there are quite a few movies with Ireland scenery or about Ireland. Angela’s Ashes again as the book was made into a movie in the late 90s. Far and Away as well as Ryan’s Daughter were both filmed where I was hiking a couple years ago, as well as scenes from the new Star Wars movies. Braveheart, Enemy at the Gates, Saving Private Ryan and Princess Bride all have scenes filmed in Ireland even though they did not take place there. And I would be remiss if I didn’t mention Leap Year and Laws of Attraction two very cheesy romantic comedies that are easy watching and oh so happy.

I should also mention there is a very lovely youtuber that goes by the name Fairyland Cottage who lives in Ireland and discusses slow living and sustainable choices. She is wonderful and her videos are so relaxing.

I was a little hesitant to try Irish food, by no fault of theirs I was more worried about the English influence. This was before I had spent any time in England and my only experience was terrible airport food during a terrible layover. Turns out Irish food is phenomenal. There is nothing quite like tucking into a good Irish Stew with Soda Bread, it will warm you right up on the coldest winter days.

My favorite meal while over there was actually a zucchini soup, topped with cheese toasties. The area of Ireland I was in was especially know of their shellfish, particularly oysters and mussels but I cannot eat them so I never got to experience that part of the cuisine. Fish and chips in all the pubs though were honestly some of the best meals I have ever had. We also saw a lot of oatmeal at breakfast (if you weren’t eating a full Irish) and mushy peas on the side of dinner dishes instead of potatoes. As well as simple tomato and cheese sandwiches which were packed in all our hiking lunches.

And you can of course wash it all down with a nice glass of Guinness or Irish Whiskey. Or if you are a lightweight like me a nice hot cup of Irish Breakfast tea.

I hope this little snippet of information will help keep you busy in the coming months. And helps inspire you to travel to new places whether that be physically or travel at home to Ireland.