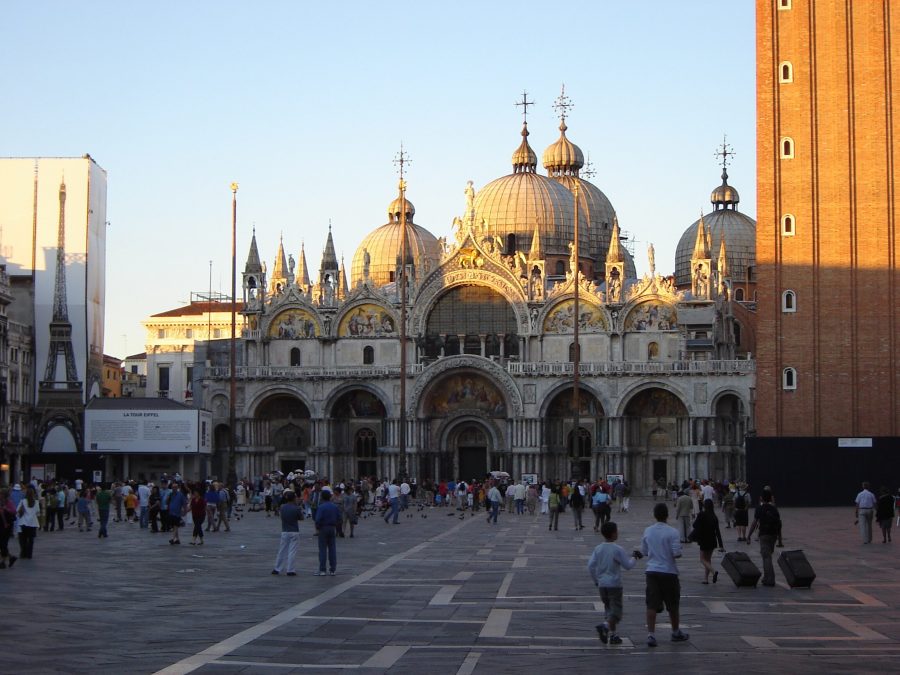 I have been to Venice twice, the first time was in college. I was studying aboard in a neighboring country and a group of us set off for a long weekend in Venice.  It was the first time I had traveled (other then getting to my study aboard local) without an adult. Which is funny because I was technically an adult but I still didn’t really feel like it at the time. And traveling without supervision still felt strange.
We had taken the train all the way onto the island and when we left the station the only transport option to our hotel was a boat (there are no cars on Venice) which was more than any of us wanted to spend. So we decided to walk, it’s an island how lost can you get? Turns out very. We walked for at least three hours around curving narrow streets over countless foot bridges. Every thing looked the same and there were no street signs. Well there were, just not the kind we were looking for, they are are all painted on the corners of buildings. When we finally by chance stumbled onto St. Mark’s square   I remember nearly crying when I saw the Basilica for the first time. It wasn’t the first time I had seen an amazing church, nor was it one I was particularly obsessed with but it was there and it was beautiful. And it also meant we weren’t lost anymore. 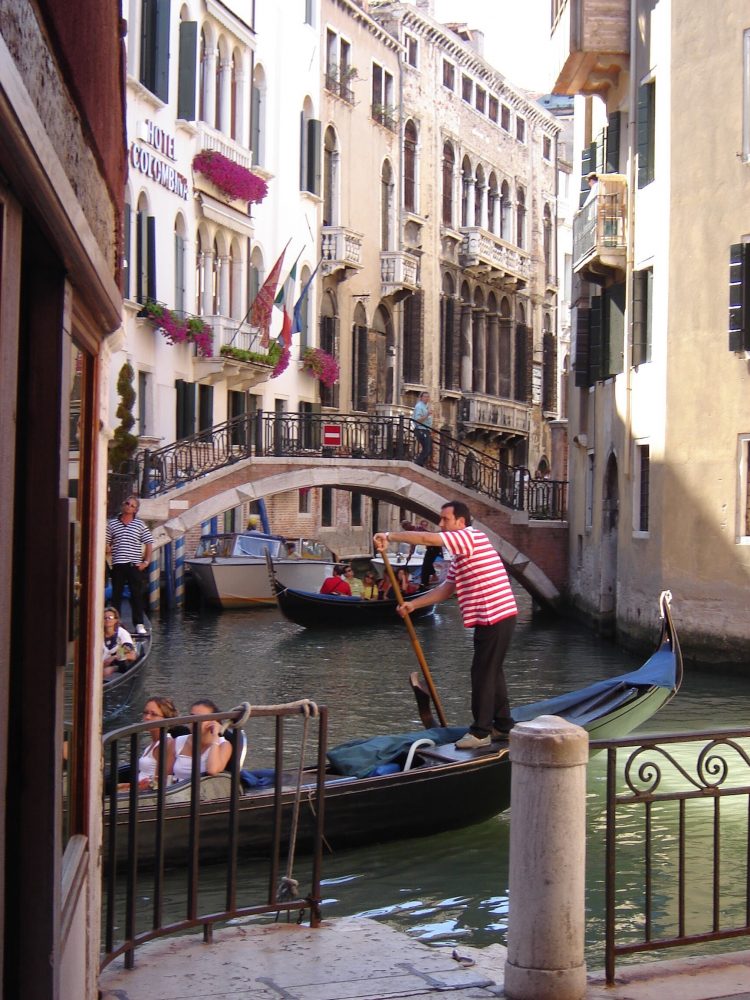 The second time I went was post college and it was slightly less dramatic. We had left our camp site in the middle of the day and had taken our little rattly trolley up to Naples. The trolley went through a several mile long tunnel on the way back up to Naples, we had been though it several times in the last couple days, but of course on the day we had a train to catch the darn thing stalled out. I will add we were traveling with large backpacks rather than suit cases and the train was standing room only and it was about 105 degrees if not more. We probably stood in the dark in the sweltering train crammed in like sardines for at least 45 min listening to the driver try to turn the engine over on the trolley. We did make it out, and we made our train but neither of us were terribly happy about it. 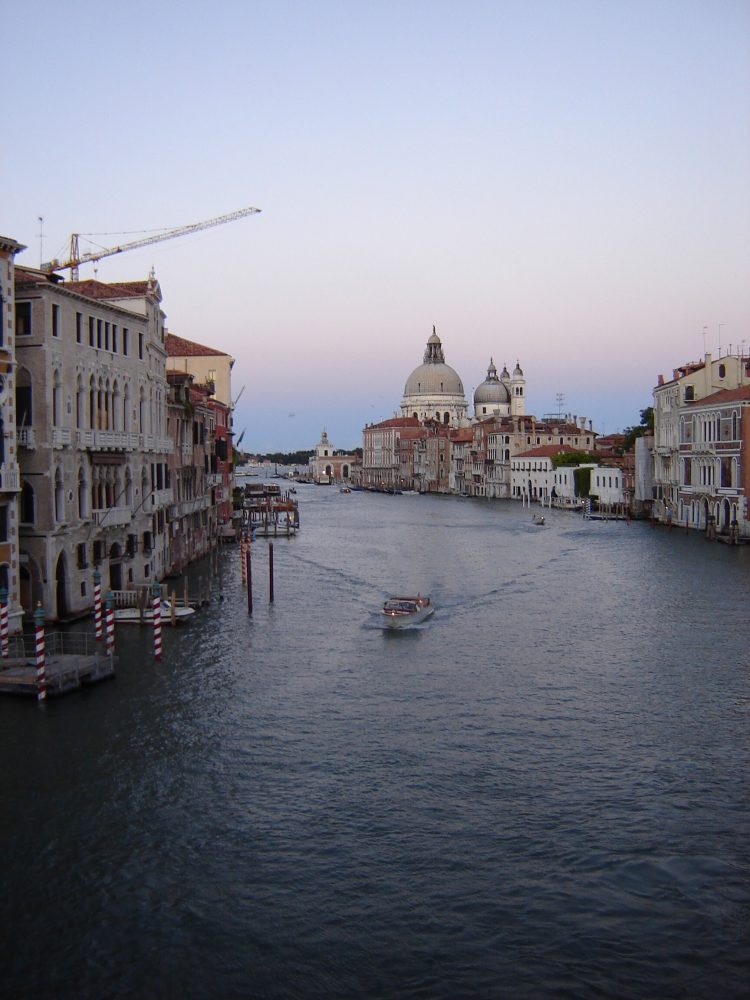 We took an overnight train up to Venice. If you are up for the adventure and looking to save a few dollars this is a really great way to travel longer distances. You can sleep while you are moving to your next destination and it is usually cheaper than a hotel. Though depending on the train (because they are all different) you may not get a private sleeping car, there were several times we were bunking up with strangers.
When we arrived in Venice it was still quite early, so we headed out from the train station on foot. At least this time I knew where to find the street signs. We made our way over to the area of our hotel for the first night and then found a coffee shop that was open. We consumed an ungodly amount of espresso and palmier cookies. And then when it seemed as though we had stayed as long as socially acceptable we found a bench and watched the boats move around the canals until we could check into our hotel. 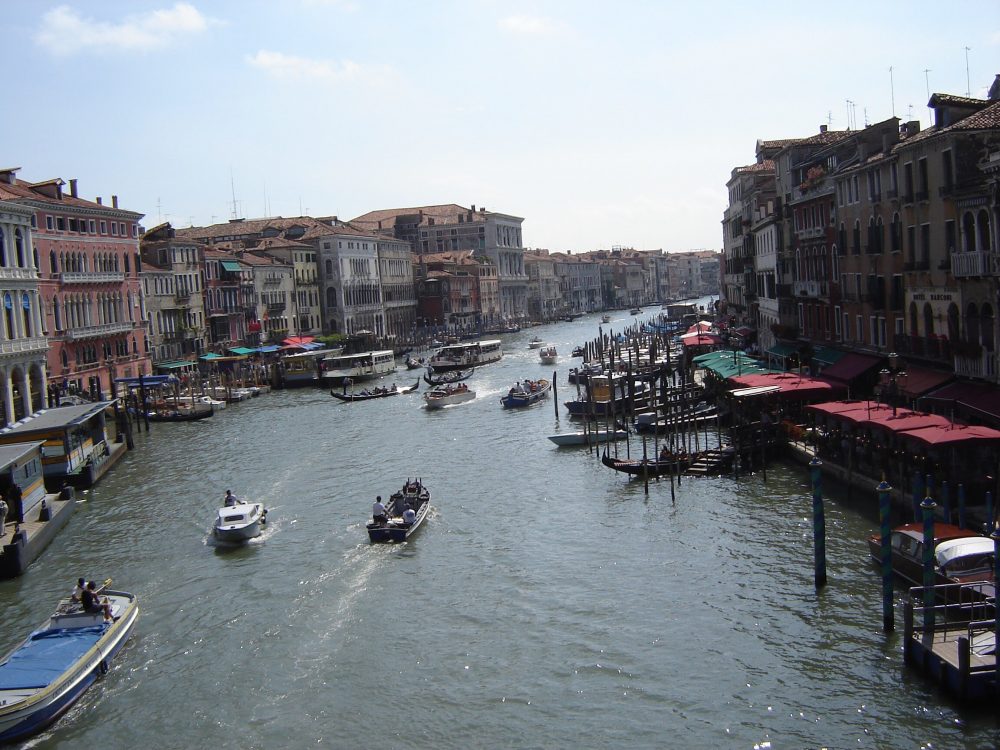 The first hotel we stayed at was a pretty typical lower cost hotel. Clean, two twin beds, plain white walls and giant windows that over looked the canals. The second night we stayed at a hotel that I had stayed at previously in college. When I visited in college it was being renovated so we got a discount rate and they stuck us up in an attic room. We loved it, four girls crammed into a small room overlooking the roof tops of Venice. Our bathroom had no separate shower so you had to wipe down the toilet and sink after you were done. And we had to take what felt like an ancient servants staircase to get to the dining room for breakfast. When I went back three years later the renovations were complete and the Hotel all’Angelo was a glorious four star stay. The bathtub was big enough to drown in and everything was gold and marble.
While we we were there we toured San Mark’s and the Doges Palace. We saw the Bridge of Sighs and saw where Giacomo Casanova was imprisoned for “affront to religion and common decency” which he later escaped from. And we shopped along the Rialto Bridge. 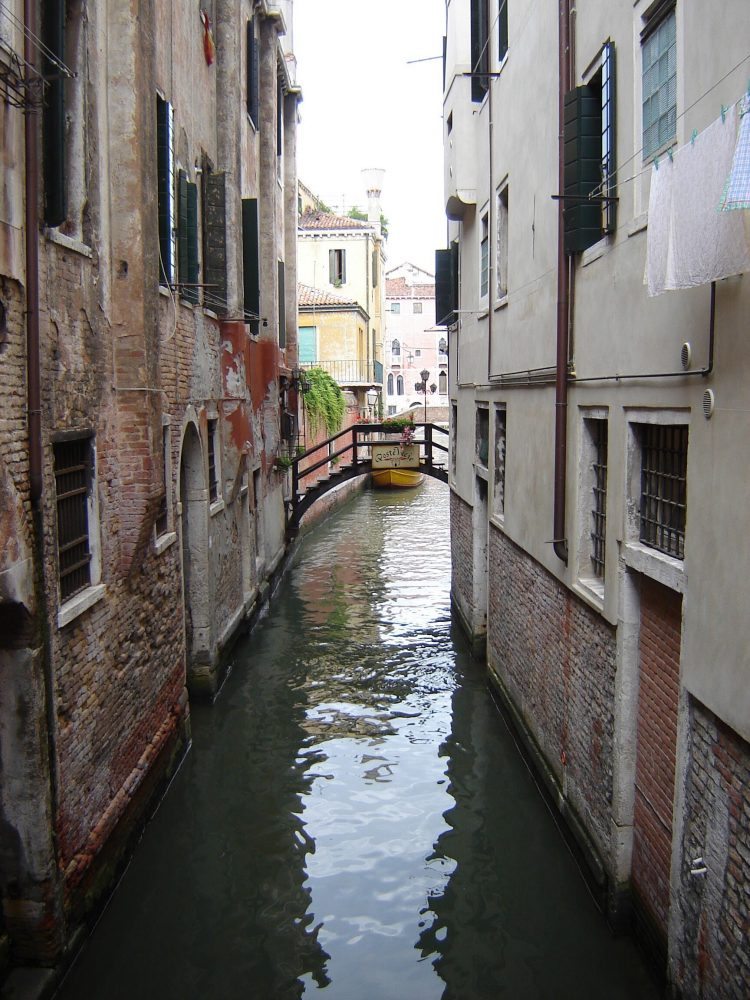 I really love Venice but there isn’t actually a lot to do on the island itself. There are some small museums and the Dodges Palace that you can explore. There is a lot of shopping, plenty of classical concerts that you can attend. Which I urge you to do if you get the chance, most are held in churches around the city and the acoustics are like nothing you have ever experienced.  I attended one in college, we got all dressed up to walk over to it. Then when we got outside we realized it was pouring rain and high tide so the square was flooded. We waded our way over to it arrived late and soaking wet but still had a glorious time.
You can also take a boat over to Murano to tour the glass blowing studios or over to the Church of San Giorgio Maggiore which you can see from San Mark’s. Someday I will make my over to those other islands. 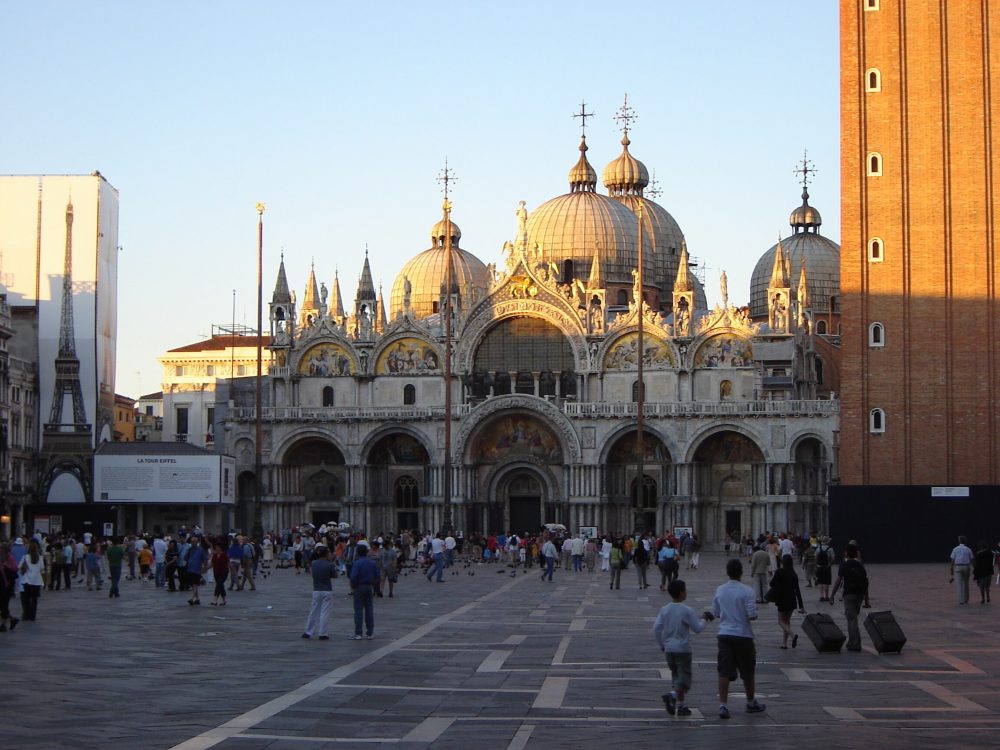 But personally I like that there isn’t a laundry list of must see places. The city is beautiful and unique and to me the best way to experience is to just live it. Wander the streets aimlessly, pop into random shops, talk to locals, eat everything that sounds good and just sit and watch life go by on the canals. The most vivid memories I have of the place is the hardware store we found and the little dog named Luna that we found snoozing outside of it. The sheer volume of pizza and gelato we consumed from street vendors while watching people deliver food to restaurants and homes via narrow canals and even narrower boats. And watching all the couples in love dance in the middle of the street from music that seems to always be present and always lovely. 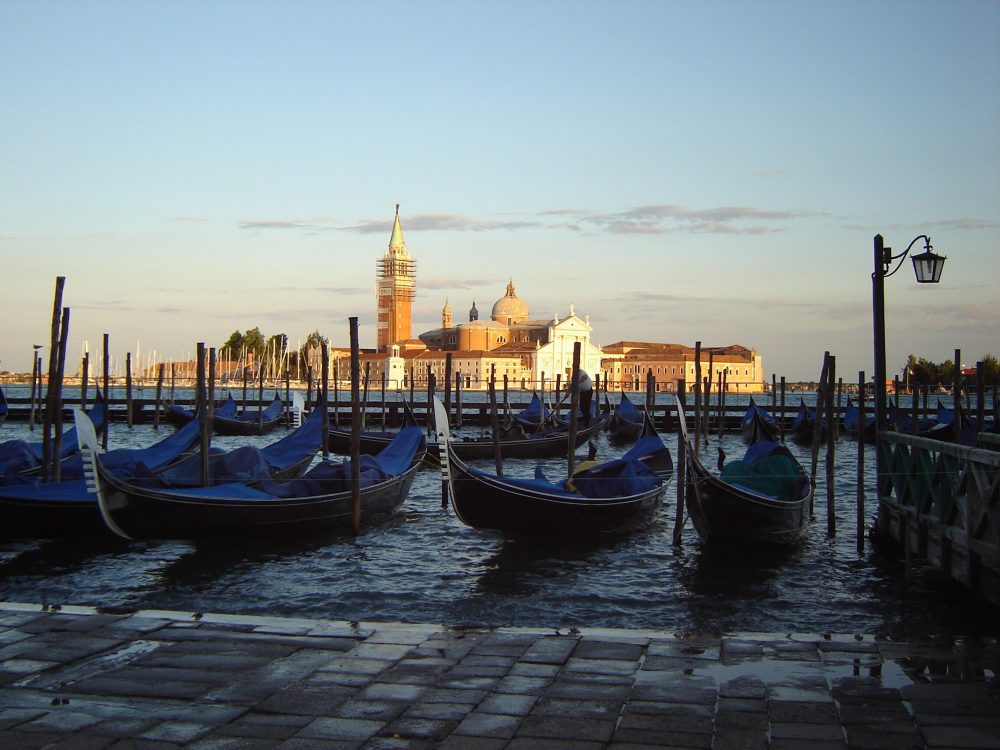 We left Venice as we arrived in the dark on a night train to Austria. I haven’t been back but I do want to return one day. It is a really great city for an extended relaxing stay or even just a night. Either way the experience is most certainly worth the trip.