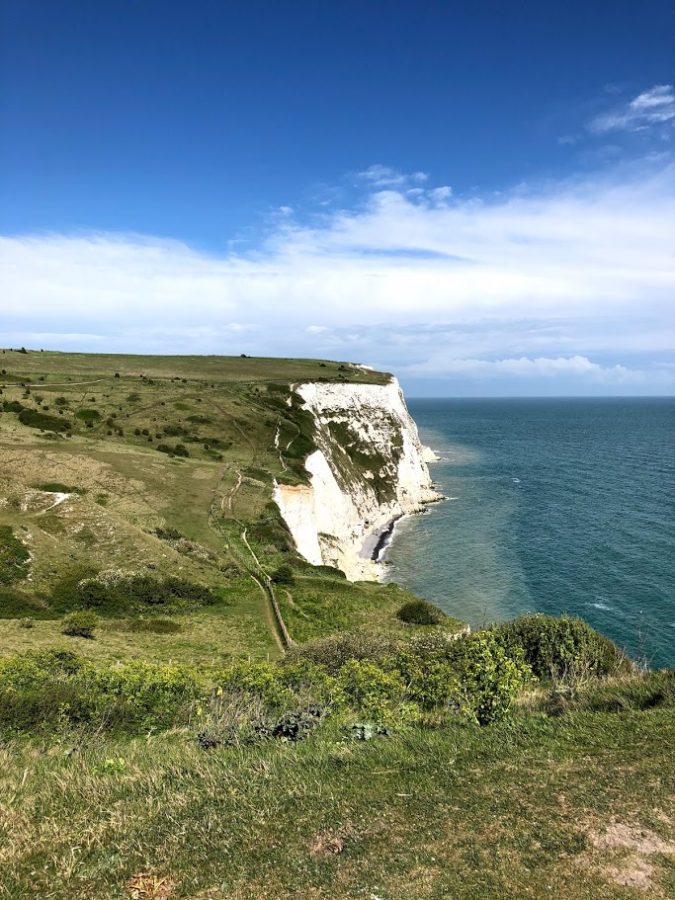 As I mentioned last week a lot of people seemed confused about why we wanted to visit Dover. The main one was to see the Dover Castle and the other was to see the White Cliffs of Dover and hopefully walk around on them.  Spoiler alert: we loved both and while walking the White Cliffs of Dover we even found things in the area that we want to come back to experience at a later date.

Dover Castle sits on the easter hill of the city of Dover, right above the port docks. It is allegedly the largest castle in England, shockingly untouched by cross channel shelling and blitz bombing. We were told this was actually because of the presence of a certain abdicated king at the castle during the raids and his relationship with the Nazis, but that could just be rumor. Either way its a fun rumor. 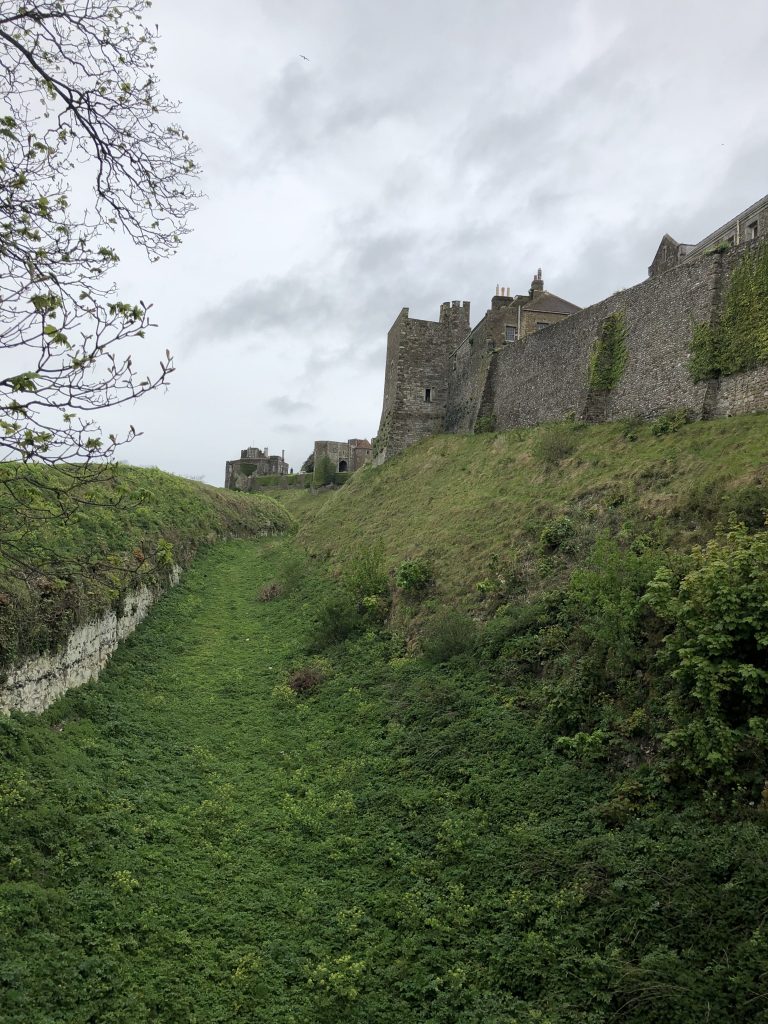 There is evidence that there was a castle structure here dating back to the Iron Age or even earlier. Then when the Roman’s invaded England they built light houses on the site to help their armies find safe harbor. The site continued to play a role in shaping England’s history through the Saxon and Norman conquests. Henry II was responsible for the shape of the castle one sees today, though more modern buildings were also built up during the Napoleonic wars as well as WWI and WWII as the site was used for planning and communication as well as defense. You can see France from the castle walls after all, good place to stand to see your enemies crossing the channel.

Visiting the castle proved very interesting not just to us but to all manner of tour groups from France and Germany as well. You can tour not only the castle grounds but the tower built by Henry II, which at the time was the political center of England. The tower is built up in replicas to give everyone a feel for what it was like to live and work there. The place is massive and we got turned around more than once, but very cool to see. I could have stayed there all day. 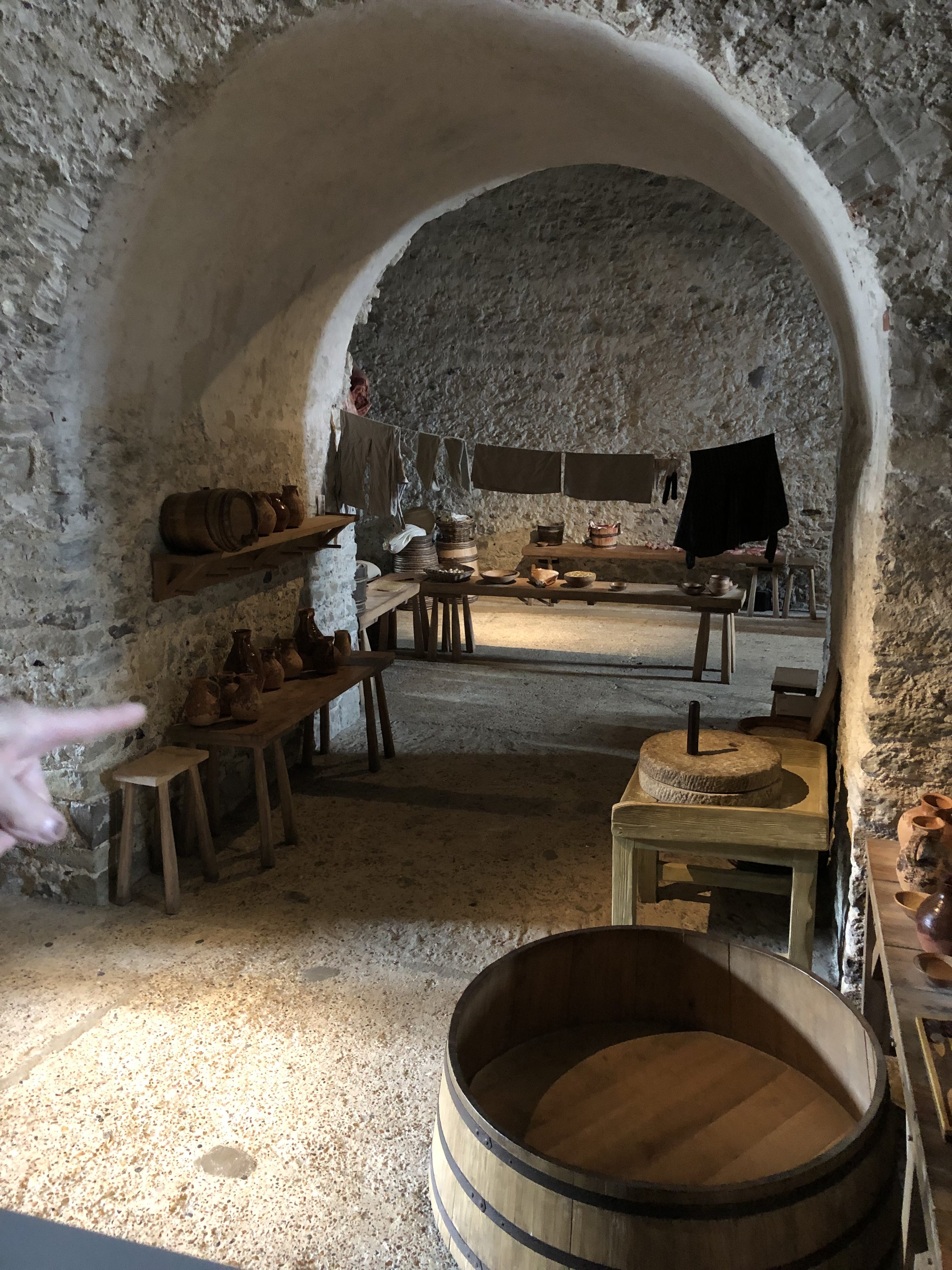 In some of the newer buildings there are interactive media displays explaining the history of the castle, what became of Henry and his two sons, which was actually the basis for the story of Robin Hood. Richard the good son was off to the crusades and left the country in the hands of John the slightly less qualified son who made a mess of things with France. 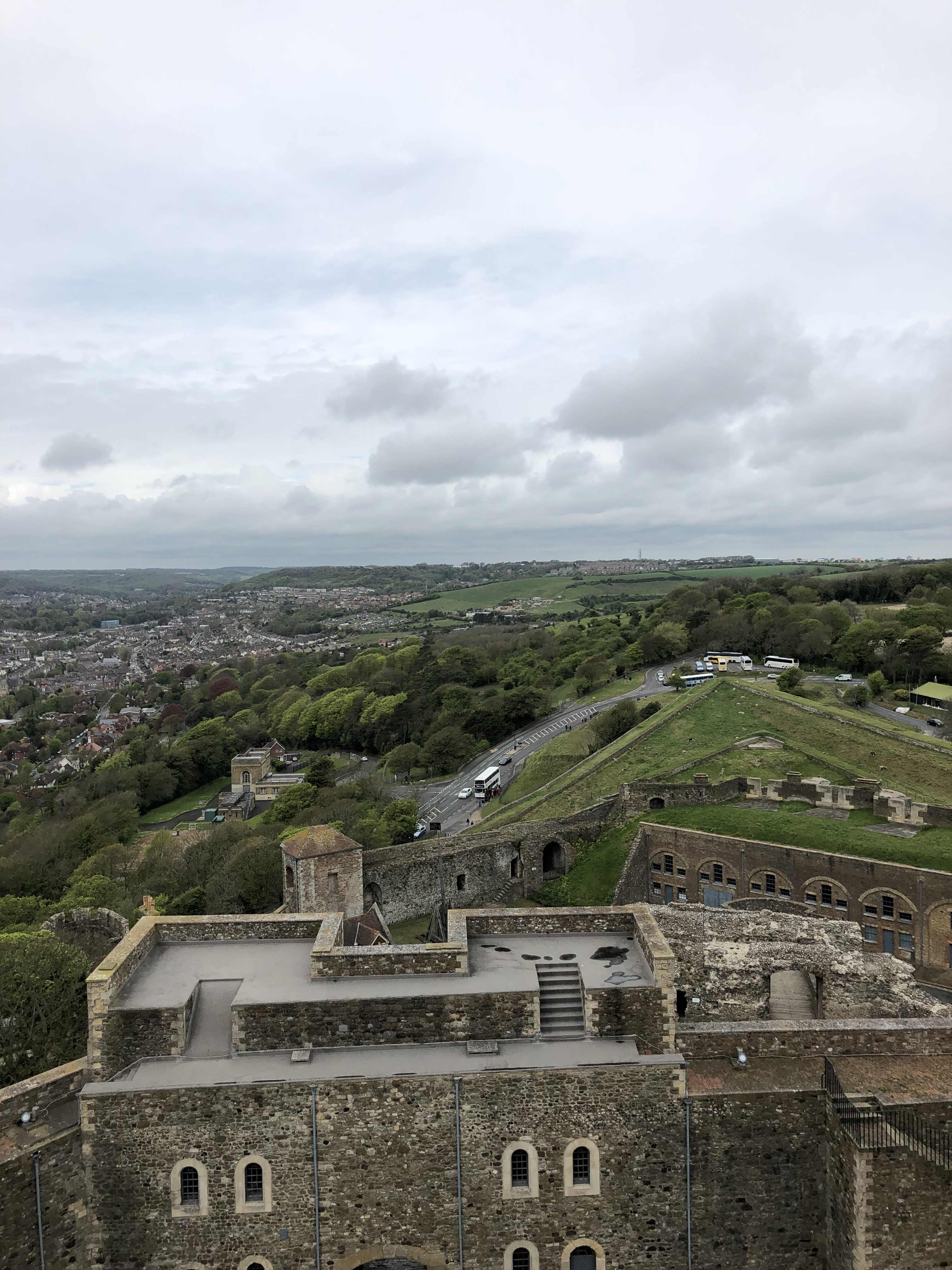 You can also tour some more modern aspects of the castle including the war time tunnels which played a role in WWI and WWII, in particular the rescue at Dunkirk. The walls surrounding the castle are still equipped with some guns from the wars, which you can walk around and get a closer look at. There is also a diner in the old mess hall which has excellent food and tea. Which makes the perfect afternoon stop, especially since the castle is so big it can literally take you all day to see everything.

We only spent about half the day at the castle, because we knew we wanted to see the White Cliffs of Dover. Our inn owner had told us that you can talk from Dover to the next town down the coast, St. Margret’s Bay which is where Ian Flemming lived and wrote some of the James Bond novels. He also told us that there was a regular bus from St. Margret’s Bay back to Dover. So wet set off, after a delicious lunch at the castle cafeteria to see if we would actually find where to get onto the cliffs.

When we left the castle gates on a whim we decided to descend down a long flight of stairs that look as though it may take us in the right direction. And to our delight it opened up onto a very cute part of Dover next to yet another bombed out church. This church was St. James Church, originally a Norman building built in the 11th century. It was badly damaged during WWII and was set to a ‘tidy ruin’ and left as a nice little park space. 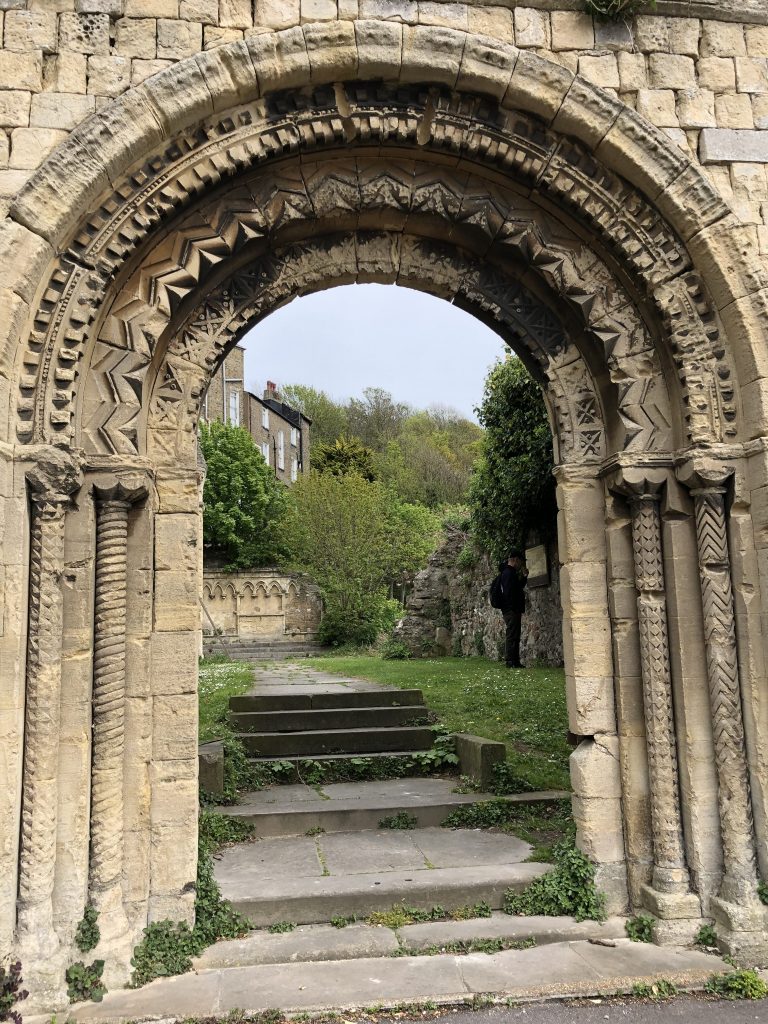 At St. James we turned left, hoping we would come across a view of the cliffs and we were again not disappointed. We found a lovely little row of colorful houses tucked up against the cliffs which the castle sat on. We could even see one of the platforms that we had been on earlier when we exited one of the tours. We kept on this path and eventually there was a small sign indicating we should follow the sidewalk to the left and hug the cliffs. Which makes sense since there was little where else to go unless you were a large truck headed to the port. 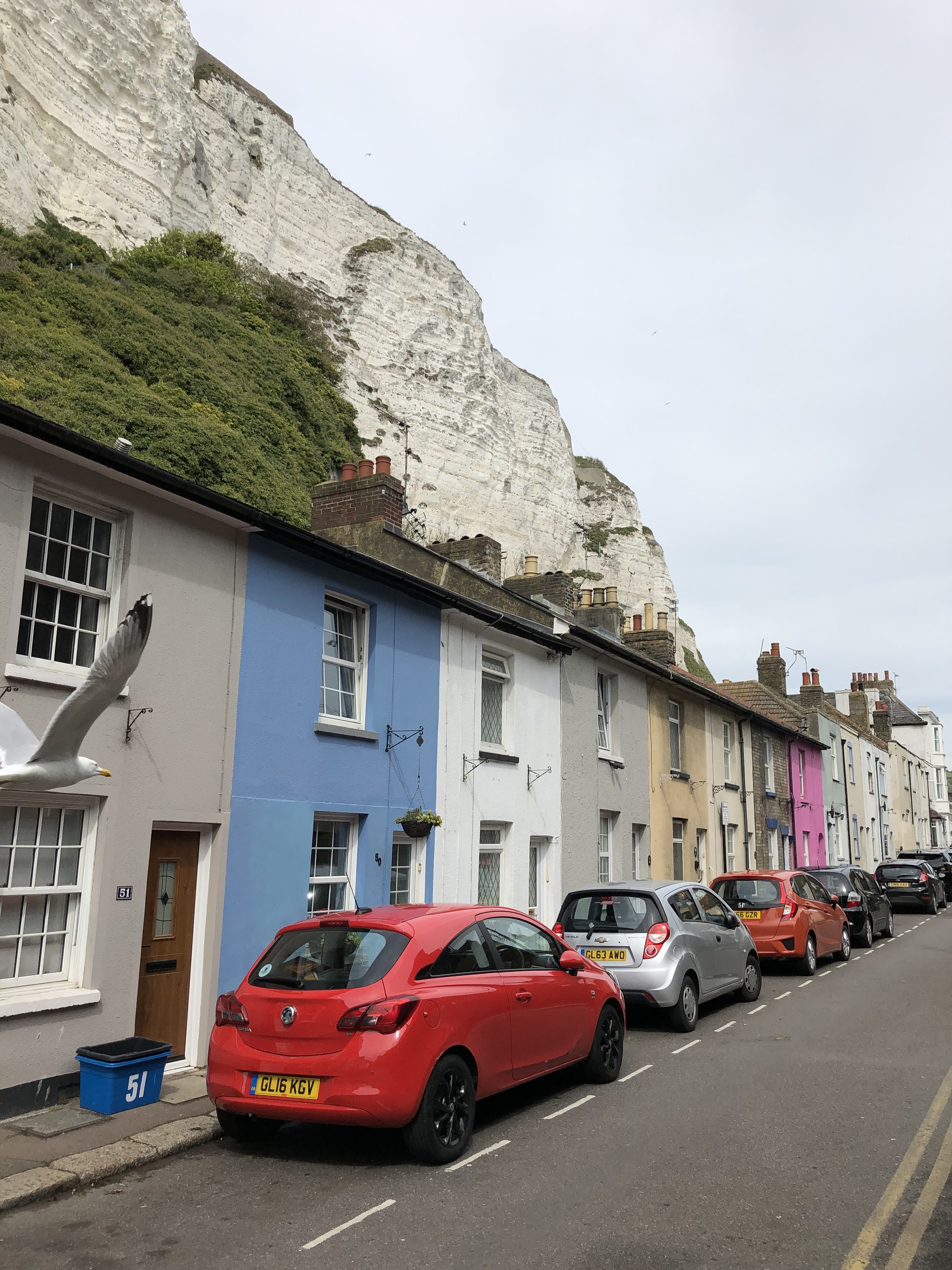 We continued climbing and hoping we were on the right path. We knew we were headed the right direction but there was little evidence that we would actually get up on the cliffs at some point. But our gamble paid off and before long we were up on the cliffs walking along in the sunshine. I think for both of us this was the highlight of the trip. We couldn’t have asked for better weather, you could see all the way across the channel to France and there were hardly any people about. We chose to trust our inn owner and walk to the next town, we figured if nothing else we could find someone to call us a cab. 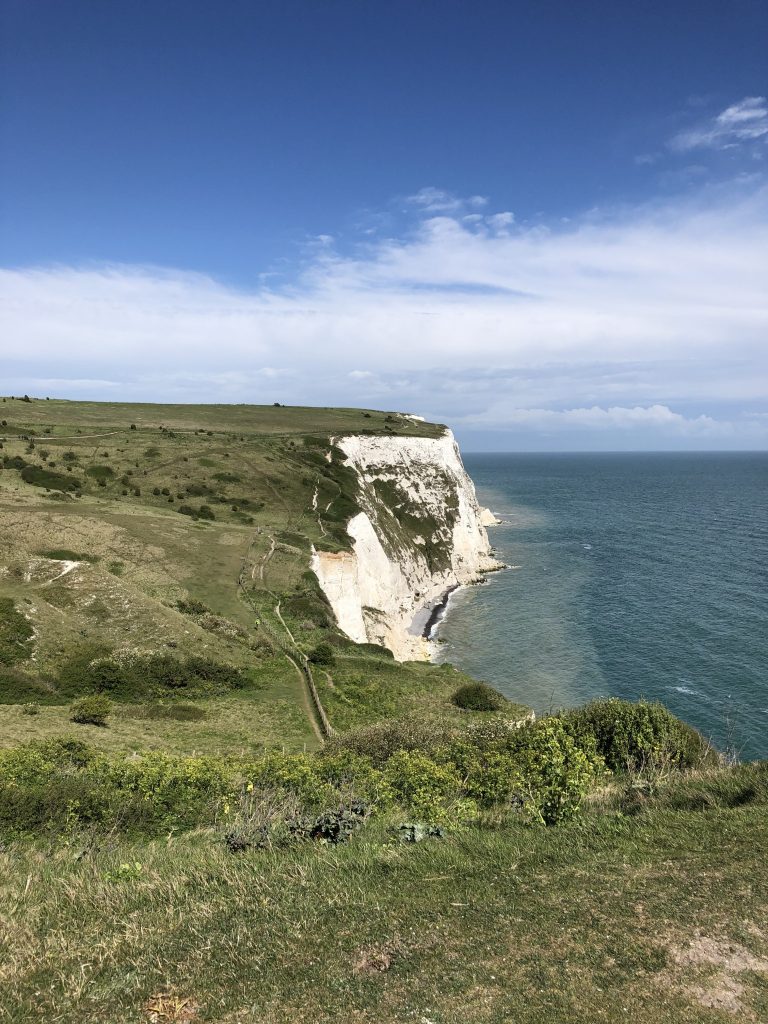 The White Cliffs of Dover are often mentioned in movies and novels of war, or hardships. They are called out as the symbol of returning home and you can see why when you see them in person. The massive chalk cliffs are so bright against the green hills and bright blue water that they stand out like a beacon, if we could see the low lands of France from where we stood I can only imagine how bright those cliffs were when looking at them across the water. I should warn anyone thinking of taking this excursion that we were not really properly prepared, and even though it is an incredibly easy walk, it would be best to be fully prepared with proper gear, snacks and water.

That being said despite not being fully prepared nor having any real sense of where we were going we continued on. We reached St. Margret’s’ Bay in what seemed like very little time but was really a couple hours. And I may have panicked a bit. I was thinking a large open town, but rather it was full of trees and tight winding streets, luckily about the time my panic set in with regard to how to find the bus station The Pines Garden Tea Room popped up in our path and I jumped at the chance to ask for directions. I asked the nice women at the counter and then a kindly voice behind me said “we will run you up there if you would just sit a moment and have tea with us”. Alan and his wife (we call her Mrs. Alan because we regretfully forgot her name), had no reason what so ever to offer to offer two strangers a ride but did so all the same. We sat with them a while as they told us about their lives in the area and working, then retiring from the port. They told us about stealing rocks from the beach to build an extension on their home. They told us about their kids, and their dog that they recently lost. And then they drove us to the bus station the whole time apologizing that they couldn’t run us all the way to Dover, but their son was due any minuet from out of town. We were a little sad to see them go, and I regret not having a business card on me to stay in touch. 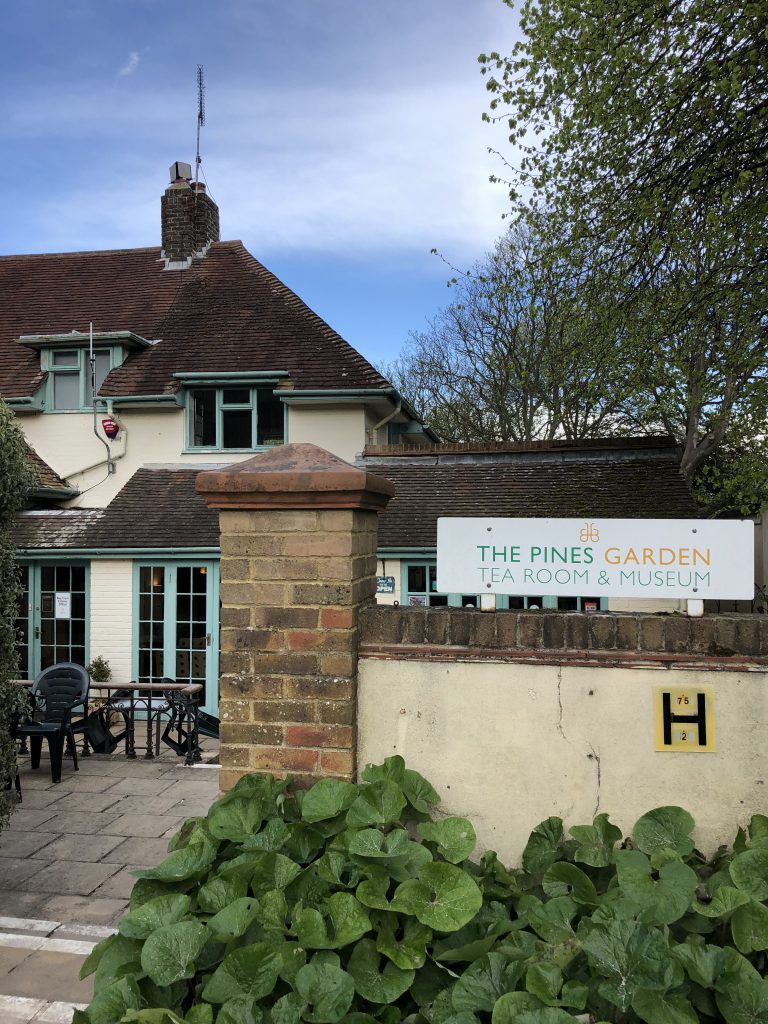 The bus did eventually come but I wouldn’t call once an hour ‘often’. So if you plan to walk and ride back as we did I would suggest checking the schedule before hand. It is 4 pound 50 to ride back, they only take exact change. But it is a really nice ride and drops you straight back in central Dover. Looking back our full day in Dover both Dover Castle and Walking the White Cliffs of Dover were probably the highlight of the trip, even though everyone we told about our plans to visit thought we were crazy. Sometimes the most unexpected and least assuming parts of your journey can be the best. 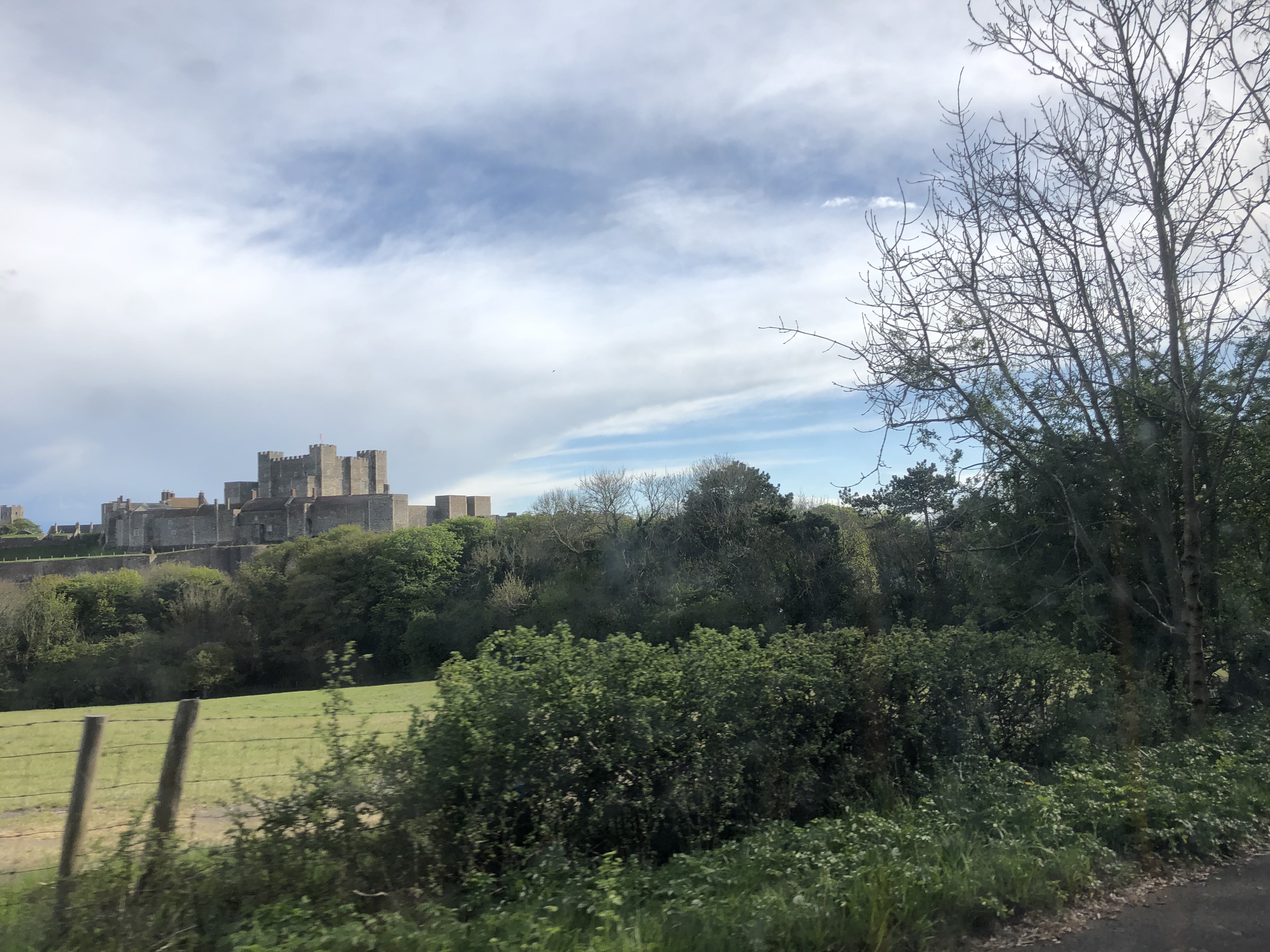