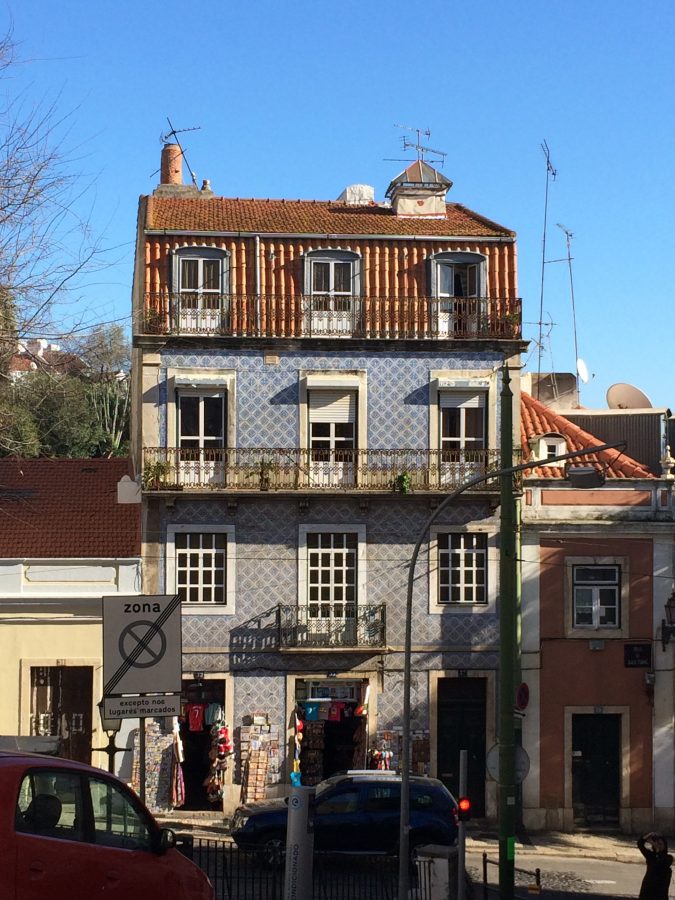 If you have seen even just a single image of Portugal, chances are it had azulejo in it. Azulejo is a form of painted glazed tile, whose history dates back to the 13th century. These beautiful painted tiles are synonyms with the country and Lisbon in particular. And for good reason, they are stunning. 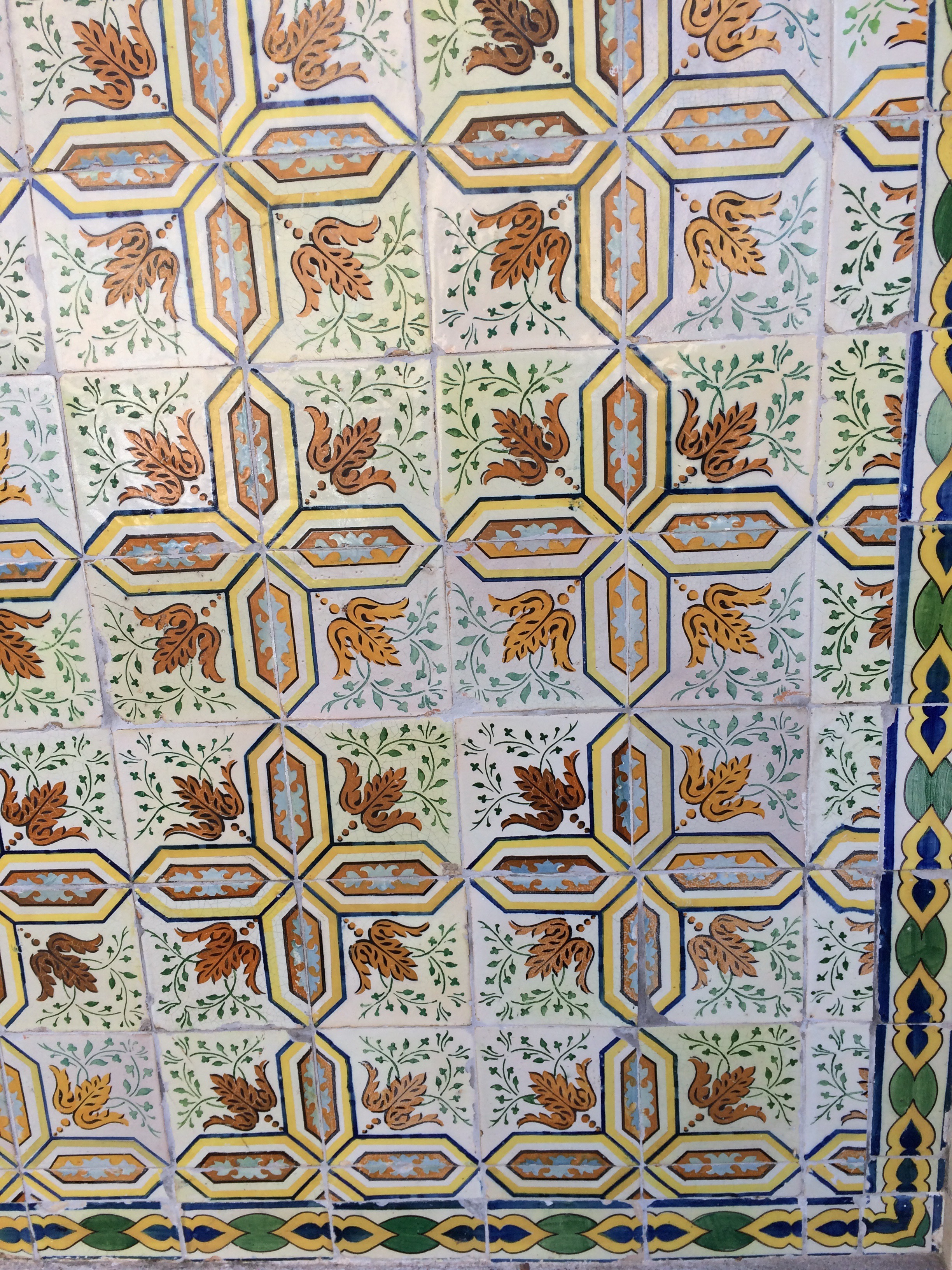 My research so far seem to point to Seville Spain being the epicenter of the Azulejo movement in the 13th century, at the time it was heavily influenced by Moorish culture and as such the tiling technique were perfected here.  King Manuel introduced the techniques to Portugal after a visit to Seville and the rest his history. 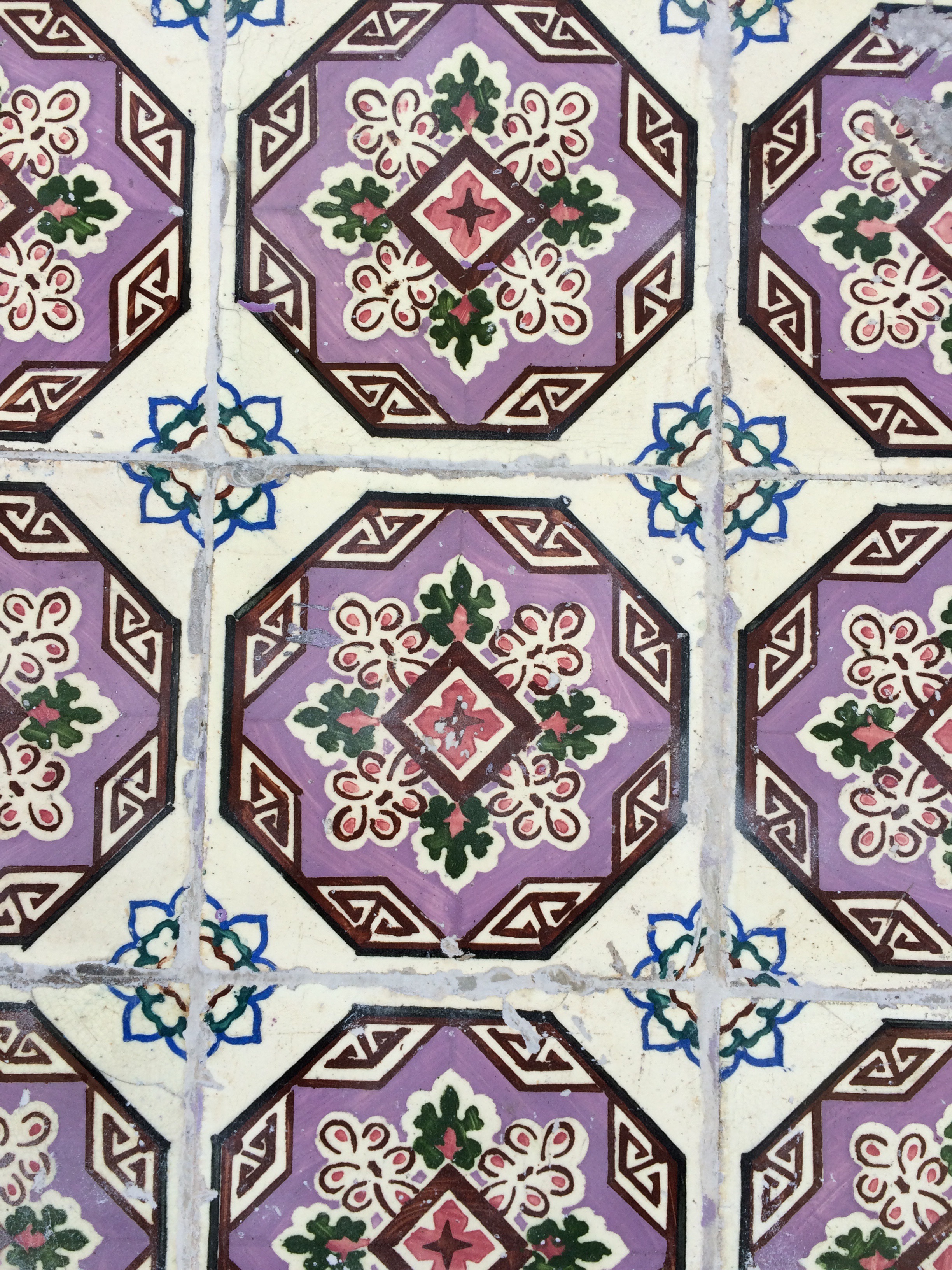 The Sintra National Palace has an impressive display of both indoor and outdoor tiles. We wound up skipping  it because of sick family members and a want to get settled in Lisbon before Christmas but I would love to go back and visit. There is also a tile museum in Lisbon we didn’t make it to that would probably worth the time if you had an interest in ceramics and history. 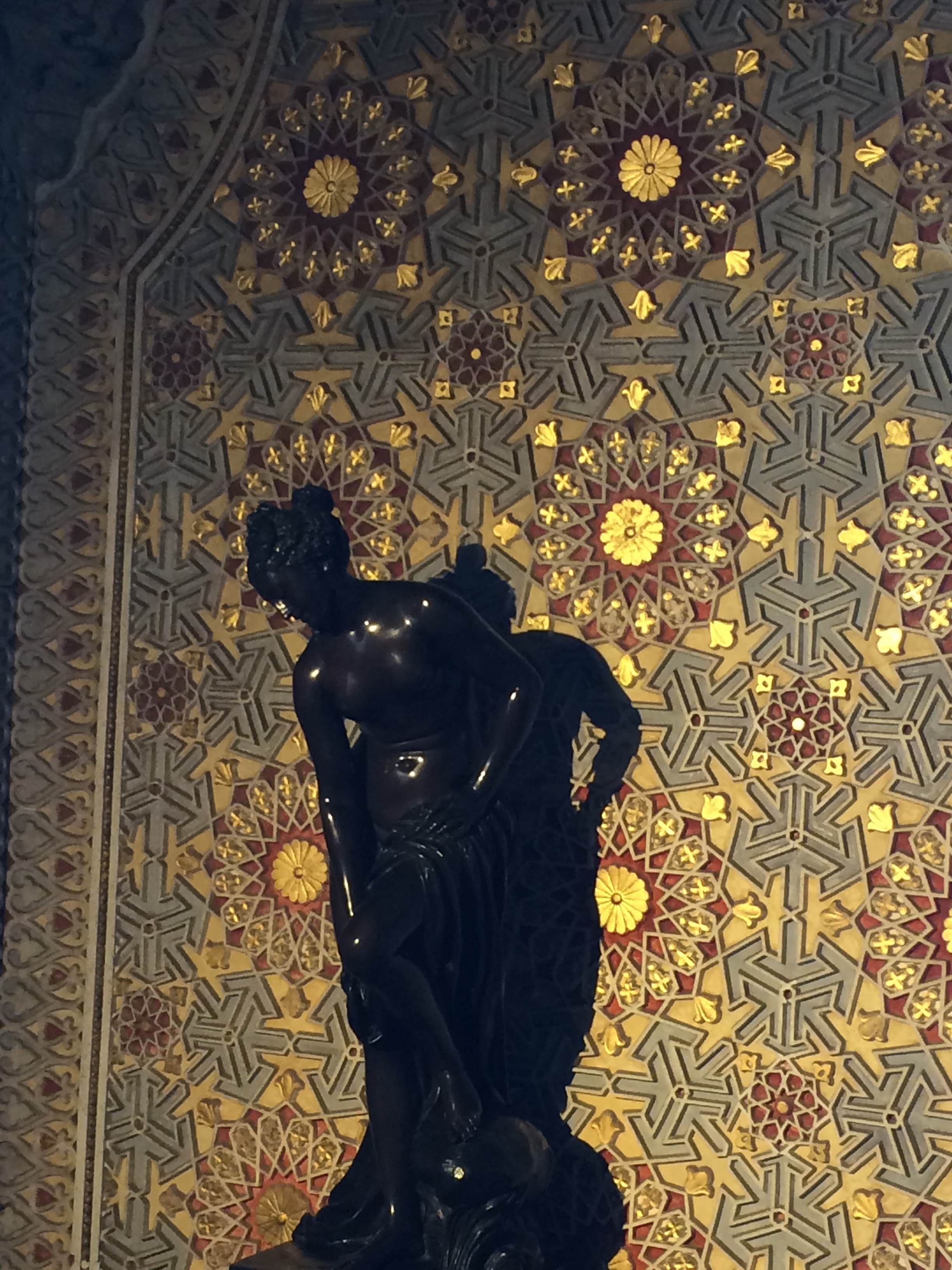 My favorite tiles I saw in Portugal were at the Pena Palace in particular the gold tile in picture above. The room was dark so the picture is terrible but I was memorized and wound up holding up a long line of tourist trying to take pictures of it. 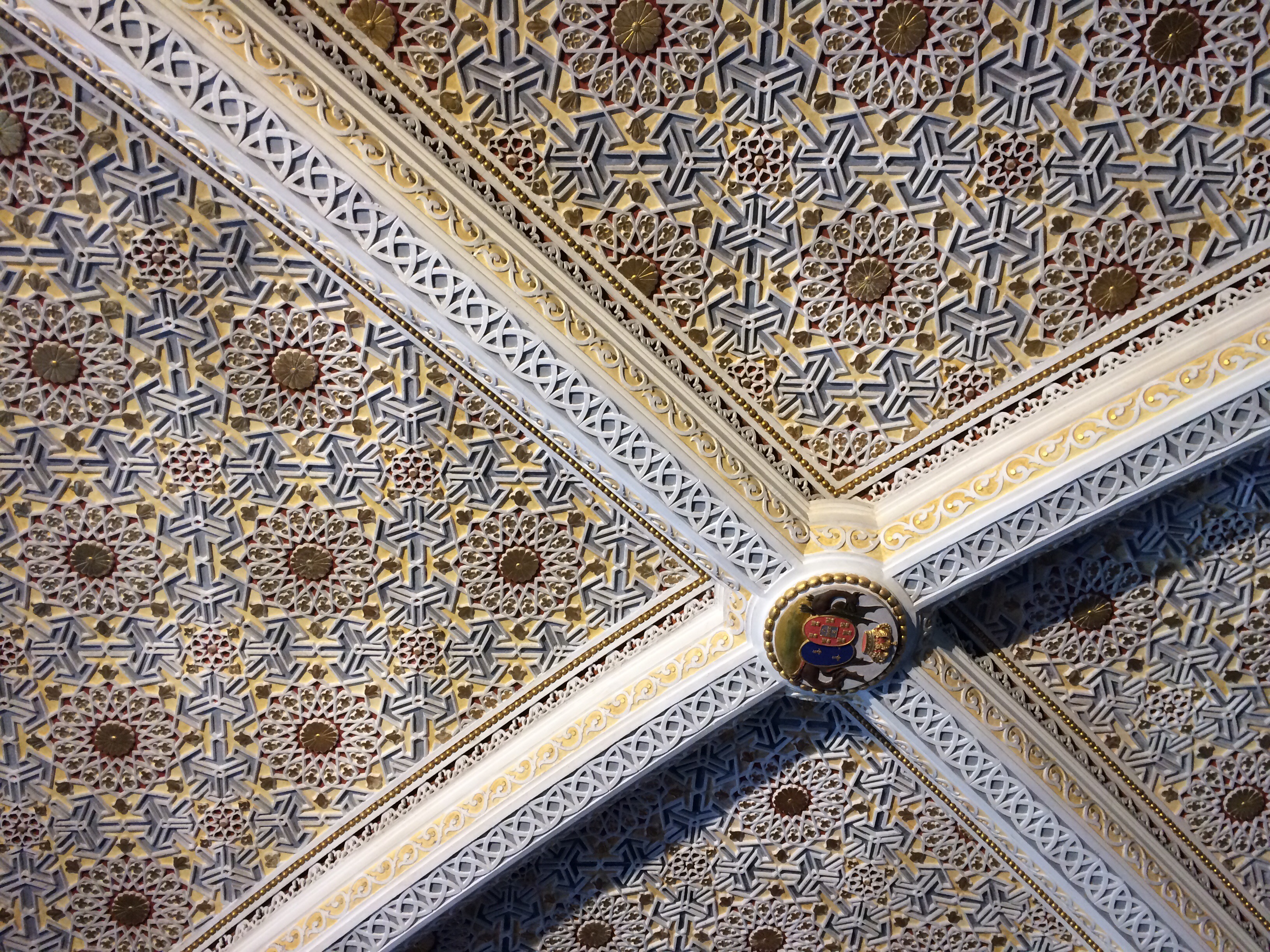 A slightly better picture of the gold tile seen above, but it doesn’t show off how vivid the gold was.  I just want to touch it. Which is frowned upon and often ends in being ejected from the building. So I resisted, this time… 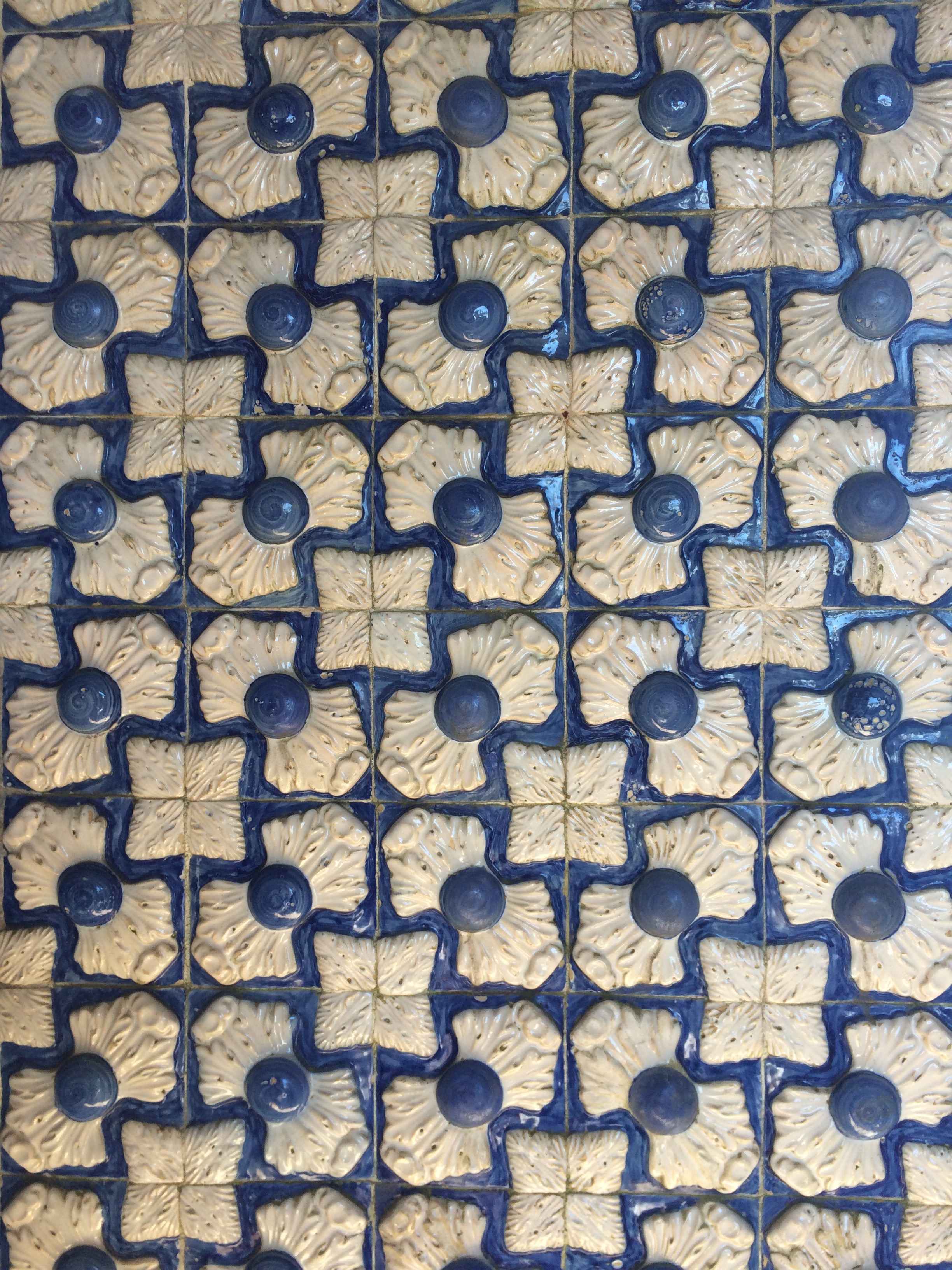 Pena also boasts a large college of relief tiles, I couldn’t find any information on the history of the relief tiles, though given when Pena was built I would imagine it was all the rage in the 1800s. 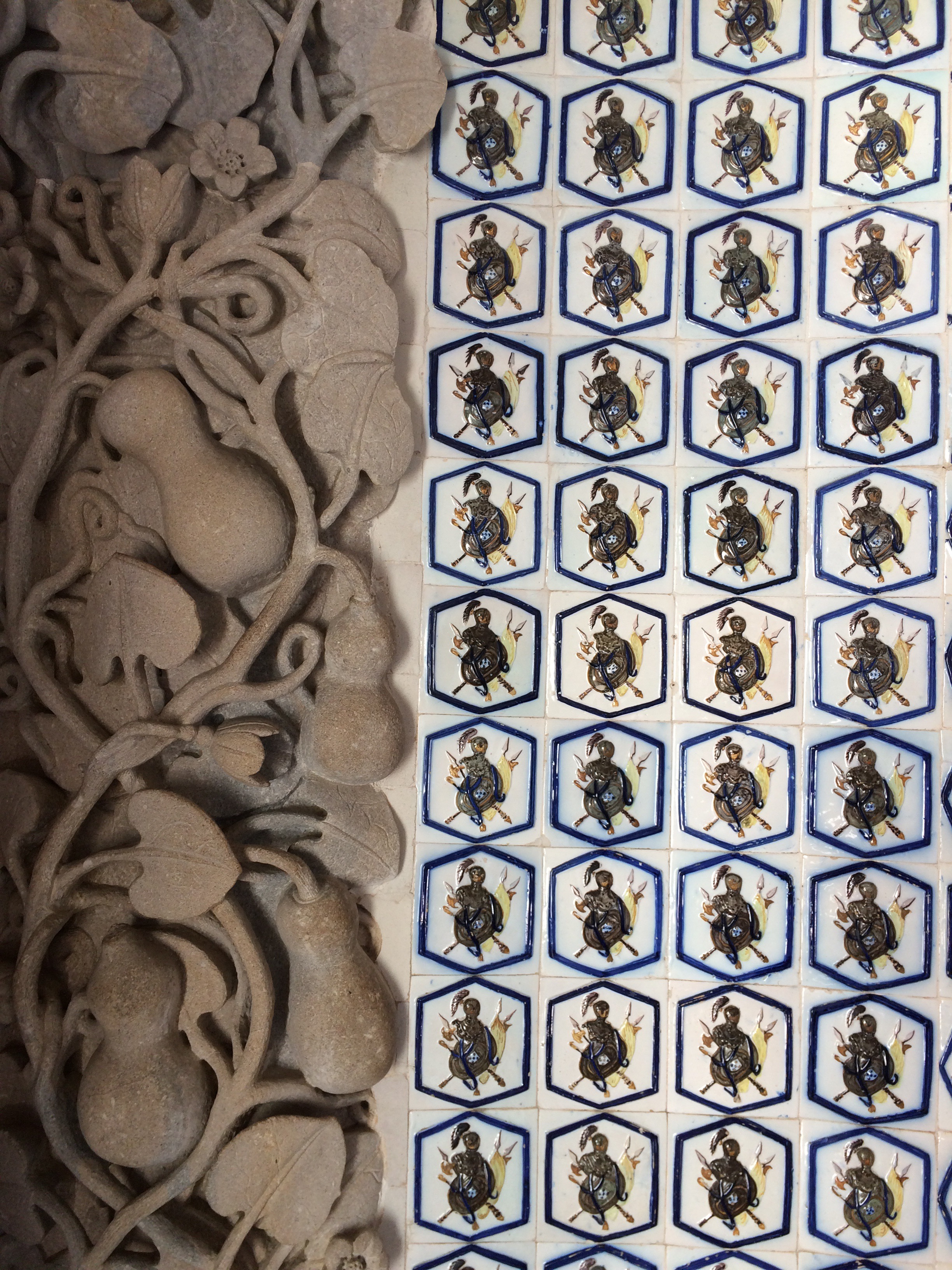 Where as the more standard and repetitive tiles were more common closer to the 15th and 16th centuries. 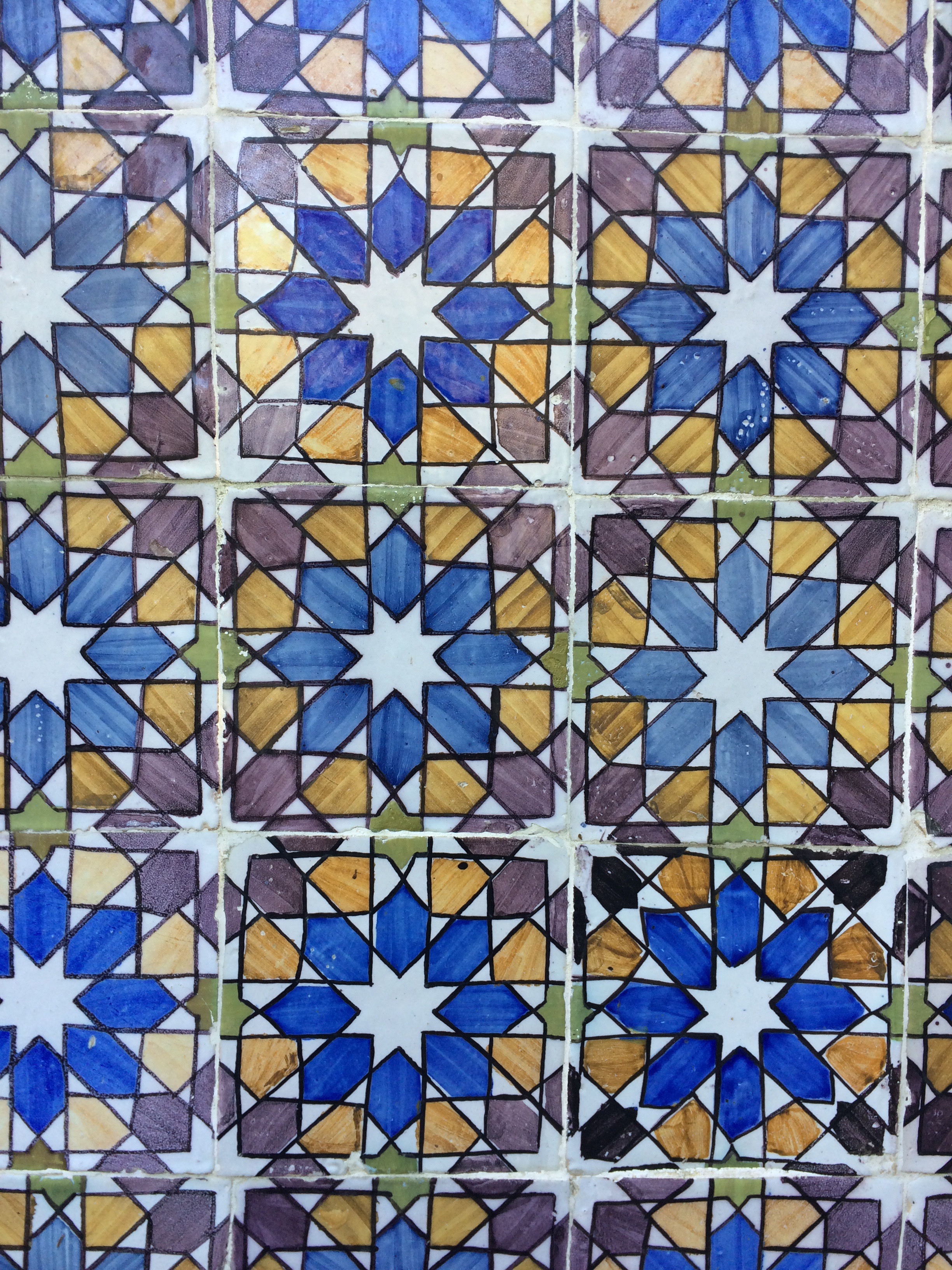 At various points in history production of tiles moved out from Spain and Portugal to their colonies, a large amount of which landed in Brazil. 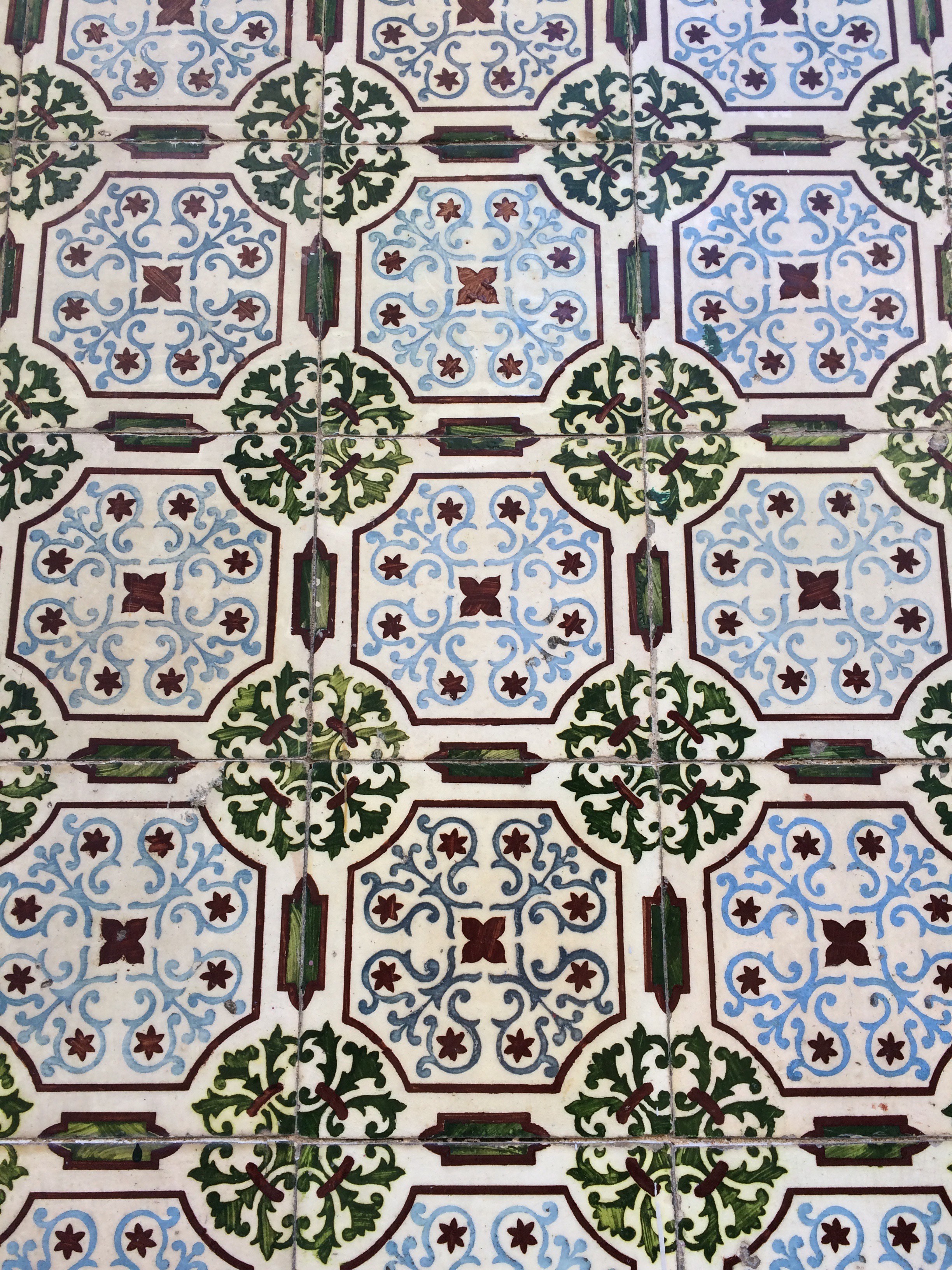 Where as the blue and white tiles were more likely from the 18th century and of Netherland origin. 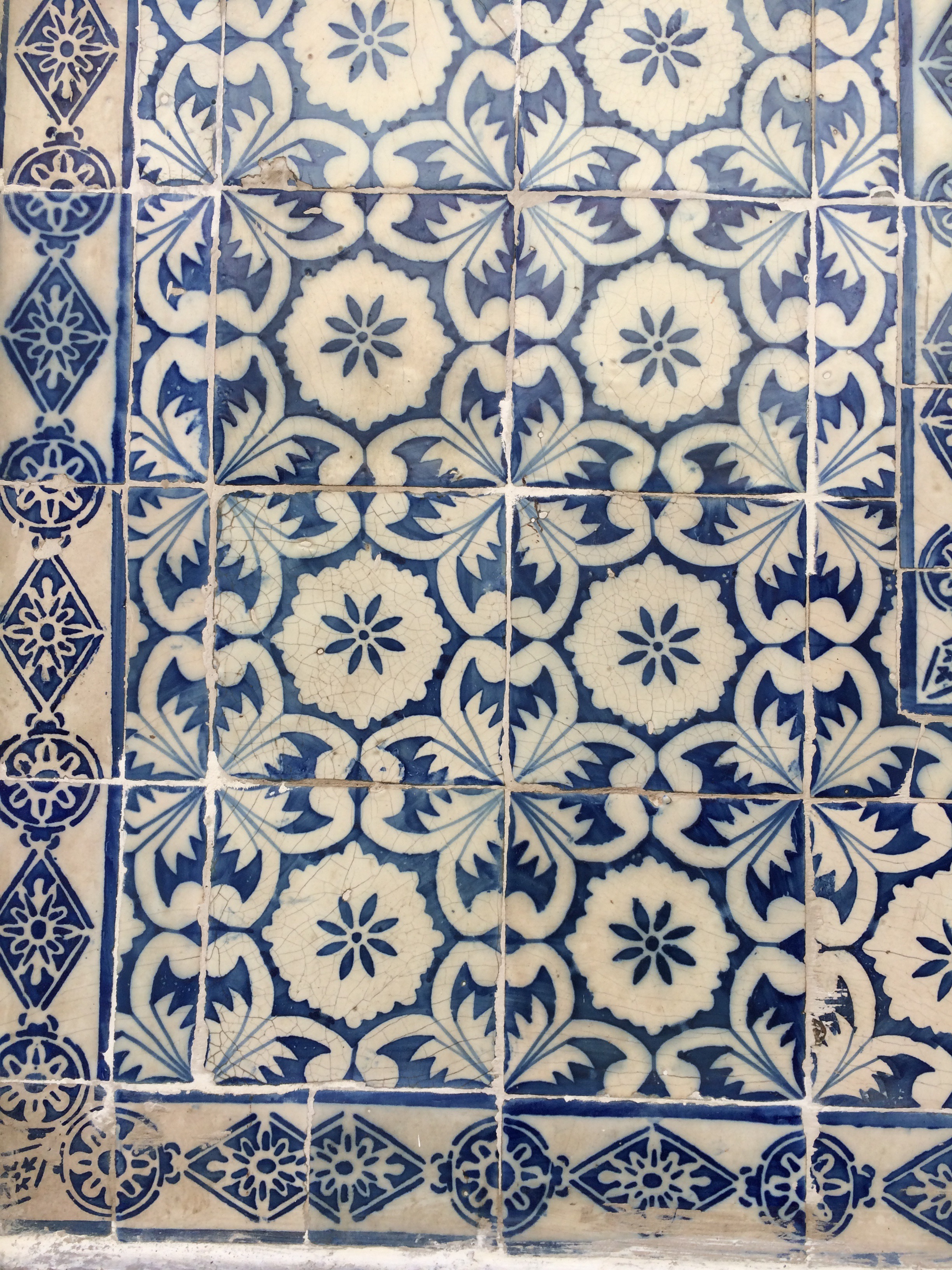 And the blue and white tiles with scenic motifs are possibly even newer and mass produced with industrialized methoods in the 19th century. 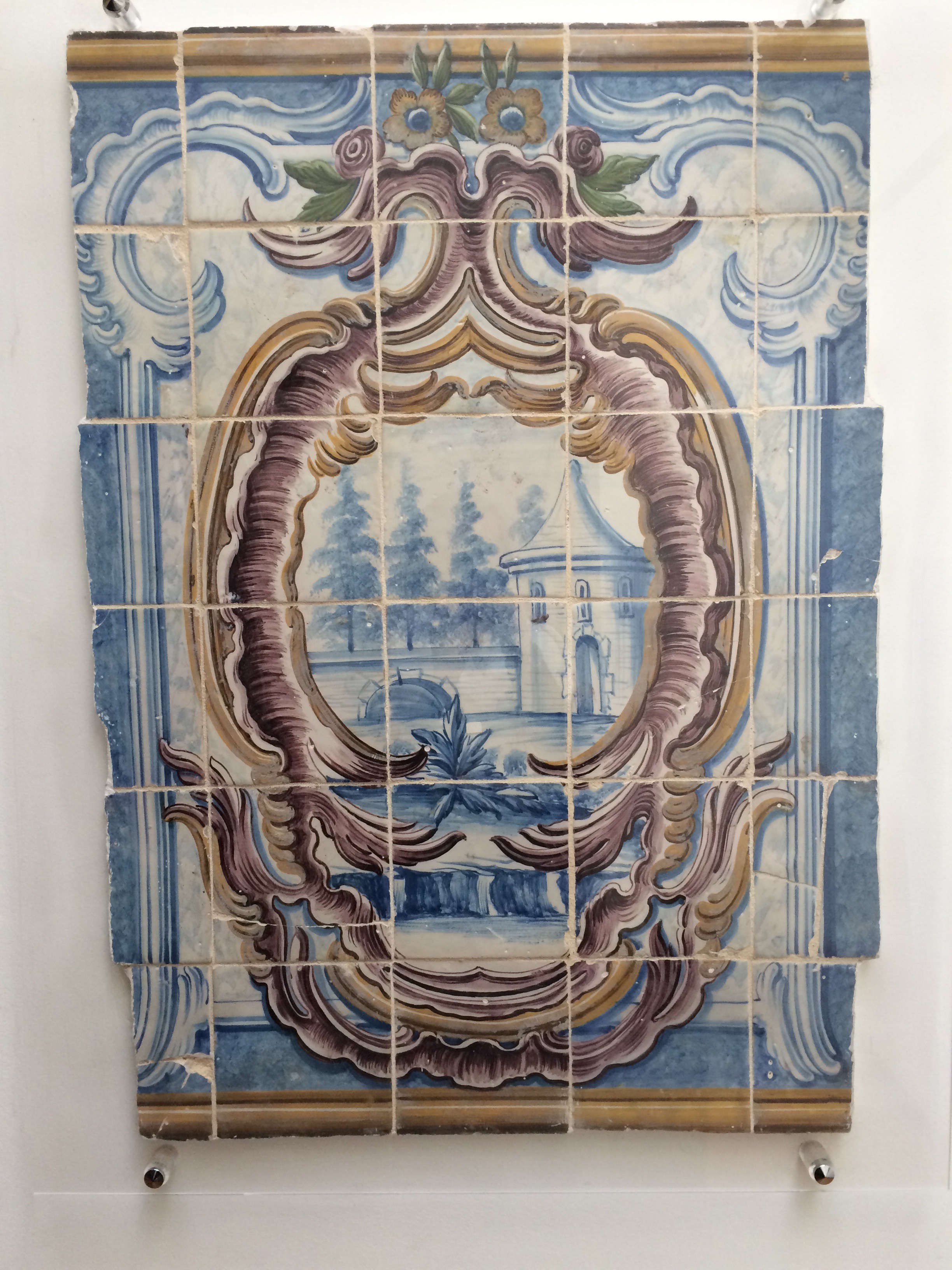 If you are really intrigued by the history and tile facades Lisbon Lux has a nice round up of the prettiest facades in Lisbon. Complete with addresses for each building so you can go see them for yourself if you are ever in the area. 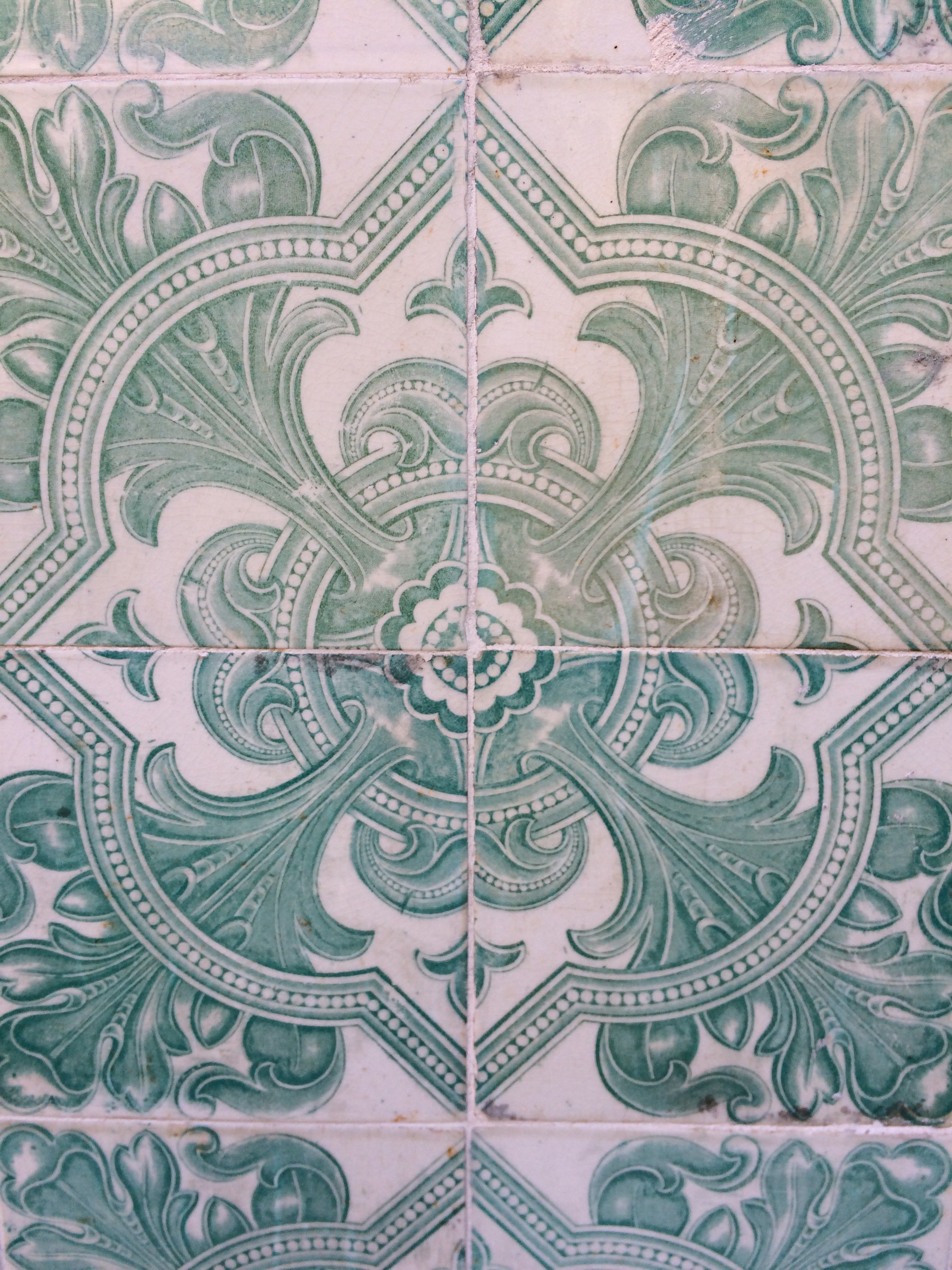 Lisbon Lux also has a nice round up of the best tile panels in the city, if you are more interested in the mosaic picture rather than the repetitive patterns.